Migrants in Turkey have accused Greek police of beating them and forcing them to strip off in a freezing no-man’s land on the border where thousands are trying to reach Europe.

Turkish state-owned broadcaster TRT published photos of shirtless migrants warming themselves around a fire near the Greek border, with some displaying scars on their backs.

Some of the migrants claimed that Greek police were repelling them with ‘military stuff’ on what TRT described as a ‘site of violence by Greek security forces’.

Greek police have fired tear gas, stun grenades and water cannons to repel people trying to cross the border, but deny claims that they have wounded or even killed migrants.

Meanwhile, other migrants were voicing their fury at Turkish president Recep Tayyip Erdogan after he gave them false hope of a new life in Europe by allowing them to leave Turkey, only for their path to be blocked by Greece.

Erdogan’s gambit to ‘blackmail’ Western leaders over the war in Syria has sent thousands of migrants heading to the Greek border in an effort to reach the EU, but most have been turned back. 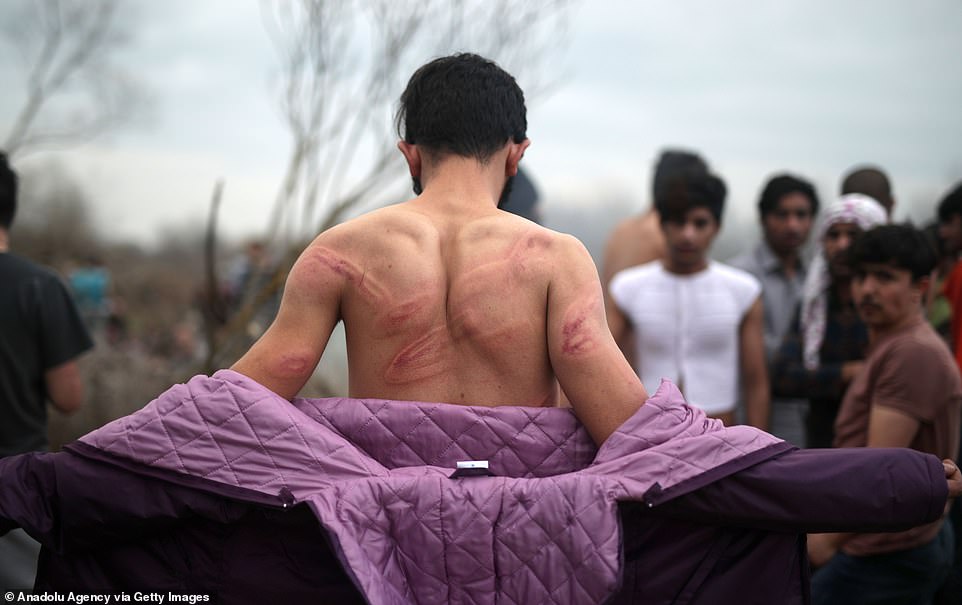 A migrant displays injuries on his back near the border between Turkey and Greece today, with Turkish state-owned media accusing Greek authorities of wounding migrants and forcing them to strip off 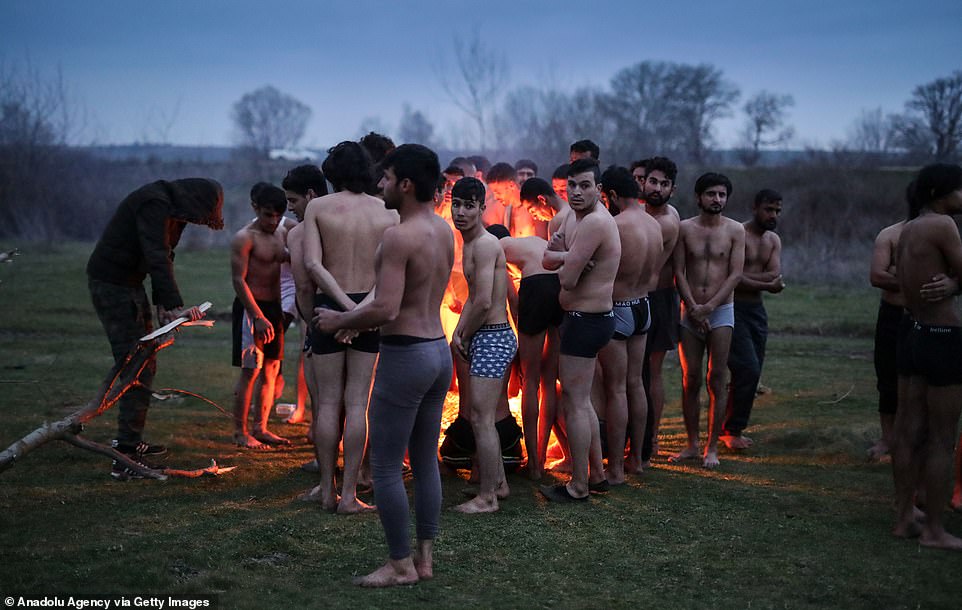 Pictures published by Turkish media, such as this one, show shirtless migrants warming themselves around a fire in an area of no-man’s land near the Greek border 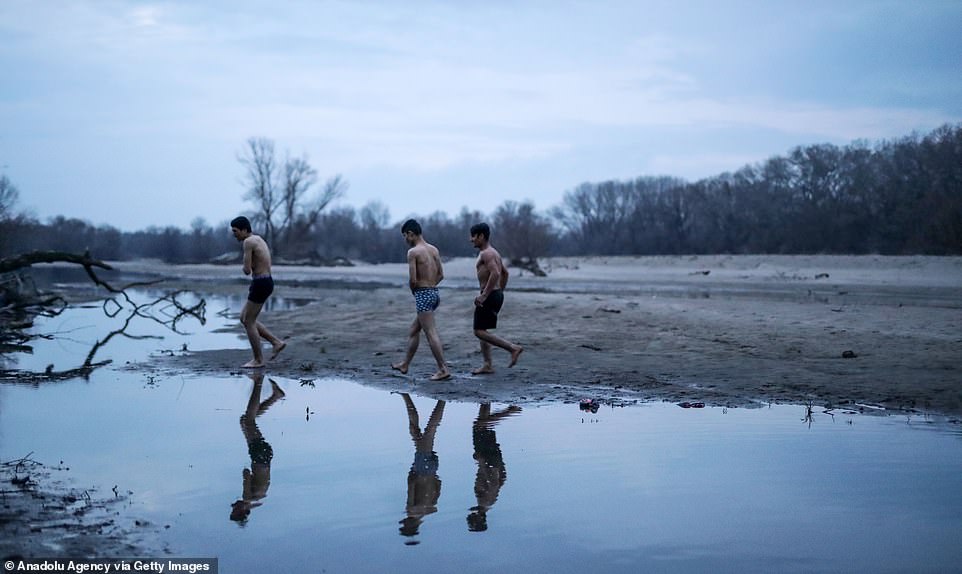 Migrants such as these, pictured near the Evros River this morning, have been trying to enter Greece since Turkish leader Recep Tayyip Erdogan abandoned a deal with Europe to keep millions of refugees on his territory

Brief clashes broke out today as Greek police fired tear gas at migrants trying to break through a border fence, who responded by throwing stones.

Calm was quickly restored, with hundreds of migrants sitting peacefully in front of the gates, chanting ‘peace’, ‘freedom’ and ‘open the gates’.

Makeshift camps for thousands of migrants have sprung up around the border, with Turkey deploying 1,000 special operations police to prevent Greek authorities from pushing the migrants back.

The pictures published by Turkish media showed some of the migrants huddling around a fire last night after they were allegedly forced to strip off by Greek police.

Some migrants had severe scarring on their backs, although there was no way of proving whether they were wounded by Greek authorities.

One migrant was quoted saying that Greek police ‘forced us to take off our clothes’ while another held up a grenade thrown by Greek authorities, calling it ‘military stuff’.

Turkey’s foreign minister has claimed that than 130,000 people had crossed into Greece since February 27, when Erdogan finally went through with his repeated threats to open the border.

There was no evidence to support the number. Although hundreds of people have managed to cross, most appear to have been caught by Greek authorities.

Many asylum-seekers have been camping out on the Turkish side despite Greek insistence that its border is closed.

Reporters have been kept away from the border area on the Turkish side but saw at least one bus full of people leaving the area this morning. It was unclear where the bus was headed. 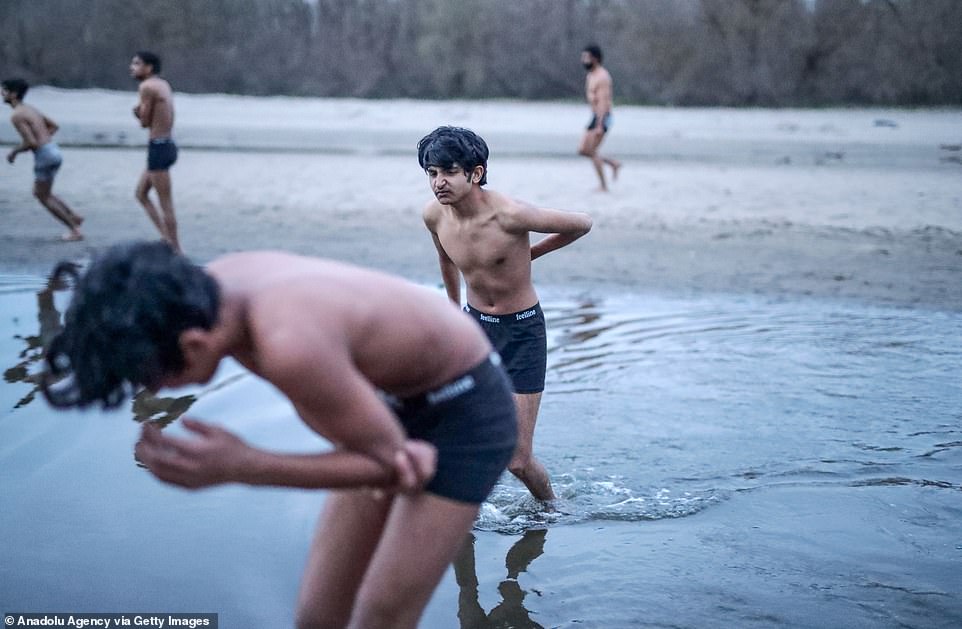 Migrants near the Evros River today where Greece has been repelling thousands of people trying to enter the EU from Turkey, although Greek authorities deny claims that they have injured or even killed migrants 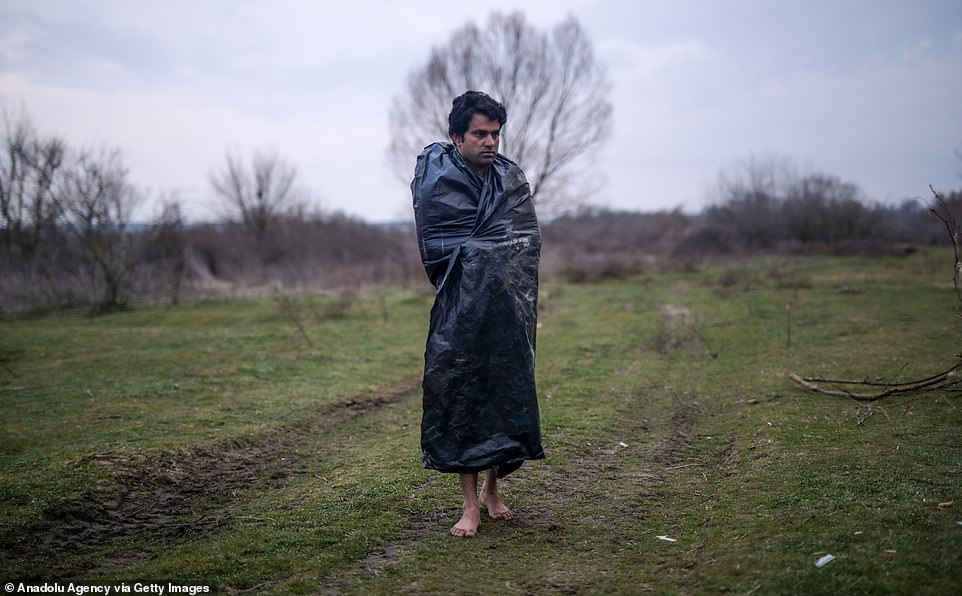 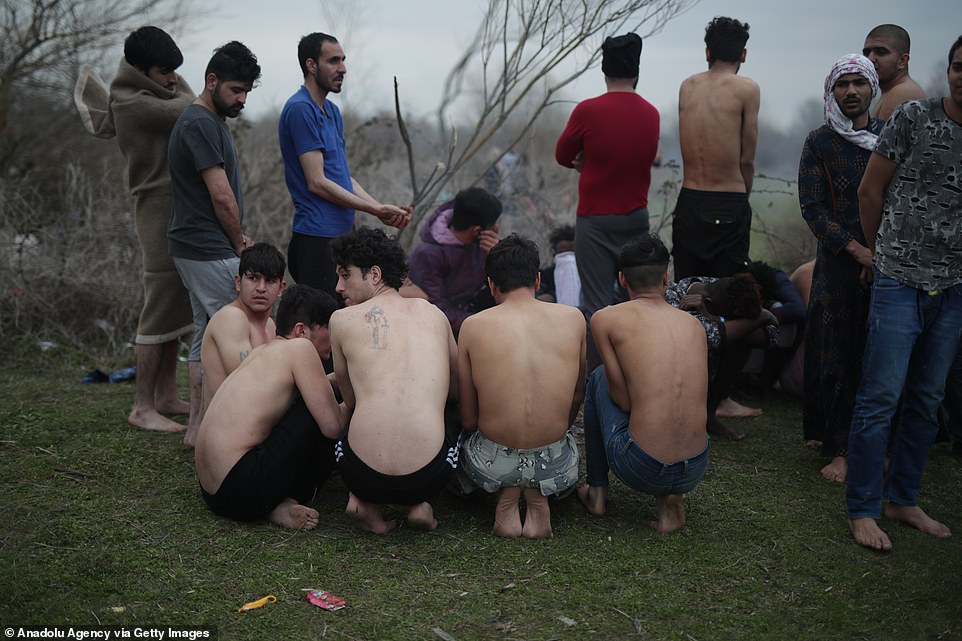 A group of migrants – some clothed, others shirtless – stand and crouch near the border between Turkey and Greece today

Greece’s defence of its border – backed by the EU which has vowed to ‘hold the line’ – has sparked growing anger from migrants who feel they were misled by Turkey.

Mohammad Omid, an Afghan who has been at the border for five days with his wife, said Turkish police told him to go there.

Syrian mother-of-four Sawsan al-Musawa left a refugee camp in eastern Turkey and headed for the Greek border after hearing that Erdogan had opened the doors.

Six days later, Musawa and her children, including two sons with cerebral palsy, were camping at a bus station in Edirne, tired, frustrated, and angry as their dream of a new life in Europe came to an abrupt end.

‘Why did he [Erdogan] do this to us if he knew Greece won’t let us cross?’ she asked, sitting on a rug near a pile of bags full of clothes for her sons.

Some migrants like Musawa say they had spent their paltry savings on the 800-mile journey from a refugee camp outside the city of Gaziantep to the border town of Edirne.

‘Erdogan is using us to press the EU for money,’ said Tamam Srmini, a 21-year-old from the Syrian city of Aleppo. ‘But we have to try. We have no choice. We have no future in Turkey.’

Others have started boarding buses to head back to places across Turkey where they had built temporary lives, doing menial jobs. 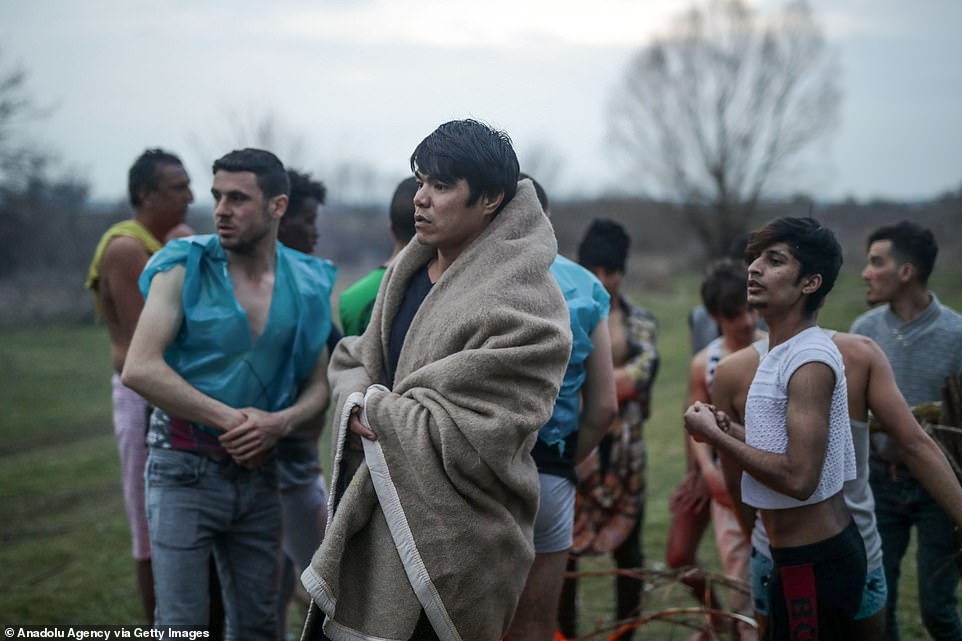 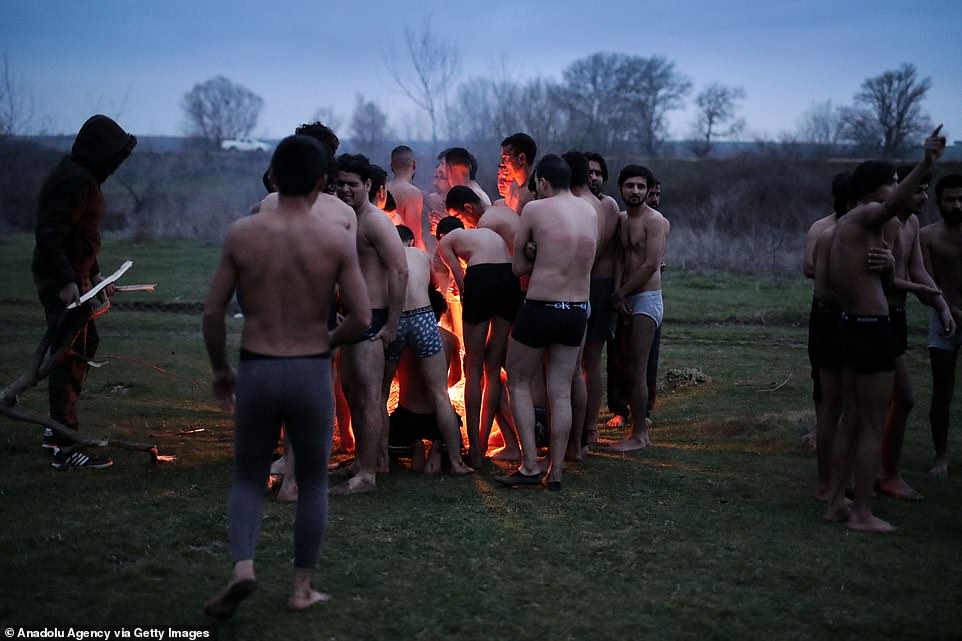 People stand around a fire, most of them shirtless and some in their underwear, near the Turkish border early on Friday 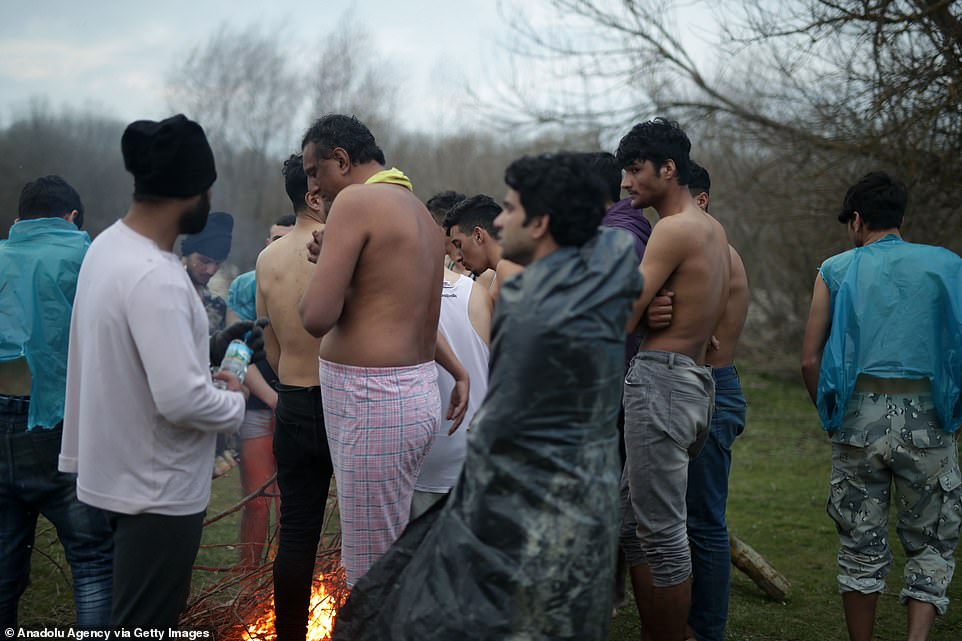 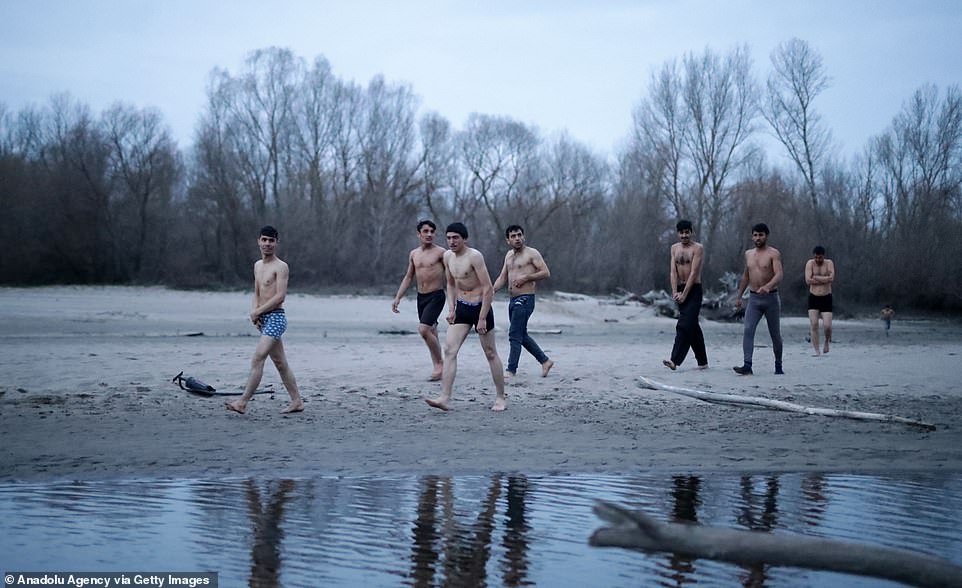 Speaking to a group of journalists on his return from a summit with Vladimir Putin in Moscow, Erdogan signaled that there would be no change to Turkey’s policy.

‘We don’t have time to discuss with Greece whether the gates which we opened are now closed. That business is over,’ Turkey’s state-run Anadolu Agency quoted Erdogan as saying.

‘Our gates are open. The refugees will go as far as they can. We are not forcing them to leave.’

Turkey is home to nearly four million refugees. Erdogan agreed to keep them on his territory in the 2016 deal with the EU which he has now abandoned.

Erdogan wants stronger support from NATO in the war in Syria, where his troops are backing rebels against a Russian-backed government advance in Idlib. Erdogan and Putin brokered a ceasefire there this week.

The EU agreed to the deal in 2016, offering Turkey financial aid to shelter the migrants, after a million people crossed into Europe at the height of the 2015 refugee crisis. 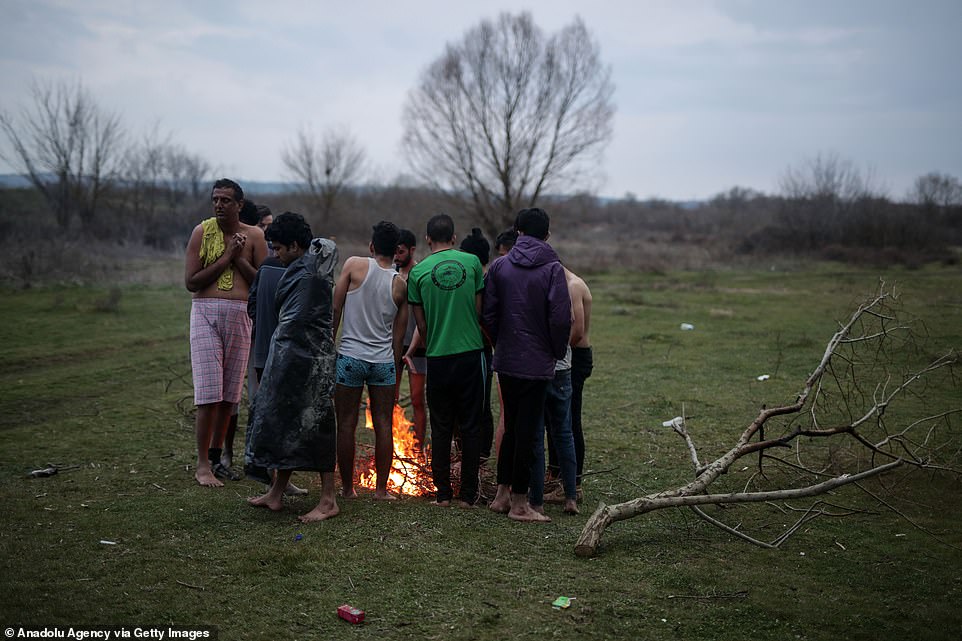 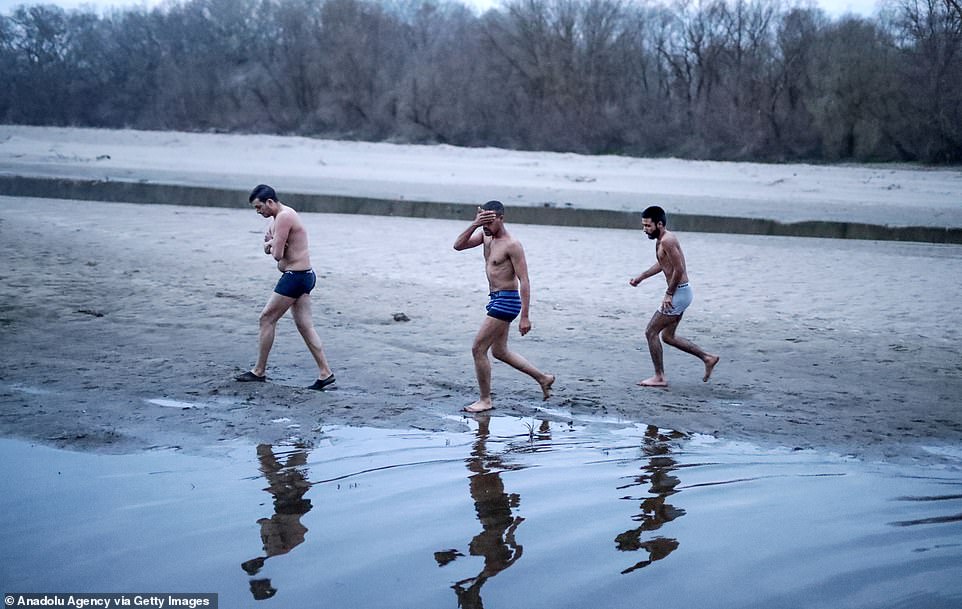 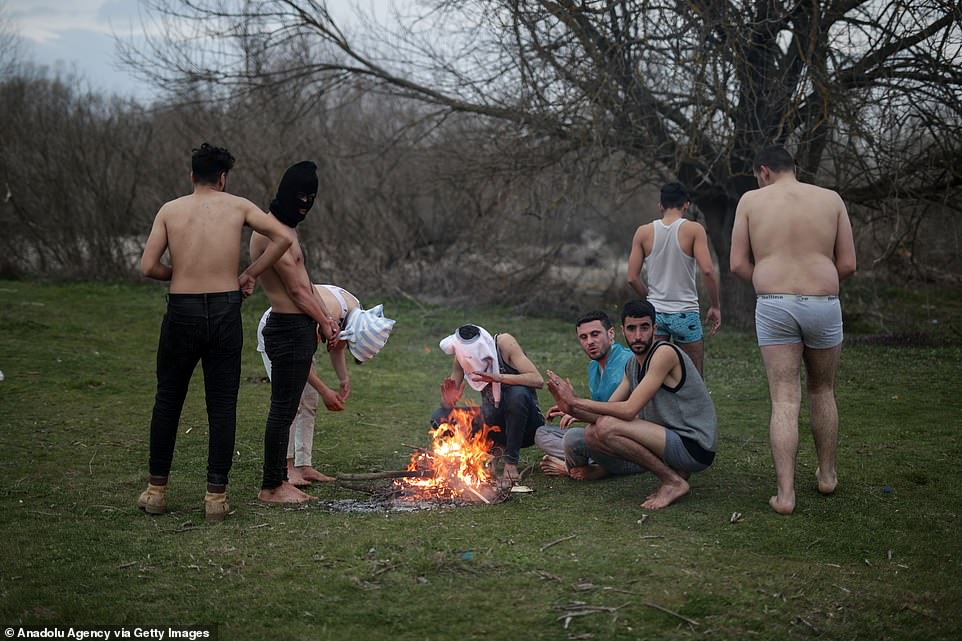 People stand around a fire, some of them putting on clothes, after travelling to the border in the hope of reaching Europe 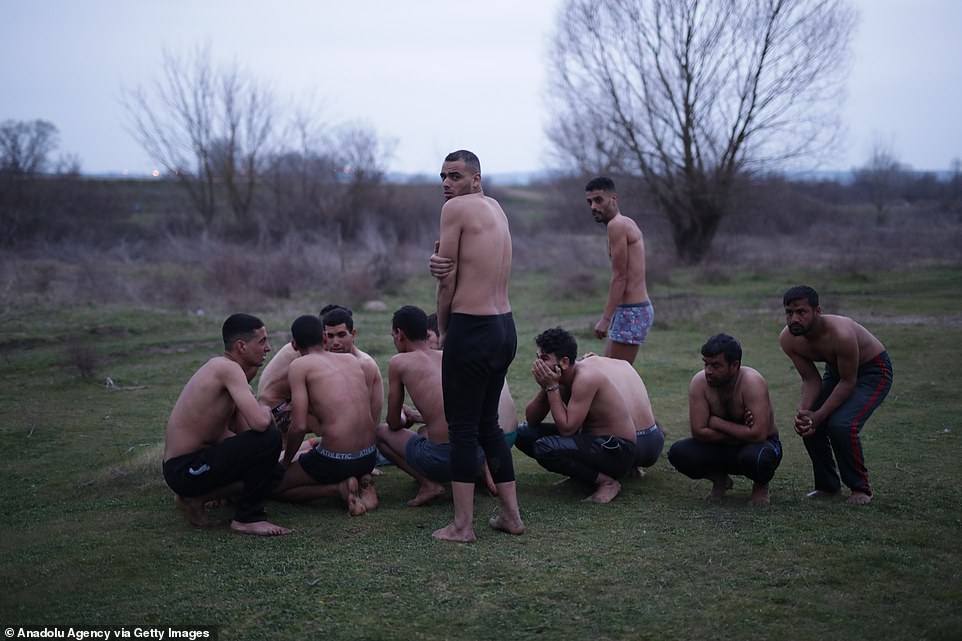 A man shivers as he stands near a group of crouching migrants near the Evros River, near the border town of Edirne today

European foreign ministers were today meeting in in Zagreb, Croatia for an emergency meeting on Syria and the immigration pressure at the Greek border.

‘Turkey is having a big burden, 4 million people, we have to understand that,’ Borrell said. ‘But at the same time we cannot accept migrants being used as a source of pressure.’

‘We should not react to the pressure that Turkey is exerting on us by agreeing to more money under pressure,’ he said.

Austrian Chancellor Sebastian Kurz has accused Turkey of carrying out an ‘organised attack on Greece’ and described Erdogan’s actions as ‘blackmail’.

Who is Thomas Markle, what did Meghan say about him and when was he married to Doria Ragland?