For the eighth time in seven years, an Andrews government minister resigned amid a scandal on Monday. Usually, a ministerial scalp puts a full stop on a political problem, but not on this occasion.

About four hours into the first day of five weeks of corruption hearings, veteran MP Luke Donnellan phoned Premier Daniel Andrews to resign after political assassin Anthony Byrne revealed Donnellan had put money into a branch-stacking “kitty”. If it were a test match, the score would be 1/1. 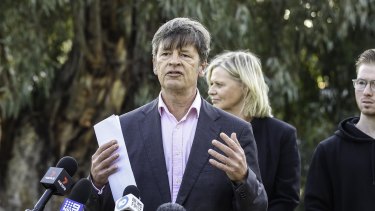 It was all there, revealed by Byrne who now faces the prospect of expulsion after he admitted he also paid for memberships when tied up in the Adem Somyurek-led operation he blew the whistle on.

When IBAC commissioner Robert Redlich asked how “nothing seemed to have altered” after Ombudsman Deborah Glass put the party on notice following the red shirts election rort, Byrne said the practices were enmeshed in the party’s fabric since the 1990s.

“I don’t think the system ever stopped,” he said.

The great irony is that many Labor staffers spent much of Monday glued to the inquiry live stream, doing very little work at all. These Labor people weren’t shocked by the substance of Byrne’s claims, but they were jolted by how unethical the party’s accepted practices sound when spoken aloud.

Labor wasn’t punished by voters for the red shirts affair in its first term, and there’s a chance the government could again skate through this episode because of Andrews’ indomitable popularity and an apathetic populace more focussed on getting out of lockdown.

But the Premier has less political capital to burn than he did six years ago. The weeks of hearings threaten to air the party’s dirty secrets daily just as the government was attempting to shift the narrative towards unlocking the state and getting crowds at the races.

He will be in a worse predicament if, as some MPs fear, party figures close to the Premier are accused of wrongdoing. Andrews has political cover because he dumped Somyurek and his acolytes, but day one of these hearings demonstrated the potential for damaging claims to be levelled at serving ministers.

The IBAC has already interviewed operatives from the Premier’s socialist left faction, and MPs from both factions continue to employ factional operatives to this day.

When Somyurek enters the witness box he will almost certainly rehash his allegations of branch-stacking against the Premier from their time as south-eastern party operatives before entering Parliament.

Another risk for the government is the potential that IBAC has found fraudulent use of multicultural grants by community groups to fund party memberships.

Monday’s hearings were instructive because Redlich and his counsel assisting gave an insight into possible recommendations from this inquiry. Redlich continually emphasised the problem of taxpayer-funded staff spending work time signing up members and doing other internal party work.

Victorian laws ban MPs’ staff campaigning in elections, but they don’t outlaw factional work. Politicos in both major parties believe it would be problematic if it became illegal for staffers to, for example, inform elderly branch members about an upcoming meeting.

It is questionable if these types of activities deserve to be prohibited. But evidence at Monday’s hearings show the current arrangements are being exploited, and the government will be hard-pressed to reject IBAC’s recommendations even if they make above-board political work impossible.

Donnellan is among a group of cabinet ministers – including Tim Pallas, Richard Wynne and Martin Pakula – who aren’t certain to stick around for a third term. More senior government members might go whenever the Premier decides to exit politics.

Donnellan’s resignation gives Andrews a chance to promote someone who will be a key cog in a third term, and someone who can freshen up an ageing cabinet, with Steve Dimopoulos, Lizzie Blandthorn and Anthony Carbines in contention.

Where they stand: lord mayor candidates pitch for the top job