A ravenous ‘giant’ seagull has been spotted brutally attacking a pigeon in a desperate fight for food.

The gull was captured viciously attacking the bird on the side of a road in Battersea, south London.

In the shocking footage the gull is seen pinning the pigeon to the ground and gripping the bird’s wing with its beak.

Onlookers managed to save the pigeon from its near-death experience by scaring off the seagull. 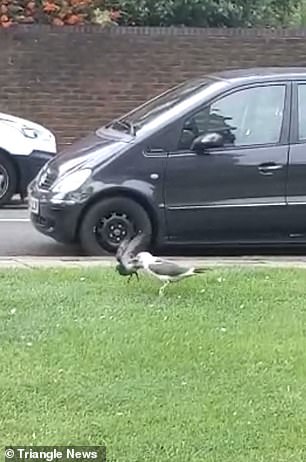 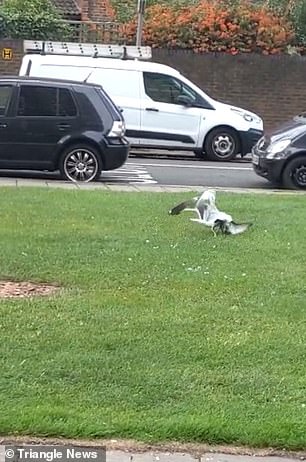 Under attack: The pigeon tries to escape from the vicious gull but is pinned to the ground on the side of a road in Battersea, south London, yesterday 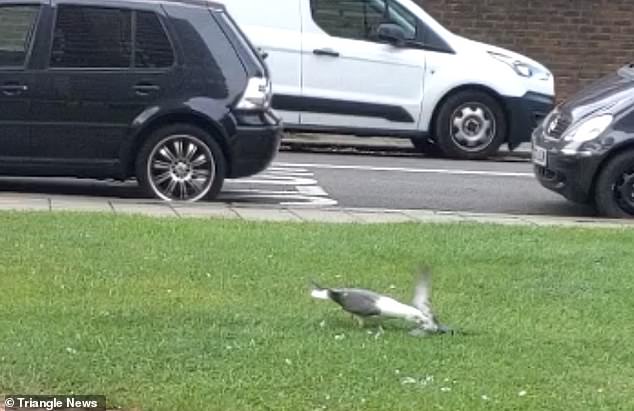 The seagull aggressively attacks the bird in a desperate plight for food. Onlookers rushed to save the pigeon from its death

Harriet Clugston, 26, rushed to the pigeon’s aid and said: ‘The beast was pecking the poor pigeon to death.

‘It was like nothing I had ever seen before. These giant gulls are savage and need to be stopped.’

‘Who are they going to attack next?’

The attack is the latest episode of a seagull epidemic that is blighting Britain’s summer.

Another seagull struck in Lincolnshire yesterday as Cleo, a Siberian-mix cat, had its tongue ripped out by the bird. 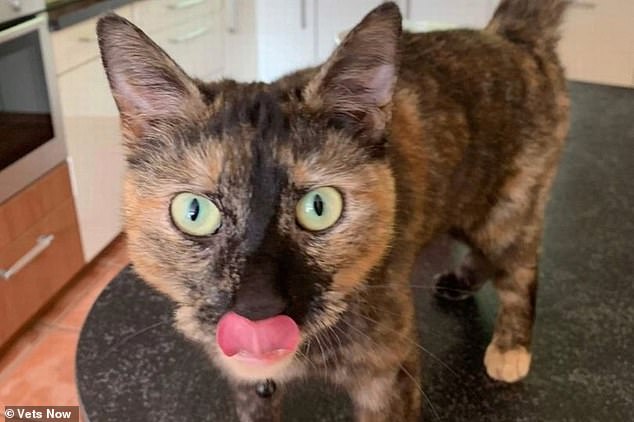 Cleo the Siberian-mix cat has its tongue ripped by a killer seagull in Lincolnshire. She underwent microsurgery where vets were able to remove the damaged area and reconstruct it

Have you been attacked or witnessed a seagull attack

Last month, a poor chihuahua named Gizmo was reportedly snatched from his owner’s garden by a gull.

The RSPCA said seagulls are most violent between May and July during breeding season.

A spokesman for the charity said: ‘Gulls that swoop suddenly on people or pets are usually trying to protect chicks that have left the nest.’ 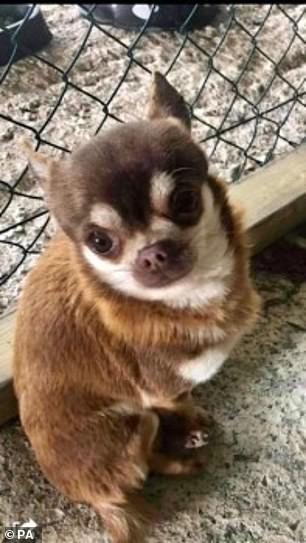 Chihuahua Gizmo was snatched in July from his owner Becca Hill, 24, by a seagull in Paignton, Devon

She urged people to leave gull chicks alone for their own safety.

And councils have been forced to spend hundreds of thousands of pounds on gull-proof bins and bags.

The birds peck through normal bin bags and cover streets in rubbish.

Councillor Alan Amos called for a gull cull on the ‘flying rats’.

He said: ‘They are attacking pets, including dogs and cats, and are preventing people from enjoying sitting out in their gardens.

‘If all this was being done by people, they would rightly be arrested.

‘It is simply not acceptable that people should be expected to live in these conditions anywhere in our city.’

Have you been attacked or witnessed a seagull attack? Send your pictures and story to [email protected] or 020 36125 2444

Schools could stay closed until ministers know the impact kids can have on spreading the virus, Chris Whitty says