About 420 Victorian Centrelink call centre staff have been sacked in a move savaged by the federal opposition as a "disgraceful" attack on workers administrating the nation's safety net amid a deep recession.

Workers at suburban call centres in Dandenong and Mill Park were informed on Tuesday by $2 billion British public service provider Serco that their employment would end on October 30. 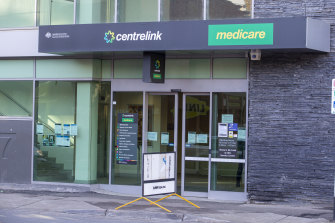 Workers at Centrelink call centres in Dandenong and Mill Park were informed on TuesdayCredit:Wayne Taylor

The sacked staff will not receive separation payments or redundancies because they are employed on a casual basis, despite many being on staff for more than two years.

A significant proportion of the laid-off cohort work regular full-time hours, but remain on casual contracts, according to the Australian Services Union, which represents some of the workforce.

A Serco spokesman said the decision to sack the workers was taken because government agency Services Australia amended its contract with Serco to reduce the types of work it carried out.

"The company told casual workers that, following recent contract discussions with Services Australia, the after-hours processing work will not form part of the new contract from October 30," the spokesman said.

"Any remaining processing work will be allocated to the telephony [call centre] network within the broader Services Australia network."

Labor's government services spokesman, Bill Shorten, said the Morrison government and Government Services Minister Stuart Robert needed to "explain why Services Australia is throwing more than 400 Victorians to the back of the unemployment queues".

"Slashing the jobs of hundreds of workers who are manning the Centrelink safety net at this time of national challenge is a disgrace," he said.

"The Morrison government preach a lot about Team Australia but are quite happy to give other Australians the boot."

Services Australia General Manager Hank Jongen said it was "important to note our service delivery partners are, and have always been, responsible for managing their own staffing levels in order to meet the contracted work and other requirements".

In meetings with ASU officials on Tuesday, Serco said it hoped to maintain contact with the workers and explore whether some of them could be redeployed.

The union said it would urge the company to redeploy the workers at call centres Serco operates for other government agencies including the Australian Taxation Office and the National Disability Insurance Scheme.

Sinead McKinlay, 34, was one of the workers stood down. She said she and her colleagues "felt sick" once they received notice of a meeting with managers.

"With our history with Serco, there is no trust. At a whim they shut us down, don't pay us, cut us off. People knew something was coming," she said.

"We've been given nine days' notice because we're casual. So it's legal, but I don't think it's fair or ethical.

"There's a lot of younger and older workers and workers with English as a second language. They will struggle in the job market and face financial hardship … I'm concerned for their mental health, for potential self-harm and family violence."

"It's a heartless decision that shows how insecure workers can be taken advantage of and employees bear no responsibility when things go south," he said.

About 450 staff at the Mill Park call park were stood down without pay in July due to a COVID-19 outbreak the ASU said was sparked by Serco ignoring social distancing requirements. The company advised employees, a large proportion of whom are casuals, to apply for the Victorian government's $1500 hardship payment.

The company was engaged in a dispute with the public sector union in August over its proposal to offer speed camera operators zero-hour contracts. The dispute has since been resolved and the zero-hour contract proposal was dropped.

Services Australia and the office of Mr Robert were contacted for comment.

Spain plans to loosen coronavirus lockdown restrictions by end of May

A 28-year-old Georgia ICE detainee awoke chained to a hospital bed and had to ask whether she could have children, LA Times reports