Russia and China have signed a new agreement to deepen their military ties in the face of what they say is increased threats from the US.

Sergei Shoigu, Russia’s defence minister, announced the new pact – which is due to run from 2021 until 2025 – following a call with Chinese counterpart Wei Fenghe.

Shoigu and Wei hailed recent joint drills by their nuclear bombers and warships in the South China Sea and Sea of Japan, while pledging more exercises in the future.

The pair said the displays of force were a necessary counter-balance to drills by US nuclear bombers, with Shoigu claiming 30 such missions took place last month.

It comes against a backdrop of growing military tensions around the world, with flashpoints in the west around Ukraine and Belarus, and in the east around Taiwan and the South China Sea. 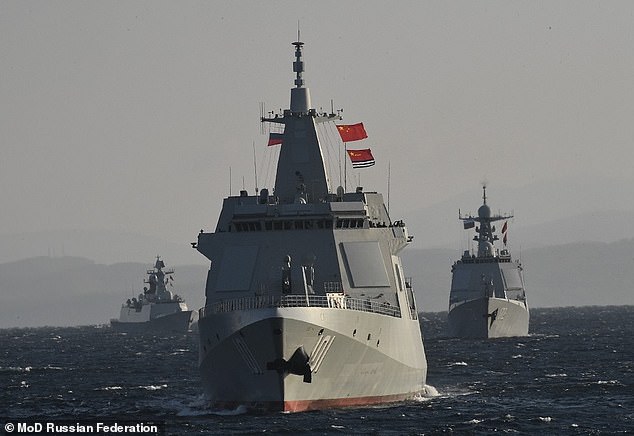 Russia and China have signed an agreement to deepen military ties over the next four years (pictured, Russian and Chinese ships on a joint patrol in the Pacific) 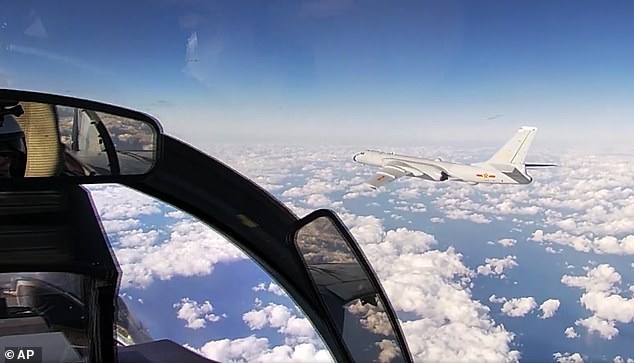 The pact comes after the two countries held a number of joint drills in recent weeks (pictured, a Chinese nuclear bomber over the Pacific, seen from the cockpit of a Russian bomber) 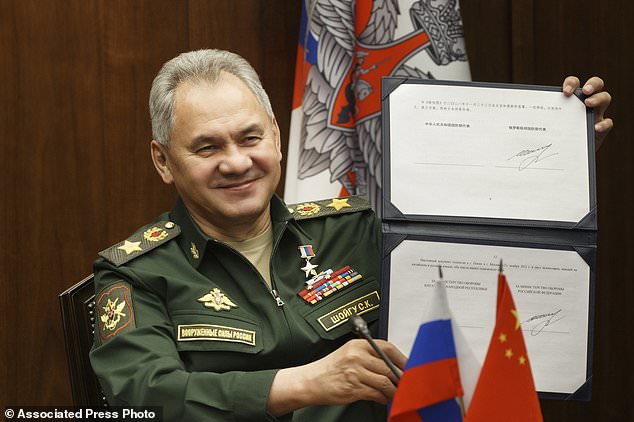 As Shoigu spoke, Russia announced it had carried out naval and air drills in the Black Sea – near Ukraine – where Moscow is currently massing troops amid warnings from Washington that an invasion could be imminent.

The drills involved around 10 aircraft and some ships, the Interfax news agency said.

Meanwhile Ukraine said it had carried out its own drills along the border with Russia, involving anti-tank and airborne units.

The Ukrainian state border service said the ‘special operation’ at the border with Belarus involved troops of the National Guard, police, Armed Forces and other reserves.

‘Aviation, drones will also be actively used for patrolling and monitoring,’ the service said in a statement.

Shoigu, announcing the new Chinese pact, pointed to the Global Thunder 22 drill in early November, saying 10 US nuclear bombers approached Russia near-simultaneously from east and west and came within 12 miles of the border.

‘In such an environment, the Russian-Chinese coordination becomes a stabilizing factor in global affairs,’ Shoigu said.

The US military said Global Thunder involved 11 B-52 stratofortress bombers that took off from air bases in Louisiana and North Dakota, and tested the ‘nuclear readiness’ of its forces.

The Pentagon did not say where the B-52 bombers flew, or how close they came to any other country’s airspace.

Shoigu also pointed to US bomber drills over the Sea of Okhotsk – in Russia’s far east – which he said were designed to practice shooting cruise missiles at Russia.

He appears to be referencing three B-1 bomber drills that took place last year, and appear designed to test America’s ability to strike ground targets using a range of new missiles including – potentially – its new hypersonic ARRW missile.

While the exact purpose of the missions was not disclosed by top brass, a press release at the time said they were designed to show off America’s ‘ability to hold any target at risk, anytime, and anywhere.’

Wei praised Russia for successfully countering what he described as U.S. pressure and military threats.

Shoigu and Wei hailed a series of maneuvers that involved Russian and Chinese warplanes and naval ships.

The bomber patrol followed joint naval maneuvers by Russian and Chinese warships and aircraft in the Sea of Japan last month.

In August, Shoigu visited China to attend joint war games, which marked the first time that Russian troops had taken part in drills on Chinese territory.

They were the latest in a series of war games in recent years, intended to underline increasingly close military relations between Moscow and Beijing.

Russian President Vladimir Putin and China´s leader, Xi Jinping, have developed strong personal ties to bolster a ‘strategic partnership’ between the former Communist rivals as they both faced tensions with the West.

Meanwhile American relations with both China and Russia has reached a low ebb in recent years, as Washington and Moscow face off over Ukraine and go toe to toe on a range of other issues including human rights and democracy.

Meanwhile Beijing and Washington have an increasingly uneasy relationship due to economic competition, diplomatic rows over the origins of Covid, and military tensions around Taiwan and the South China Sea.

While the two sides are trying to maintain an air of cordiality on the surface – with Biden and Xi recently holding a joint virtual summit – there are fears the two super-powers could come into open conflict.

The recent discovery of targets designed to look like US aircraft carriers on military firing ranges in China’s remote western deserts has done little to assuage fears.

Tests of new weapons have also stoked tensions – such as China’s launch of what appeared to be a hypersonic nuclear missile over the summer.

While little is known about the ‘weapon’, this week it was revealed that one of the tests appeared to show the projectile had released a secondary payload while streaking around the Earth at five times the speed of sound. 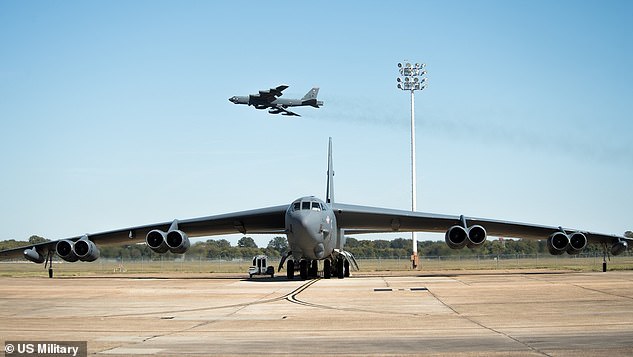 Russia pointed to recent US bomber exercises, which it said had rehearsed a nuclear attack on Russia from both the west and east 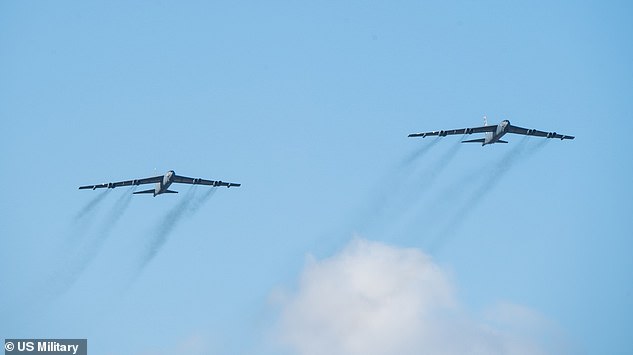 Analysts don’t know what the payload was – whether a counter-measure or offensive weapon – but say the technology goes beyond anything the US possesses.

China has acknowledged one of the tests, but claimed the ‘weapon’ is actually a civilian spacecraft designed for the peaceful use of space.

Meanwhile Russia recently conducted its first successful test of a satellite-killer missile, blowing up one of its own defunct spy satellites and littering low-Earth orbit with thousands of pieces of debris.

The test forced astronauts aboard the ISS – including two Russians – to flee to their escape pods amid fears the station could be hit, and prompted the Pentagon to denounce the test as ‘reckless’.

Russia has confirmed it tested the weapon, but denied the ISS was ever at risk while blasting America as a ‘hypocrite’.

As the global balance of power undergoes one of its most-dramatic shifts since the end of the Cold War, countries are seeking out new alliances to counter perceived threats and draw battle lines in the event of conflict.

America has forged two new alliances, perhaps the most-significant of which is the AUKUS pact with the UK and Australia to give the latter its first nuclear submarines.

While the allies have denied the pact is aimed at any specific country, observers have few doubts that it is aimed at countering China’s growing presence in the South China Sea. Beijing has reacted furiously to the news.

Washington has also put together the Quad alliance with India, Japan and Australia which is also aimed at countering an increasingly assertive Beijing.

While the objectives of the alliance are less-well defined than AUKUS, the parties have already held joint naval drills in the Indian Ocean.

Meanwhile the US has also been rallying its allies in Europe amid Russia’s build-up of troops near the border with Ukraine, leaning on both NATO and the EU to make statements denouncing the move.

EU nations have also been rallying around member-state and NATO ally Poland over the recent migrant crisis on the border with Belarus, denouncing what they called a Moscow-backed plan to destabilise the bloc using vulnerable people as a weapon.

‘In such an environment, the Russian-Chinese coordination becomes a stabilizing factor in global affairs,’ Shoigu said.

Tim Davie says 'everyone in my generation is walking a tightrope'