Stockholm: Police in Stockholm are investigating a woman in her 70s suspected of having kept her son locked up – reportedly for 28 years – in an apartment south of the Swedish capital, investigators say.

Prosecutor Emma Olsson, who heads the preliminary investigation, said the woman was held on suspicion of unlawful deprivation of liberty and grievous bodily harm. 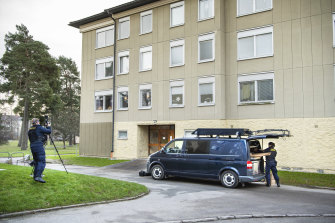 Police at the apartment block in Haninge, south of Stockholm, where a woman is suspected of locking up her son. Credit:AP

Olsson said the 41-year-old son was found by a relative who then alerted authorities.

The woman has denied wrongdoing, Olsson said, adding that the son was admitted to a hospital to be treated for "the physical injuries he had when he was found".

"We cannot go into what type of injuries" he has, Olsson said.

Swedish newspaper Expressen said the man was found on Sunday by a relative who had learned that the elderly woman had been admitted to a hospital. The relative went to the flat, found the main door unlocked and entered it.

The relative, who was not identified, told the newspaper that there was "urine, dirt and dust" all over the place and "it smelled rotten". 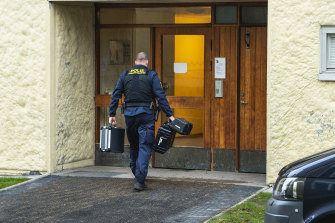 Police enter the apartment block where the man was found.Credit:AP

She heard a noise from the kitchen and found the man sitting on blankets and pillows. According to the relative's account in the paper, he had no teeth, had sores on his legs and his speech was slurred.

"He spoke very fast and a little incoherently, but he was not afraid of me," the relative was quoted as saying by Expressen.

The newspaper said the man's apparent captivity had started 28 years ago, which would have made him 13 at the time.

Olsson said investigators would be interviewing the mother, the son and witnesses.

Daughter who lost mum to coronavirus and didn't get to say goodbye says 'if you value life, stay in'