Spectators at Moulin Rouge! The Musical were told to leave Melbourne’s Regent Theatre mid-show on Friday afternoon after a staff member within the company tested positive for COVID-19.

Organisers called off the performance partway through the second act, telling the audience the show would not proceed and Ticketmaster would be contacting them shortly. 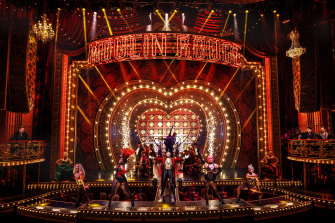 Organisers called off the show mid-performance following confirmation of a positive case among staff.Credit:Michelle Grace Hunder

They did not specify who had received the positive result.

In a statement, a spokeswoman said the decision was due to an abundance of caution.

“We made the decision to discontinue this afternoon’s performance of Moulin Rouge! The Musical after a positive COVID-19 test result within the wider company was made known to us,” she said. 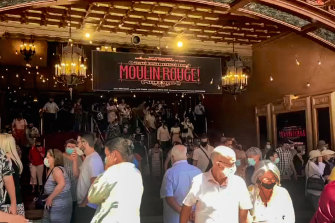 Audience memebers leave the Regent Theatre after the abrupt end to the show.Credit:Nine News

“We will have an update regarding future performances as soon as possible.”

The company was scheduled to perform once or twice per day until April. It is unclear how many performances will be affected.