A man who shot two brothers, killing one and injuring the other, claims he fired in self-defence and feared the pair because he knew them to be Albanian mafia who ruled Melbourne's western suburbs, a trial has heard.

Security camera footage played to a Supreme Court jury shows Ahmad El-Chakik, seated in his four-wheel drive, grapple with Edmund and Elvis Shabani, who were standing at the driver's door until they stumbled backwards and fell when shot on October 20, 2017. 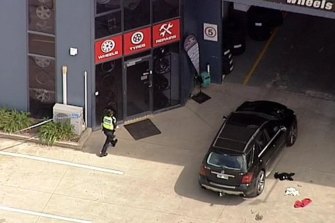 Police at the scene of the shooting in 2017Credit:Seven News

Edmund Shabani died from wounds to the chest and abdomen while Elvis was shot in the legs but survived. Six shots were fired outside Westwood Wheels & Tyres in Ravenhall.

Mr El-Chakik has pleaded not guilty to murder, attempted murder and intentionally causing serious injury and told police he shot the brothers in self-defence.

Defence counsel Glenn Casement told the court on Wednesday that Mr El-Chakik knew the Shabani brothers had a history of violence, used weapons and were the Albanian mafia who "run the western suburbs".

But prosecutor Mark Rochford, QC, outlining his case to the jury, said Mr El-Chakik was reversing his Toyota LandCruiser out of the car park about 1.20pm when he stopped and then drove forward and called the brothers over.

Mr El-Chakik was holding a gun as he and the brothers had an animated discussion, Mr Rochford said, until the accused man struck Edmund Shabani to the face.

The Shabanis then grappled with Mr El-Chakik until both stumbled backwards and fell when shot, and the accused man drove away.

Mr El-Chakik later drove to a police station and told investigators, "I was fighting for my life. I acted in self-defence to get those people away from me."

He told police he "felt terrible" but was "totally innocent of the allegations".

Mr El-Chakik also told police he knew the brothers to be violent and that they pulled a gun on him first.

"That's clearly false as can be shown by watching the CCTV," Mr Rochford told the jury.

In response, Mr Casement said Mr El-Chakik saw the brothers in a chance meeting but was "disproportionately set upon" by men who were trying to get into his vehicle, after he slapped Edmund Shabani.

This is the first jury trial to start since Victoria ended its coronavirus lockdown.

To socially distance, the lawyers were seated in the jury box, jurors were seated throughout the public gallery of the court room and Mr El-Chakik was in seating usually occupied by media. Everyone in court wore a mask unless they were speaking, except Justice Lex Lasry. Judges are exempt from wearing masks to ensure they can be heard throughout the court.

The trial will continue on Thursday.

Driver runs over man at George Floyd demonstration in Denver

Activist who posted about Wuhan outbreak being force-fed, says lawyer