Naypyitaw, Myanmar: Myanmar’s military has denied that controversial statements by its chief were meant as a threat to stage a coup, claiming the media had misinterpreted his words.

Political tension in the south-east Asian nation soared this past week after a spokesman for the military said a coup could not be ruled out if military complaints of widespread voting fraud in last November’s election were ignored.

The commander-in-chief, Senior General Min Aung Hlaing, had told senior officers in a speech Wednesday that the constitution could be revoked if the laws were not being properly enforced. Adding to the concern was the unusual deployment of armoured vehicles in the streets of several large cities. 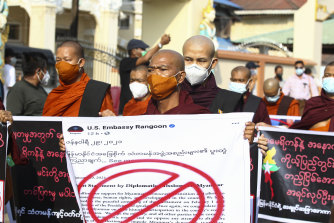 Buddhist monks participate in a protest against the election results with supporters of the Myanmar military and the military-backed Union Solidarity and Development Party near Shwedagon pagoda on Saturday.Credit:AP

Saturday’s statement from the military, known as the Tatmadaw, said that “some organisations and media” wrote without foundation when they said the military threatened to revoke the constitution. The statement said Min Aung Hlaing’s speech was taken out of context, and was actually an observation to senior officer trainees on the nature of the constitution.

The ruling National League for Democracy party captured 396 out of 476 seats in the November 8 election, allowing it to form a government led by State Counsellor Aung San Suu Kyi for another five years. The military-backed Union Solidarity and Development Party won only 33 seats.

The military has publicly complained several times since the polls that there was electoral fraud and called on the government and the Union Election Commission to review the results. It has said it has found 8.6 million irregularities in voter lists in 314 townships that could have let voters cast multiple ballots or commit other “voting malpractice”.

The election commission said there was no evidence to support these claims.

Parliament’s new session is set to open Monday in the capital Naypyitaw.

The military ran Myanmar for some 50 years before beginning a transitioning to democracy in 2010. The current constitution ensures the country’s generals maintain considerable influence in the country’s affairs by guaranteeing them a quarter of the seats in parliament and control of a number of key ministries.

Alarmed diplomatic missions in the country had reacted on Friday to the military’s statements by issuing a joint statement urging calm.

“We urge the military, and all other parties in the country, to adhere to democratic norms, and we oppose any attempt to alter the outcome of the elections or impede Myanmar’s democratic transition,” said the statement issued by Australia, the EU, the US, Britain and others.

Peaceful protests have been held in the past few days by supporters of the military and the Union Solidarity and Development Party. In Yangon, the country’s biggest city, about 1000 demonstrators gathered on Saturday next to the famous Shwedagon pagoda.

The military has not been alone in criticising the election.

Independent rights groups before and after the polls criticised the disenfranchisement of Rohingya Muslims and the cancellation of the vote in certain areas.

The election commission cited the dangers of ongoing combat between government forces and ethnic minority guerrillas, but critics suggested certain areas were singled out for cancellation because they were certain to elect lawmakers from parties hostile to Suu Kyi’s government.