A University of New Hampshire student who was reported missing Saturday after a night out drinking with friends was found dead, authorities said.

The death is not considered suspicious, according to a statement from the school.

The student, Vincenzo Lirosi, 22, was hanging out with friends and is believed to have taken "a path through a wooded area" to get back home, the Durham Police Department wrote in a separate Facebook statement.

Lirosi was last seen around 1 a.m. and was reported missing at 3 a.m. He did not have his phone or identification with him when he vanished, according to police. 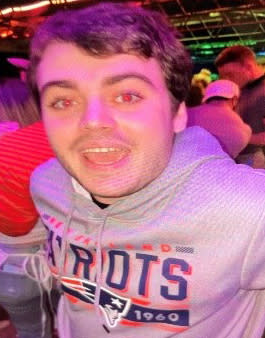 A search for Lirosi began and continued into Sunday. Just before 1:30 p.m., he was found dead by a New England Search and Rescue K-9 team in a marshy area off of Coe Drive in Durham, police said in the statement.

"Though this is not the outcome we had all hoped for, we are grateful that we were able to find Vincenzo and bring some closure to his family," Police Chief Rene Kelley said.

The university expressed its condolences to Lirosi's family.

"Our thoughts and prayers are with Vincenzo’s family & friends. This is a very sad day for our community and right now we are focused on providing the support and resources needed for everyone who knew him or is impacted by his death," the school's statement read.

The university's police department wrote: "We are deeply saddened by the loss of Vincenzo and know that this loss will impact his fellow Wildcats. Whether you knew him or not, he was one of us; please take care of yourselves and one another."

Baby, one, suffers serious facial injuries after being bitten by a dog as cops arrest man, 27, in Kettering