5.8 earthquake strikes in the heart of New Zealand causing tremors on the north and south island

New Zealand has been rattled by its biggest earthquake this year, a 5.8 magnitude tremor striking near the heart of the country.

The strong earthquake was centred just off the Marlborough Sounds between North and South Islands, startling Kiwis at 9.07pm on Thursday.

There have been no immediate reports of serious damage.

More than 44,000 Kiwis reported the tremor to monitoring agency GeoNet, while others reported their experiences on social media. 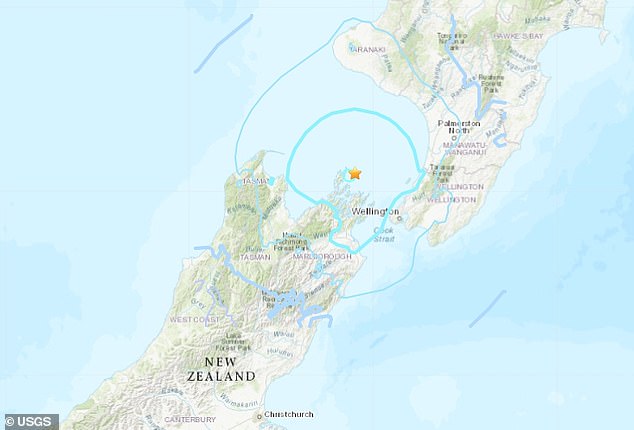 ‘I’m on the 3rd floor in Wgtn (Wellington) city at a reunion. We are freaking,’ Twitter user Sally-ann wrote.

‘I was almost diving under the wee coffee table for that one,’ another said.

‘Jesus! Knocked a painting off the wall,’ Pearl wrote.

Jeff Tollan described his experience at a Wellington rooftop bar.

‘At drag bingo at Dirty Little Secret when an earthquake hits. The host asks ‘do you want us to stop’,’ he Tweeted.

‘Everyone says ‘no’, and life continues…’

The depth was measured at 51km below sea level.

‘Caused by a M5.8 earthquake in the Marlborough region. It was moderately deep and felt over a wide area – typical of earthquakes of this size and depth.’

Based on GeoNet reports, Kiwis felt the quake most strongly in the capital, up the North Island’s Kapiti coast, and along the top of the South Island.