‘I’m happy to say anything anybody wants as long as they pay me £100’: Nigel Farage is defiant after saying another pro-Irish Republican slogan in video birthday message to ‘Gerard’

Last week, the pro-Brexit politician used the phrase ‘Up the Ra’ during a birthday greeting on Cameo.

Earlier today, Mr Farage, 57, posted a video wishing ‘Gerard’ from Brighton a happy birthday from his friends ‘Con’ and ‘Maggie’.

The latest video, featuring the phrase ‘our day will come’ in Irish, has been shared widely just hours ahead of a celebration in Armagh tomorrow to mark 100 years since the partition of Ireland. The phrase ‘tiocfaidh ár lá’ refers to the unification of the island of Ireland and is commonly used by Irish republicans.

Mr Farage said he was not bothered by any controversy and challenged people to keep sending him money for his messages. 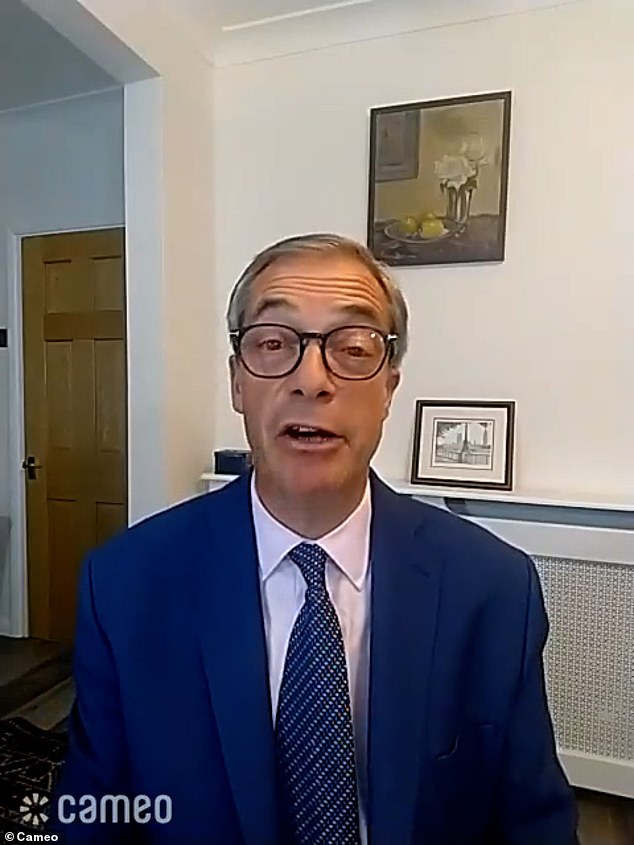 Ex-Ukip leader Nigel Farage, pictured, said he was happy to keep taking money from people after he was duped for the second time in ten days into saying a pro-Irish republican phrase

The former MEP is available to provide personal messages to people on Cameo for a cash payment.

According to Mr Farage’s profile on the service, he said: ‘They call me Mr Brexit… some people say I am controversial, and I couldn’t care less.’

‘Con and Maggie have been onto me because they want to wish you a very happy 71st birthday, and they are looking forward to seeing you and some of the old team at Tiocfaidh ár lá’s in Brighton.

‘I’ve had the full story, you were the team leader there for many years, and they now want to wish you a belated – because we kind of missed it by a couple of days – but a belated 71st birthday.

‘And they hope you’re having a very happy retirement, as do I Gerard, enjoy.’

After the video was posted online, some people drew links to former Sinn Fein leader Gerry Adams who celebrated his birthday earlier this month.

They also referenced Brighton as the scene of the 1984 IRA terror attack on the Conservative Party Conference.

Others suggested the two well wishers, Con and Maggie, were references to the Conservative Party and to Maggie Thatcher. 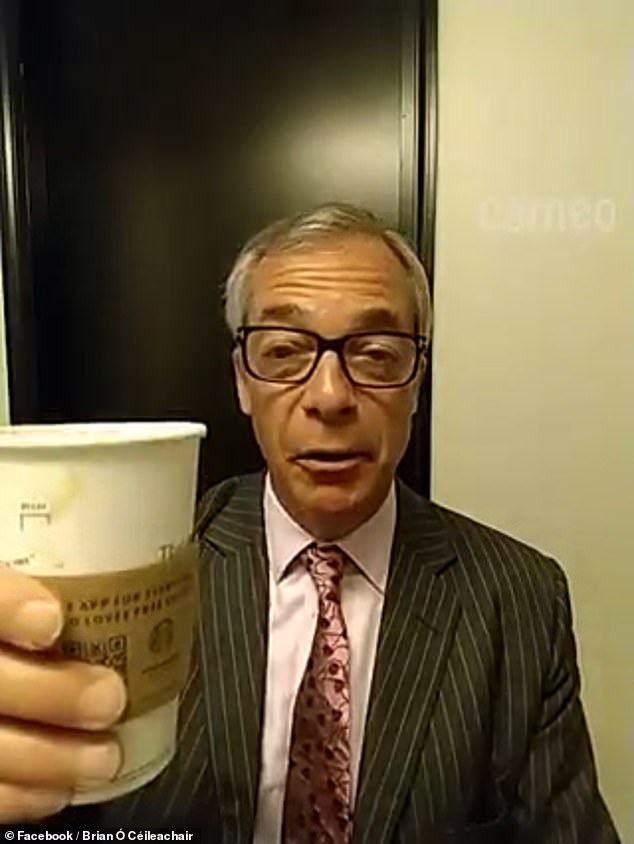 Last week, Mr Farage left a message for Brian Ó Céileachair after his friend Aidan Hart paid £73 for Mr Farage to read out a congratulatory birthday greeting featuring the phrase ‘up the RA’

Mr Farage told MailOnline: ‘I’m happy to wish Gerry Adams happy birthday, there are many Gerry Adams’ out there.  I have a friend who was christened Michael Hunt, some people call him Mike. These things happen.

‘As far as I’m concerned [Tiocfaidh ár lá – pronounced Chucky arr larr] it was the name of an establishment in Brighton. I haven’t been in every bar in Brighton to check .

‘I have never spoken a word of Irish in my life and nor shall I ever.’

‘I once drove past Colonel Gaddafi in London, that doesn’t make me his right hand man.’

Mr Farage said he had no regrets and challenged people to keep sending him cash for messages.

‘This message is for Brian Ó Céileachair, brexiteer,’ Mr Farage says in the short clip.

‘I hope you have a great birthday and this comes from your good friend Aidan,’ he continues before raising a cup of coffee to give a toast.

‘Now, it’s a bit early in the day so all I’ve got actually is coffee, but I hope you enjoy a few pints with the lads tonight.’

He then says ‘up the RA!’ before taking a sip.

The phrase is known to be one of ‘support or encouragement of the Provisional Irish Republican Army’.

Commenting last week on the earlier controversy, Mr Farage told MailOnline: ‘If I saw “up the RA” I would have looked at that as something very innocent, and wouldn’t have even known there was an implication to it.

Mr Farage added that he does a ‘very large number’ of videos and is one of Cameo’s most popular users.

Asked if he would accept a message request that was supportive of the IRA, Mr Farage replied: ‘Are you joking? I had a face-to-face death threat from them.’

How are mRNA vaccines made and how do they work?