Philadelphia: A federal appeals court has roundly rejected US President Donald Trump’s last remaining legal challenge to Pennsylvania's election results, calling it "light on facts" and "breathtaking" in the presumptuousness of its request to disenfranchise millions of voters in the state.

And yet, once again, Trump's lawyers tried to spin a victory out of another loss in court, saying the ruling sets the case up for the venue at which they've always wanted it to be heard: the US Supreme Court. 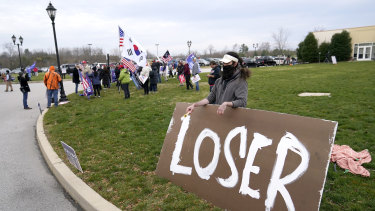 Supporters of President Donald Trump, left, gather as a counter protester holds a sign outside of the Wyndham Hotel where the Pennsylvania State Senate Majority Policy Committee met during the week.Credit:AP

Circuit Judge Stephanos Bibas, a Trump appointee who authored the decision for the three-judge panel of the US Court of Appeals for the Third Circuit, was less enthusiastic about the merits of their case, starkly noting at one point in his 21-page opinion: "The campaign cannot win this lawsuit."

Bibas pointed out that despite the Trump campaign's speculative claims and fiery rhetoric, it never alleged — let alone offered any evidence to suggest — that any vote had been improperly counted or cast.

"Calling an election unfair does not make it so," he wrote. "Charges require specific allegations and then proof. We have neither here."

Joining him on the appeal were Chief Circuit Judge Brooks Smith and Judge Michael Chagares, both named to the bench by President George W Bush. Despite having the case heard before a panel of Republican presidential appointees, Trump lawyers Rudy Giuliani and Jenna Ellis dismissed the trio as part of "the activist judicial machinery in Pennsylvania".

"On to SCOTUS!" Ellis tweeted on Friday afternoon, US time. 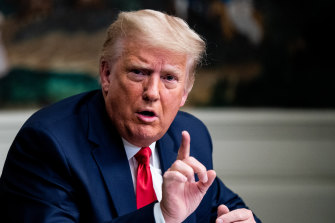 Donald Trump’s legal team has suffered another setback in its bid to overturn the election results.Credit:Bloomberg

Trump helped cement a 6-3 conservative majority on the Supreme Court bench with last month's rushed appointment of Amy Coney Barrett, but it is not certain that the justices will even consider the case. And if they opt to do so, there is limited time to do anything before the December 8 federal deadline for states to appoint their Electoral College delegates. The college votes on December 14.

Even if the court were to interfere with Pennsylvania's election results — an outcome legal experts describe as dubious — Trump still would not have enough Electoral College votes to overturn President-elect Joe Biden's victory.

Still, elections administrators and their lawyers said they were more than prepared to take on the President's team, if necessary, before the nation's top court. 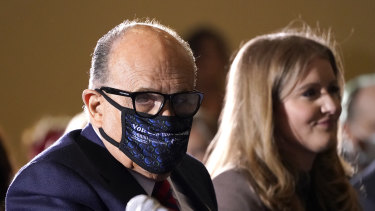 The Third Circuit ruling affirmed a lower court decision from a federal judge in Williamsport who described the campaign's effort to block the state from certifying its election results as a "Frankenstein's monster" of legal claims lacking any evidence to support them. Since then, elections administrators finalised that certification, cementing Biden as the state's victor by roughly 81,000 votes.

Although Trump and his lawyers have made numerous public but unfounded allegations of widespread voter fraud, their federal case — the linchpin of a legal strategy that has seen them lose more than a dozen other court challenges in the past month — focused entirely on the state's process for the casting and counting of mail ballots.

Specifically, Trump lawyers complained about the level of access Republican scrutineers had to the tallying of votes and that some Democratic leaning counties, under guidance from state officials, had allowed voters to correct mistakes on their ballots including missing signatures or secrecy envelopes. They argued that those practices unfairly diluted Republican votes in Pennsylvania while favouring those for Biden.

But state courts have previously rejected those claims. And as Bibas noted in the ruling, the Trump campaign has yet to show that it was treated differently in any way from its opponent. The appellate court even rejected Giuliani's request to hear oral arguments on the matter.

The President's lawyers had also asked the court to throw out roughly 1.5 million mail ballots of voters in counties — including Philadelphia and its suburbs — or, alternatively, to declare the entire election "defective" and appoint the GOP-controlled state legislature to select the state's 20 delegates to the Electoral College vote.

Bibas scoffed at the idea, calling it "drastic and unprecedented".

Despite the resounding loss in court, Trump and his allies continued to press their cause in other venues.

Mike Kelly, a Butler County Republican and one of the President's top boosters in Congress, urged the Pennsylvania Supreme Court in new filings on Friday to declare unconstitutional the law that allowed widespread mail voting in the state. Without alleging any fraud, his long-shot case asks the court to throw out every mail ballot cast or to disregard the election entirely and appoint the General Assembly to choose the state's electors.

It is not clear that — with the results already certified, the electors already chosen and their appointments logged by the National Archive — the state's Supreme Court could do anything to disrupt Biden's victory on the off-chance it was inclined to do so. Meanwhile, a group of 21 GOP state legislators signalled their intention to file a House resolution urging Governor Tom Wolf, a Democrat, to withdraw the elector selections and declare Pennsylvania's election results "in dispute".

"It is absolutely imperative that we take these steps if we are to ensure public trust in our electoral system. Faith in government begins with faith in the elections which select that government," the group, led by Republican representatives Russ Diamond and Eric Nelson, said in a statement.

Notably, House Speaker Bryan Cutler, a Republican, and Majority Leader Kerry Benninghoff, also a Republican, were not among the lawmakers to sign on.

That came even as GOP state Senator Doug Mastriano — who just days earlier had hosted Giuliani and, via speakerphone, the President at a raucous GOP-sponsored event in Gettysburg — vowed on a podcast that he would seek to file legislation aimed at "grabbing back" the legislature's role in appointing Pennsylvania's presidential electors for future election years.

Understand the election result and its aftermath with expert analysis from US correspondent Matthew Knott. Sign up to The Sydney Morning Herald‘s newsletter here, The Age‘s here, Brisbane Times‘ here and WAtoday‘s here.

Thousands of women and children had their lives 'ruined' in three avoidable health scandals, report finds