Paris: French President Emmanuel Macron enjoyed no respite on Monday as, hours after he won re-election by defeating the far right’s Marine Le Pen, political opponents called on voters to deny him a parliamentary majority.

If he fails to score another victory in the June 12 and 19 parliamentary elections, the pro-European, centrist president will struggle to advance with his pro-business agenda, including unpopular plans to push back the retirement age. 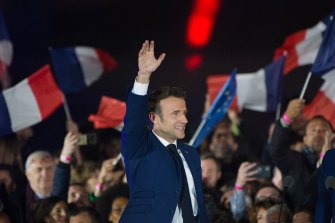 “Voting isn’t over, the legislative elections are the third round,” said Jordan Bardella, a close Le Pen ally, telling voters: “Don’t put all the power in Emmanuel Macron’s hands.”

The hard left’s Jean-Luc Melenchon, who came third – just behind Le Pen – in the April 10 first round of the election, said Macron had been elected “by default”.

“Don’t give up,” he told supporters. “You can beat Macron (in the parliamentary election) and choose a different path.”

Le Pen’s niece, Marion Marechal, who defected to writer-turned-nationalist presidential challenger Eric Zemmour before the election, urged her aunt and party leaders to organise a meeting to discuss a possible parliamentary pact.

“Without a coalition, Macron will have all the powers and Melenchon will be the first opposition group,” Marechal wrote on Twitter. “With a coalition, we can turn the national camp into the biggest force in the Assembly!“.

In recent French legislative ballots, the president’s party has always won a majority in parliament.

Should the outcome be different this time, Macron would have little choice but to name a prime minister from another party, ushering in what has traditionally been a tense period of “cohabitation” during which presidential powers are severely curbed.

A government source said the president was at a retreat in Versailles consulting political figures such as ex-presidents Francois Hollande and Nicolas Sarkozy. 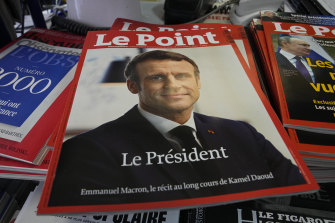 US President Joe Biden congratulated Macron on his re-election and conveyed “his readiness to continue working closely with President Macron on our shared global priorities,” the White House said on Tuesday (AEST).

According to a readout after the call, Macron and Biden agreed to intensify their dialogue on “major global issues … and in particular on global issues related to the war in Ukraine such as food security”.

During a cohabitation, the president remains the head of the armed forces and retains some foreign policy influence but the government has responsibility for most other day-to-day matters of state and policy.

“The reality is there is more to the French election story than Macron’s win yesterday,” said Rabobank FX strategist Jane Foley.

Final results of Sunday’s runoff showed Macron took 58.54 per cent of the vote. While a clear win, the result also gave the far right its biggest share of the presidential ballot on record.

Macron and his allies pledged to govern differently and listen more to voters, hoping it will help them win a crucial majority in parliament.

France’s unemployment rate dropped to its lowest in 13 years during Macron’s first term, and its economy – the world’s seventh largest – outperformed other big European countries as well as the broader euro currency zone.

But his sometimes abrasive style and pro-business reforms, including a law that makes it easier to fire people, have stirred much discontent, especially amid leftwing voters. Macron acknowledged in a low-key victory speech that many had voted for him mainly to thwart his far-right challenger.

“Many in this country voted for me not because they support my ideas but to keep out those of the far right. I want to thank them and know I owe them a debt in the years to come,” Macron said in his late-night speech.

“We will have to be benevolent and respectful because our country is riddled with so many doubts, so many divisions.”

Macron’s message was that things would be different from his first term.

“Our first job will be to unify,” parliament leader Richard Ferrand, a close ally of Macron, told France Inter, saying lawmakers would involve voters more in their decision-making.

A poll on Monday suggested Macron would secure a ruling majority in June’s parliamentary elections.

Macron’s camp, in a poll by Harris Interactive institute, is seen winning 326 to 366 seats out of 577, if he manages to strike a broad centre-right alliance with smaller parties including the conservative Les Republicains.

But even without Les Republicains – whose presidential candidate Valerie Pecresse received the lowest percentage of the first-round vote in the party’s history – Macron would still reach a comfortable absolute majority, the poll for business magazine Challenges showed.

The far-right camp is seen winning 117 to 147 seats, the poll said, while left-leaning parties together would reach between 73 and 93 seats.

Mystery as £300,000 'spy boat' found near UK nuclear submarine base – and no country is claiming it

Duchess of Cornwall chats to family on video app

Riotous extracts from the memoirs of the late DENIS NORDEN