That “mazel cough” will cost a lot!

City Hall will levy a $15,000 fine against the Brooklyn synagogue that broke social distancing regulations by hosting thousands at a clandestine wedding for the grandson of a top religious official in the Hasidic community, Mayor Bill de Blasio said late Monday.

Hizzoner announced the fine and summons the day after The Post exposed how thousands packed into the Yetev Lev temple in South Williamsburg on Nov. 8 — dancing and singing at the top of their lungs with nary a mask in sight as they celebrate the nuptials of Yoel Teitelbaum, the grandson of Satmar Grand Rabbi Aaron Teitelbaum.

“That’s just not acceptable, I mean, we’ve been through so much,” de Blasio told New York 1’s Errol Louis during his regular Monday appearance on ‘Inside City Hall.’ “This was amazingly irresponsible, just unacceptable.”

De Blasio said that while it remains unclear just how many people packed 7,000-person capacity Satmar schul in South Williamsburg, it was obvious that the social distancing and mask-wearing measures ordered by city and state officials were blatantly broken. 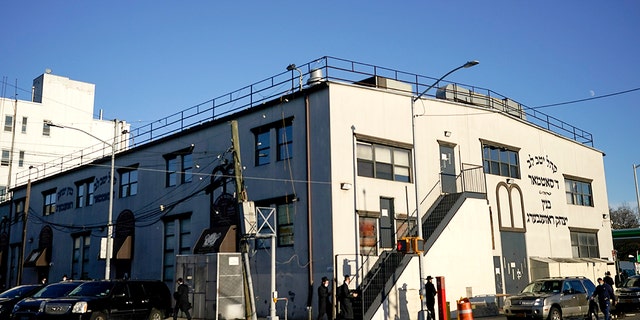 Men walk past the Yetev Lev temple Monday, Nov. 23, 2020, in the Brooklyn borough of New York. A Brooklyn synagogue should be investigated over reports that it hosted a secret wedding with thousands of unmasked guests earlier this month, New York Gov. Andrew Cuomo said Sunday. (AP Photo/Frank Franklin II)

The Post obtained videos of the crowds and revealed that extensive measures that organizers took to prevent word of the wedding from leaking out to City Hall after officials kiboshed a similar celebration for the grandson of a competing Satmar sect, fearing the mass indoor gathering could fuel a new coronavirus outbreak.

“There appeared to be a real effort to conceal it which is absolutely unacceptable,” de Blasio told Louis. “There will be a summons for $15,000 immediately for that site and there could be additional consequences quite soon as well.”

Despite the COVID-19’s awful toll in ultra-Orthodox communities, officials have struggled to convince residents and local businesses to abide by mask rules and social distancing regulations.

In turn, several of those neighborhoods were at the center of the city’s first major coronavirus outbreak this fall, leading Gov. Andrew Cuomo to impose ‘red zone’ shutdown rules over some of the area to try to contain the spread. That triggered raucous protests that turned violent, including attacks on reporters.