The New York Times has hailed the RMT’s strike-mad Mick Lynch as ‘an unlikely national hero’ in Britain.

In an opinion piece published by the US newspaper, journalist Rachel Shabi praised the 1970s-style firebrand, who has spent months trying to bring the country to a grinding halt and is now determined to wreck the Christmas holidays for millions of people with fresh walkouts.

Painting a bleak picture of the UK, with the NHS on ‘life support’, public transport ‘spluttering’ and food banks ‘at breaking point’, the article – titled ‘Britain Is Miserable, but Britons Are Fighting Back’ – said: ‘Britons are fighting back. Months after what was called a hot strike summer, in which almost 200,000 workers staged walkouts, Britain is witnessing industrial action on a scale not seen in decades — and in all sorts of unlikely places.’

It went on: ‘The strikes, usually contentious, have unexpectedly captured the public mood. People go to picket lines and speak up for workers on television and radio phone-ins.

‘Mick Lynch, the leader of the transport union that has been at the forefront of strikes, has become an unlikely national hero. His refusal to accept things as they are, as well as his evisceration of hostile interviewers, has struck a chord.’ 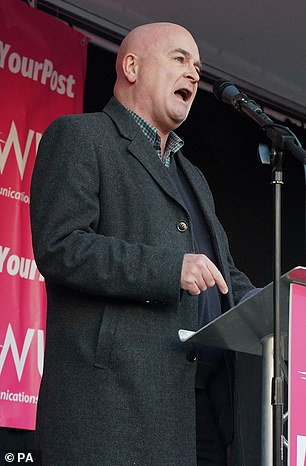 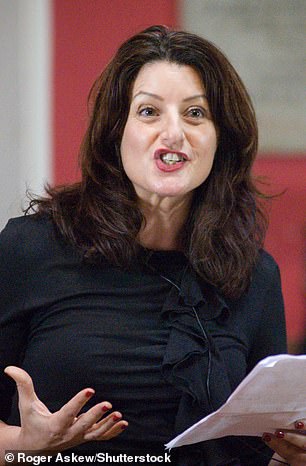 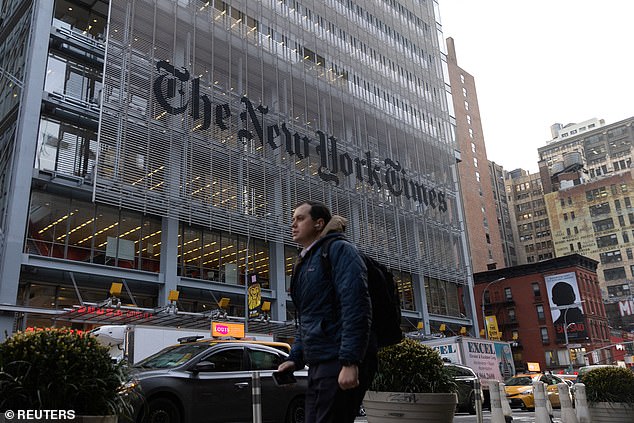 In an opinion piece published by the US newspaper, Ms Shabi praised the 1970s-style firebrand, who has spent months trying to bring the country to a grinding halt and is now determined to wreck the Christmas holidays for millions of people with fresh walkouts

The article headline read: Britain is miserable, but Britons are fighting back

Rachel Shabi is a British NYT contributor who specialises in progressive politics, migration and counter-extremism.

She studied at the University of Edinburgh and published her first book, Not the Enemy: Israel’s Jews from Arab Lands, in 2009, for which she received a National Jewish Book Award.

In 2011, she was shortlisted for the Orwell journalism prize and was also a jount winner in the press Category of the Anna Lindh Journalist Award for her work in The Guardian earlier that year.

And in September, just days after the Queen’s death, the paper sparked a backlash for the tone of its reporting about funeral costs, calling it a ‘hefty price tag’ that British taxpayers would have to burden.

Meanwhile at the New York Times this week, more than 1,000 unionized journalists and other employees began a 24-hour walkout on Thursday, the first strike of its kind at the newspaper in more than 40 years.

The union, part of the NewsGuild of New York, had set a deadline for a new contract for midnight December 8, and accused management of ‘failure to bargain in good faith’.

As union members picketed in front of the newspaper’s Manhattan headquarters, union organizers urged readers to join in a one-day boycott of all Times products, including its website and the popular game Wordle.

The New York Times issued a statement accusing the union of abandoning the negotiations, saying: ‘While we were still in negotiations and ready to continue, we received notification from more than 100 NewsGuild members in the newsroom confirming that the strike would proceed.

‘It is disappointing that they are taking such an extreme action when we are not at an impasse,’ the company said in a statement to DailyMail.com.

Times management had offered an immediate raise of 5.5 percent upon ratification of the contract, plus 3 percent raises in 2023 and 2024, along with a minimum salary floor of $60,000.

Stacy Cowley, a finance reporter and union representative, said the union is seeking 10 percent pay raises at ratification, which she said would make up for raises not received over the past two years during a period of soaring inflation.

It comes as Mr Lynch launched a fresh attack on the Government for ‘torpedoing’ a deal aimed at resolving the long-running dispute over jobs, pay and conditions.

The article was written by British guest contributor Rachel Shabi, who shared it to Twitter before noting journalists at the publication had urged readers not to engage with NYTimes platforms that day as they went on strike for better pay and conditions 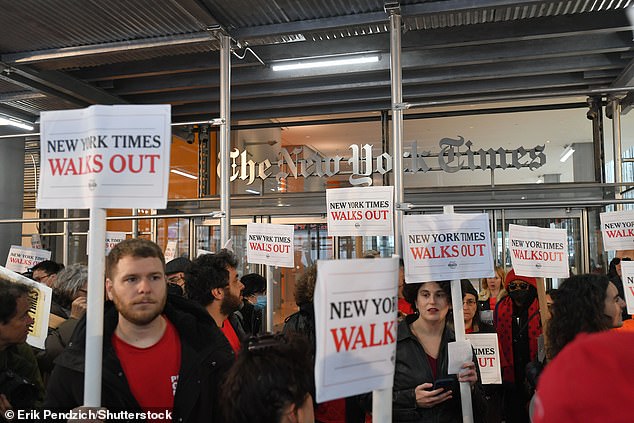 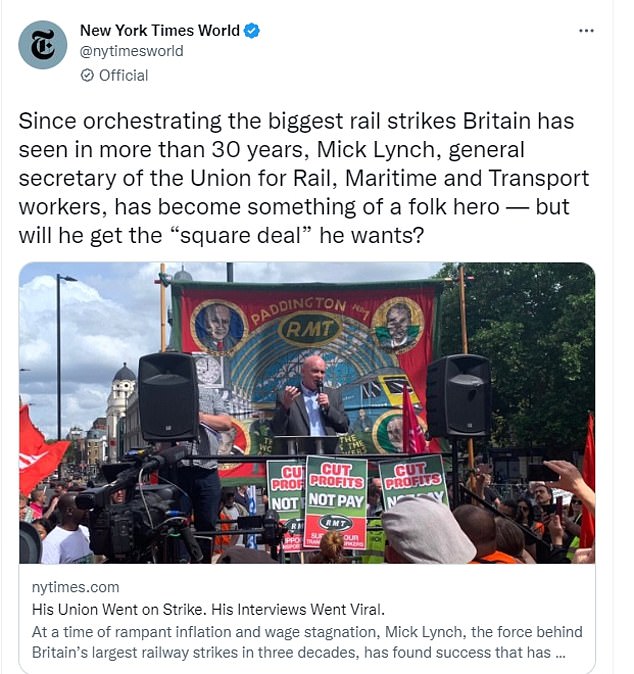 The New York Times has published yet another anti-Britain story, this time stating the nation is ‘languishing’ and hailing strike-happy RMT leader Mick Lynch as a ‘national hero’

The general secretary of the RMT said railway employers wanted to make an offer in a bid to break the deadlock. But it was withdrawn by the Government, he claimed.

Mr Lynch said a demand that the RMT accept the widespread use of driver-only trains was included at the last minute, at the insistence of ministers.

Rail employers knew the union would not accept it, he said.

‘The Government has torpedoed the talks. I don’t know if it’s deliberate or incompetence.

‘The employers know what they want to do but they are being instructed by the Government not to do it.’

He said a resolution to the dispute was now further away because of the Government’s ‘intervention’.

Rail union barons have been condemned for targeting passengers travelling home for Christmas by calling new strikes from December 24-27.

More than 40,000 rail workers will walkout from 6pm on Christmas Eve until 6am on December 27. It means those travelling to be with friends or loved ones on Christmas Day should travel before midday the day before if they are travelling across the country or risk not getting there. Normally trains would run until about 10pm. Two 48-hour walkouts next week, on December 13-14 and 16-17 will also go ahead, along with two more on January 3-4 and 6-7. 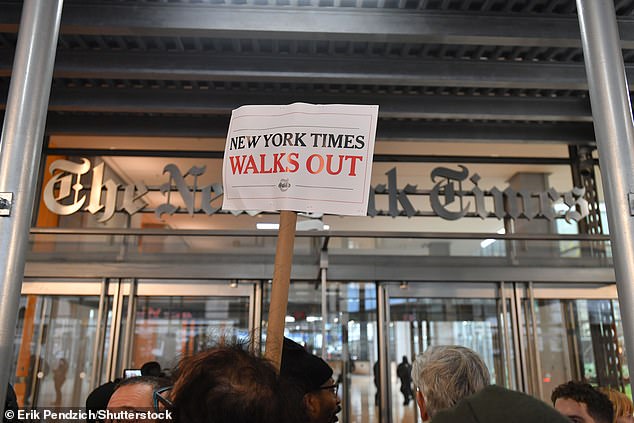 More than 1,000 unionized journalists and other employees at The New York Times began a 24-hour walkout on Thursday, the first strike of its kind at the newspaper in more than 40 years

However, the union cancelled an overtime ban from December 18 to January 2 which could have caused hundreds of last-minute cancellations. Several operators rely on overtime working to run a full timetable.

Mr Lynch added: ‘At the minute we haven’t got anything that’s acceptable to us and we feel we’ve been compelled to take this action because of the intransigence of the government. What we’ve been presented with is an extremely detrimental offer.

‘It’s very poor in relation to the pay elements and our members simply aren’t in a position to accept the changes that the companies have put on the table.’

The RMT claims the train operators’ offer would lead to job losses because it includes accepting the closure of some ticket offices and more guardless trains being rolled out across the network.

Mr Lynch denied that putting the Network Rail offer to members and calling off the overtime ban signalled that he was ‘under pressure’.

But industry insiders said he was facing a growing backlash from workers angered by the overtime ban as it’s a lucrative option for them at this time of year.

Many are also said to be angry at having lost thousands of pounds already due to national strikes the union has been calling for since June. Internal industry estimates suggest some workers stand to lose more than £4,000.

Former Levelling Up Secretary Simon Clarke tweeted: ‘This is dreadful by the RMT – ruining people’s Christmases with an 8% pay rise over two years on the table (and no compulsory redundancies).

‘The railway received £16 billion – £600/household – in emergency funding during Covid and drivers’ median salary is £59k, staff’s is £44k.’ It came as No 10 said it was leaving the door open to tougher anti-strike laws.

But it won’t come into force until next year and does not apply to non-transport sectors.

While there are no current plans to widen its scope, No 10 yesterday said the situation was being kept under review.

The Prime Minister’s official spokesman said: ‘We are keeping under review what is the right balance with regards to strikes. We won’t hesitate to bring forward changes if we judge they are required.’ Sir Keir Starmer rejected calls for tougher anti-strike laws to better protect the public from crippling walkouts.

Speaking in Leeds yesterday, the Labour leader was asked if the party would repeal the minimum services legislation.

He said: ‘I don’t think more legislation restricting the right to strike is the right way forward. I think the Government should fix the underlying problem.

‘The Government should get off its hands, and it’s been sitting on its hands throughout these disputes.’

Rail workers, ambulance staff, firefighters, teachers, security guards, cleaners, porters and driving examiners are also planning action that will affect every day until Christmas. The unions are fighting for sharp pay rises for members to reflect inflation, which is running at 11 per cent.

But government officials say this is unaffordable, and would cost the taxpayer more than £28billion.

Schoolboy, 15, calls for HOMEWORK BAN – because it's ruining his social life