Ofgem boss announces campaign to help households reduce their energy use as bills soar this winter – by telling families to ‘only put heating on when needed, turn off lights when you leave the room and switch off devices’

Ofgem will launch a new campaign to help people understand how they can reduce their energy use and slash bills this winter, the regulator’s boss revealed today.

Chief executive Jonathan Brearley said his organisation was working with energy firms to help them assist customers through what will prove to be a tough winter.

Households in Britain will not pay more than 34p per unit of electricity they use and 10.3p for gas under the Government’s price cap which will last for two years.

However bills will still be twice what they were a year ago as Britons try to keep their homes warm amid the price crisis exacerbated by Russia’s invasion of Ukraine.

For the average household – counted as one with 2.4 people in it – this means they will pay around £2,500 a year, although those that use more will pay more.

Mr Brearley told a conference organised by trade body Energy UK in London today families can save money by, ‘only having your heating on when required, turning off lights when you leave the room and switching devices off standby, for example.’ 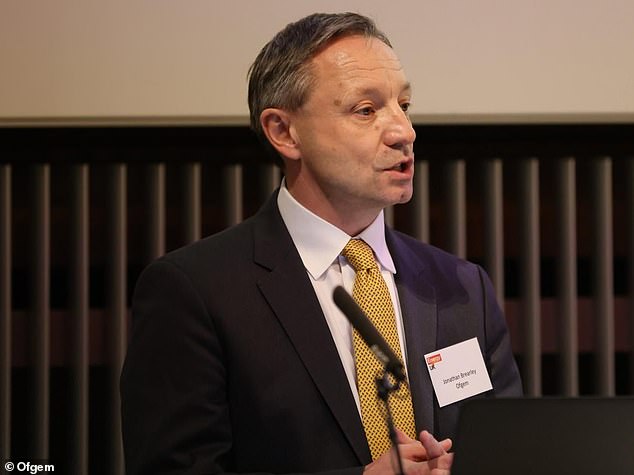 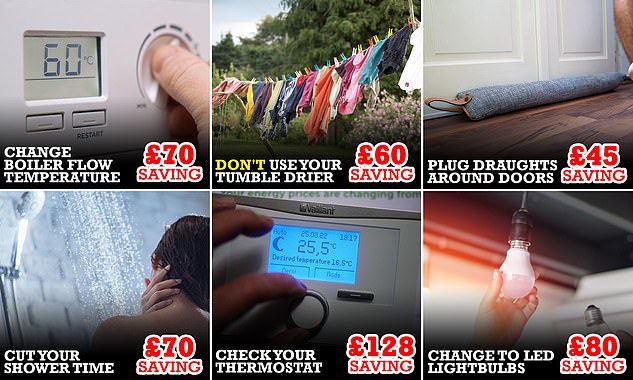 Working out how to use less energy while still staying comfortable will be important for millions of people this winter as the cost-of-living squeeze continues to bite.

‘All of us could be thinking about how to reduce our energy use where possible,’ Mr Brearley told a conference organised by trade body Energy UK in London today.

Energy experts at Octopus have provided a series of eight top tips which they say could save households £488 a year:

Octopus advises that the default boiler flow level which sets the temperature of water when it leaves the unit is normally too high, and can be reduced. Experts say you should turn down a combi boiler to 50C for heating and 55C for hot water, which could save £70 per year. For a boiler and a hot water cylinder, the boiler flow temperature should be just over 60C for heating and hot water, and 60C for the hot water cylinder.

DON’T USE YOUR TUMBLE DRIER

The Energy Savings Trust advises that air drying your clothes on a washing line or clothes horse could save you £60 a year instead of using a tumble drier.

You could save £45 a year by avoiding wasting energy by plugging gaps around doors and windows that could cause drafts, Octopus says. You can find draughts using the back of your hand, or with a thermal camera.

Using your thermostat as an on/off switch or boost for energy can cause more gas to be wasted.  Octopus advises that you should set it and leave it on when it’s required – leaving it between 18C and 21C. It says turning down the temperature by 1C could save you £128 a year.

A typical household could save £70 a year by reducing the time spent in the shower to four minutes.

Changing to LED lightbulbs when its time to replace bulbs can saved between £5 to £13 per bulb per year, according to the Energy Savings Trust. Experts say another £20 per year can be saved by ensuring you switch off the lights when you leave the room.

Experts say an 80mm-thick jacket for your hot water cylinder could save £35 a year. A foam tube can also be used to insulate exposed hot water pipes.

Pulling your curtains before it gets dark can also help your home retain more heat with less energy.

‘This is not only the most direct way to reduce our bills. It directly helps with security of supply, contributes to decarbonisation and saves money for the public finances.’

He said that innovation foundation Nesta recently launched a campaign to convince people to reduce their boiler’s flow temperature which can save cash without reducing the temperature inside homes.

‘They claim that you can save roughly 9 per cent on your gas bill if you do so and if many of us do this it could save £9billion for His Majesty’s Treasury.’

Mr Brearley added: ‘Organisations such as the Energy Saving Trust recommend only having your heating on when required, turning off lights when you leave the room and switching devices off standby, for example.

‘Ofgem is working with the energy sector and interested groups to help consumers navigate this information and we will shortly be launching a campaign to explain the support available, how to reduce energy consumption, and what customers should expect from their providers.’

It comes as Liz Truss is expanding a public information campaign to save energy this winter despite rejecting Jacob Rees-Mogg’s plans over Government concerns they were too ‘nanny state’.

The Prime Minister said yesterday that the Energy Secretary is working on a plan to advise people and businesses how to ‘use energy more efficiently’.

Government sources had previously ruled out a public information plan amid reports Downing Street was blocking a £15million campaign proposed by Mr Rees-Mogg.

Downing Street now says plans from the Department for Business, Energy and Industrial Strategy (Beis) will be incorporated into an existing scheme.

The advice will come following warnings there could be planned three-hour blackouts to ensure the national grid does not collapse over pressure from the war in Ukraine.

Ms Truss replied: ‘Well (he) is absolutely right and I know the Energy Secretary is working on a plan to help companies and individuals use energy more efficiently.

‘We’re also working on this across Government, I was delighted to speak to my friend yesterday and I hope we’ll be able to start this going in No 10 straight away.’

The Prime Minister’s official spokesman said they are considering how to ‘further expand’ the existing ‘help for households’ advice website with guidance from Beis.

Pressed if Mr Rees-Mogg’s proposal is being folded into the current plans, the spokesman said campaigns are ‘iterative and we’ve been discussing how to expand it’.

The Times had reported his own campaign had been blocked by Downing Street over Ms Truss’s fears it would be too interventionist.

Asked on LBC last week why the PM would block a public information campaign, climate minister Graham Stuart told LBC radio ministers are ‘hesitant’ to tell people what to do, adding: ‘We’re not a nanny state Government.’

Meanwhile the chief executive of the energy trade body has called on the Government to proceed ‘carefully’ when putting a cap on how much revenue wind farms can make to avoid repeating past mistakes which put off investment in the UK.

‘Cuts to green policies in 2015 have added to the cost of bills today,’ she said at the Energy UK conference.

‘It seems scarcely believable to me that we would make the same mistakes again with, for example, reforms that make it harder or ban cheap solar power. False narratives often lead to false economies.’

Reports in recent days have suggested that the Government could ban farmers from putting solar panels on their land. 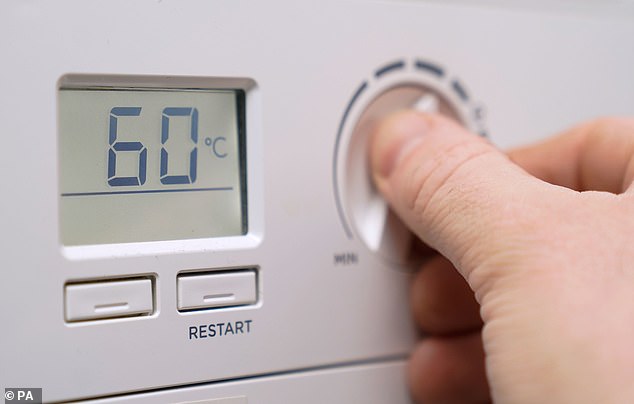 A person turns down the temperature of a gas boiler in Basingstoke, Hampshire (file image)

Ms Pinchbeck said: ‘On which note it is also very important that the Government proceeds carefully with the revenue cap on low carbon generators and other measures announced in the energy price Bill.’

On Tuesday the Government announced that it would put a ‘cost-plus-revenue’ limit on what some wind and solar farms in England and Wales could make.

The Government insists that the policy is not a windfall tax, however industry figures say that it amounts to one.

‘Secret committees’ are out as Grammy organisers change the rules