One in five workers at care homes have still not even had their FIRST Covid jab, new figures show

More than a fifth of care home staff in England have still not had a coronavirus vaccine, figures reveal.

NHS England data shows that 78.9 per cent of eligible workers at older adult care homes had been given a first jab by April 4.

It is an increase from 69 per cent on February 14 – but has caused concerns of low take-up rates.

Ministers have refused to rule out making vaccines compulsory for care home staff, who are all entitled to have the jab if they have not had Covid in the past four weeks.

The vaccination rate among staff is significantly less than the 94.1 per cent rate of residents to have been inoculated with their first dose. 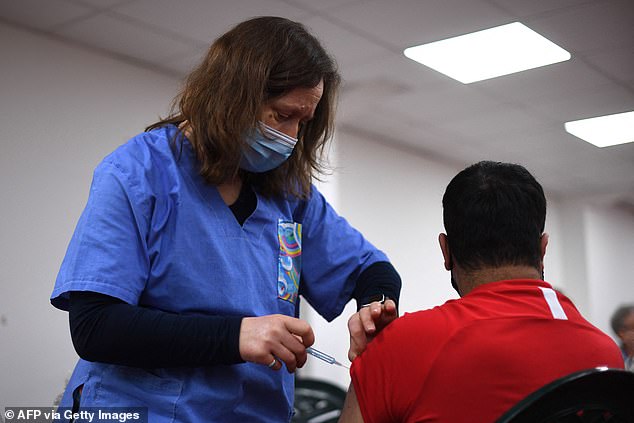 The government could make it a legal requirement for care workers to get vaccinated, Matt Hancock has confirmed (Pictured: A man gets vaccinated in London)

Health Secretary Matt Hancock was today encouraged by the figures but urged more staff to get jabbed.

He told BBC Radio 4’s Today programme: ‘I’m very pleased to say that the uptake of the vaccine in care home workers is now 80 per cent, four in five.

‘There’s still more work to do but I’m very grateful to the care home workers who’ve been coming forward.’

Pressed on whether jabs could be made compulsory for care workers, he said: ‘We haven’t made an announcement on that, we haven’t said anything about that.

‘But the uptake has been going up and that’s very important.’

Pete Calveley, CEO of Barchester Healthcare, which has introduced a controversial ‘no jab no job’ policy, said the human rights of people living in care homes were at stake and staff must protect them.

Residents in a care home for older adults and their carers are the top priority group in the vaccination programme.

The data also showed that 67.8 per cent of eligible staff of older care homes in London are estimated to have received their first jab – the lowest region in the country.

Lambeth in London was the local authority reporting the lowest proportion of eligible older adult care home staff given a first dose, at 51.6 per cent by April 4. 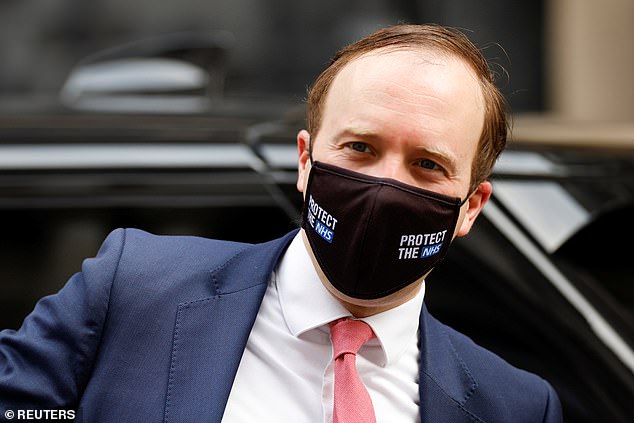 This compares with Blackpool, which had the highest proportion in England, at 91.0 per cent.

For social care staff working in other settings in England, including non-registered providers, the figure is 68.8 per cent.

Meanwhile 88.0 per cent of residents at younger adult care homes in England had received their first dose of a Covid-19 vaccine by April 4, the NHS England data showed.

The region with the highest rate was the East of England at 91.0 per cent while the lowest was the North West at 85.6 per cent, the figures showed.

The local authority with the lowest proportion of younger care home residents given a first dose was Blackburn with Darwen at 57.1 per cent, followed by Barnet at 67.0 per cent.

This compared with Slough, where 100 per cent of residents had received a first jab.

WHY ARE PEOPLE WORRIED ABOUT VACCINES?

One reason some people are fearful of having a vaccine is the risk of side effects.

Things like fever, aches, headache and tiredness are all normal signs that the immune system is reacting to something and are often caused jabs but are not serious. They tend to clear up by themselves within days, and can be controlled with drugs like paracetamol and ibuprofen.

A tiny proportion of people suffer more severe side effects, such as going into shock or having a severe allergic reaction, but this is extremely rare and usually only happens in people with a history of bad reactions.

Everybody who receives a jab on the NHS is monitored for at least 15 minutes to make sure they don’t have a bad reaction, and vaccination teams have treatments on hand to help if this happens.

Part of the reason for young women being concerned is understood to be myths about the vaccine affecting fertility or the health of unborn babies.

Although vaccines are not recommended for pregnant women, this is only because they have not been trialled on them specifically – the same reason children are not eligible for the jabs.

There is no evidence to suggest the vaccine would be capable of harming an unborn child – and certainly not any more than the real coronavirus – but it is not being given to pregnant women out of caution.

And on long-term effects on fertility, Professor Van-Tam said no vaccine has ever led to infertility and there was no reason the Covid ones would do so.

Online conspiracy theories also claim that jabs have tracking microchips in them, contain animal products or use cells from human flesh – none of which are true.

Experts have called for spreading lies about vaccines online to be criminalised, and Prime Minister Boris Johnson called it ‘total nonsense’.

UK Covid deaths drop 45 PER CENT in a month as 45 more people die and another 2,763 test positive