One of England’s ‘first ever’ gold coins that dates back to 1257 and bears Henry III’s portrait is expected to sell for over £700,000 at auction

An extremely rare example of England’s ‘first ever gold coin’ is expected to sell for over £700,000.

The Henry III coin was struck in about 1257 by William of Gloucester with gold imported from North Africa.

It displays the portrait of the bearded and crowned King clenching a sceptre on the front, with his name marked around the edge. 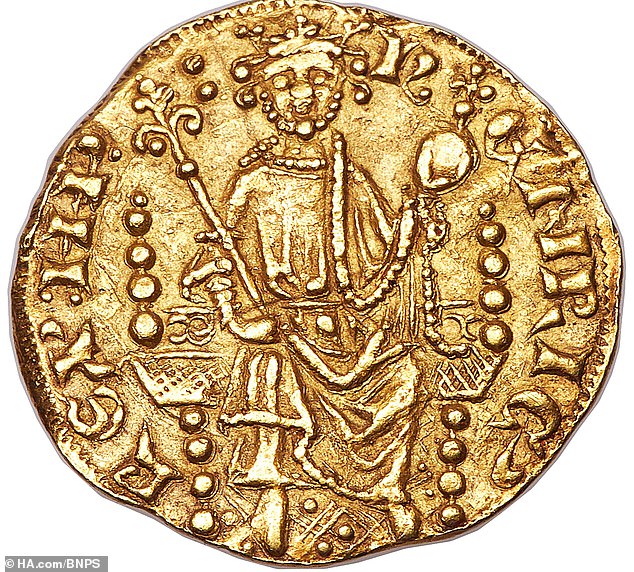 The front of an extremely rare example of England’s ‘first ever gold coin’ which dates back to the 13th century and the reign of Henry III. It is expected to sell for over £700,000 at auction

Coins have been used as a form of currency in Britain since the second century BC as a result of trade between the Celtic tribes in Britain and Gaul.

When the Romans began its subjugation of Britain in 43AD, Celtic coinage came to an end and Roman coins were used, mostly imported from the continent.

In 973 AD, Edgar became the first king of a United England and every new coin in England was issued in his name at one of around seventy mints active in the country.

From 1247, Henry III introduced the ‘long cross’ design, as seen on the reverse of this coin, in a bid to discourage ‘clipping’ – shaving the edges of coins without it being noticeable.

In order to achieve this, he instituted a great recoinage and melted down huge quantities of the old ‘shortcross’ designs on pennies dating back to Anglo-Saxon times so that they could be reminted.

There is a long cross, roses and pellets on the reverse.

The coin has been said by numismatists – coin experts – to show the first ‘true’ portrait of an English King.

It was minted at twice the weight of a silver penny and valued at 20 pence, which equates to about £60 in today’s money.

However, most were melted down after falling out of circulation following Henry III’s death, as the weight of gold was worth more than the value of the currency.

There are now just seven known surviving examples – the others are in the British Museum in London, the Fitzwilliam Museum in Cambridge, and private collections.

The coin, which is just under an inch in diameter, is going under the hammer with Heritage Auctions, of Dallas, Texas.

It has been consigned by an American private collector who has owned it for 25 years.

Cristiano Bierrenbach, specialist at Heritage, said: ‘The gold pennies of Henry III represent a fascinating period in medieval numismatics when gold was beginning to trickle back into European commerce after a dearth of nearly 500 years.

‘Henry III ordered the creation of a gold coin for his kingdom to be struck at twice the weight of a silver penny and valued at 20 pence.

‘It has a wonderful portrait of him and is in incredible condition – you would never think it was 800 years old.

‘This coin is of the utmost rarity, and one of the most fabled coins in all of British numismatics. 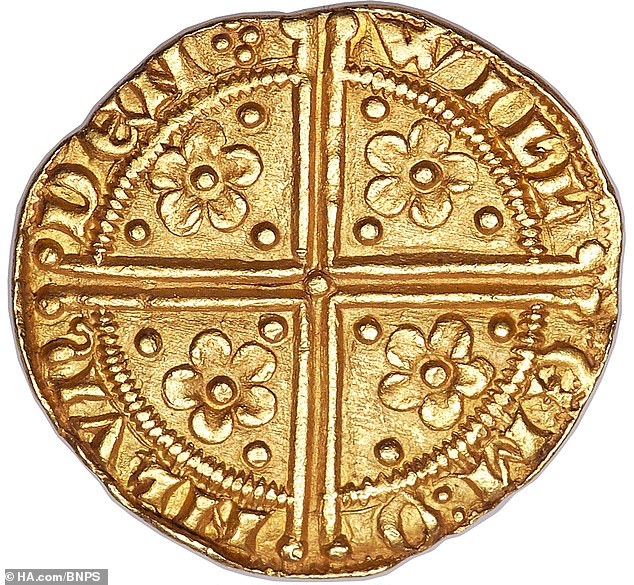 Pictured: The rare coin’s reverse side features a ‘long cross’ and four five-petalled roses as well as the mark of King Henry III’s goldsmith, William of Gloucester, around the coin’s edge

‘We have been able to locate only seven pieces remaining of this issue, with this likely being the finest known.

In the 1240s and 50s he demanded that all payments be made in gold to build up treasures for major overseas projects.

The timed auction ends on Thursday.