One of Britain’s most prolific criminals dubbed ‘Billy the Pigeon’, 45, is jailed for two years after clocking up 450 convictions including 100 burglaries

A career criminal, thought to be among Britain’s most prolific, has been locked up for two years.

William Frederick Armstrong, dubbed ‘Billy the Pigeon’, of Britannia Place, Elswick, Newcastle, was caged having stacked up more than 450 offences.

The 45-year-old was jailed this time however after admitting to eight counts of burglary at Newcastle Crown Court.

His conviction was his 100th for burglary. His criminal career dates back to 1996. 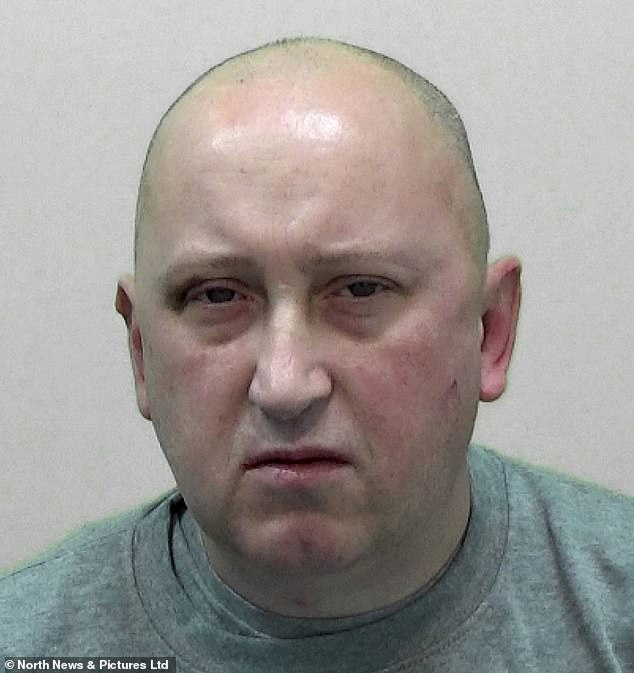 William Frederick Armstrong, dubbed ‘Billy the Pigeon’, of Britannia Place, Elswick, Newcastle, was caged after stacking up more than 450 offences

Armstrong is said to have carried out a ‘campaign’ of burglaries throughout Newcastle city centre.

The serial criminal has a particular penchant for stealing alcohol, cash, and designer watches.

In his latest spree Armstrong began by swiping a bottle of Sipsmith Gin, worth £25, from Byron Burger, in June, 2019.

In July of that year he stole from Revolución de Cuba in Newcastle, three bottles of spirits, worth a total of £79.

In the same month Armstrong stole a pair of watches worth £2,635 from Goldsmiths jeweler in the city, and days later attempted to steal from a cash box at the Theatre Royal.

Then, in September 2019, Armstrong swiped a bottle of gin from the Maldron Hotel in Newcastle, before going on to steal six bottles of spirits from city bar Pleased to Meet You.

Then, in February of this year, Armstrong took 21 bottles of spirits worth nearly £400 during two visits to a Slug and Lettuce pub.

Newcastle Crown Court heard that despite being confronted by staff throughout his spree, being seen on CCTV, and then arrested twice, Armstrong had been bailed pending an investigation – meaning he was allowed to keep his freedom.

His defence lawyer Barry Robson questioned why his client had been released on bail or under investigation after he was identified, which he said led to a ‘much more serious’ accumulative effect for Armstrong.

‘He knows he is well known, he knows he will be identified from CCTV’ argued Robson.

‘It was easily detectable. Releasing him on bail and under investigation is not the way forward for someone who has been identified on CCTV, with a record like his.’

Billy the Pigeon, who got his nickname because his father kept pigeons, admitted eight charges of burglary at Newcastle Crown Court.

At sentencing, Judge Rippon said: ‘Well Billy the Pigeon, you are a burglar by profession, of that I have no doubt.

‘You are completely undeterred by the court’s involvement or orders imposed on you.

‘It is perfectly obvious you are targeting these licensed premises because they can provide you with ready goods, high-end alcohol, which is portable, which is easy to steal and has good resale value for you.

‘It is how you have been making your living.’

His defence lawyer Robson added Armstrong had ‘never been on benefits’ as he cannot complete the necessary forms, and found gin ‘readily resellable’.

Nicholas Lane for the prosecution told the court: ‘The Crown submit he is a prolific offender, he is well known to police officers and members of the local community as Billy the Pigeon.

‘By virtue of these offences he has acquired his 100th conviction for an offence of burglary.’

Armstrong joins a cohort of Britain’s most convicted, including Patrick Ryan, from Accrington in Lancashire, who by 2018 had committed 668 offences over 48 years.

Ryan’s criminal record runs to more than 100 pages, with offences such as theft, dishonesty offences and sexual assault.

‘We tried everything’: infant among three dead in suspicious Point Cook fire