The private operator of Sydney’s light rail system told staff they had put service performance ahead of safety when introducing the trams that shut the line down this month.

The revelation comes as the government tries to work out how cracks formed on all 12 trams servicing the Central to Dulwich Hill line before being noticed while it is under growing pressure over Treasury’s attempt to shift its train network’s costs onto a corporation despite multiple warnings about safety and budgetary risks. 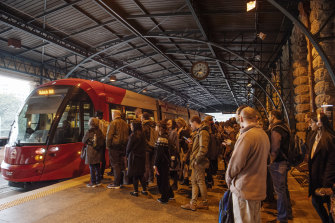 An internal Transdev Sydney note said there was a rise in the number and severity of safety incidents in the three months before it brought the now-cracked trams into service in July 2014.

“Our investigations into what and why these incidents have occurred show that, on many occasions, we’ve put network demand ahead of the safety of our staff and passengers,” the note, obtained by the Herald, said.

These concessions were made the same year Transdev Sydney was selected by Transport for NSW to operate and maintain the new CBD and South East light rail. Two years later, it was awarded the contract to supply, operate and maintain stage one of the Parramatta Light Rail due in 2023. 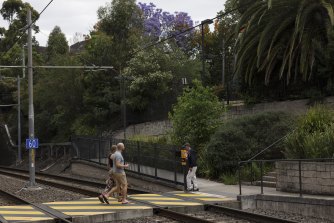 Arlington Light Rail Station on the now-closed L1 light rail line, which is being serviced by replacement buses for 18 months.Credit:Brook Mitchell

Transport Minister Rob Stokes said the idea of putting network demand ahead of safety was “unacceptable and outrageous”.

“It would have been unacceptable in 2014 and it remains so today,” he said.

Tram expert and former government light rail adviser Greg Sutherland said the priority of private operators was to make money for their shareholders, so the government must make sure the services it was paying for remained safe.

“You can outsource how you do something, but you can’t outsource the ultimate responsibility,” he said. “That monthly payment is millions of dollars but what checks are being done before the money is handed over?

A Transdev Sydney spokesperson said it was misleading and wrong to conflate an employee newsletter with commentary on the overall performance and state of the network.

“Safety has always been our number one priority and Transdev Sydney continues to maintain a strong safety record,” they said.

“The internal employee newsletter was aimed to highlight the importance of a safety culture within the light rail network.

“The examples given related to isolated practices and not directions or decisions taken by the company due to any network or other pressures.”

Labor transport spokeswoman Jo Haylen said the document showed the latest shutdown was a symptom of long-term mismanagement of the public asset which had now had to shut down entirely.

“This network has been run into the ground,” Ms Haylen said.

“The government’s asset management plan already revealed that the inner west’s trams are inspected just once a year; now we know that passenger safety and the integrity of the network have come second since 2014.”

Another staff memo described a “noticeable increase” in trams running through stop signals. The note said such events “can be as serious as a matter of life or death” and were happening almost monthly six months after the opening of the line’s extension to Dulwich Hill in March 2014.

Meanwhile, Transdev Sydney encouraged drivers to “look ahead. Is it red?” .

A Transport for NSW spokesperson said safety was not negotiable at the government agency and the tender process would have adopted this absolute requirement then assessed other criteria as set out in the assessment matrix.

They said there were a number of checks and balances for Transdev’s performance, including monthly contract reports and meetings where safety performance was on the agenda, and mandatory reporting of safety incidents to the Office of the National Rail Safety regulator.