BREAKING NEWS: ‘Kim and his evil regime ARE responsible.’ Otto Warmbier’s parents condemn Trump for taking Kim at his word that he knew nothing about their son’s death

The parents of former North Korean captive Otto Warmbier, an Ohio college student who died days after he was released into U.S. custody, lashed out at Donald Trump on Friday for his deference to the ‘evil’ and dictatorial regime.

Fred and Cindy Warmbier were once close to the Trump administration — they sat in the first lady’s box during the president’s State of the Union address in January of 2018.

However, Trump drove a wedge in the relationship with a declaration in Vietnam that he believed Kim Jong-un’s claim that he had knowledge of their son’s condition, the Warmbier family indicated. 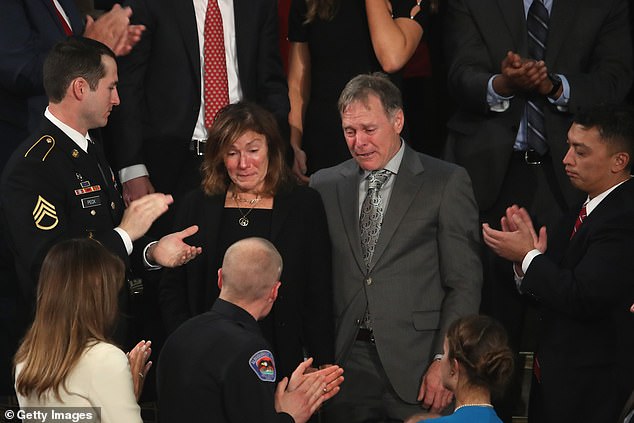 The Parents of Otto Warmbier, Fred and Cindy Warmbier are acknowledged during the State of the Union address in the chamber of the U.S. House of Representatives January 30, 2018 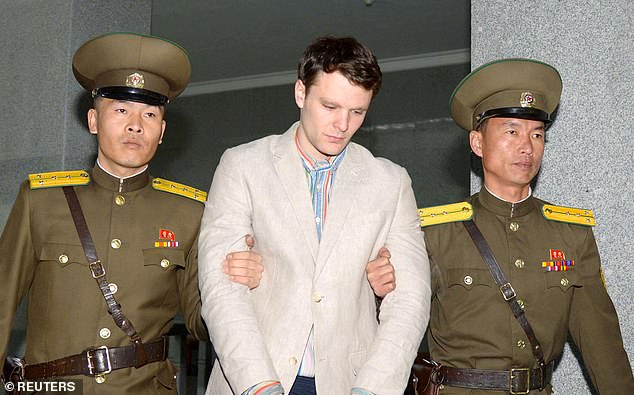 Donald Trump said he spoke with Kim Jong-un about Otto Warmbier, a U.S. student who fell into a vegetative state while in North Korea custody, and the dictator said he was not involved

Trump said during a Vietnam presser that he spoke with with Kim about Warmbier, who fell into a vegetative state while jailed in North Korea and came back to the U.S. in a coma.

The President admitted that while ‘some really, really bad things’ had happened to the University of Virginia student, Kim denied any involvement in the case.

‘He tells me that he didn’t know about it, and I will take him at his word,’ Trump told reporters in Hanoi after his summit with the dictator collapsed without a deal to eradicate North Korea’s nuclear stockpile.

Sen. Rob Portman, a Republican who represents Ohio in the U.S. Senate, condemned the president’s statements in a floor speech on Thursday. He shares his hometown with Warmbier’s parents.

‘This is an emotional issue for me because through the process of trying to bring Otto home I got to know his family very well,’ Portman proclaimed. ‘He was a young man with a lot of promise.’

Going over the details of the case, he said he supports ‘engagement with North Korea’ now more than ever before. ‘In fact my experience with Otto Warmbier makes me even more convinced that we need to be in communication because we had no good lines of communication.’

Portman said, ‘I support the ongoing talks with North Korea, specifically about denuclearization. But I want to make clear that we can never forget about Otto. His treatment at the hands of his captors was unforgivable and it tells us a lot about the nature of this regime.

‘We can’t be naive about what they did to Otto, about the brutal nature of the regime that would do this to an American citizen, and it’s not just about Otto and other visitors, it’s about how the people in North Korea are treated.’

‘But I also want to say today as we discuss these broader issues with North Korea, let’s keep Otto Warmbier at the front of our minds. Let’s be sure that he is high on our agenda and in our consciousness as we deal with North Korea and again understanding, because of our experience with Otto, the brutal nature of this regime,’ Portman said in the floor speech.

Ohio’s other Sen. Sherrod Brown, a Democrat, told ABC News in the hallway of the Senate that he couldn’t understand why Trump likes Kim so much.

‘I mean the president seems to gravitate toward autocrats like Putin, and the Crown Prince and Saudi Arabia and the North Korean dictator instead of speaking out on human rights,’ Brown said.

‘I mean you never should go meet up with the North Korean dictator without brining up the name Otto Warmbier, and bring up the whole issue of human rights, over and over,’ he asserted.

Brown said that past presidents of both parties had made human rights a top focus of their conversations with autocrats and it makes him ‘sad’ that Trump doesn’t appear to be following in their footsteps.

He said Trump is sending a message ‘that he believes autocrats when they lie or when they cover up’ or take malign actions they want to justify.

Trump has repeatedly taken foreign adversaries he’s built a personal relationship with at their word over the advice of U.S. intelligence that tells a different story.

Scans of Warmbier’s brain before his death revealed extensive brain damage associated with an unexplained trauma that American neurosurgeons were not able to pinpoint.

Warmbier died on June 19, 2017, in Cincinnati at the age of 22 after his parents opted to remove his feeding tube.

The student was studying abroad when he was taken into custody in North Korea. He was at the airport, preparing to board a plane when he was arrested for taking down a propaganda poster at his hotel.

He admitted to the act, which is considered a serious crime in North Korea, in a taped confession on Feb. 29, 2016. The next month, he was tried and convicted in a North Korean court.

The U.S. State Department said at the time that it was evident that North Korea arrested Warmbier to make a political statement.

It wasn’t until Trump took office that the U.S. secured Warmbier’s release, in June of 2017.

North Korean officials claimed several days prior to his return that he’d come down with food-borne botulism that he fought off with a sleeping pill. Experts in the U.S. could find no such evidence, although they said they could not rule it out, and determined that he’d most likely experienced a trauma that led to oxygen deprivation in his brain.

After his death, Pyongyang claimed that it had been wrongly accused in a ‘smear campaign’ as Warmbier’s treatment in prison had been nothing but ‘humanitarian.’

‘Although we had no reason at all to show mercy to such a criminal of the enemy state, we provided him with medical treatments and care with all sincerity on humanitarian basis until his return to the U.S., considering that his health got worse,’ a regime spokesperson said. 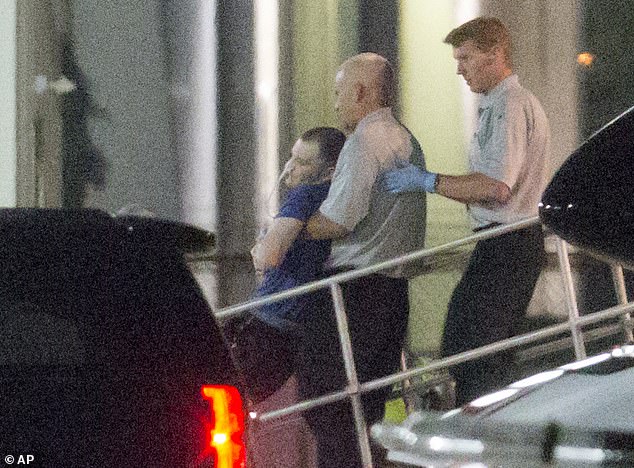 Warmbier was returned to the US in a vegetative state (pictured) which North Korean authorities blamed on botulism, a rare bacterial infection that can be fatal

Trump claimed in 2017, after Warmbier’s release, that the boy had been ‘tortured beyond belief’ and belittled Kim as Little Rocket Man.

The U.S. passed legislation barring Americans from traveling to North Korea after the student’s death, and a led a U.N. charge to introduce heft sanctions on Pyongyang for its illicit nuclear program.

In early 2018, the relationship between the U.S. and North Korea began to change after Kim extended an olive branch to the South when the neighboring democracy hosted that year’s Winter Olympics.

By that summer Trump and Kim were exchanging private letters.

They met in person for the first time in Singapore in June of 2018 after Trump hosted a North Korean delegation at the White House for talks on nuclear disarmament.

The leaders have continued to converse through letters that Trump says turned he and Kim into great friends.

‘We had probably the toughest language in the history of diplomacy … at the beginning, and yet, we became very friendly,’ he recalled in Vietnam at the conclusion of their latest summit.

Prior to the talks in Vietnam, the president called Kim a ‘friend’ in a tweet. Asked in Hanoi about the message, in the context of Warmbier’s death.

Trump said, ‘We have talked about it. And I really don’t think it was in his interest at all.

‘I know the Warmbier family very well. I think they’re an incredible family. What happened is horrible. I really believe something very bad happened to him,’ he admitted, ‘and I don’t think that the top leadership knew about it.’ 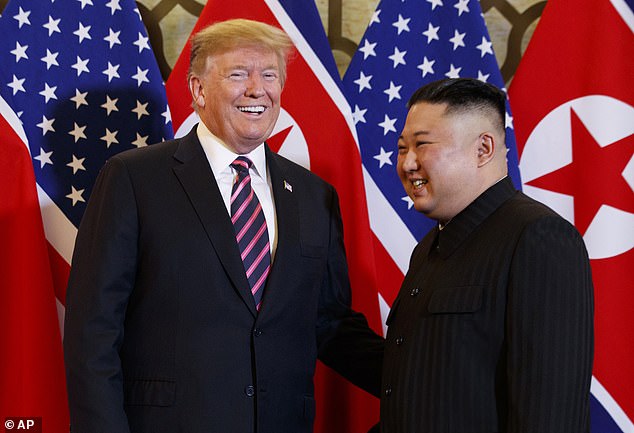 Kim expressed remorse for Warmbier’s death, Trump revealed. ‘He felt badly about it. I did speak to him. He felt very badly’

‘I thought it was horrible,’ he said. ‘Otto came back in a condition that was just, just terrible.’

Trump told the reporter, who’d asked if he confronted Kim about the matter, ‘I did speak about it, and I don’t believe that he would’ve allowed that to happen. Just wasn’t to his advantage to allow that to happen.

‘Those prisons are rough. They’re rough places. And bad things happened. But I really don’t believe that he was — I don’t believe he knew about it,’ the president asserted.

Kim expressed remorse for Warmbier’s death, Trump revealed. ‘He felt badly about it. I did speak to him. He felt very badly.’

Trump cut the reporter off as he tried to ask a follow-up question about the president’s belief that Kim was in the dark.

He stated flatly before moving on: ‘He tells me that he didn’t know about it, and I will take him at his word.’ 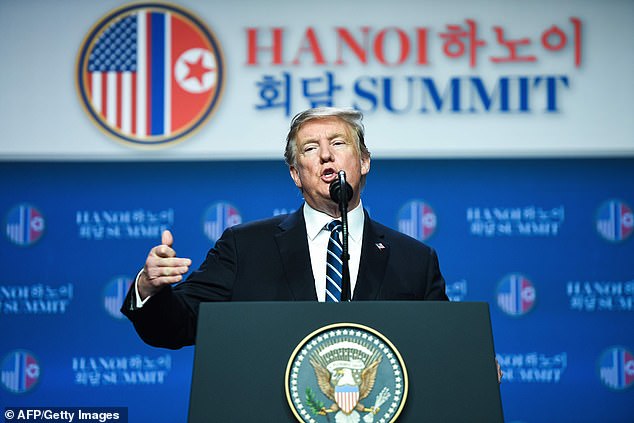 Trump acknowledged that some ‘really, really bad things’ happened to Warmbier but added: ‘[Kim] tells me that he didn’t know about it and I will take him at his word’ 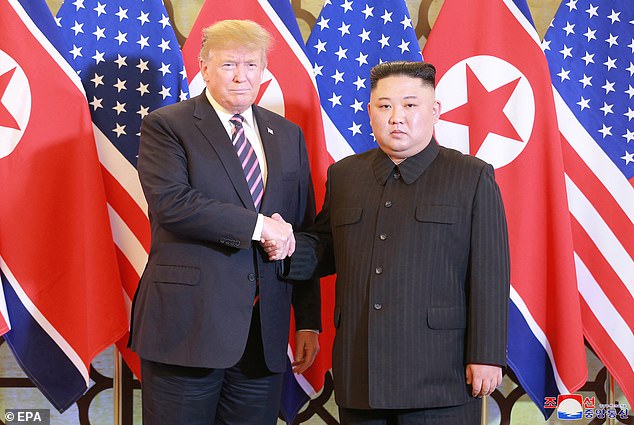 Trump spent the last two days in meetings with the North Korean leader in an attempt to negotiate a deal for the country to give up its nuclear weapons, but ultimately failed 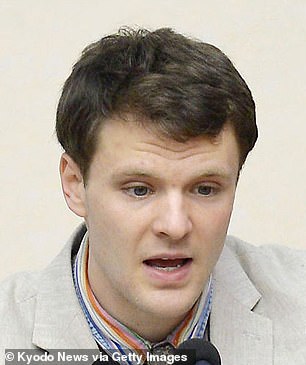 Warmbier traveled to North Korea from China while completing a study abroad program in Hong Kong at the end of 2015, as part of a tour group that included ten other Americans.

The group celebrated New Year’s Eve in Pyongyang, and at some point during the stay, Warmbier took down a propaganda poster from the wall of his hotel that he planned to take home as a souvenir.

He was arrested at Pyongyang airport shortly after, before tearfully confessing on North Korean television that he had taken the poster after six weeks in detention.

A court sentenced Warmbier to 15 years in prison with hard labor for his confessed crime.