Vandals in Oxford have been caught on camera as they turned to arson in a night time attack – setting fire to a bollard in a low traffic neighbourhood which restricts traffic to motorists.

Drivers destroyed 20 bollards over less than three weeks – with vans and cars driving over the barriers, one vandal ripping a bollard out of the ground and walking it off with it.

A vandal set the bollard alight after 11pm on a Sunday night in July on Howard Street in east Oxford.

A spokesperson for DPD told MailOnline: ‘It is unacceptable behaviour and the local depot is investigating that particular incident. We have reminded all drivers in the area to respect the low traffic neighbourhood initiative and route accordingly.’

Local taxpayers have now had to pay £100,000 to replace the destroyed plastic bollards with steel ones to thwart potential vandals as Oxfordshire County Council condemned the ‘unprecedented levels of vandalism’.

The steel bollards will still allow emergency services to enter the road when needed. 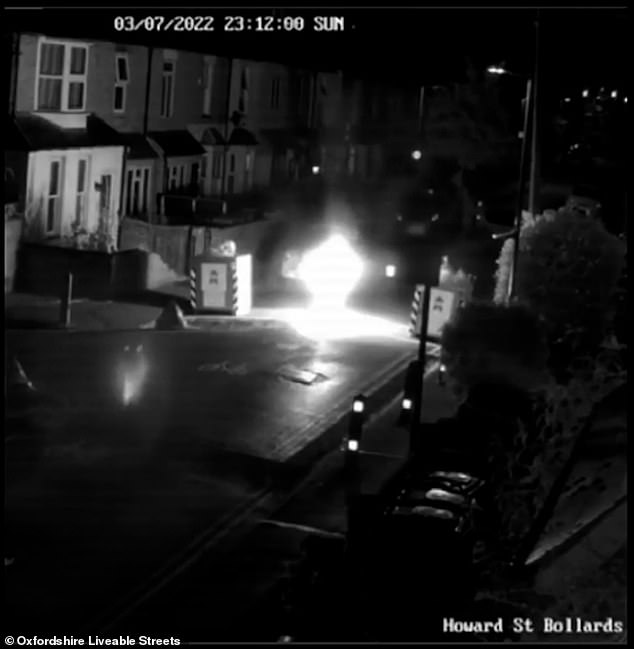 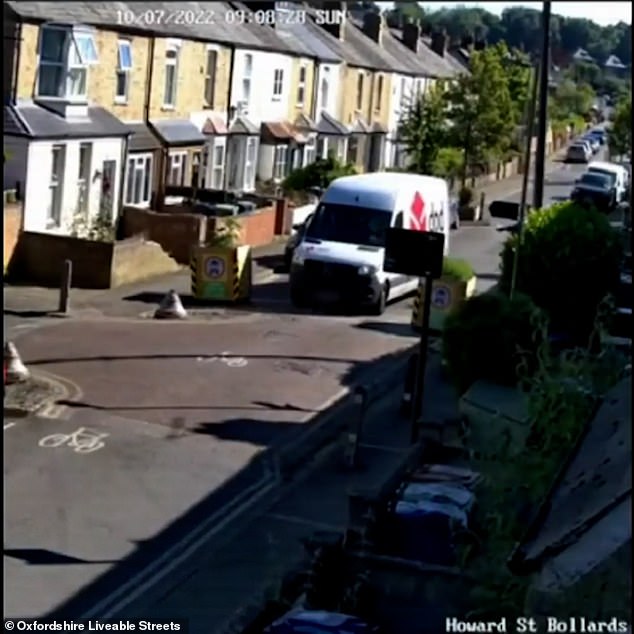 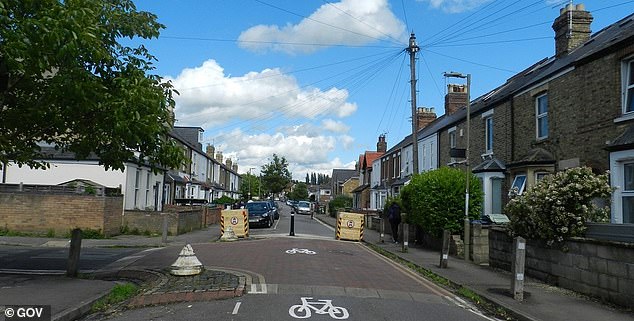 The plastic bollards installed to create the low traffic neighbourhoods will now be replaced with steel ones costing Oxfordshire County Council £100,000

Josie Proctor, a driver, cyclist and mother who lives on Howard Street, said that she was worried that children cycling to school could end up in car accidents after the bollards were vandalised.

She said: ‘My main concern is that by vandalising bollards they put vulnerable road users like kids cycling to school in danger as they don’t expect a car barrelling towards them where they expected a filter. I’ve seen so many near misses, it’s only a matter of time before someone gets seriously hurt.

‘I recognise the LTNs are a contentious issue. Protesting is one thing, but these mindless thugs have cost taxpayers £100,000 to replace the barriers with steel bollards and many hours of police and council workers’ time which could be better used.

‘We have submitted the unredacted footage with number plates and faces visible to the police so they can tackle this criminality and get some money back to the public purse, as well as deter others and make the roads safer.

‘We’re really pleased that councillors are now installing steel bollards that will be much harder to destroy but we’d like to see some official cameras installed that could catch and fine those that flout the rules and the thugs that destroy public property and endanger lives.’

‘We ask the vandals as one neighbour to another to please respect the trial and help keep all those walking and cycling on these roads safe.’

Elizabeth Mills, 71, who lives in the Divinity Road low traffic neighbourhood said: ‘I’m ambivalent about the LTNs; in some ways they make my life better, and in some ways more difficult. However, what really makes me angry is the vandalism. I simply don’t think people should go around breaking the law because they disagree – call me old fashioned but I don’t!’

Local residents’ group Oxfordshire Liveable Streets have contacted DPD to urge them to investigate the matter and are asking all taxi firms to respect the LTN regime currently in place.

The plastic bollards were originally installed following consultation with the emergency services in order to reduce the amount of time it takes to remove the bollards in case of access being needed by the police, fire service or paramedics. 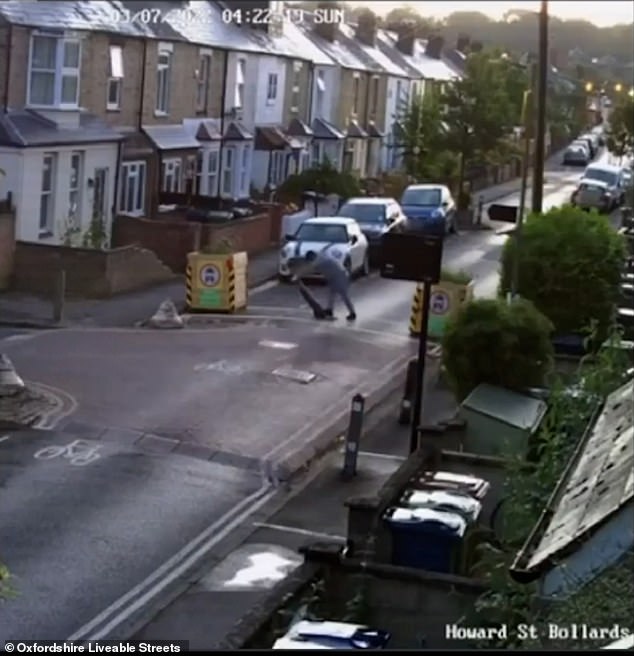 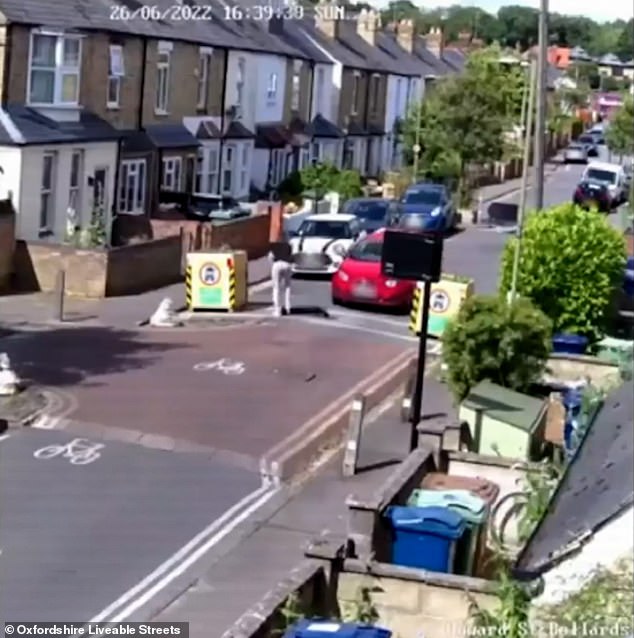 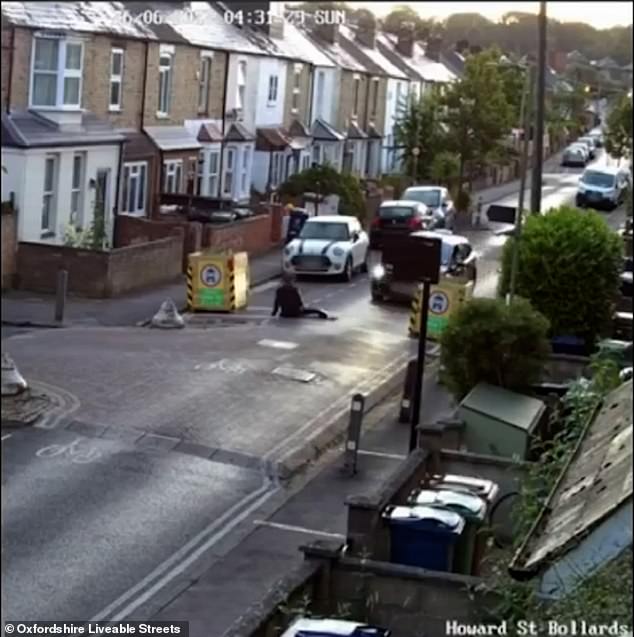 While vandals have been vandalising and damaging the bollards in the schemes, the LTNs have proved popular with local residents and those in the rest of the city, according to a YouGov poll which saw a majority back the LTNs by two to one.

Some residents have also shown their commitment to the LTNs, by acting as ‘human bollards’ to stop car and van drivers continuing to drive through the areas illegally.

A number of locals took matters into their own hands to protect cyclists, pedestrians and children from drivers flouting the rules, sharing a video on social media about the actions which generated 35,000 views.

Robin Tucker, Chair of the Coalition for Healthy Streets and Active Travel (CoHSAT), said: ‘One thing we shouldn’t forget is that the criminal action we see being perpetrated here is by a small number of nasty criminals. A minority of people oppose these measures, and an even smaller minority of those people commit these acts of vandalism.

‘It’s worth remembering that independent polling conducted by YouGov showed that residents in Oxford support the low traffic neighbourhoods by a majority of two to one.’

Nearly six in ten people living across Oxford support low traffic neighbourhoods such as those installed in east Oxford almost six months ago, around twice as many as oppose them.

A survey carried out by YouGov on behalf of Oxfordshire Liveable Streets showed that 56% of respondents supported LTNs, while only 29% opposed them.

The data also showed that all age groups supported the LTNs, with younger residents (aged 18-34) backing them by a large majority, while older people (over 55s) also backed them, though by a smaller majority (49% to 44%).

The LTNs are slightly more popular with men than women, with 60% of male respondents supporting, compared to 52% of female respondents. Across both genders, just 29% of both women and men opposed LTNs. 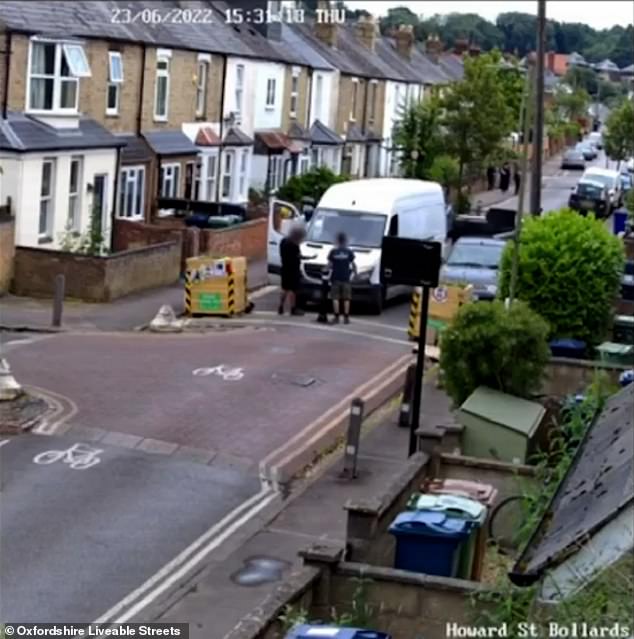 On the topic of the new steel bollards, Oxfordshire County Councillor Andrew Gant, Cabinet Member for Highways Management said: ‘This is a key moment in the continuation of the LTN trial in east Oxford.

‘Ongoing damage has come at a significant cost to both the council and Thames Valley Police in both time and money, with potentially serious consequences for people’s safety.

‘Damage to the bollards and persistent use of the low traffic neighbourhood streets as through-roads is not only a risk for the safety of road users but impacts monitoring data quality, which could delay the decision on the trial.’

Rob MacDougall, Chief Fire Officer for Oxfordshire Fire and Rescue Service added: ‘The Fire and Rescue service is aware of the plans to replace the existing plastic bollards for the east Oxford LTNs with steel ones. Emergency services will still be able to remove these metal bollards to gain access when needed.

‘When the existing bollards have been damaged by being driven over or vandalism to the locking mechanism, it has taken up valuable time when we have needed to gain access.’ 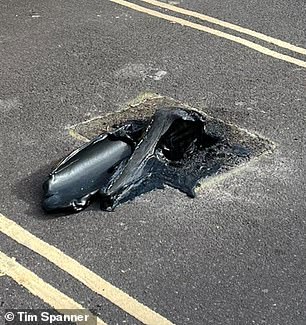 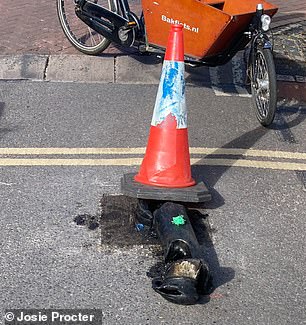 A bollard on Barnet Street (left) in Oxford was melted by a hooded group of arsonists in July. A bollard on Howard Street (right) was also damaged then

A hooded gang of were seen melting traffic-calming bollards in Oxford in July as a mounting public backlash against the scheme in the city reached ‘another level’.

By July the trial of three low-traffic neighbourhoods (LTNs) in the Divinity Road, St Clement’s and St Mary’s areas that began in May had already proven divisive.

And by then the council had already spent £12,000 replacing or repairing street furniture such as bollards and planters which had been vandalised.

Thames Valley Police has been contacted for further comment.

You Can Now Get Anti-Anxiety "Beta-Blockers" Online — Are They Safe?