Home » Paraglider, 53, died as he hit turbulence and plunged to his death

Experienced paraglider, 53, died as he hit turbulence at 40mph and plunged 200ft to his death after he made a ‘split second decision’ to land at Lake District beauty spot, inquest hears

An experienced paraglider died after hitting turbulence while traveling 350 feet in the air above the Peak District.

Timothy Ogden, 53, went into an ‘unrecoverable spin’ and started to freefall at 200 feet when his chute ‘collapsed’ during a sudden change in wind direction above Windy Knoll near Castleton, Derbyshire.

Chesterfield Coroner’s Court heard he died at the scene from chest injuries within minutes of the high-speed impact on August 14 last year.

The retired NHS IT manager got into difficulty at the end of a routine early evening flight above Mam Tor. After he hit the ground eyewitnesses ran to his aid and began performing CPR before emergency serves arrived on the scene.

A coroner said the tragedy seemed to rest on a ‘split second moment of decision making that had fatal consequences’.

The inquest was told Mr Ogden, who lived in Sheffield, South Yorks, had more than 300 hours of experience as a pilot and coached other flyers from the Derbyshire Soaring Club. 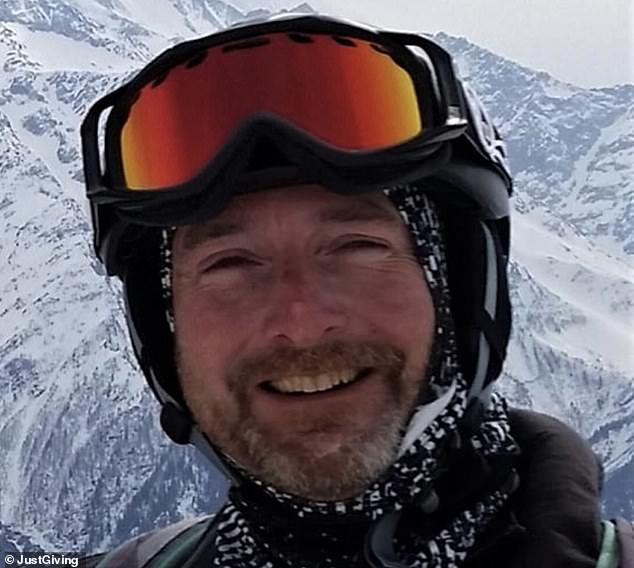 Paraglider Tim Ogden (pictured), 53, died after his chute collapsed as he came in to land at a Peak District beauty spot

Minutes before the tragedy he and two fellow pilots took off from Treak Cliff at the top of Mam Tor – known by locals as ‘Shivering Mountain’ – after completing pre-flight checks.

One of the men, Guy Richardson, told investigators that, after a normal takeoff at the spot which is a favourite with paragliders, the winds started to increase to around 30mph as he climbed to 2000 feet.

In a statement read to the court he described conditions as ‘right at the top end of an enjoyable flight.’

As the wind speeds rose he decided to land in the field at Windy Knoll but the turbulent air caused his chute to partially collapse.

After managing to make adjustments he regained control and landed safely.

He then radioed the two men still in the sky to warn them against landing in the field.

Andrew Tillsley acknowledged the message and he came down elsewhere but there was no reply from Mr Ogden. It was later found he was not carrying his radio on the fateful flight.

As Mr Ogden hit speeds of 40mph at 350 feet he turned into the wind preparing to land. Suddenly both sides of his parachute started to collapse and wrapped around him as he was thrown into an uncontrollable spin. 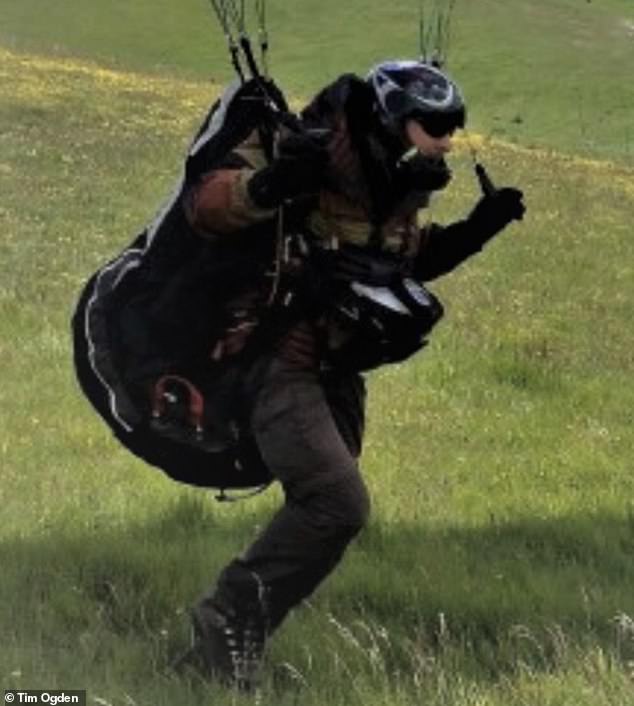 For a few moments Mr Ogden battled to regain control before deploying his reserve parachute, but by this point he was too close to the ground and it did not have time to properly inflate.

‘He deployed it, but by then he had reached terminal velocity and it was too late. He landed about 20 feet from me,’ added Mr Richardson.

The paraglider landed on his back and suffered severe chest and spine injuries. Despite the efforts of passers-by and paramedics he was pronounced dead at 7.30pm.

Mr Ogden was described as a keen sportsman who loved skiing and scuba diving and had taken up paragliding about seven years before his death. After his early retirement he often traveled to the Alps to pursue his hobby.

After hearing the evidence, Derbyshire assistant coroner Matthew Kewley described Mr Ogden as ‘an all-round good guy’ who was popular with those who knew him.

He said the determining factor in the tragedy appeared to be his decision to land at Windy Knoll.

But he added: ‘I want to emphasise that Tim was an experienced, competent and safe pilot who died doing something that he very much loved.’

Recording a conclusion of accidental death Mr Kewley said the flyer knew the area well and ‘was using equipment that was suitable for the flight and was in an air-worthy state’.

The collapse of his chute was ’caused by the turbulent air’ around Windy Knoll.

‘All of the evidence points towards this being a tragic accident,’ he added.

Paying tribute to her brother, Kath Evans described him as the ‘rock of the family’ with a ‘mischievous sense of humour.’

He had acted as their father’s full-time carer before he passed away in July last year after a long battle with dementia.

‘Tim died doing something he loved,’ she said. ‘Since his death we’ve had so many lovely comments from his friends from all walks of life, and are proud of him as a son, brother and uncle.’

Paying tribute on a JustGiving page, Mr Richardson said: ‘A man of the mountains, Cheese, wine and Sausage Lover, a Dancer, a Skier and a Paraglideing Pilot. Tim lived in Sheffield, a doting Uncle, Brother, Son and most of all, our friend. He had a zest for life and a smile many couldnt fathom hiden behind his facial hair.’ [sic]

Tim Davie says 'everyone in my generation is walking a tightrope'