A PARIS knife rampage that saw two people stabbed near the old Charlie Hebdo office is being investigated as a terror attack.

French prosecutors confirmed they believed the bloodbath was terror related as two suspects were reportedly arrested after going on the run. 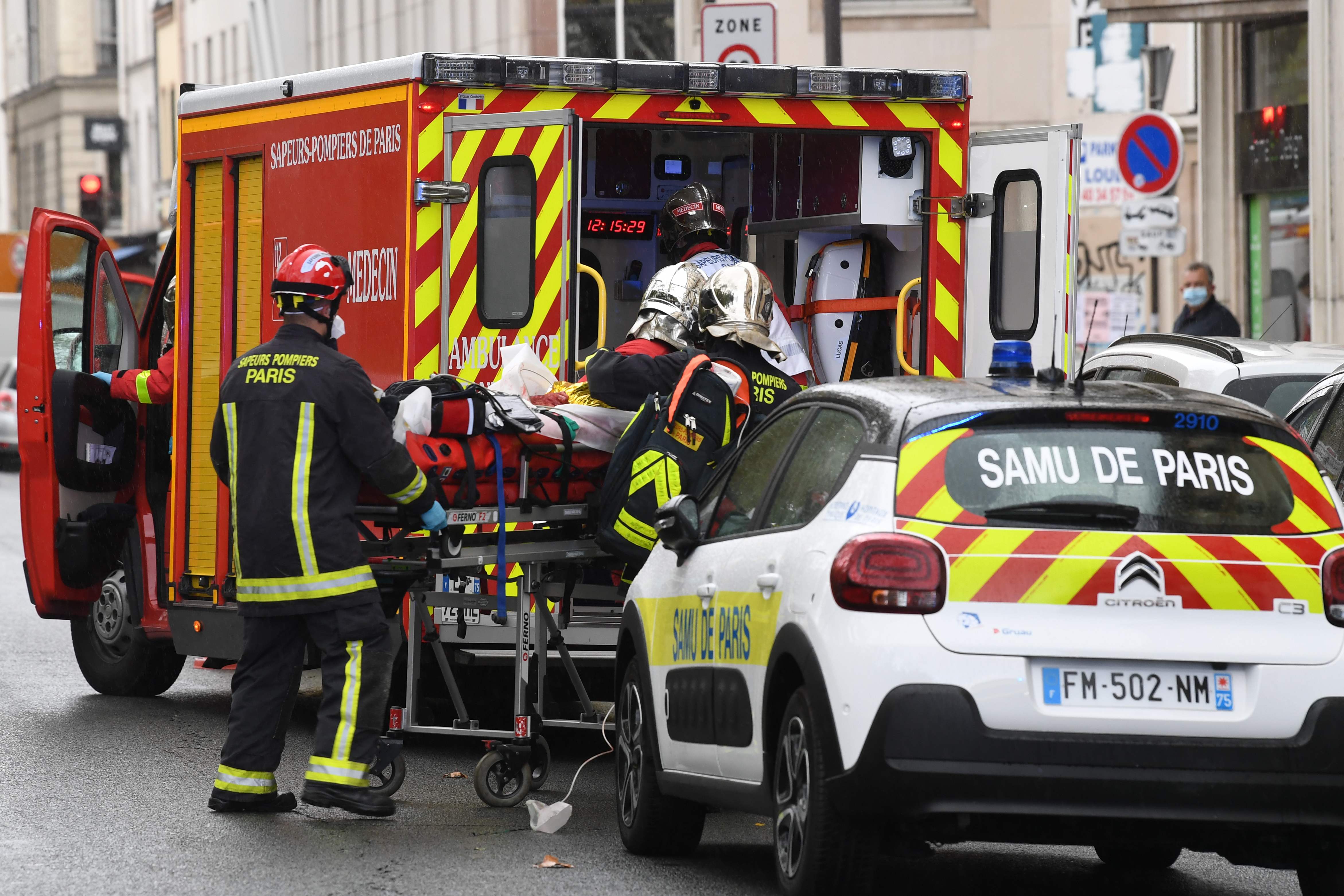 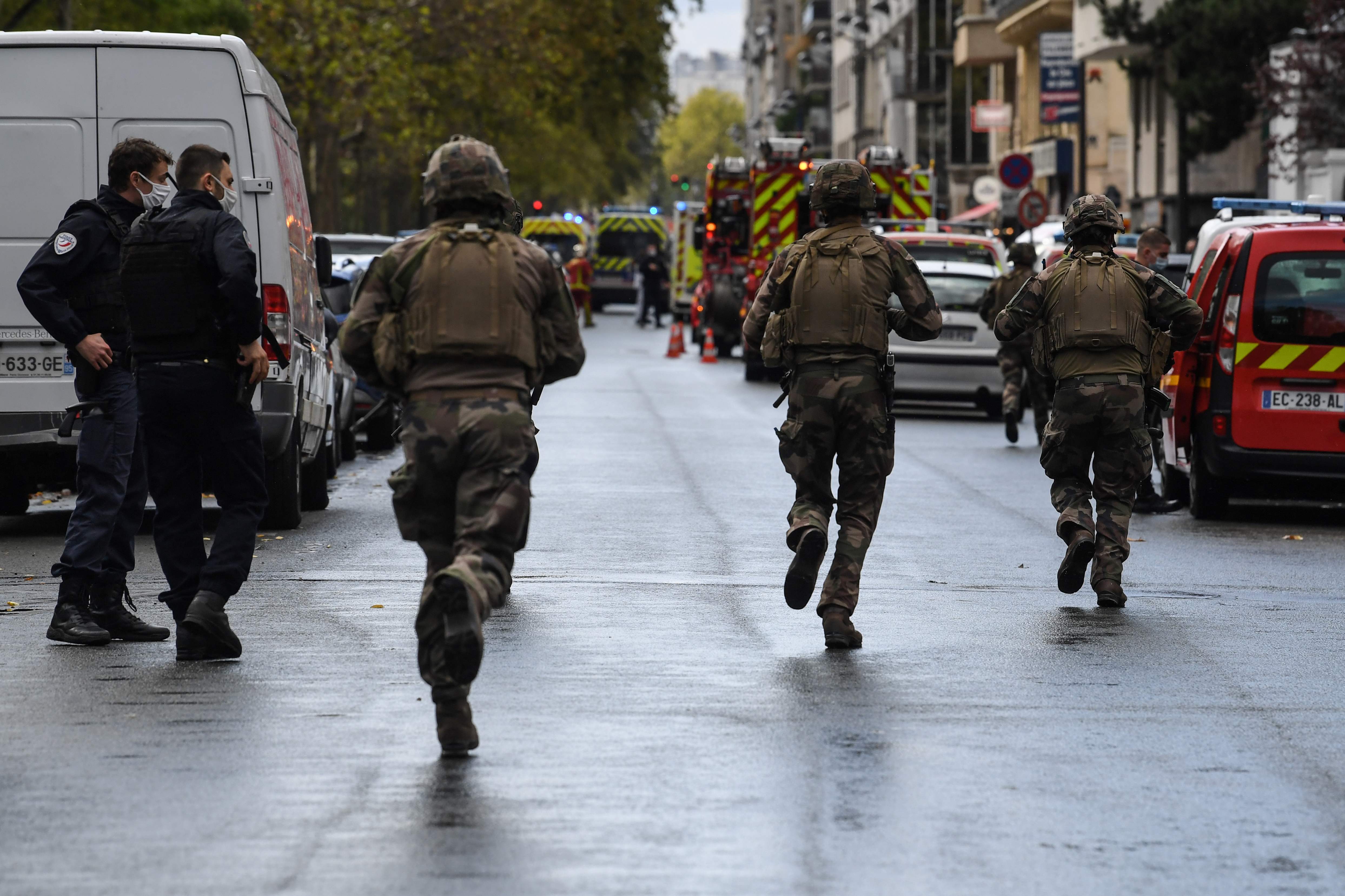 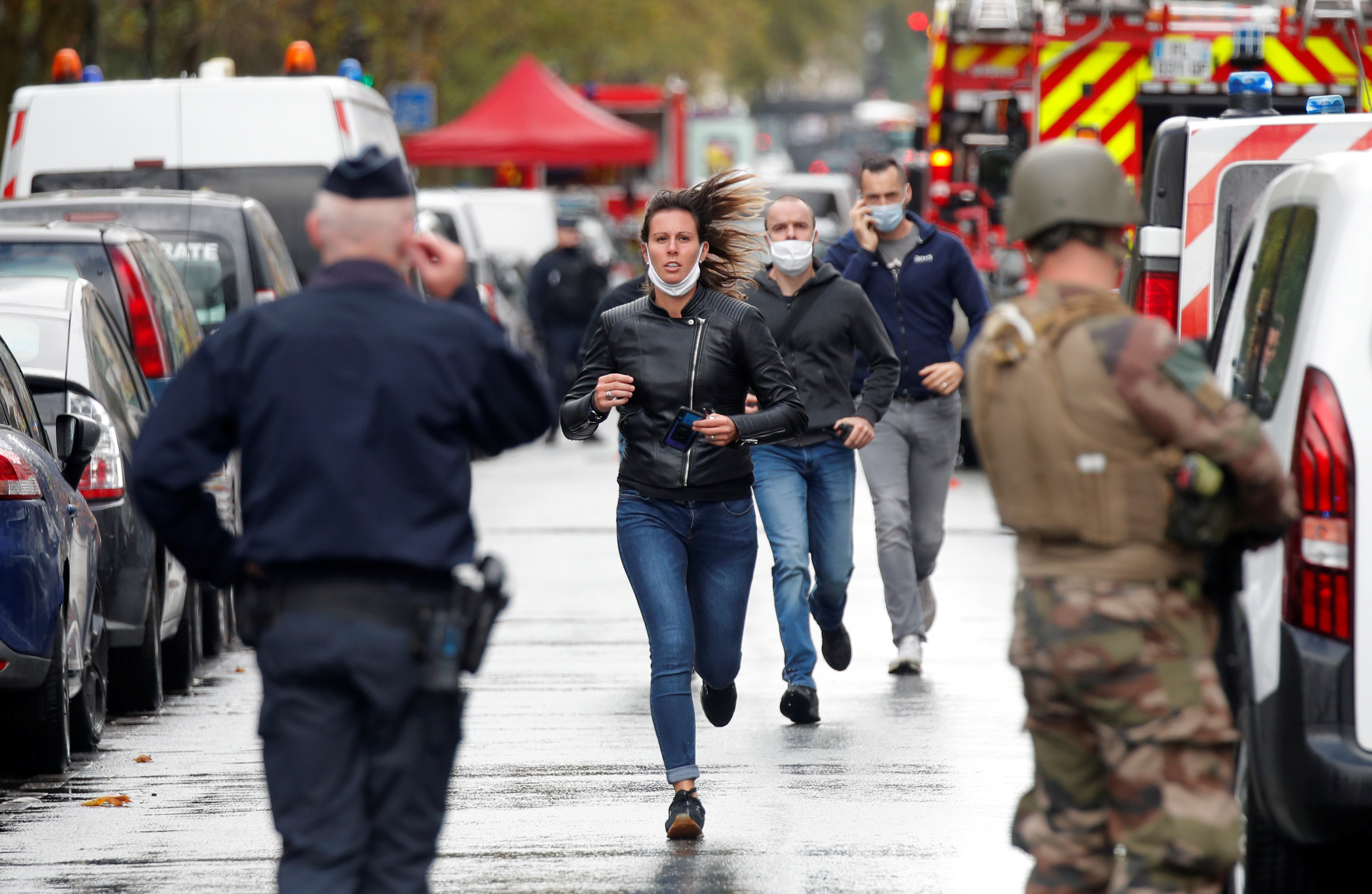 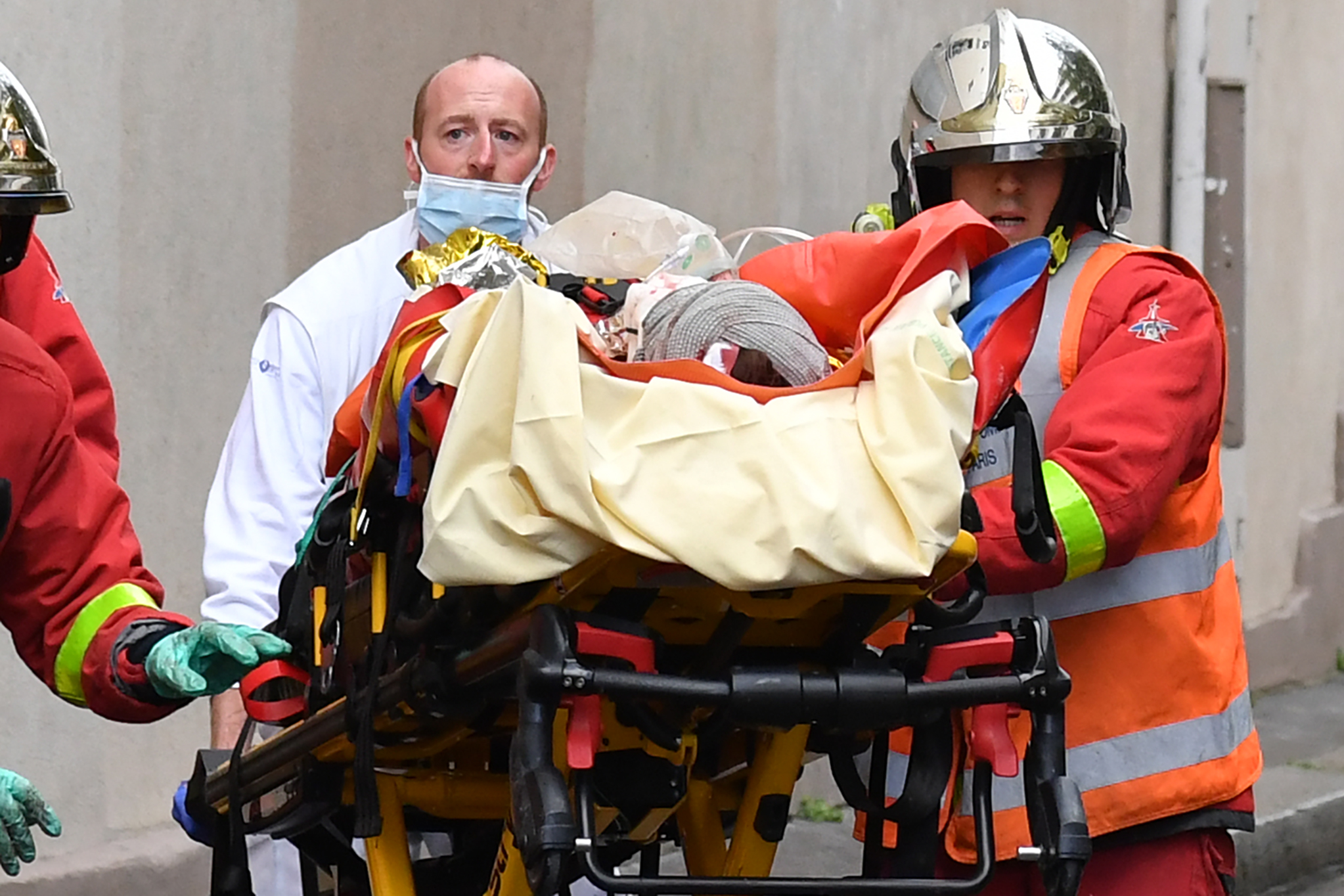 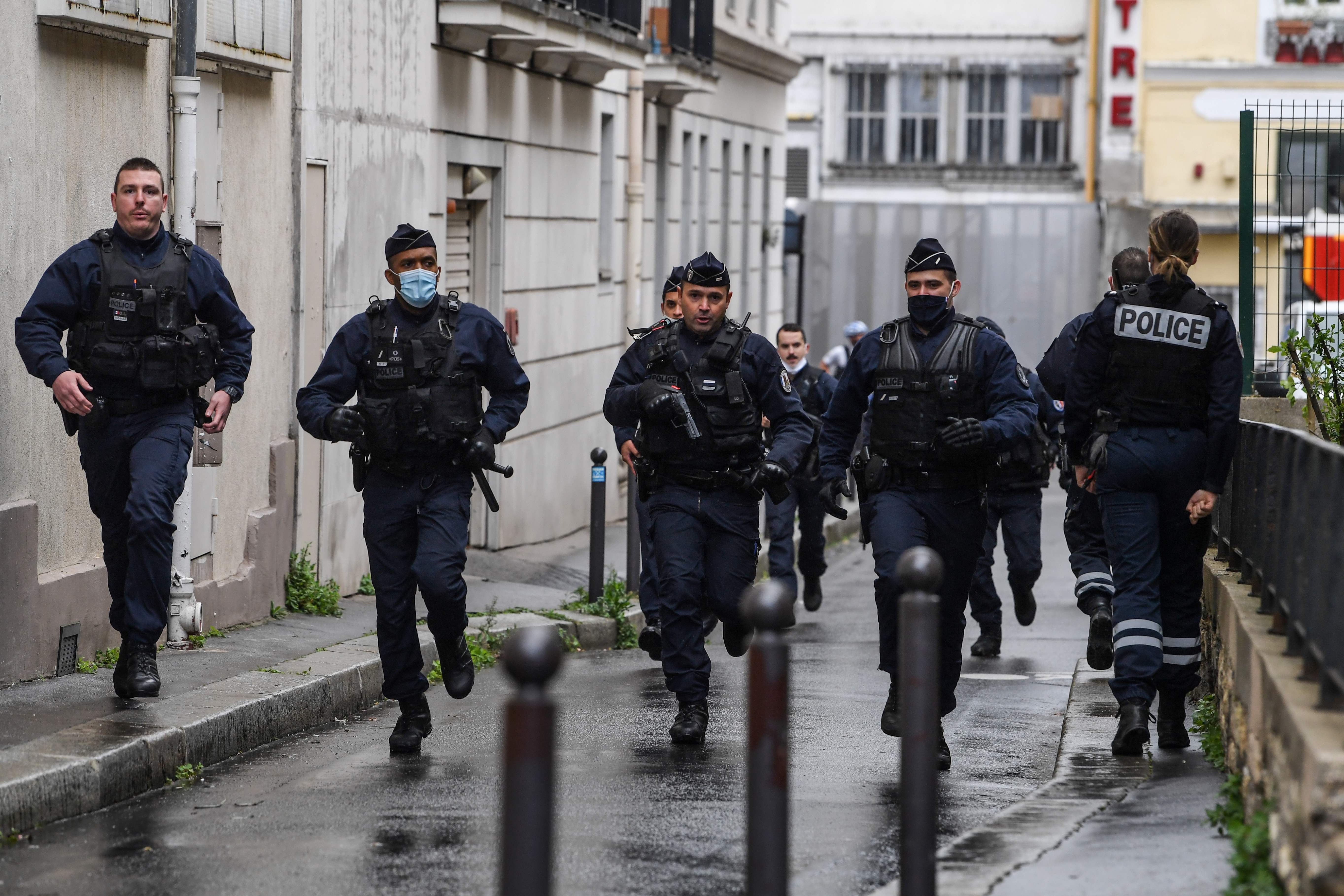 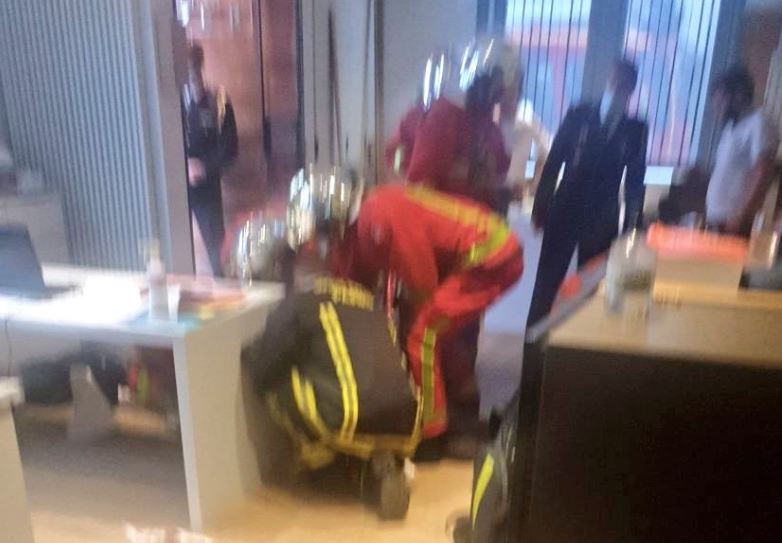 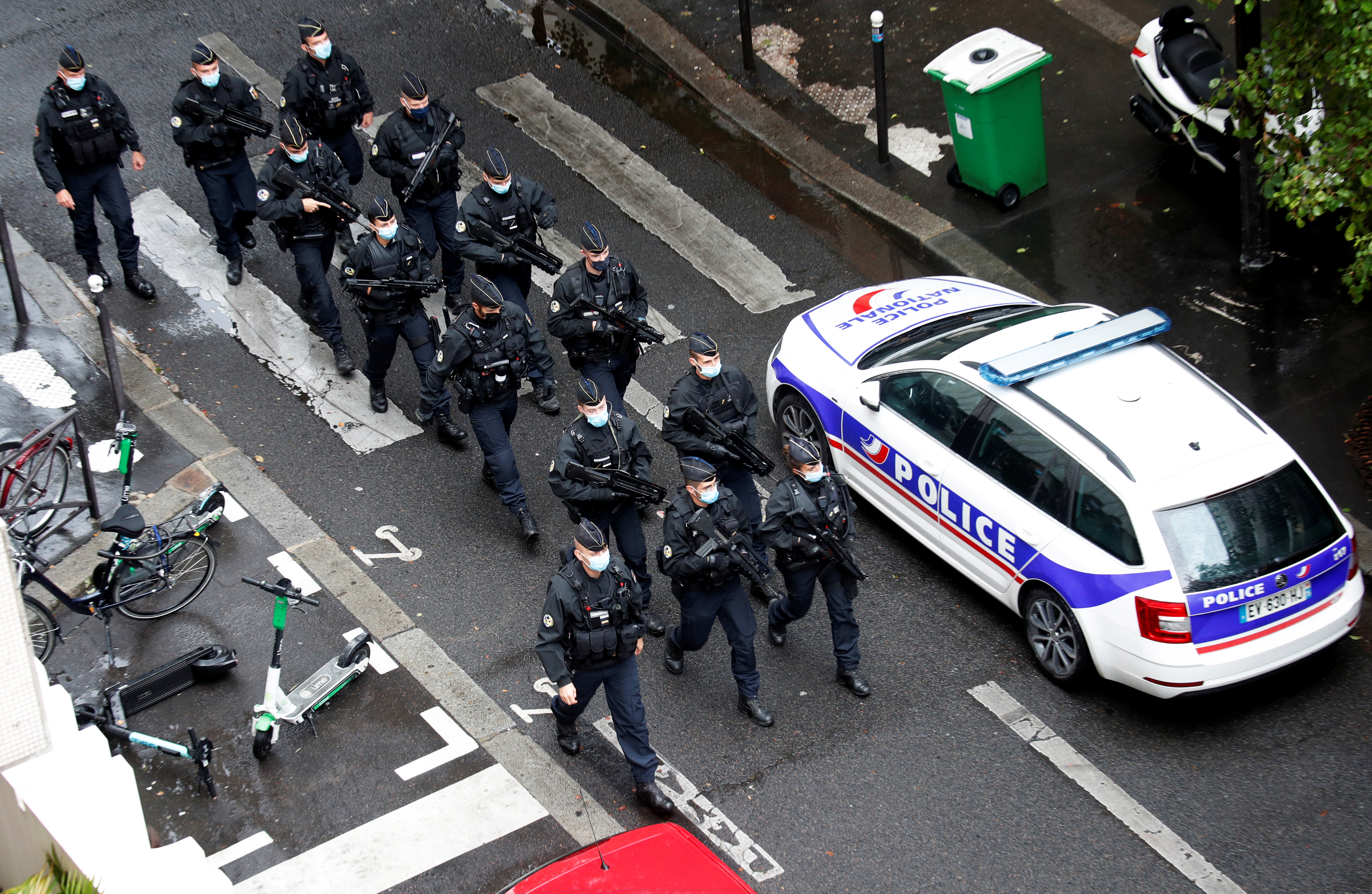 At least two people were stabbed in the knife attack in the Richard Lenoir area of the French capital at around 11.40am local time.

It came as a criminal trial linked to the 2015 massacre at the satirical magazine's former HQ which saw 12 people killed by terrorists is ongoing elsewhere in Paris.

Today's victims were left in a serious condition as pictures showed a huge emergency services and military presence on the scene.

Local media reports the two victims worked for a news agency and were outside smoking when they were attacked.

It is believed two suspects fled the scene after the attack as cops launched a manhunt amid fears they would strike again.

Police tracked down to the steps of the Paris Bastille opera house – around 800m from the scene.

Witnesses reportedly stopped him dripping with blood and he was detained "within minutes".

A second suspect was arrested some two hours later on a metro train.

Both men were taken to a high-security police station in central Paris, where they were on Friday afternoon being questioned.

Neither of the men have been identified, but one is said to be 18 years old.

Paris authorities have placed all schools, nurseries and care homes in the area on lockdown.

The former Charlie Hebdo offices were also been cordoned off after police found a suspicious package, but cops confirmed it was not a bomb. 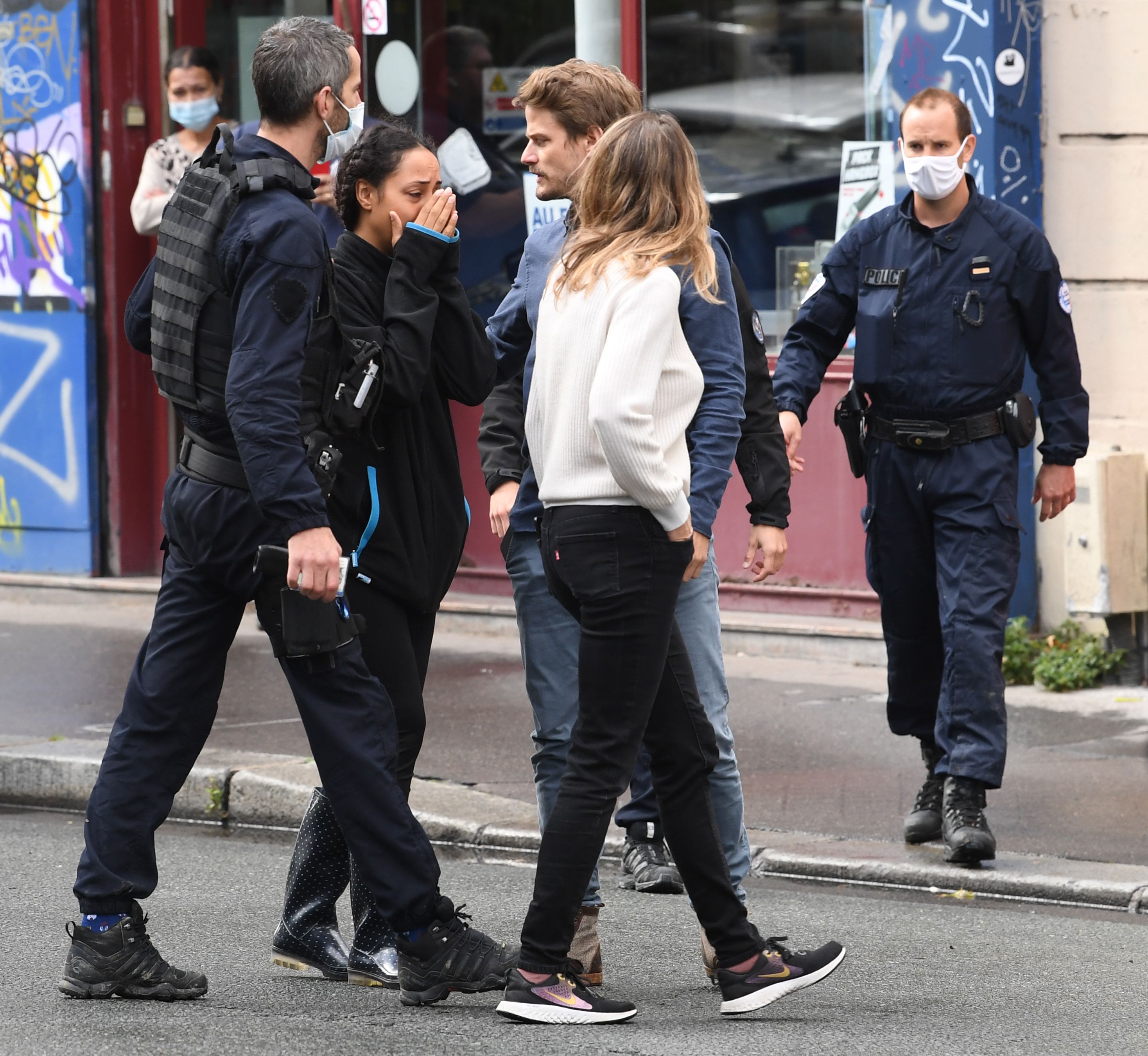 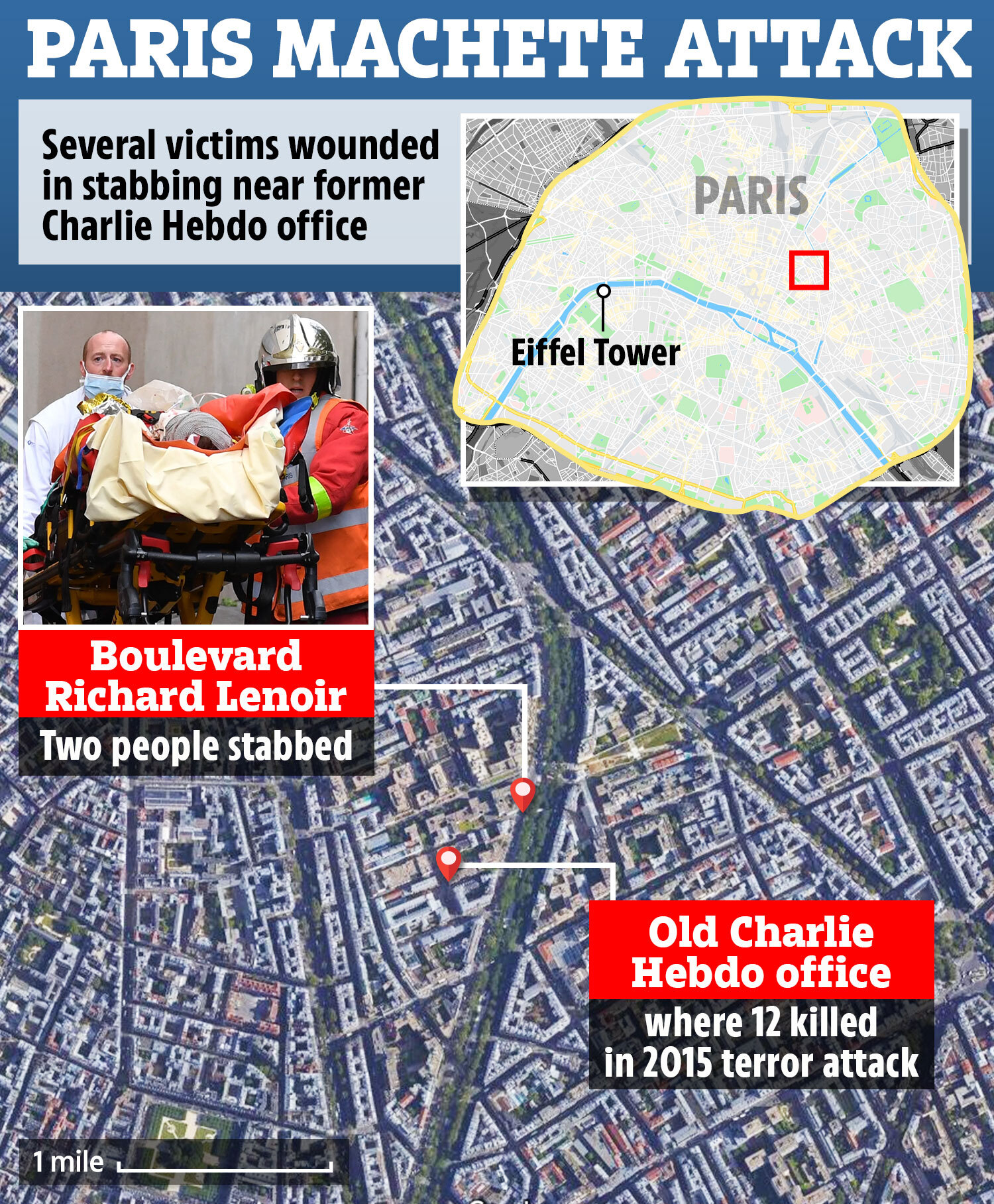 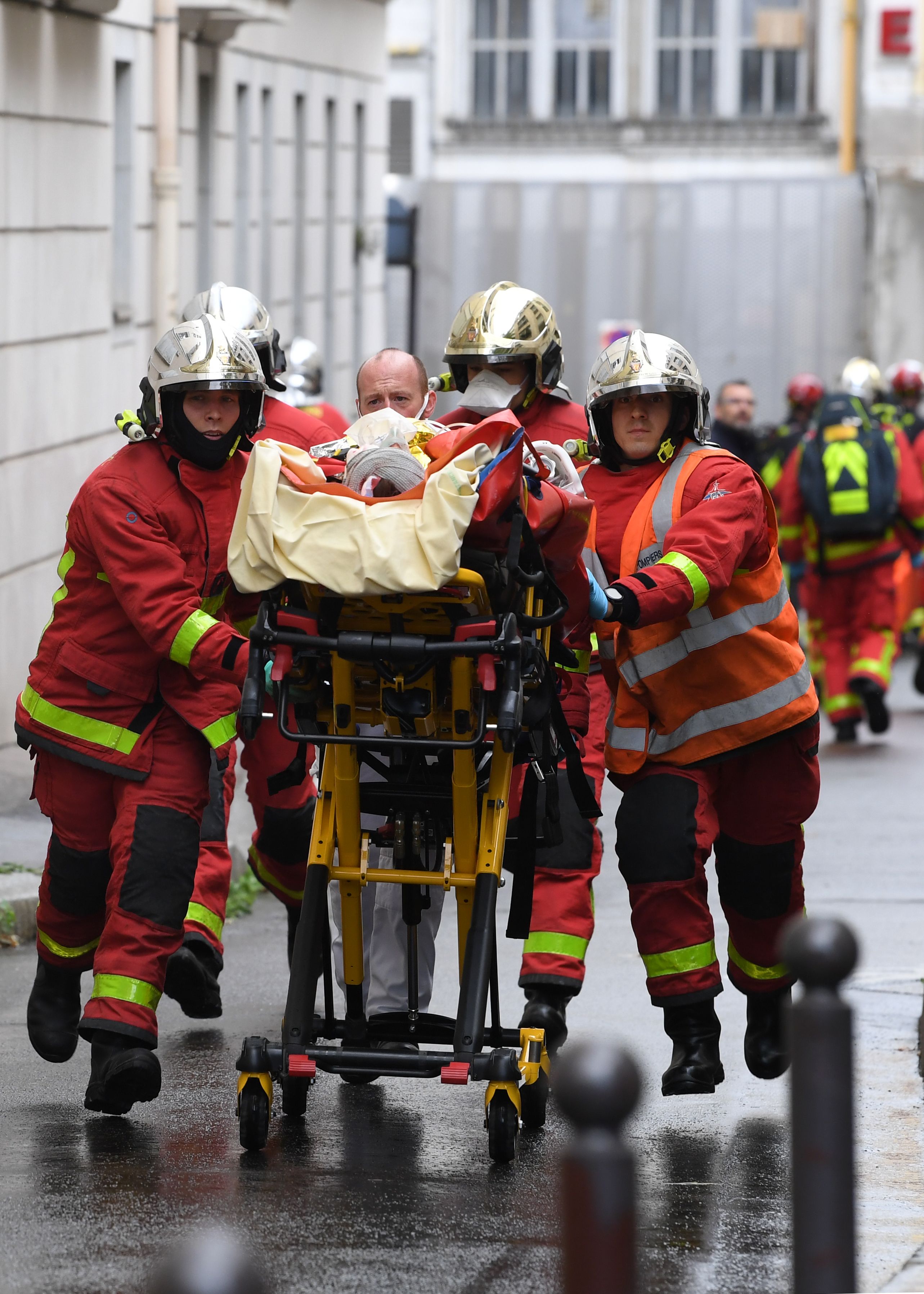 The two victims, a man and a woman, work for Première Lignes – a press agency based in the old Charlie Hebdo office.

They were smoking in the street outside the building when were set upon by the attackers.

The woman fled to a nearby office where employees came to her aid, but witnesses said she was bleeding heavily.

Both victims are said to be in intensive care in a serious but no life threatening condition.

Paul Moreira, a journalist and filmmaker at Premières Lignes, told BFM TV the assailant attacked them with a "meat cleaver" – describing the incident as "chilling".

Employees at Premières Lignes were some of the first witnesses to the January 2015 attack.

Another worker said: "Two colleagues were smoking a cigarette at the bottom of the building.

"I heard screams and went to the window and saw one of my colleagues stained with blood, being followed by a man with a machete on the street." 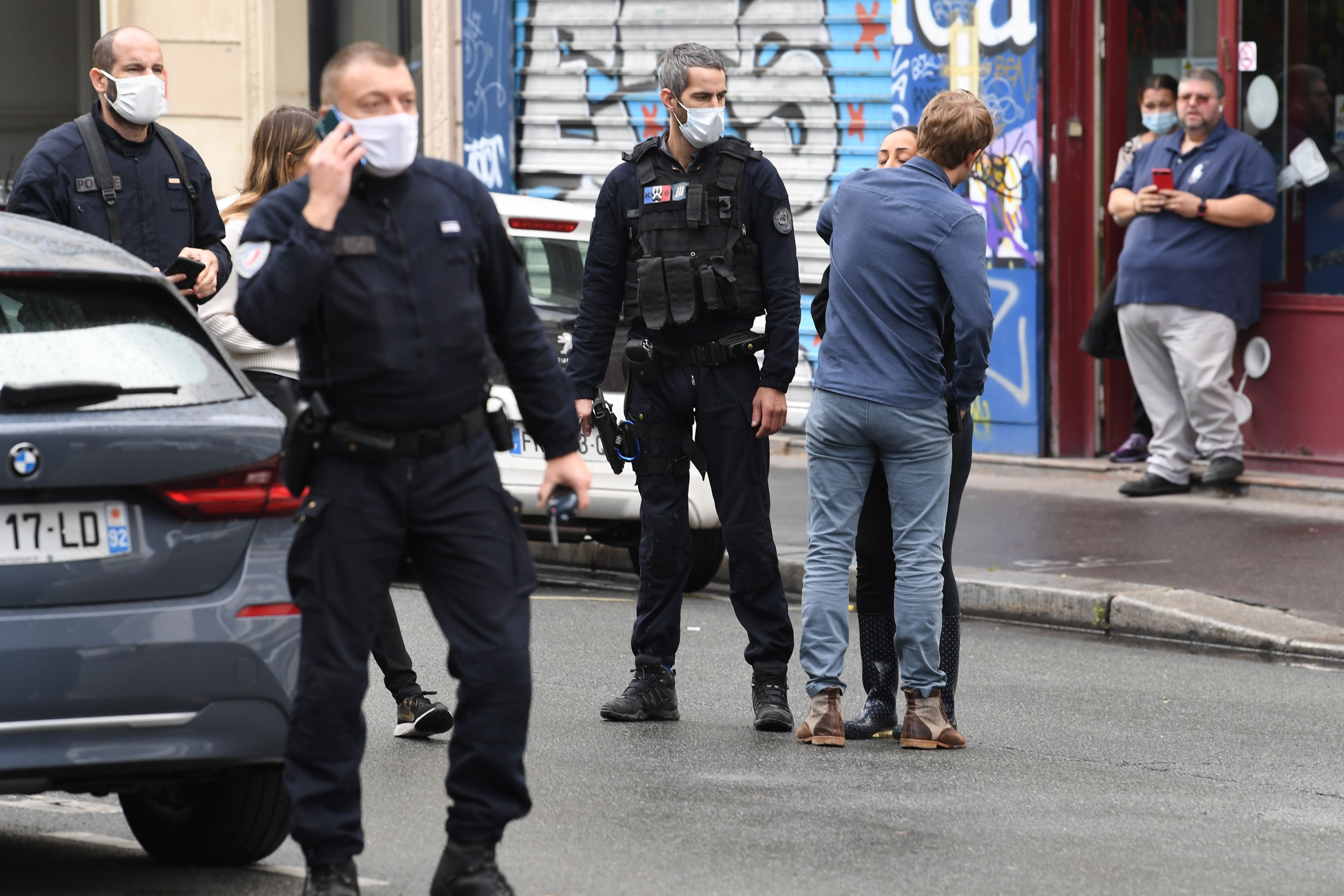 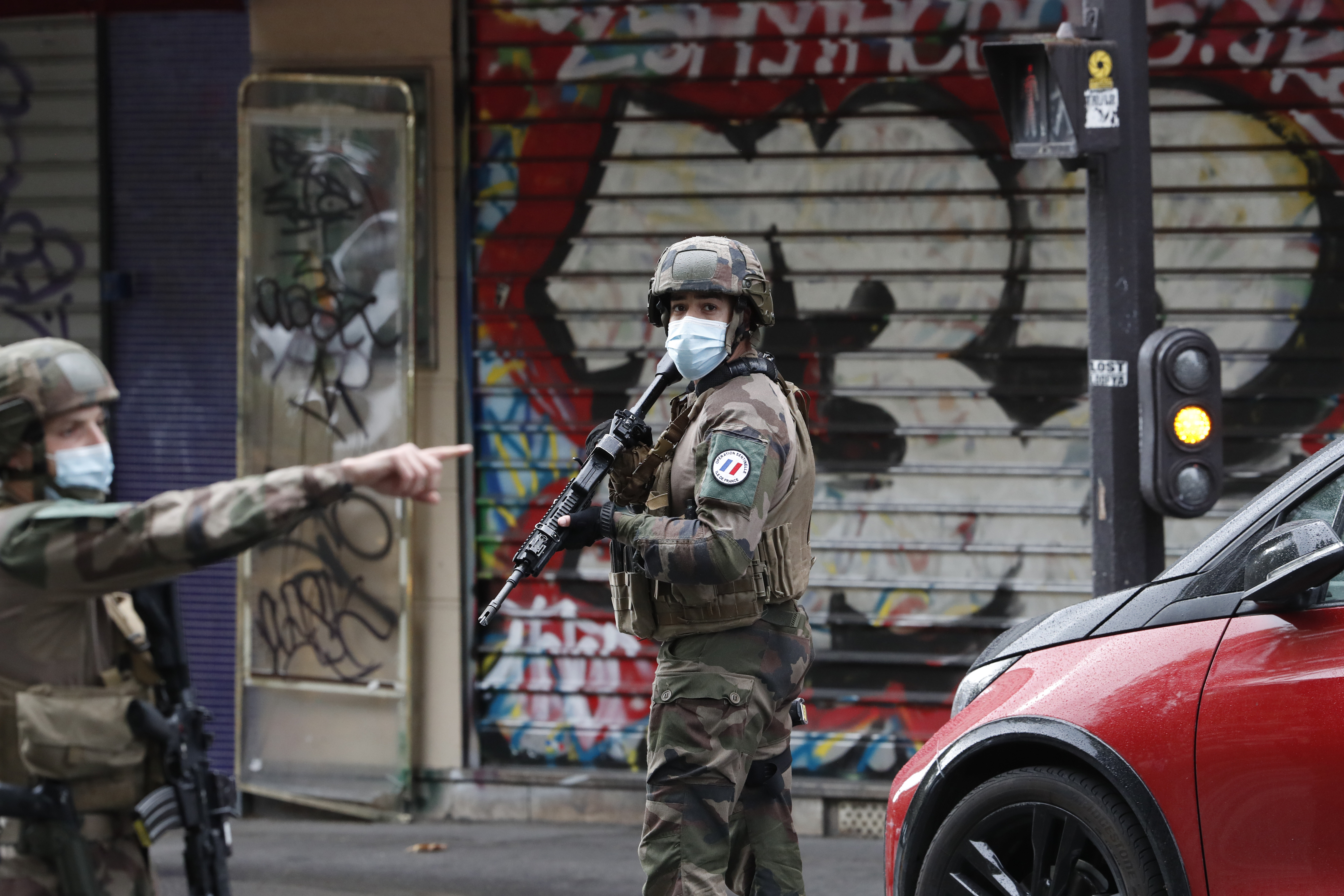 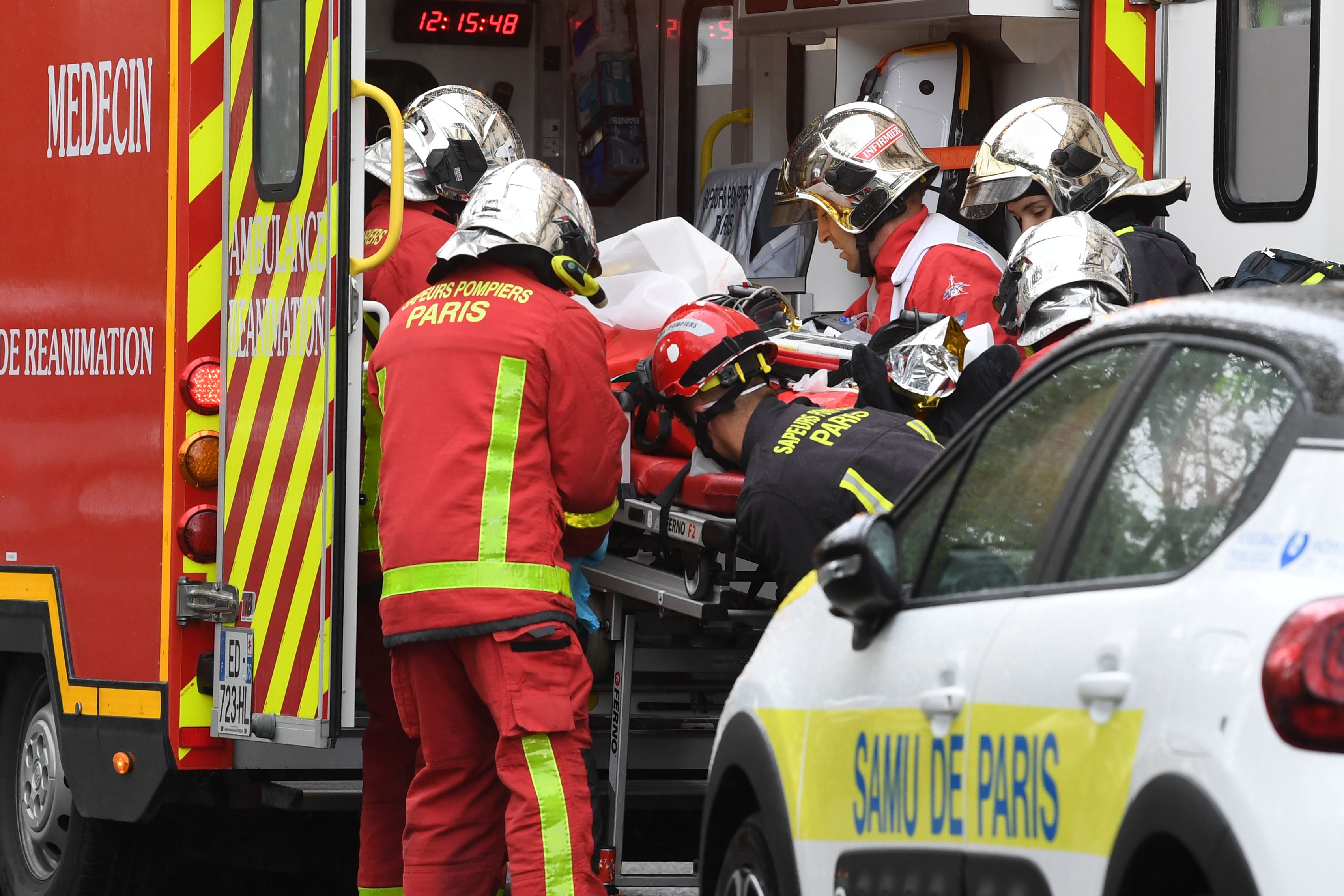 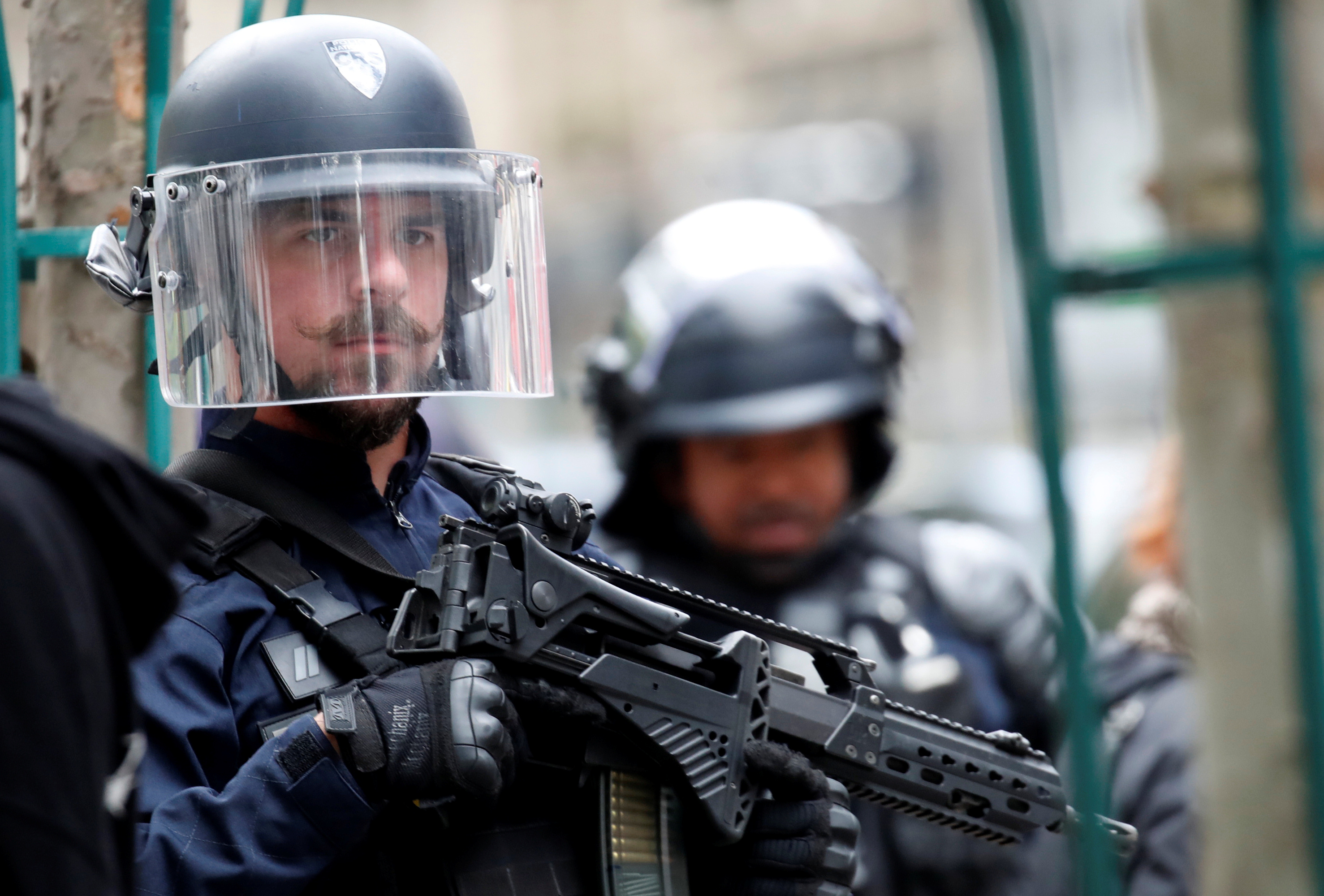 A blade was found at the scene, two police sources said, as one described it as a machete, the other called it a meat cleaver.

Another writer Hassani Erwan, 23, told AFP: "At around midday, we went to have lunch at a restaurant but as we were arriving, the owner started to cry 'leave, leave, there's an attack'.

"We immediately ran away and locked ourselves ourselves inside a shop with four other customers."

One witness added: "I saw a young woman with a huge head wound, blood was running all over her face."

A neighbour said: "It's starting again, the same fear there was five years ago, the same images in the street, it's heart-breaking."

One suspect was said to be wearing a black sleeveless puffer jacket, black jogging bottoms and red shoes. 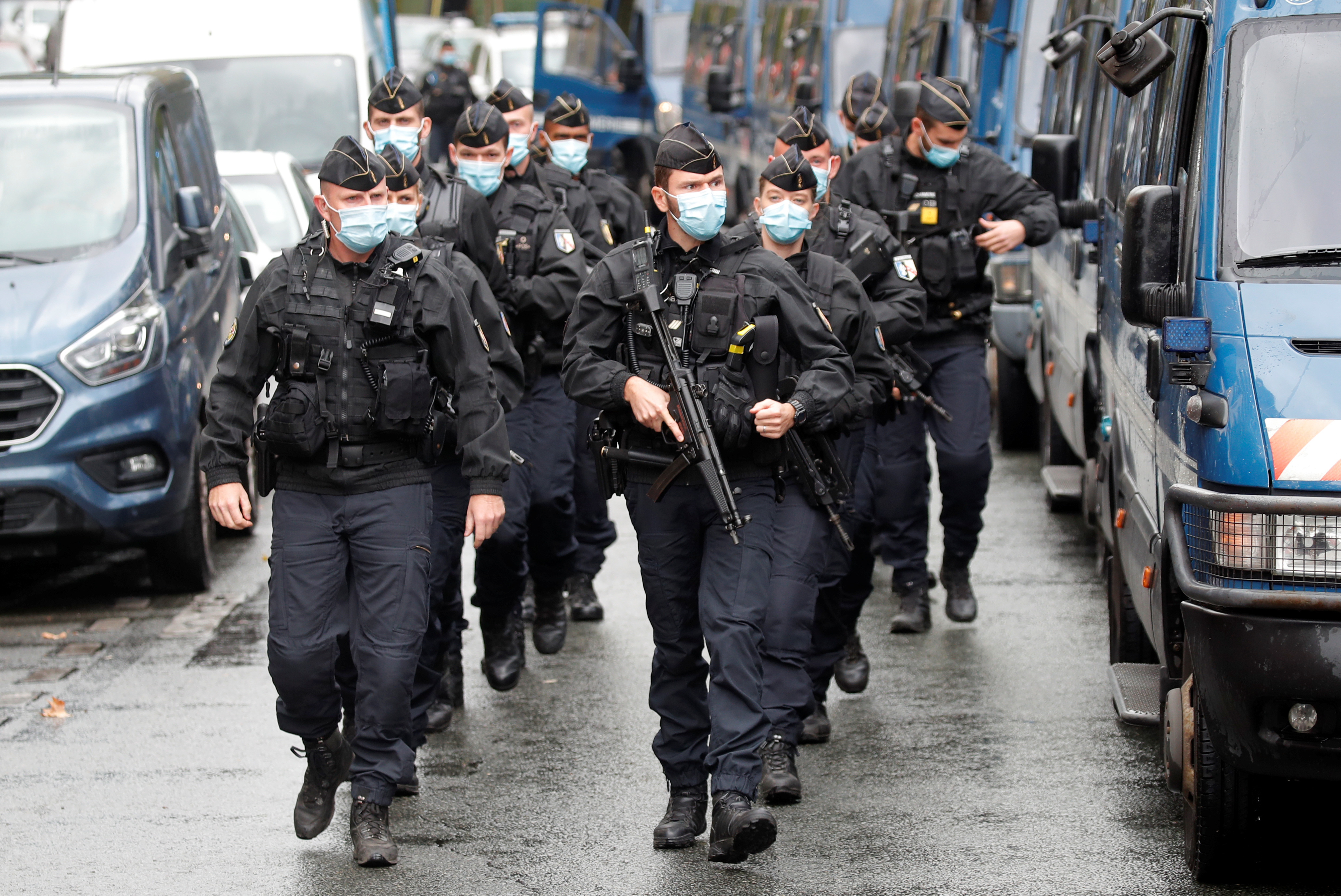 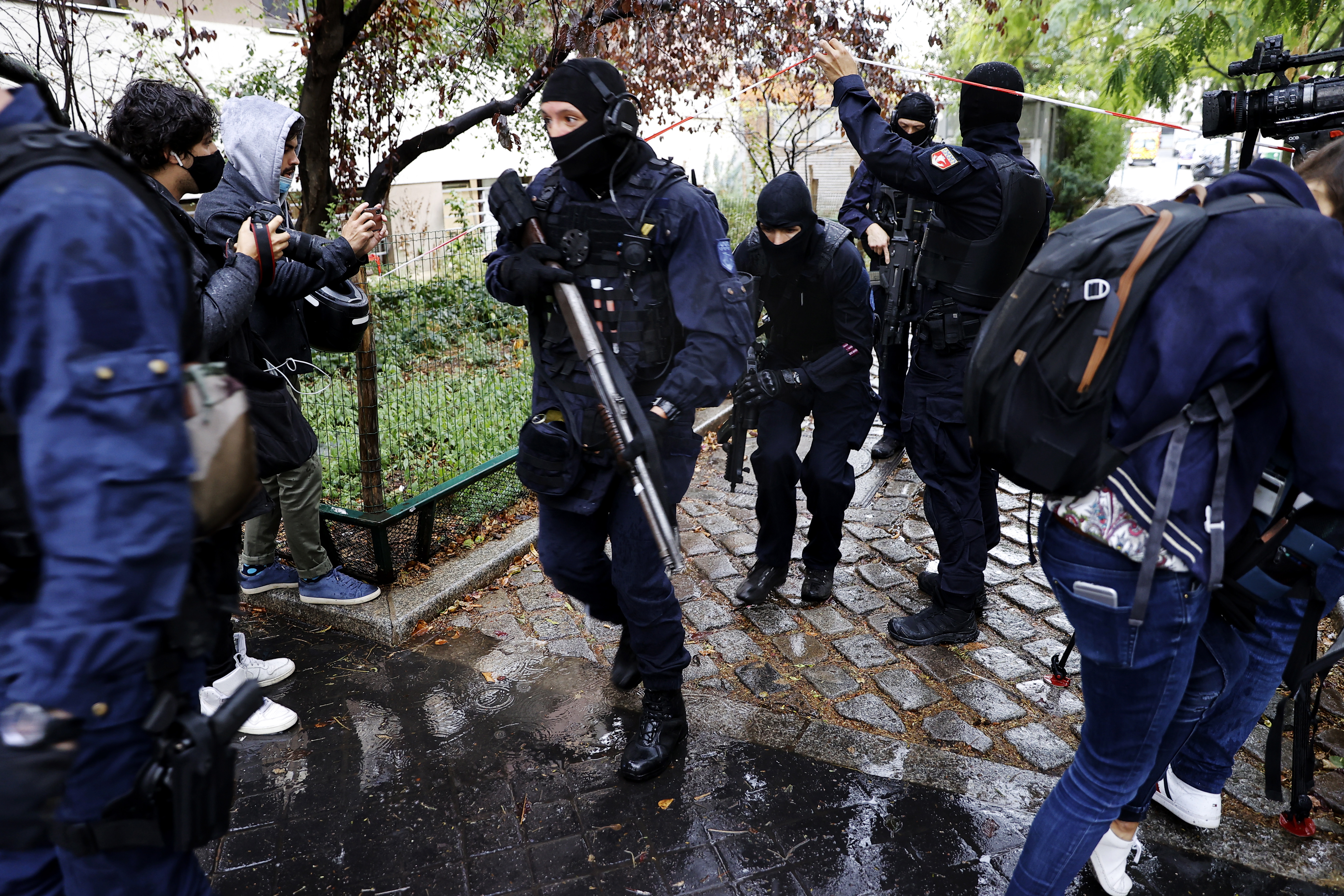 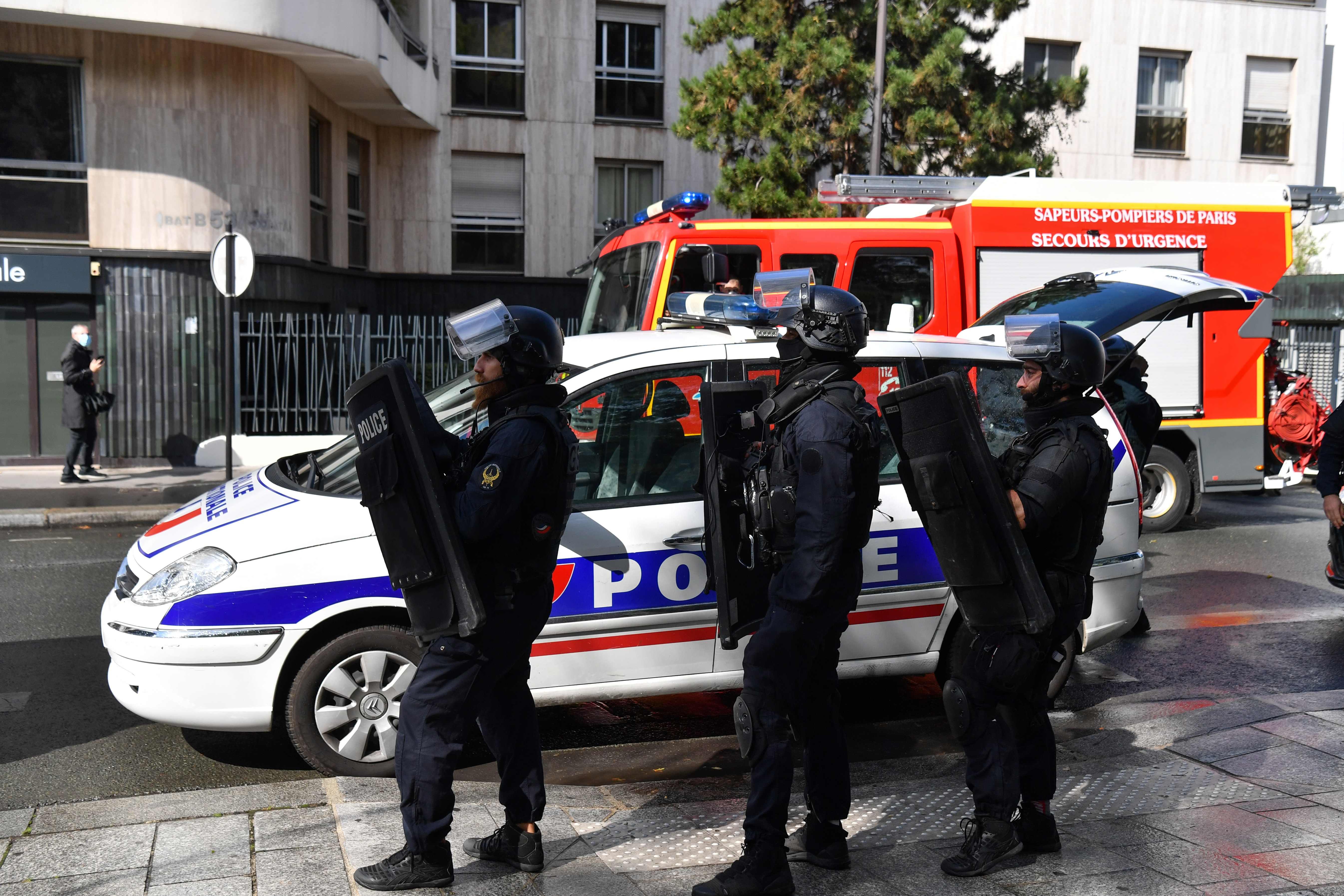 Prime Minister Jean Castex described the incident as a "stabbing attack" and said a crisis unit has been opened at the Ministry of the Interior.

Castex cut short a visit to a suburb north of Paris to head to the Interior Ministry to follow developments.

The PM attended the scene, which he described as "a very serious attack".

Pictures from the scene show firefighters helping to treat victims and huge numbers of armed police.

Soldiers are also seen rushing to the scene armed with assault rifles.

Other images show firemen appearing to be treating a victim inside a nearby building. 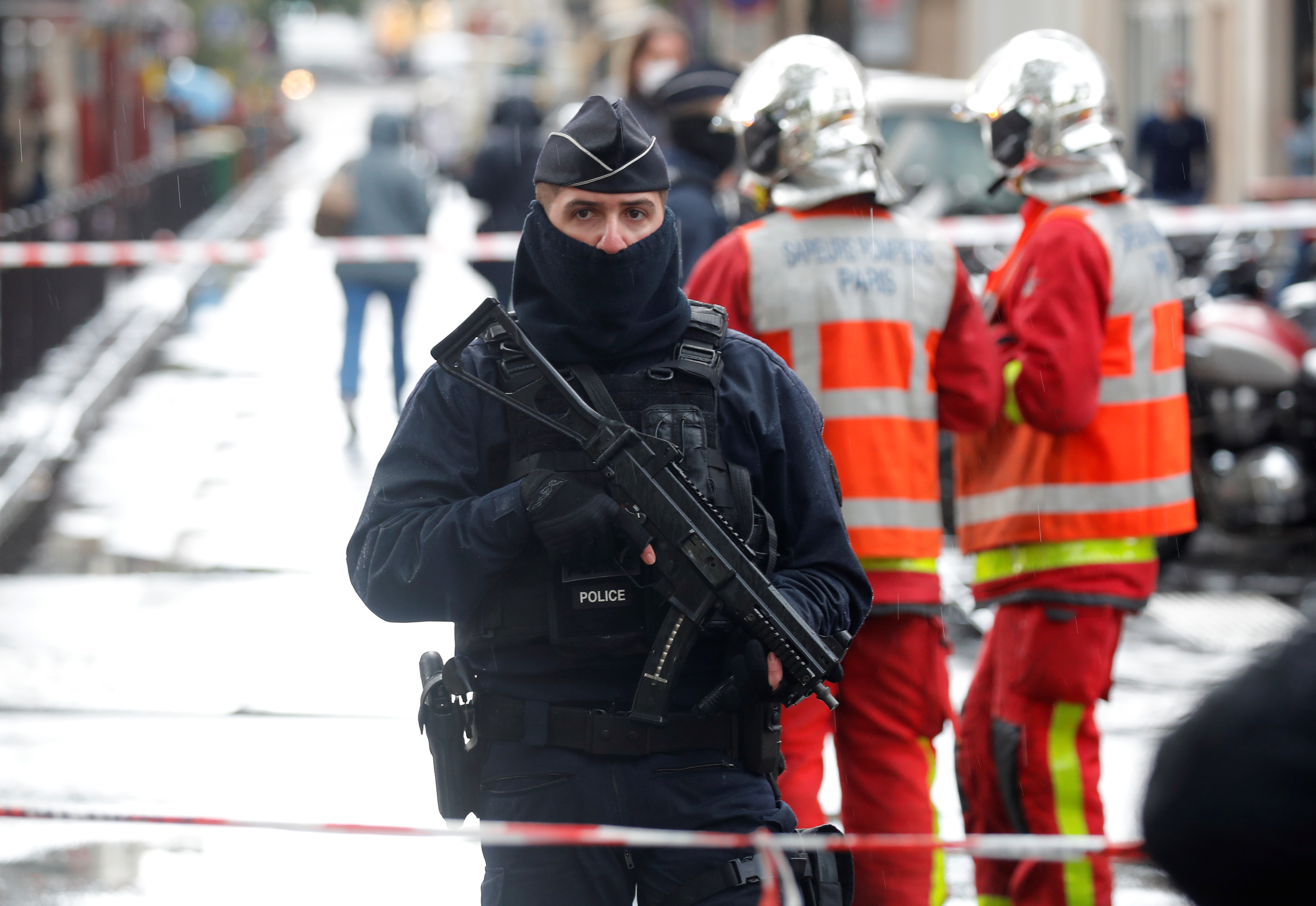 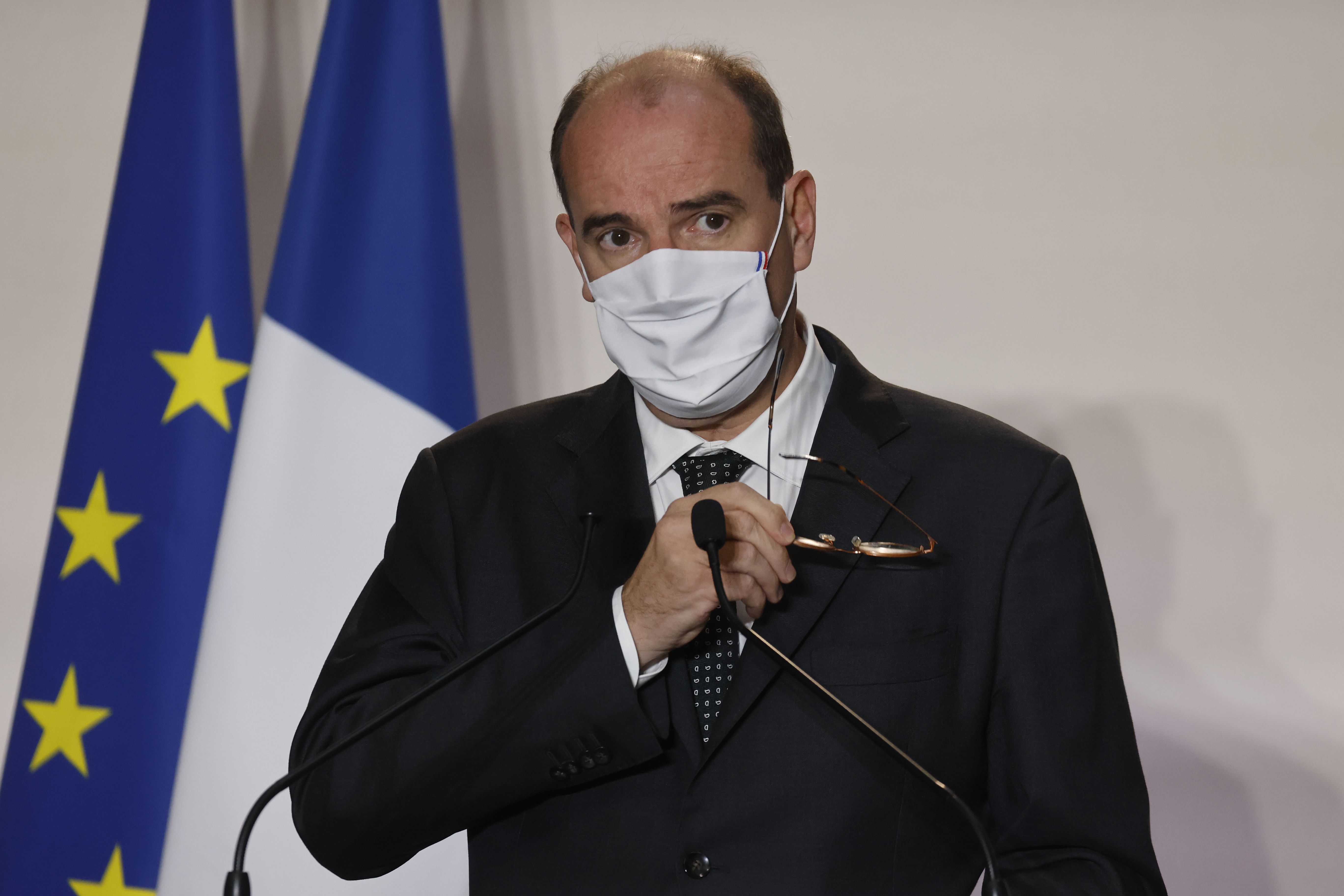 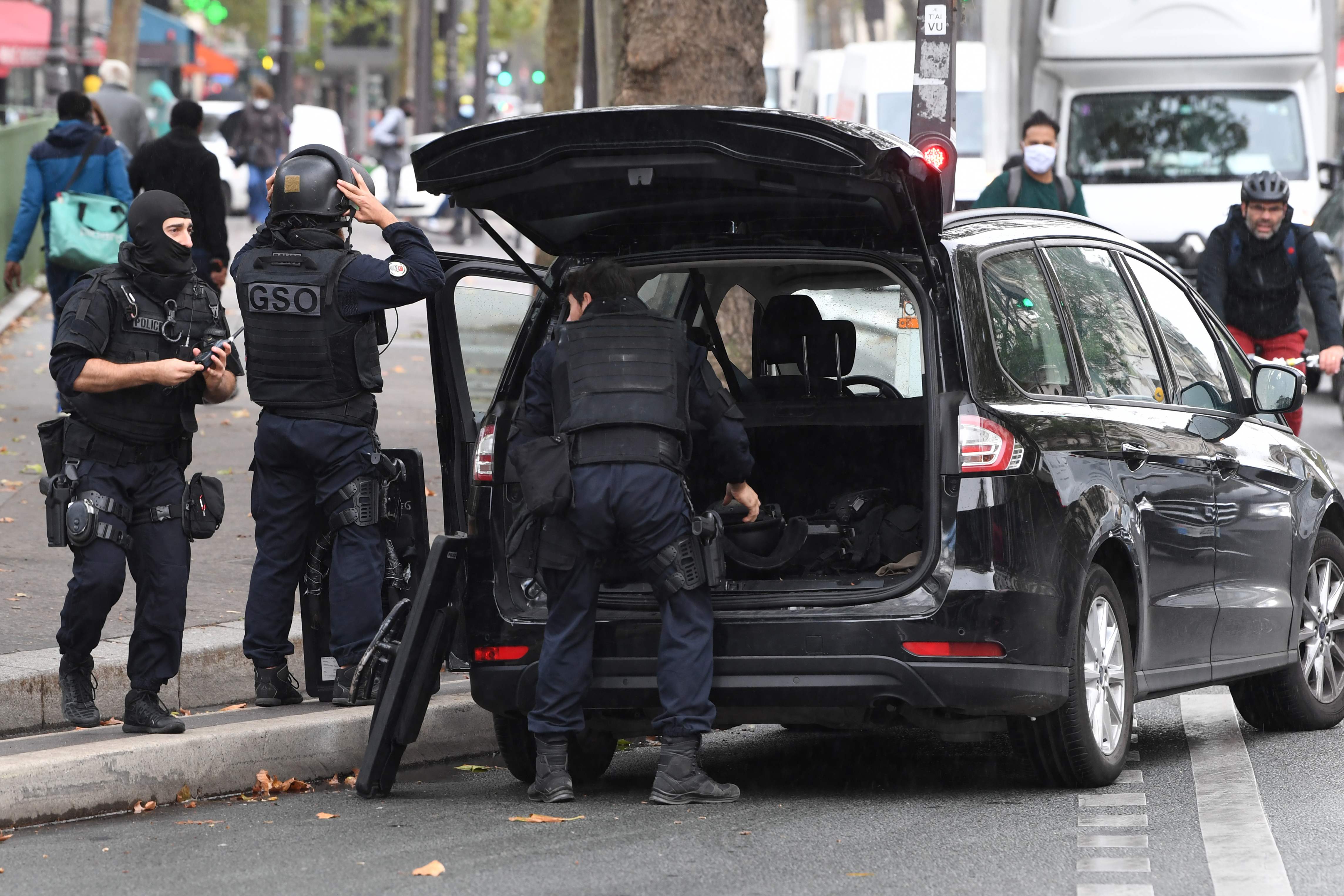 Valérie Pécresse, president of the Ile-de-France region of Paris, said: "Extremely shocked by the murderous attack near the former offices of Charlie Hebdo, in a Paris arrondissement which has already paid a heavy price for violent terrorism.

"I give all my support to the authorities which are now tracking the perpetrator."

It comes as a trial takes place in Paris concerned with the January 2015 attacks on Charlie Hebdo that shocked the world.

Charlie Hebdo now publishes from a secret address in Paris, and many staff members have bodyguards.

It marked the opening of the criminal trial by re-publishing the infamous cartoons mocking the Prophet Mohammed.

Critics said the publication had deliberately used blasphemy to stir up hatred against Muslims around the world.

The deeply incendiary images originally led to riots across the Muslim world when they were first published in the Danish daily Jyllands-Posten on September 30, 2005. 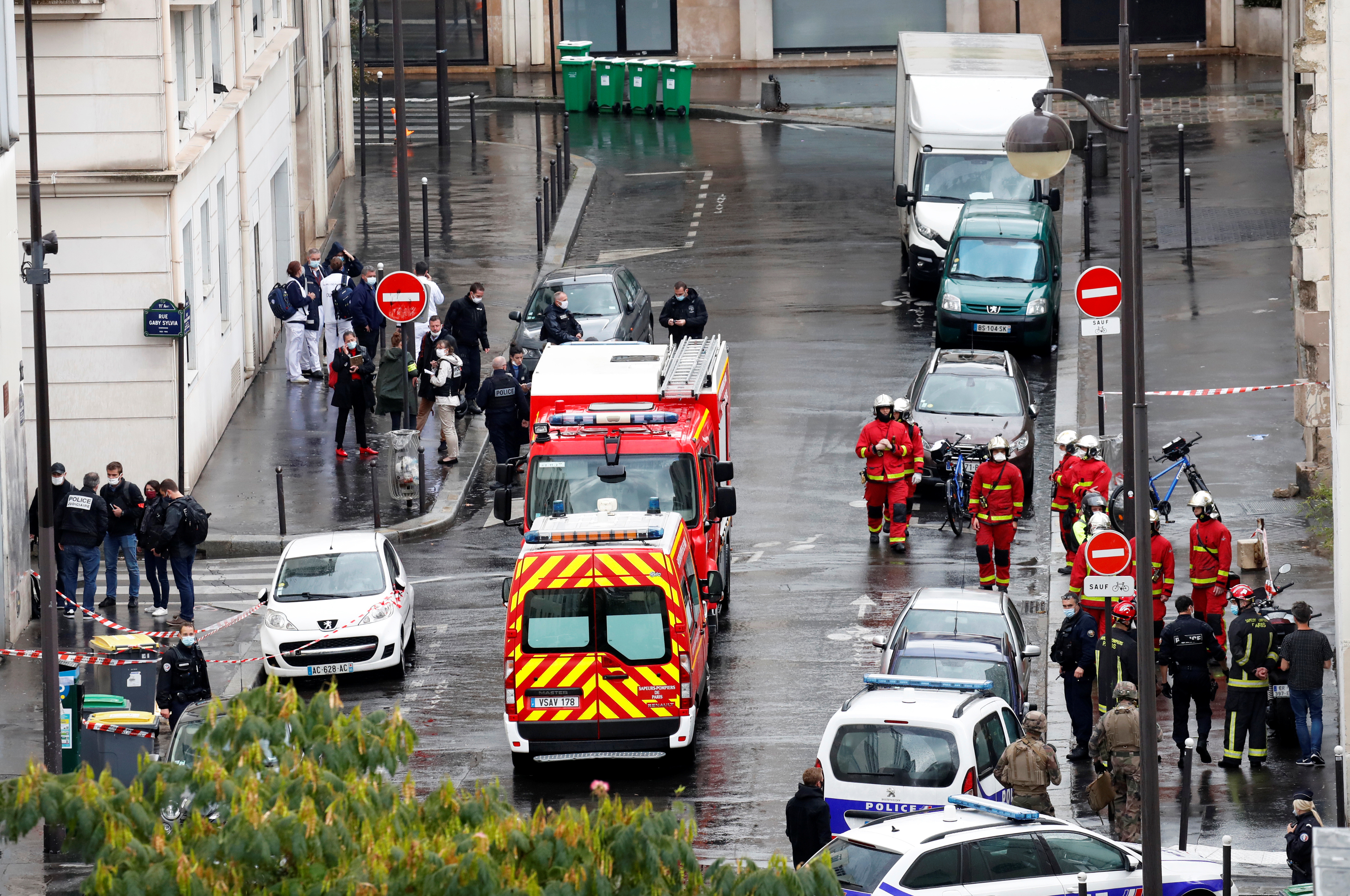 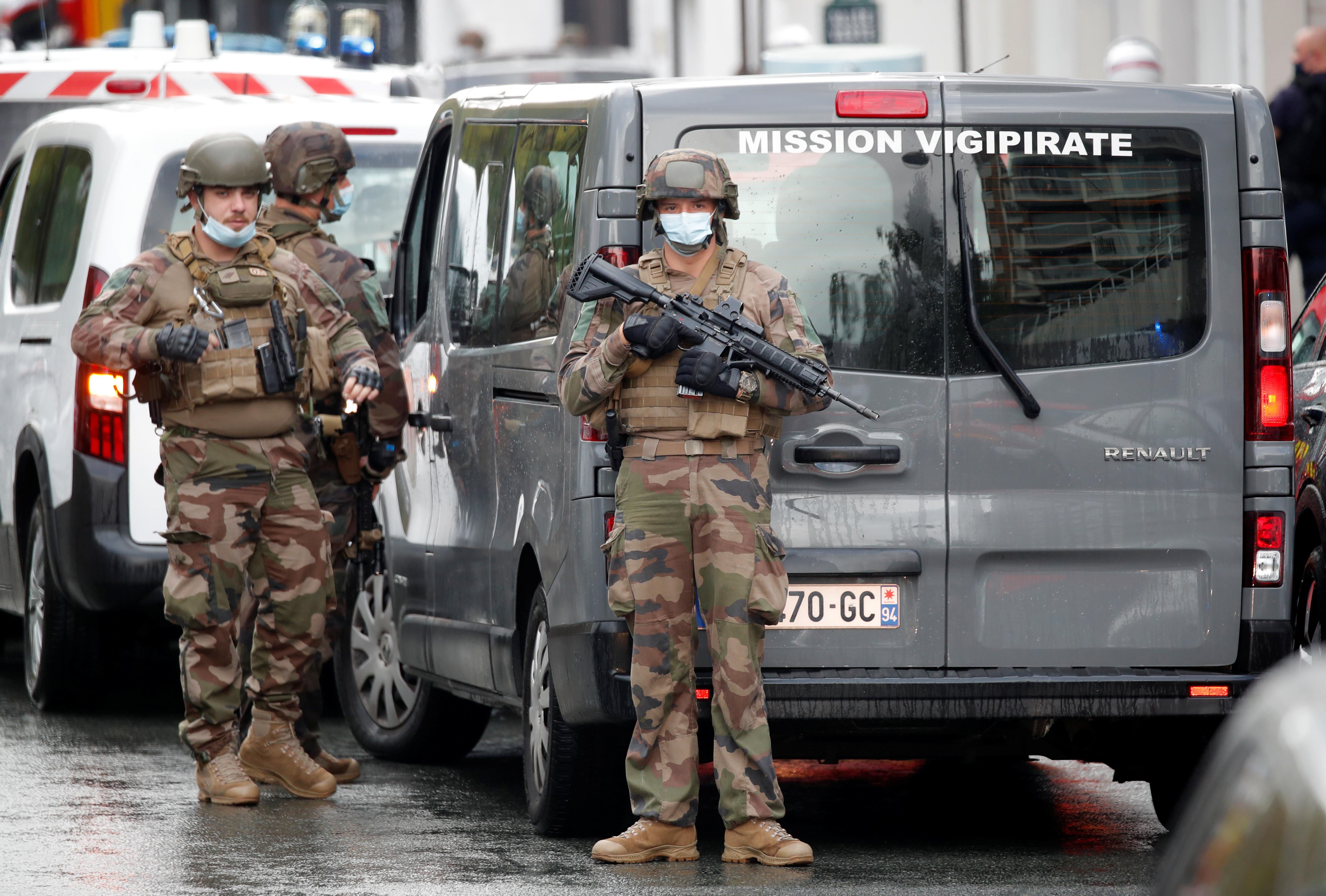 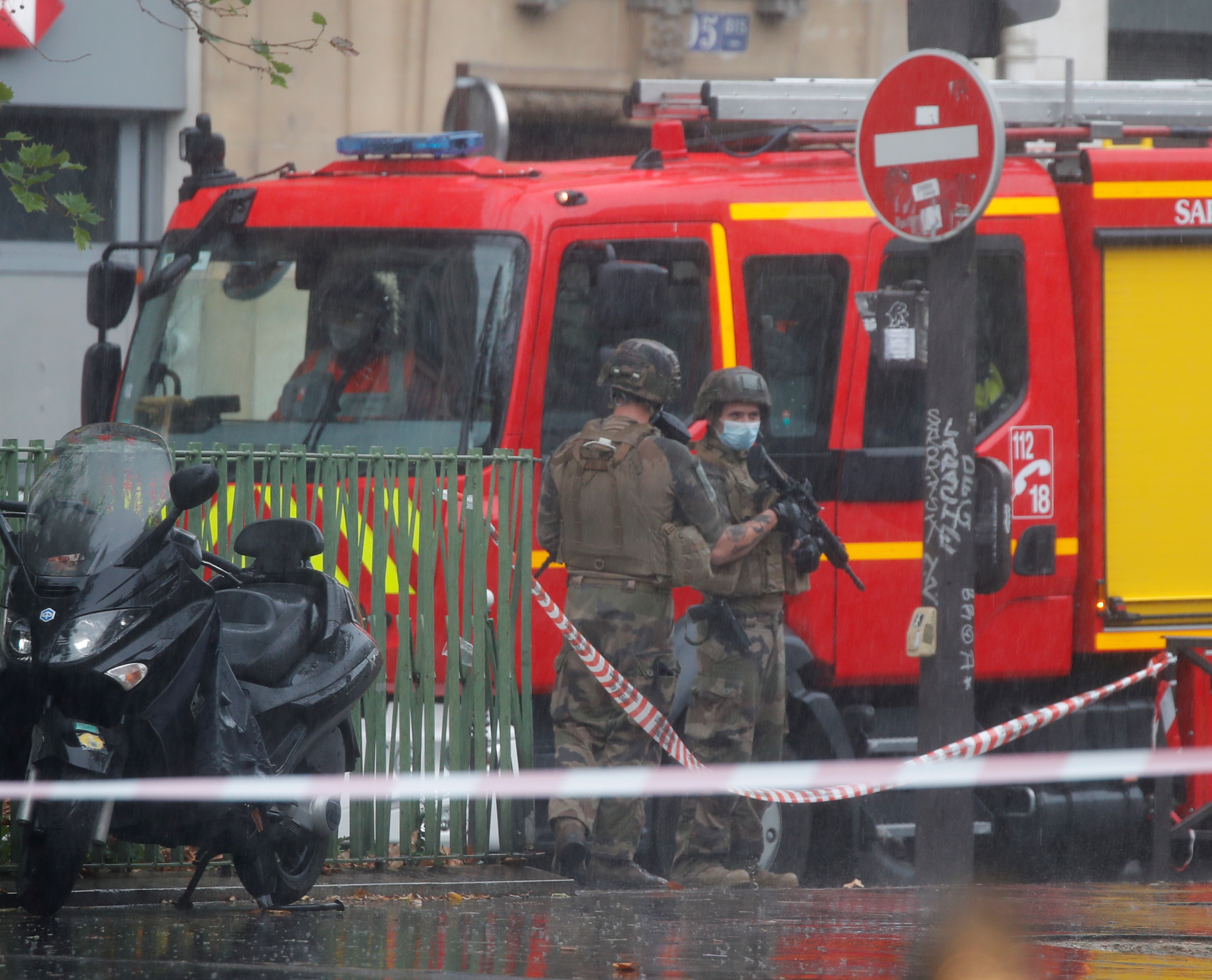 Charlie Hebdo then published them in full in 2006, leading its writers and cartoonists to receive regular death threats.

Paris-born brothers Said and Cherif Kouachi then stormed the magazine's office and  murdered 12 people using Kalashnikovs, before escaping in a stolen car.

Despite this, the latest Charlie Hebdo carries the cartoons on its front page, under the headline "All that for that".

The landmark trial has seen defendants facing a variety of charges including obtaining weapons and providing logistical support to the killers.

Three of the accused are being tried in absentia, as it is believed they went to fight for Islamic State in Syria.

The Kouachi brothers died during a shootout with police at a printing office northwest of Paris two days after the Charlie Hebdo attack.

The next day day, he took hostages at the Hyper Cacher kosher supermarket in Vincennes, executing store employee Yohan Cohen and customers Philippe Braham, François-Michel Saada and Yoav Hattab before being killed in a police raid.

Father leaves hospital after surviving 65 days on a ventilator