Home » World News » Pensioner, 68, grabs crotch of paramedic treating her for a fall

Pensioner, 68, is ordered to sign the Sex Offender Register after grabbing the crotch of a paramedic treating her for a fall and asking: ‘How big is it?’

A pensioner has been ordered to sign the sex offender register after grabbing the crotch of a paramedic treating her for a fall and asking, ‘How big is it?’

Christine Roles, 68, from Flixton, Greater Manchester, felt the medic’s knee as he checked her blood pressure before moving her right hand up to his crotch.

The paramedic, who cannot be named, pushed her hand away but she then tried to stroke his chest before telling him to ‘f*** off’, Manchester Magistrates’ Court heard. 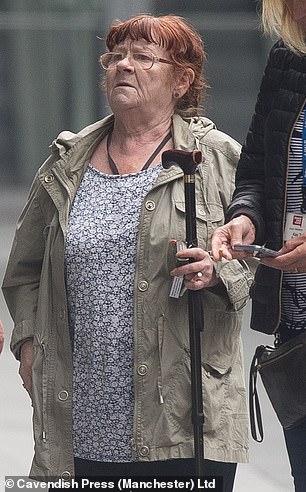 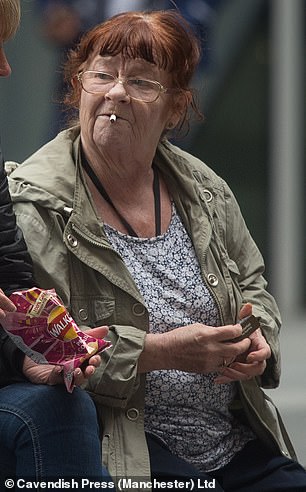 Christine Roles, 68, from Flixton, Greater Manchester, felt the medic’s knee as he checked her blood pressure before moving her right hand up to his crotch. She is pictured outside Manchester Magistrates’ Court yesterday

Police later arrested Roles over the incident on April 24 last year, which took place at her sheltered accommodation, where she lives alone in a flat.

Roles denied sexual assault but magistrates found the incident did take place in a finding of facts hearing.

She had earlier been deemed unfit to formally plead in court due a memory loss problem.

Despite her condition she will have to sign the register alongside paedophiles and rapists for an interim period pending further psychiatric tests.

The incident took place after Roles called 999 due to a fall.

The court heard she had a history of heavy drinking and making hoax calls and at the time was subject to a two-year Criminal Behaviour Order prohibiting her from calling 999 unless in the event of a genuine emergency.

The paramedic said he called at the front door of Roles’ sheltered accommodation block but received no answer, so he went to the window and saw her stood up in the front room.

He told the court: ‘She opened the door and said she didn’t phone and didn’t know why we were there – it was along the lines of “f*** off what are you doing here, I didn’t call for you”.

‘She seemed normal, the normal Christine, I have been to her multiple times. She didn’t seem intoxicated to an extent where she couldn’t understand what was going on.

‘There has been a lot of times where she’s been drinking, she has always denied drinking.’

What is the sex offender register (ViSOR)?

Offenders have to register their details – including name, date of birth, home address, bank details, national insurance number and passport details – with their local police force, who then add them to the national database.

This applies to anyone who has been convicted, cautioned, or released from prison for a sexual offence against children or adults since 1997.

Registrants must tell the police within three days if they change their name or address, and tell them if they are spending seven days or more away from home.

The system allows officers and other government agencies to monitor high-risk offenders once they have been released into the community.

There are currently more than 60,000 registered sex offenders.

Criminals who were sentenced to more than 30 months in prison remain registered for life – those who spent less are on for 10 years.

The paramedic and his colleague followed her into the front room and sat down, before carrying out some medical observations.

He continued: ‘I placed her arm down with the palm up onto my leg and she turned it round onto my knee and I said it is inappropriate to touch me like that. I said. “What are you doing?” She replied: “I was just seeing if I could make you jump”.

‘I moved my knee and we had a discussion about how it is inappropriate to touch people in that manner, especially when you are there to help.

‘Then she tried to grab hold of my crotch and asked “how big it was” she was still sat next to me. She just put her hand across she must have got half way up my thigh, I pushed her hand away. I had to physically remove her off myself.’

The paramedic recalled telling his colleague ‘we are not staying here anymore’ before walking out.

‘As we were leaving she then began to tell us to f*** off and get out, she did begin to stroke my chest again,’ he told the court.

‘We went outside to the ambulance. I didn’t deem there was an emergency reason to phone an ambulance that day, there was no medical findings and there was no sign of injury.’

His colleague told magistrates: ‘She was saying she didn’t want to go to f****** hospital, it was clear that she had had a drink, but she wasn’t in a state worse than I have seen her previously. She was wobbly on her feet.’

In police interview Roles said: ‘I made a genuine call to the emergency services as I fell over at my home address, I was in a great deal of pain.

‘My recollection is vague, as the man was checking my blood pressure I put my hand to his knee to steady myself.

‘I did not attempt to grab his groin or make inappropriate comments.’

She was not called to give evidence but could be heard saying to her care worker, who attended with her, that the hearing was a ‘stitch up’ and complaining that the witnesses had ‘got their stories together’.

Defence barrister Heather Crossthwaite said: ‘Since this incident she had been found unfit to stand trial and unfit to plea, there are concerns in relation to memory difficulties. She has since been seen by an expert.’

Prince Charles Shows Off His Cluttered, Messy Desk and Office and Fans Can't Handle It