A Priceline outlet is one of a number of pharmacies around the country to have taken rapid antigen tests meant for bulk sale to health professionals and repackaged them for individual sale at a healthy profit.

The Therapeutic Goods Administration has launched an investigation after widespread reports of the practice.

“The TGA has commenced investigations into allegations that COVID-19 test kits are being repackaged and relabelled illegally,” a spokeswoman said in a statement. “Retailers, distributors and others who are repackaging or relabelling COVID-19 rapid antigen tests should make sure that they are aware of their obligations under the Therapeutic Goods Act.”

Barely bought by consumers before December, rapid antigen tests are now being stripped from chemist shelves after the federal government and the states changed testing rules to allow greater use of at-home tests. The demand also increased as free PCR testing queues in major cities were overwhelmed following a huge spike in cases of the Omicron variant.

Separately, the Australian Competition and Consumer Commission is monitoring rapid antigen test prices and chairman Rod Sims said he would “name and shame suppliers and retailers” found to be price-gouging. Before Christmas, individual rapid antigen tests were selling for under $10 a test. They now sell for up to $30 – for anyone lucky enough to find one in stock.

Pathology Technology Australia was among several groups and individuals to complain this week to the TGA about the splitting of bulk-testing kits, which are not approved for self-testing and are meant to be used by medical professionals or in places such as aged care homes. 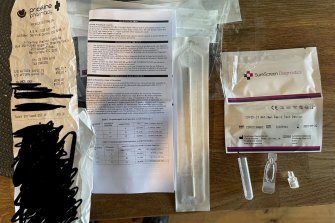 One of the rapid antigen tests meant to be used only by medical professionals but sold at Highpoint Priceline for $55 for a pack of four.

“Splitting up rapid antigen test kits, approved for professional use, and selling them for self-testing is an illegal and inappropriate use of these test kits,” chief executive Dean Whiting said. Selling them individually “could take tests away from aged and healthcare facilities and essential workplaces, where they are vital for keeping people safe,” he said.

Among a flood of evidence from consumers that the practice by pharmacists of repackaging multi-packs had become widespread, The Age was supplied with photos from a Melbourne GP who bought two packs of four rapid antigen tests from a Priceline pharmacy at Highpoint shopping centre in Maribyrnong on Monday.

A receipt shows each four-pack cost $55. The Age has learnt the units were sold to the pharmacy for about $7 a test.

The supplied packaging said: “This test is intended for professional use only,” meaning it is meant to be used only under supervision by a health worker.

The tests are made by major British medical company SureScreen Diagnostics. Their Australian managing director, Troy Stewart, said he was horrified when he learnt this was happening.

He said the tests were sold to the pharmacist with the understanding they were only for uses such as testing staff giving out coronavirus vaccinations, or on-sale to companies who were giving similar tests under supervision.

Mr Stewart went as far as anonymously ringing one of the pharmacies operated by the buyer, to check it was selling the tests appropriately.

“I mystery-shopped them and I asked them if they were selling a good test – they told me they were selling hospital-grade strength. I asked what brand, and they confirmed the brand was SureScreen. I then told them I was the managing director of SureScreen and that you should not be selling them over the counter.”

The owner of the pharmacies, Hassan Ahmed, said there had been unprecedented demand for rapid antigen test kits, and that his Priceline pharmacy in Highpoint and another of his pharmacies in Craigieburn had tried their best to meet demand. But he conceded the SureScreen tests should not have been repackaged.

“A specific range of kits sold from our pharmacies are not intended for the direct sale to the public and [we] have immediately acted to remove these kits from our shelves,” he said.

Priceline, which franchises its stores and is not directly responsible for overseeing stock, was contacted for comment but had not responded by Thursday afternoon.

Sydney resident Melissa Silveri was among those to contact The Age and Sydney Morning Herald about rapid antigen tests. 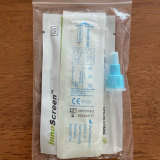 An InnoScreen rapid antigen test sold at a Toongabbie store for $28.

She drove to eight pharmacies and retail outlets in western Sydney on New Year’s Eve trying to find rapid tests.

“We wanted to test our family before holidaying with my in-laws, [who] have been very careful to limit their exposure for heart issues,” she said.

Ms Silveri eventually found tests by maker InnoScreen at a store in Toongabbie for $28 each. “I questioned their price and was told everyone’s charging that. We were desperate so we bought four,” she said. On her return home, Ms Silveri said she realised “they were just in plastic bags – they had been taken out of a multi-pack.

“The instructions say to keep the box and refer to the box, but we just got it in a plastic bag,” she said. “When I rang them, they said, ‘That’s how they come.’ ”