Home » World News » PICTURED: Nazanin Zaghari-Ratcliffe finally gets to do the school run

Nazanin Zaghari-Ratcliffe finally gets to do the school run: Mother beams as she takes her little girl to class after missing out on her first day while held in captivity in Iran

Smiling broadly while holding her seven-year-old daughter’s hand, Nazanin Zaghari-Ratcliffe is back on the school run and doing something she had dreamt of while held captive for 2,173 days in her Iranian jail cell.

The mother-of-one, 43, skipped along with her child Gabriella, carrying her purple rucksack like any other parent, as she dropped her daughter at her North London primary this morning.

The scene is extraordinarily poignant, given the pain her imprisonment on trumped up spy charges caused her, her husband Richard and their only child, who she did not see for the final three years of her Tehran jail term.

MailOnline revealed shortly after she arrived back in Britain in mid-March that Nazanin was most excited about doing ‘normal’ things like take her daughter to school, having missed her first day.

And one witness said mother and daughter were in ‘very high spirits’ as they trotted along the street to get to the gates on time in London’s spring sunshine today.

Ms Zaghari-Ratcliffe is known to have been focussing on having time with her only child after ‘six years of hell’ being held captive by the Iranians.

Gabi had famously refused to believe her mother was coming home after several ‘false dawns’ and years of tortuous detention by Ayatollah Khamenei’s hardline regime, only believing it when she saw it with her own eyes. 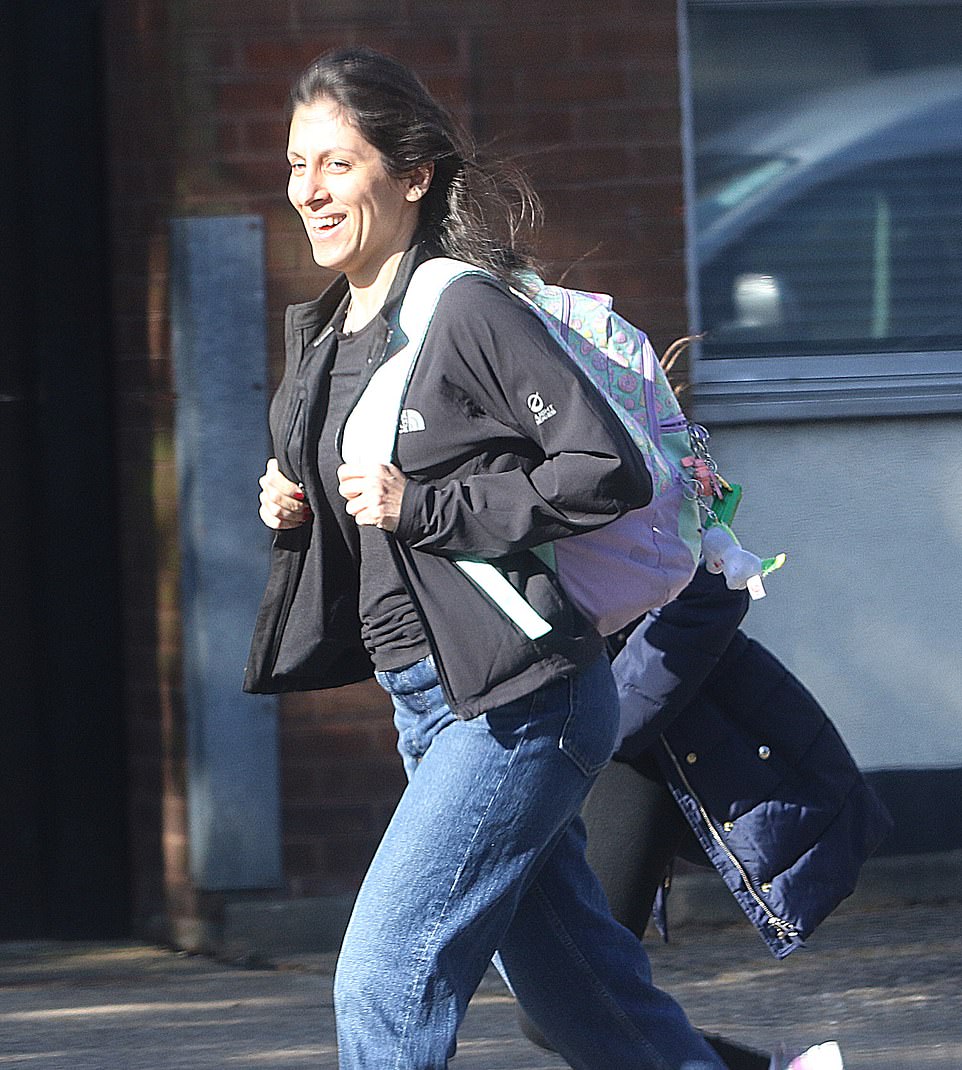 Nazanin looked thrilled to be with her daughter Gabi, having told friends that the school run and going to the shops with her child were what she looked forward to most 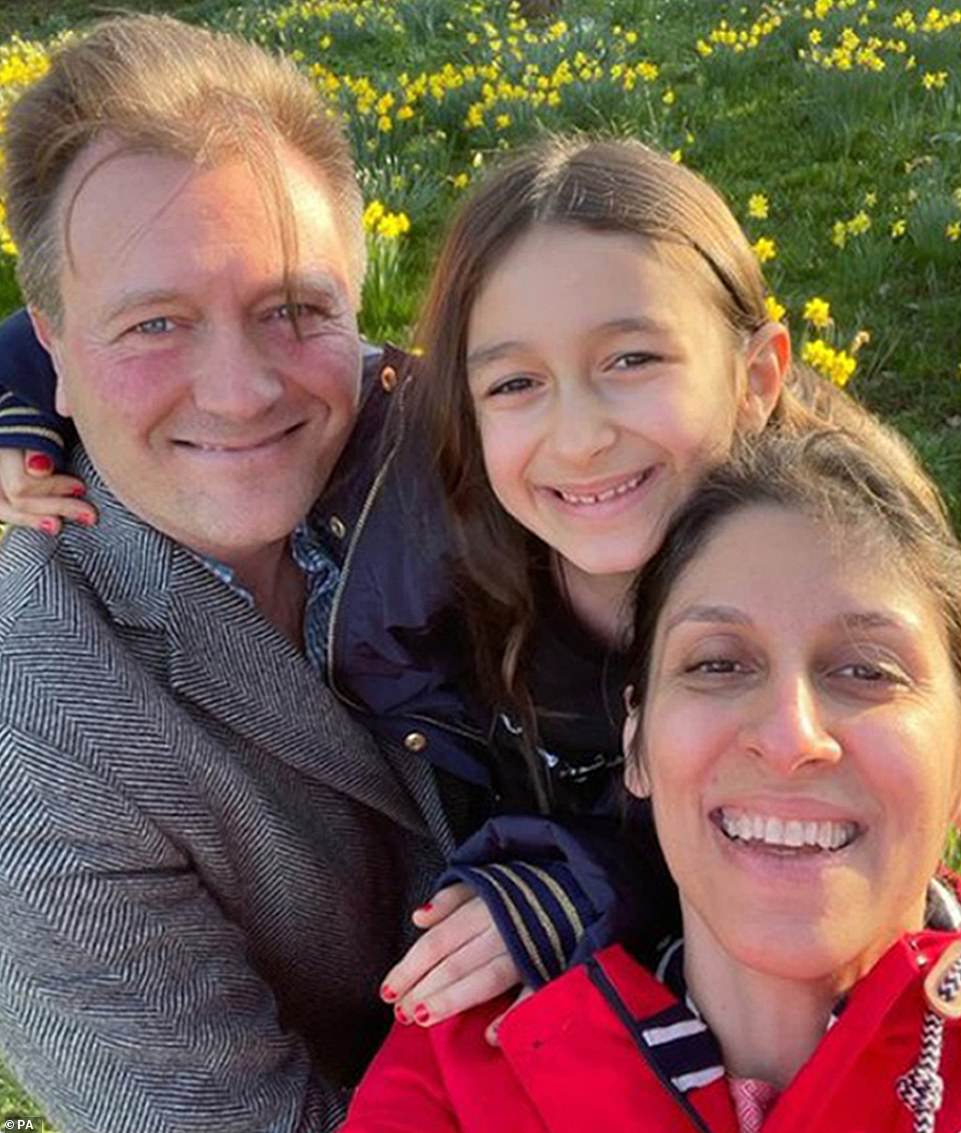 MailOnline has tried to reach Ms Zagari-Ratcliffe to comment.

In an extraordinary and emotional video filmed by the daughter of Anoosheh Ashoori, 67, who was also released by Iran in March in return for a £400million debt repayment, the seven-year-old could be heard yelling ‘mummy, mummy – is that mummy?’ as Nazanin walks down the steps of the British jet at Brize Norton in the early hours of March 17.

The moment Richard and Gabriella were reunited was not filmed – though the tears of joy could be heard – but a picture of the ecstatic family was taken seconds later.

Nazanin then emerged from behind a blue screen and could not stop tenderly hugging and kissing her only child, who she had not seen or touched for three years. Nazanin held her daughter’s hands and stroked her hair throughout the reunion, leaning in for regular kisses and cuddles.

During one tender embrace Gabriella told her: ‘You smell nice’, to which her mother laughed and hugged her again, saying: ‘Do I smell nice? I haven’t had a shower for 24 hours. Is that okay?’.

Nazanin then held her daughter’s hand again and said: ‘I will be back in just a minute’ and then looks down at her and said: ‘That is a very very cool jumper’. Gabriella had also picked out her favourite toys to show her mother on her return.

In the days after her release, Nazanin and her husband Richard shared a selfie of their family taking a walk with spring daffodils in the background in the British countryside.

And while staying in a MoD property their local MP, Labour’s Tulip Sidiq, shared an image of Gabriella and her grinning mother spreading cheese on the lunchtime pizza.  Ms Sidiq tweeted at the time: ‘Nazanin told me that this is what she missed most while she was imprisoned – every day moments with her little girl. Today was Gabriella’s choice of making homemade pizzas for lunch’.

MPs are to stage an inquiry examining the UK’s efforts over the years to free Nazanin Zaghari-Ratcliffe and Anoosheh Ashoori from their detention in Iran, it emerged earlier this month.

The Foreign Affairs Committee said it would review evidence of how their cases were handled by British officials as part of a wider investigation into ‘state level hostage situations’.

Mrs Zaghari-Ratcliffe, 43, who was detained for six years, and Mr Ashoori, who was held for almost five, were released last month after the UK agreed to settle a historic £400 million debt dating back to the 1970s. Following their return both have been critical of the failure of the Foreign Office (FCDO) to secure their freedom sooner. 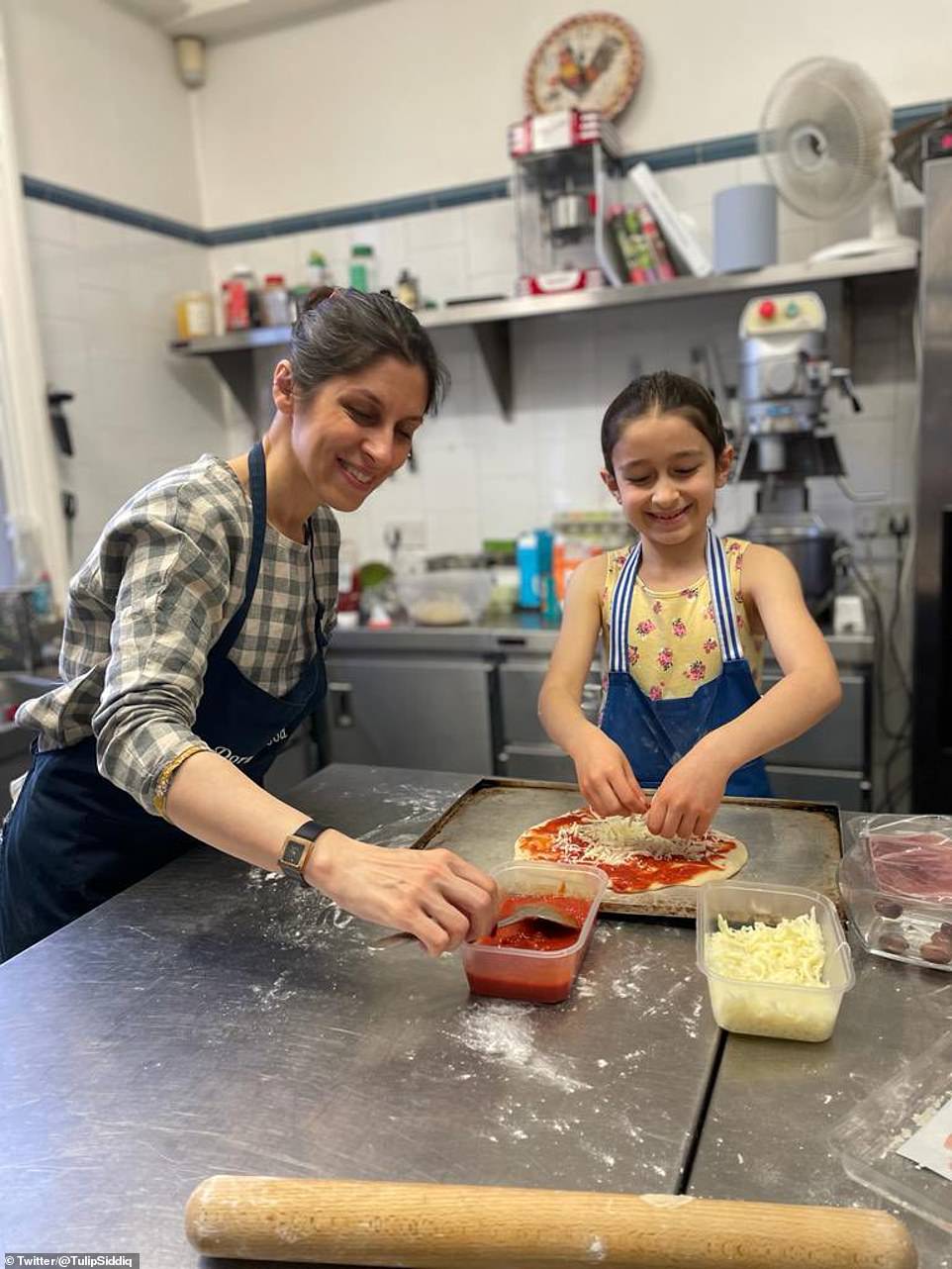 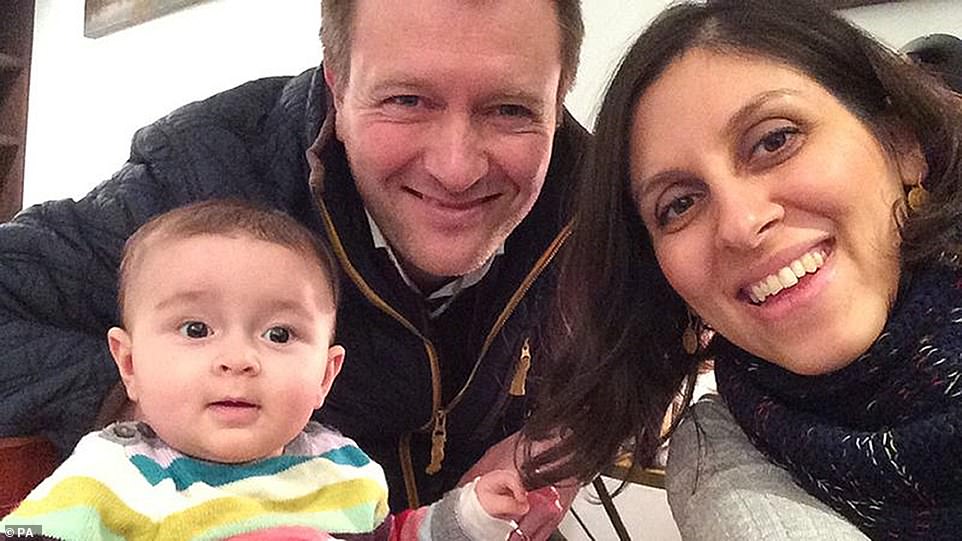 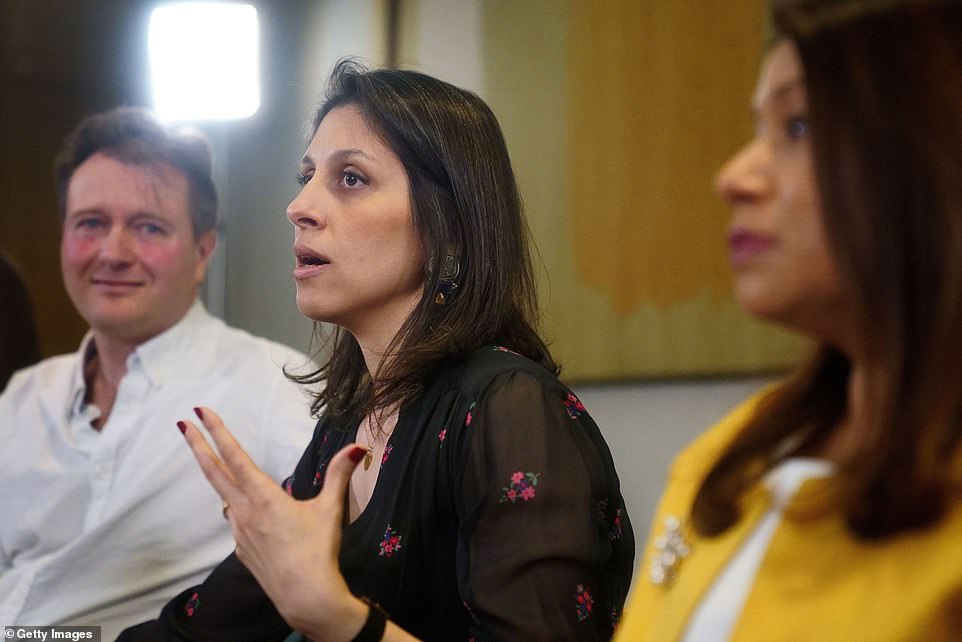 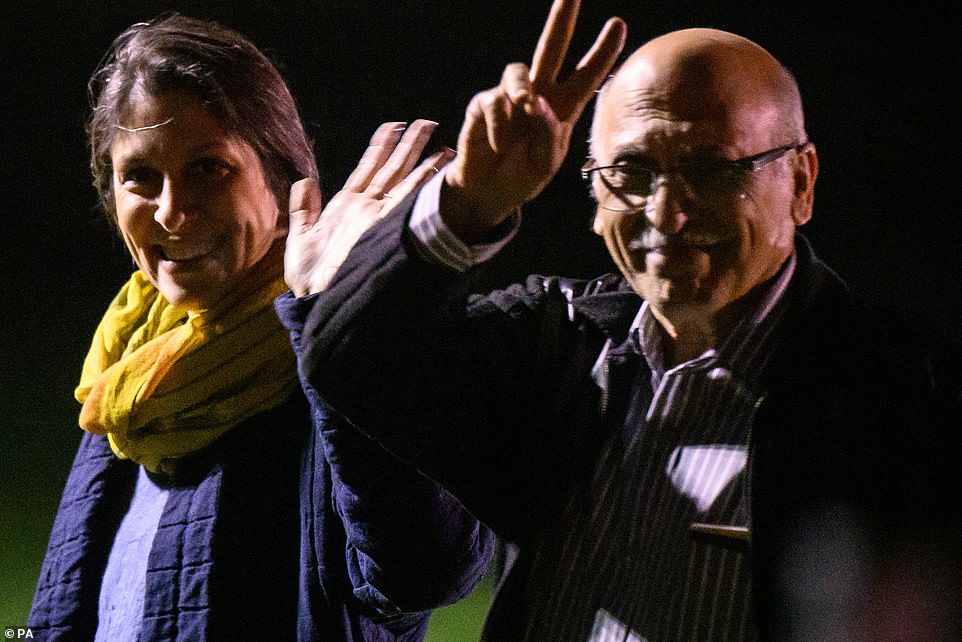 In a press conference with her husband Richard after her release last month, Mrs Zaghari-Ratcliffe took issue with the Government’s handling of her case and said: ‘How many Foreign Secretaries is it going to take for someone to get out? Five?

What will evidence will the inquiry examine?

The inquiry is set to ask the following questions:

‘It should have been one of them eventually. So now, here we are. What happened now should have happened six years ago.  It shouldn’t have taken six years. And I think we have gone through a lot, it has been a tough journey.’

Since arriving back in the UK, both Mrs Zaghari-Ratcliffe and Mr Ashoori’s families have stayed in government safe houses along with their families.

He said that it was also important to look at the wider issues raised by Iran’s use of the detainees as leverage in the debt negotiations.

‘Iran is not the only country engaging in state hostage taking,’ he said.

‘The tactic is fast becoming a tool of choice for authoritarian states and recent high-profile cases have highlighted the challenges governments face when securing the release of hostages held captive by states.

‘This inquiry will examine the support provided by the FCDO to hostages in recent cases, as well as take a look at the broader picture and ask how the Government can clamp down on the practice internationally.’

The announcement of the inquiry was welcomed by Mrs Zaghari-Ratcliffe’s local MP, Tulip Siddiq, who was involved in the campaign for her release.

‘While in Iran, Nazanin was blindfolded, handcuffed, interrogated and subjected to solitary confinement, sleep deprivation and torture,’ she said.

‘The Government has serious questions to answer about why this was allowed to happen to an innocent British citizen, who was caught as a pawn in a political dispute between two countries.

The inquiry will discuss the approach taken by the UK Government in securing the release of the detainees in Iran, and other similar situations.

It will also aim to assess the likely impact the FCDO’s approach may have on deterring other states from using this tactic and will consider options for multilateral action to further deter such behaviour.

In the six years of Nazanin Zaghari-Ratcliffe’s detention in Iran, four UK foreign secretaries held office. But how successful were they in securing her freedom?

Philip Hammond, was in post when Mrs Zaghari-Ratcliffe was detained in April 2016.

He told the Commons at the time that he had raised her case ‘a number of times’ with the then Iranian foreign minister, Mohammad Javad Zarif.

‘We continue to lobby the Iranians regularly about all our consular cases in Iran, including that of Mrs Zaghari-Ratcliffe,’ he said.

He then moved jobs to become Chancellor of the Exchequer.

Boris Johnson scored some of his worst criticism when as foreign secretary in November 2017, he told the House of Commons that Mrs Zaghari-Ratcliffe was ‘simply teaching people journalism’.

This was in spite of her defence that she was on holiday visiting her parents.

Three days later, Mrs Zaghari-Ratcliffe was dragged before a court hearing in Iran, which used Johnson’s remarks as evidence.

In November 2019, after he left office, Mr Hunt argued Britain should pay a £400million historic debt to Iran to help secure her freedom.

Throughout his tenure as foreign secretary, Mr Raab insisted his department was working ‘tenaciously’ to free Mrs Zaghari-Ratcliffe.

He argued against the use of an ankle tag and fought to improve her conditions.

But Nazanin herself was apparently disappointed when Mr Raab failed to attend a Commons debate about her situation in April last year.

Ms Truss earned praise across the House of Commons when Mrs Zaghari-Ratcliffe’s freedom was finally secured this month after six years of imprisonment.

Three injured in pair of separate shootings in Brooklyn