Pigs DO fly! One-day-old porker called Priscilla is found on road after ‘being swept out of enclosure by Storm Ciara’

A-day-old piglet has proved that pigs actually can really fly – after apparently getting blown away during Storm Ciara.

The tiny porker is believed to have been carried off by the wind at the peak of the storm and was found unconscious by a country road at the weekend.

The cute piglet, weighing just one and half kilos, was found near the Norfolk village of Ringland but nearby farmers say none of their animals are missing.

She was was rushed to Taverham Vets, in Norwich, Norfolk, where staff named her Priscilla, put her in a special t-shirt and began hand rearing her. 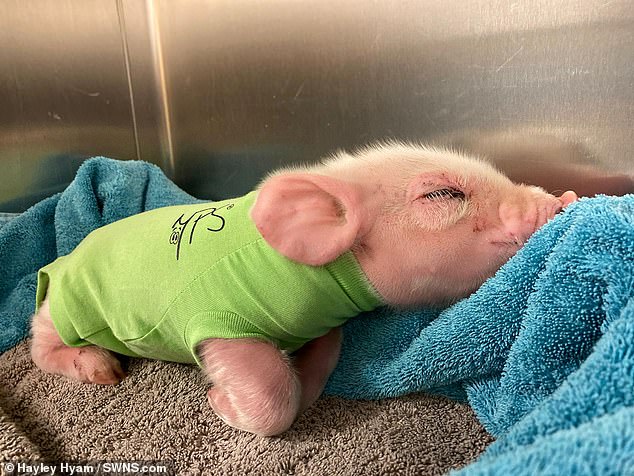 The tiny porker is believed to have been carried off by the wind at the peak of the storm and was found unconscious by a country road at the weekend.

Priscilla showed signs of hypothermia and low blood sugar and also seemed lethargic when she was brought in.

Veterinary nurse Hayley Hyam, 32, said: ‘During the storm, a member of the public brought her into us.

‘They found her unresponsive on the roadside and didn’t want to leave her.

‘She would have passed away if they had left her there.

‘She was really cold and really lethargic so we treated her immediately.

‘We gradually warmed her up and fed her when she was ready and she’s already come on leaps and bounds.

‘We were focused on getting her blood levels back to normal and warming her up- you have to do it gradually for it to be safe. 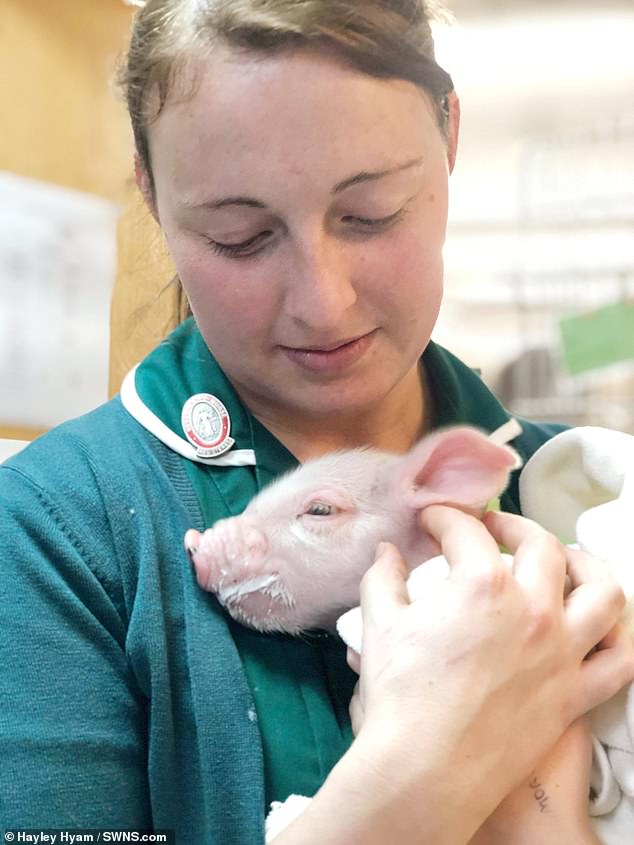 Priscilla the piglet who was blown away by storm Ciara and found unconscious in Ringland, Norfolk pictured with vet Hayley Newport

‘We put her in a little t-shirt and as soon as she was well enough we started feeding her.’

Although little Priscilla is doing well, staff are still no wiser as to how the piglet got there and where she comes from.

The vets checked with a nearby farm but so far have been unable to trace her owner.

Hayley added: ‘We don’t know how she got separated from her mum.

‘There’s a nearby farm but we checked with them and they said they didn’t have any pigs that age.

‘It’s a bit odd, we’re not sure where she has come from- it’s a bit of a mystery. So far, no one has come forward.’

Storm Ciara caused chaos around the country with an amber weather warning issued and wind gusts of 97mph recorded on the Isle of Wight.

It brought much of the country to a standstill disrupting traffic, causing flooding and damage to buildings- and even made pigs fly.

Last week, the winds in Norwich were strongest on the Sunday, when Priscilla was found, with gusts of up to 34mph.

The RSPCA were unable to say for sure how the little pig got there- but said they had issued advice to animal-owners to keep pets inside during the windy weather.

They advised people to bring all small animals inside and, if possible, upstairs in case of flooding.

RSPCA spokeswoman Rachel Butler said: ‘It might be necessary to keep cats inside if the winds become very extreme.

‘Dog owners should plan walks so that the extreme weather can be avoided. Two or three shorter walks may be a better option to avoid being out in the wet weather for a long period of time.’

When Priscilla is fully recovered, staff are going to move her into a hobby farm owned by a senior vet at the practice.

But it seems the piglet has captured the hearts of everyone at the vets- with Hayley admitting Priscilla will be missed.

She added: ‘She’s doing really well and she’s really noisy now! Everyone loves her, she gets lots of cuddles. She’s so sweet, I think we’ll all miss her when she goes!’