London: Britain’s polio-free status could be at risk after routine sewage testing found the virus has returned and is spreading for the first time in nearly 40 years.

The UK Health Security Agency declared a national incident on Wednesday (AEST), announcing that several closely related viruses were found in samples taken in London between February and May, with the findings suggesting some spread between household or family members. 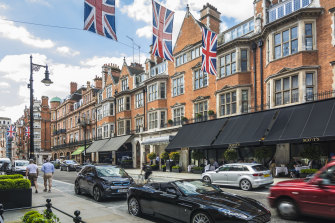 Closely related viruses were detected in samples taken in London between February and May this year.Credit:iStock

The country’s last case of wild polio was in 1984 and the country was declared polio-free by the World Health Organisation in 2003, with low-risk for polio transmission due to the high level of vaccine coverage across the population.

Health experts believe the virus was probably imported from an individual who had recently been given an oral polio vaccine containing live virus, potentially in Nigeria, Pakistan and Afghanistan, which was then shed in faeces, entering London’s sewerage system.

The agency believes that the traveller spread the vaccine-derived virus to “closely linked individuals” and there is now community transmission.

Polio can be spread by poor hand hygiene and, less commonly, through coughing and sneezing. The virus multiplies in the intestine and infected people excrete large quantities of virus in their faeces for several weeks.

It can on rare occasions cause serious illness, such as paralysis, in people are not fully vaccinated. So far, there have been no cases of suspected polio reported, or unexplained cases of paralysis, but GPs and hospitals have been asked to look out for the symptoms.

Wild polioviruses have been eradicated in most parts of the world except in Afghanistan and Pakistan, where they remain endemic.

The vaccine-derived poliovirus – which originates from live attenuated polioviruses contained in oral polio vaccine – still trigger outbreaks, most recently in Ukraine and Israel.

“Vaccine-derived poliovirus is rare and the risk to the public overall is extremely low,” Vanessa Saliba, consultant epidemiologist at the agency, said. “Most of the UK population will be protected from vaccination in childhood, but in some communities with low vaccine coverage, individuals may remain at risk.”

Britain began vaccinating against polio in 1955, and moved to a live oral vaccine in 1961, which allowed the virus to grow in the human gut, offering almost complete protection.

While polio was still spreading in the community the live vaccine was considered preferable specifically because the virus could pass from person to person, so the live vaccine enhanced immunity and ensured people picked it up when young when they were less likely to be paralysed.

But after the eradication of polio, Britain moved to an injectable inactivated vaccine in 2004, which does not shed into the sewage system, stopping spread. It means that any vaccine-derived virus must have come from abroad.

Health officials will also start offering vaccines to those at the highest risk of catching monkeypox, in an effort to curb the biggest outbreak of the disease beyond Africa.

More than 800 cases have been confirmed, data released this week confirmed, with 99 per cent of infections among men. The median age of confirmed infections is 37.

Officials said the outbreak has mainly been in gay, bisexual, and men who have sex with men without documented history of travel to endemic countries. Between 2018 and 2021, there were seven cases of monkeypox detected in the UK.

As US coronavirus cases shatter all records, officials resist restrictions

Prevent 'does not give enough attention to Islamist threat'