Pope Francis has compared the EU to a ‘Nazi dictatorship’ for trying to impose woke rules on language and ban using the word Christmas.

The pope, 84, warned the bloc not to ‘take the path of ideological colonisation’ as he returned from Greece after a four-day trip.

Last week, the EU was accused of trying to ‘cancel Christmas’ after telling staff to avoid the word in favour of ‘holiday period’ because it could be offensive to non-Christians.

Eurocrats published the rule months ago as part of a guide on ‘inclusive communication’, details of which leaked leading to a furious backlash.

Other suggestions in the book included replacing Christian names such as Mary and John with ‘international’ names such as Malika and Julio when using them in generic examples, and swapping the word ‘man-made’ for ‘human-induced’. 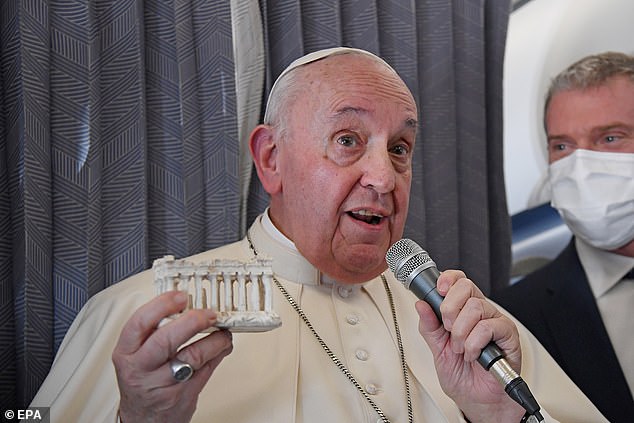 He said while on board the papal plane on return to the Vatican: ‘It is something that throughout history has not worked.

‘In history, many dictatorships have tried to do these things. I’m thinking of Napoleon, the Nazi dictatorship, the Communist one.’

He added that the EU is ‘necessary’ but it needs to avoid  stirring up divisions among its member states.

He said: ‘The European Union… must be careful not to take the path of ideological colonisation. This could end up dividing countries and causing the EU to fail. 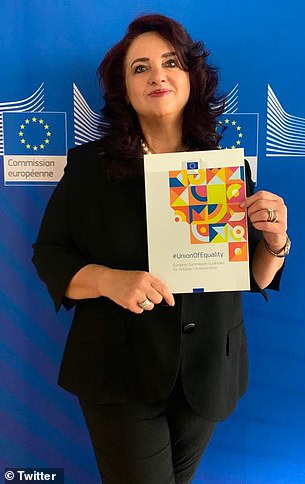 Helena Dalli, the EU’s equality commissioner, issued the guide (pictured) back in October but its contents only just became public

‘The European Union must respect each country’s internal structure, its variety and not try to make them uniform — I don’t think it will do that, it wasn’t its intention, but it must be careful, because sometimes they come and throw projects like this one out there.’

Last week’s EU document also told staff to ‘avoid assuming that everyone is Christian’ and that ‘not everyone celebrates the Christian holidays, and not all Christians celebrate them on the same dates’.

Cardinal Pietro Parolin, the Vatican’s secretary of state, accused the EU of trying to ‘cancel our roots’ by ignoring – rather than respecting – Europe’s Christian heritage.

‘We know that Europe owes its existence and its identity to many influences, but we certainly cannot forget that one of the main influences, if not the main one, was Christianity itself,’ he told Vatican News.

‘Mary, the mother. John, the father. Long live the holy Christmas … I hope that in Europe, no one will be offended,’ he tweeted. 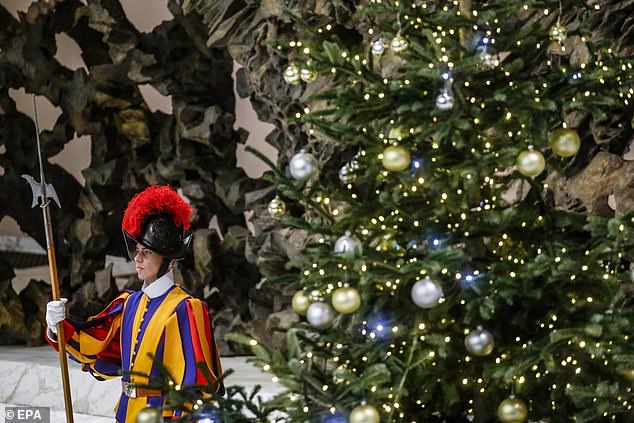 Backlash to the guidelines was led by Italy and the Vatican, with the Holy See’s secretary of state accusing the EU of trying to ‘cancel’ Europe’s Christian roots (file image)

Helena Dalli, the EU’s equality commissioner who put together the guide as part of an equality agenda championed by Ursula von der Leyen, claimed it was a ‘draft document’ that would be revised after ‘a number of concerns were raised’.

‘We are looking into these concerns with the view of addressing them in an updated version of the guidelines,’ she added.

It is not the first time the EU has issued guidance to staff on ‘inclusive’ language.

Back in 2018, staff at the European Parliament were issued with a similar guide that advised against using gendered language such as ‘manpower’ and ‘mankind’.

The new guidelines, aimed at EU translators, also recommended against frequent references to ‘man’ or ‘woman’ in official texts.

Words such as ‘chairman’ should be replaced by ‘chairperson’, and ‘policeman’ or ‘policewoman’ substituted for ‘police officer’, the guide said.

It also recommended the word ‘stewardess’ by avoided in preference of ‘flight attendant’, and ‘principal’ by used instead of ‘headmaster’ or ‘headmistress’.

During his visit to Greece, the pope returned to a Lesbos camp as he called the neglect of migrants the ‘shipwreck of civilisation. 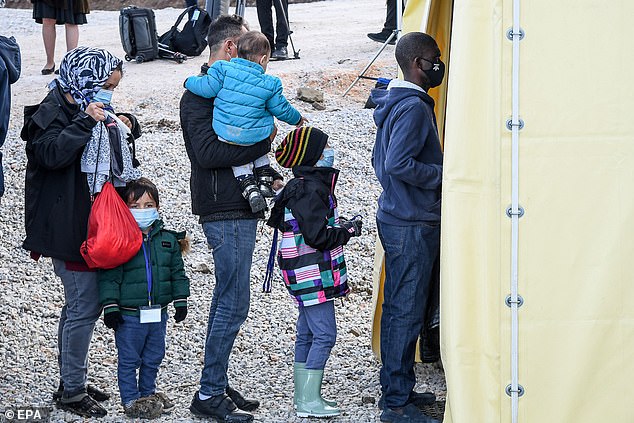 The pope previously visited Lesbos in 2016 and has long championed the cause of migrants.

‘In Europe there are those who persist in treating the problem as a matter that does not concern them,’ the pope said as he spent some two hours at Lesbos’ Mavrovouni camp where nearly 2,200 asylum seekers live.

At the camp, he met dozens of child asylum seekers and relatives standing behind metal barriers and stopped to embrace a boy called Mustafa.

‘I am trying to help you,’ Francis told one group through his interpreter. People later gathered in a tent to sing songs and psalms to the pontiff.

Pope Francis warned that the Mediterranean ‘is becoming a grim cemetery without tombstones’ and that ‘after all this time, we see that little in the world has changed with regard to the issue of migration’.

He said the root causes ‘should be confronted – not the poor people who pay the consequences and are even used for political propaganda’.

Thug throttled ex and yelled 'you need to die, the angels said it's got to be you' in terrifying attack at home