Rome: Deciding not to have children and lavishing affection instead on pets is selfish, according to Pope Francis.

At his weekly general audience at the Vatican on Wednesday, the Pope lamented the fact that some married couples opt to remain childless but transfer their love to cats, dogs and other animals. 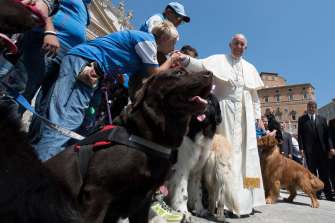 This is not the first time Pope Francis has taken a swipe at pet ownership. Credit:L’Osservatore Romano/AP

“Today… we see a form of selfishness. We see that some people do not want to have a child,” the Argentinian pontiff said during the audience.

“Sometimes they have one, and that’s it, but they have dogs and cats that take the place of children. This may make people laugh but it is a reality.”

He said that couples who did not have children denied themselves the joys of parenthood, a decision that “diminishes us, takes away our humanity”.

The result was that “civilisation grows old without humanity because we lose the richness of fatherhood and motherhood”.

While his predecessor, pope emeritus Benedict XVI, is an avid lover of cats, Pope Francis does not have a pet living with him in the Vatican.

He has shown affection for animals during his papacy, however – in 2016, during an audience with circus performers, he was introduced to a baby panther and patted a six-month-old tiger cub while it drank a bottle of milk. 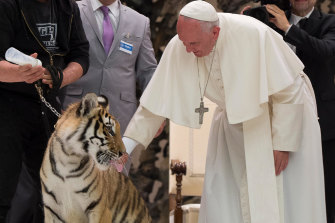 Pope Francis patting a big cat – a young tiger – at an audience with circus troops in 2016. Credit:L’Osservatore Romano/AP

His remarks about parenthood provoked anger on social media, with many people pointing out the Pope had chosen to remain childless by entering the Catholic Church as a priest.

One woman wrote on Twitter: “Well, what does that make me, as I have neither [pets or children]? People have very valid reasons for choosing not to have children. The planet will be just fine with my decision and that of others like me.”

Predicting the Pope’s criticism would upset many people, one user joked: “Hey guys, check out the Vatican’s new atheism ad.”

The pontiff was also accused of being “out of touch with reality and humanity”.

The Italy-based International Organisation for the Protection of Animals said it was “strange to think that the Pope considers the love in our lives limited quantitatively”.

“It is evident that for Francis, animal life is less important than human life. But those who feel that life is sacred, love life beyond species,” said Massimo Comparotto, its president.

In 2014, Pope Francis told the Italian newspaper Il Messaggero that having pets instead of children was a “phenomenon of cultural degradation”, and that emotional relationships with pets were “easier” than the “complex” relationship between parents and children.

He has in the past denounced the falling birth rates in the developed world.

Italy has struggled with population decline for decades – long gone are the days when women had four or five children. The birthrate has fallen to its lowest since the country was unified in the 1860s, recent figures show.

It has prompted warnings that the country’s population will shrink by a fifth over the next 50 years.