Former cabinet minister Christian Porter will appeal a Federal Court decision to stop his barrister acting for him in his defamation case against the ABC, despite settling the case in question.

Mr Porter and his then-barrister, Sue Chrysanthou, SC, were ordered in June to pay legal costs after losing a legal battle with Jo Dyer, a friend of the woman who accused Mr Porter of a 1988 rape before taking her own life last year. 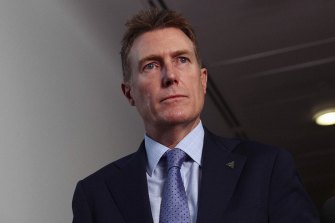 Christian Porter will pursue the appeal “on a matter of principle”. Credit:Dominic Lorrimer

Mr Porter strenuously denies the allegation, which was reported by the ABC in November last year, and had commenced defamation proceedings against the broadcaster, led by Ms Chrysanthou.

But in May, Ms Dyer successfully barred Ms Chrysanthou acting for Mr Porter on the basis that she had previously advised her over an article in The Australian published after Ms Dyer appeared in an earlier episode of the ABC’s Four Corners program about Mr Porter and other members of the government. Four days after that decision, Mr Porter settled with the ABC.

Although the defamation case has discontinued, Mr Porter is now pursuing an appeal against the court’s decision to stop Ms Chrysanthou acting for him. 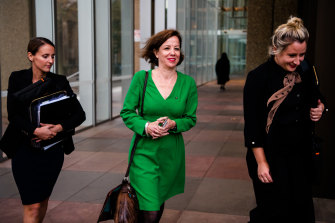 Jo Dyer, centre, outside the Federal Court in May. Credit:James Brickwood

In a case management hearing on Friday, Mr Porter’s barrister Callan O’Neill was asked whether it’s now a fight about costs – which are expected to go into the hundreds of thousands of dollars.

“On one view, costs, but also a matter of principle,” he said. The matter is “very important” for how “an application of this type should be made and heard in the future”.

Justice John Middleton noted that “often matters of principle go away when sufficient money is paid over” and questioned whether it is a case that could go to mediation.

That elicited some laughter from Mr O’Neill: “I don’t hold out much hope but I will seek instructions on that matter”.

Porter’s team is seeking fresh evidence in the form of a document that was an exhibit in the original trial, but with key information redacted. Dyer’s solicitor opposed the application.

“If [documents] contain information in their unredacted form which should have been before the trial judge then that is relevant,” Justice Middleton said. “Sounds like it should be flushed out and seen by somebody, even under certain conditions.”

The full court appeal is set to be heard in February next year.

Heartbroken gran, 79, tells of screams as dad-of-three grandson, 35, murdered with gardening fork yards from her door