A pregnant woman has shared harrowing CCTV footage of her ex-boyfriend knocking her out with a single punch.

Ashleigh Booth, 25, was left with a cut face, a burst eardrum and suffered bruising all over her body after the attack in Halifax, West Yorkshire.

Miss Booth has released the disturbing footage to help trace the ‘scum’ who did it and named him as Gareth Warne, who she claims is wanted by police for assaulting her.

The attack took place on November 22 and Ashleigh shared it on Facebook today. 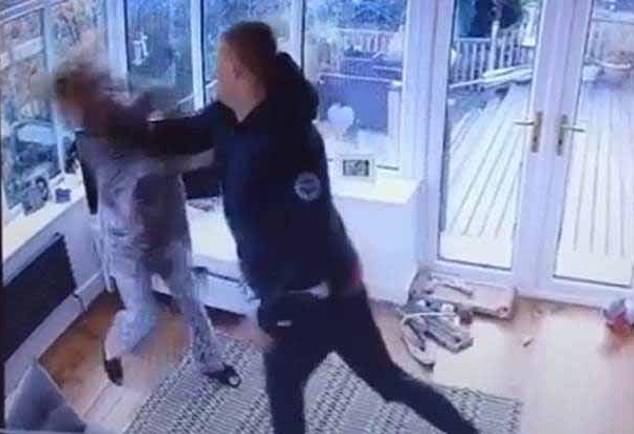 This is the moment Ashleigh Booth, 25, was floored by her ex-boyfriend while she was four weeks pregnant 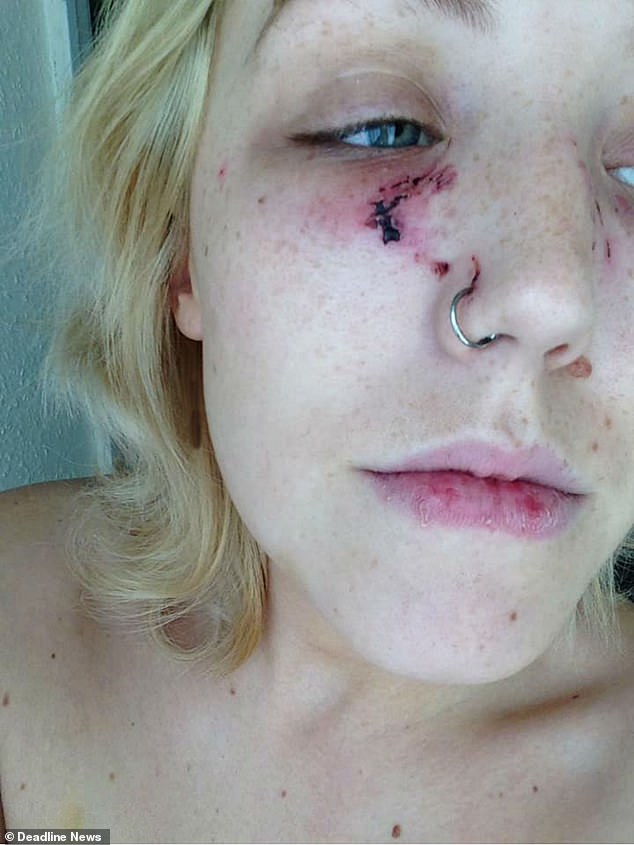 The incident, which was reported to police, left the young mother unconscious in an attack that left her with cuts on her face

The video shows the man becomes increasingly angry and threatening towards his victim, who is sobbing.

The man then lashes out without warning, hitting the woman in the face and sending her crashing to the floor where she lies stunned for several seconds.

She said today: ‘All I wanted to do was share my story and show that domestic violence does go on and is the most horrific thing anyone can deal with, I wouldn’t wish it on my worst enemy. I didn’t deserve any of what happened to me.

I have been on the phone to the police this morning and given them more and more addresses to search and they are going to do everything that they can to get him today’.

Ashleigh, who was four weeks pregnant at the time of the attack, claimed today that police were still trying to track down the attacker.

The clip begins being filmed inside of what appears to be a conservatory or back porch area of a house.

A man can be seen moving forward at her and arguing as they move into the conservatory area.

The woman appears to be crying and keeps pushing back the man as he moves aggressively forward.

He suddenly swings at the woman, knocking her violently to the ground before nonchalantly walking away, leaving her sprawled on the floor.

Another person can briefly be seen at the door entering to the conservatory as the woman struggles to get up.

Asking people to share the footage, Ashleigh’s posted: ‘In November he broke into my dad’s property and burst my eardrum by smacking me, leaving me unconscious whilst I was 4 weeks pregnant’.

She added: ‘Please share if you have any idea of his whereabouts then please inform me or the police! I can’t wait for you to get sent down for what you have done.’ 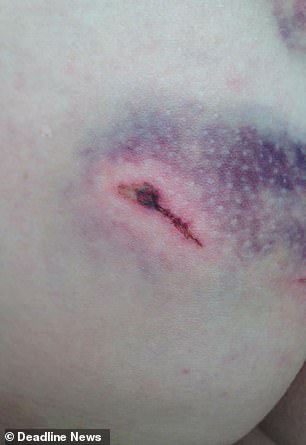 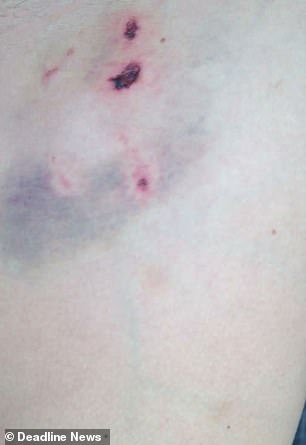 Comments underneath Ashleigh’s post unanimously condemned the behaviour of the man.

Hayley Grisdale said: ‘Absolute scum! Hate men who even lay a finger on a lady. He should be locked away, f****** idiot’

Nicky Irvine commented: ‘Hope you are ok. His time will come I’m sure of it, any man that lifts a hand to a women is no longer a man.’

Lisa Winstanley wrote: ‘Don’t understand why this animal isn’t behind bars. All the evidence should be well enough to lock him up. Please tell me you’re pressing charges because ffs this animal needs teaching a lesson.’

Hayley Alexander commented: ‘That video is heartbreaking. Stand ya ground to the very end. I hope they chuck away the key. Xx’

Karen Bacon said: ‘What a piece of sh**, wonder if his mates think he’s a big man now, or see him for the worthless scumbag he is.’

Courtney Joan replied to the post: ‘I don’t know you, or him. But this has made me feel sick! What a disgusting excuse of a man! I hope you get rid, and stay rid for yourself! So so sorry that this has happened to you!’

Woman, 31, stabbed to death at house in rural village as man arrested for murder