Days of thunder! Trump plans to take ‘The Beast’ for a lap at the Daytona 500 as he prepares to become the first president ever to grand marshall the race

President Trump reportedly is planning to ride around the Daytona International Speedway for a lap in his armored limo The Beast before Sunday’s Daytona 500 race.

While the details have yet to be finalized, several individuals familiar with the plans say the preparations are underway, John Roberts of Fox News tweeted late on Friday.

Trump and his wife, First Lady Melania Trump, flew to Florida this weekend. They were photographed descending the steps from Air Force One after landing in West Palm Beach, just a few miles from the Mar-a-Lago compound.

The president will head to Daytona Beach, Florida, some 220 miles north of his Palm Beach vacation getaway on Sunday. 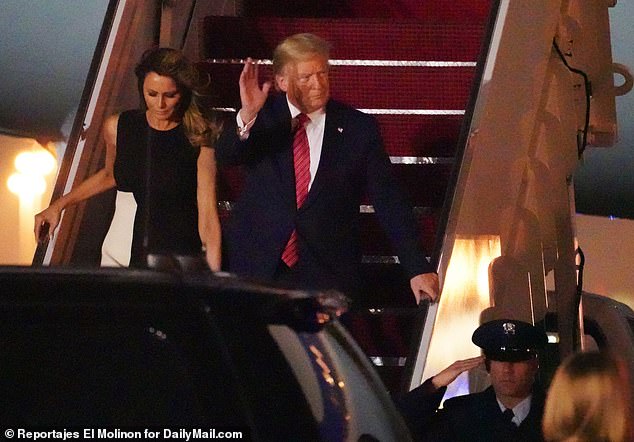 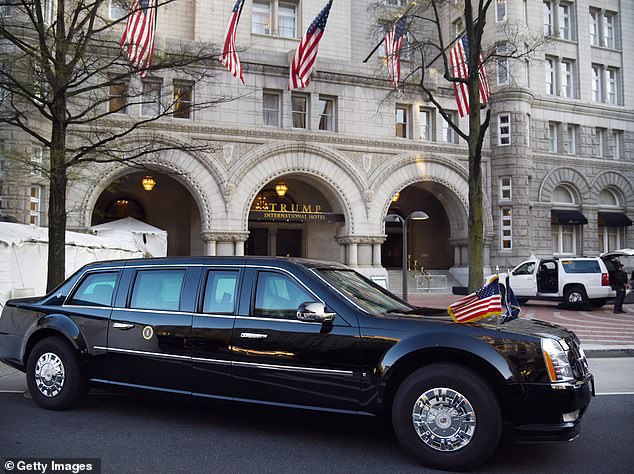 The president will reportedly take a spin in his armored limo, The Beast, before Sunday’s Daytona 500 race. The Beast is seen in front of Trump’s hotel in Washington, DC, in April 2018 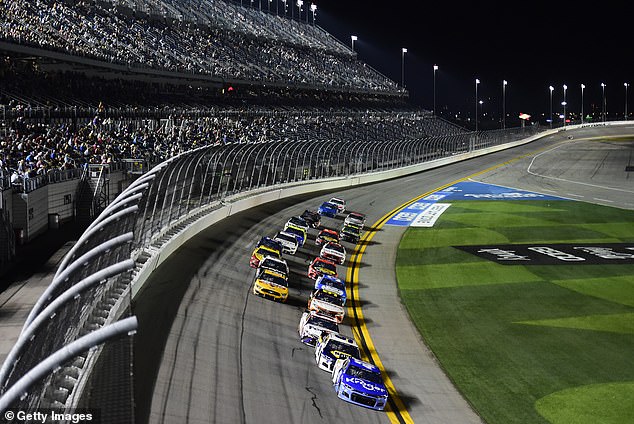 Plans are underway for The Beast to take a lap around Daytona International Speedway in Daytona Beach, Florida (seen above during a race on Thursday)

Trump will become the first president ever to stay ‘start your engines!’ when he is installed as grand marshal of the Daytona 500.

He is breaking his Presidents Day weekend to travel from Mar-a-Lago up the Florida coast for the event.

But he will miss out on seeing his own campaign’s Chevrolets compete: a Silverado branded Trump-Pence 2020 was racing Friday and a Camaro will compete Saturday in the same colors. 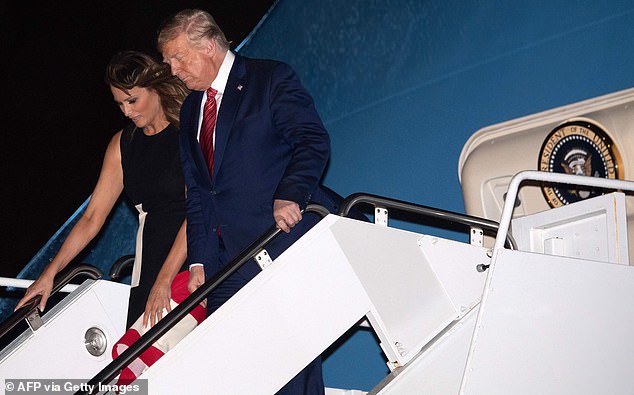 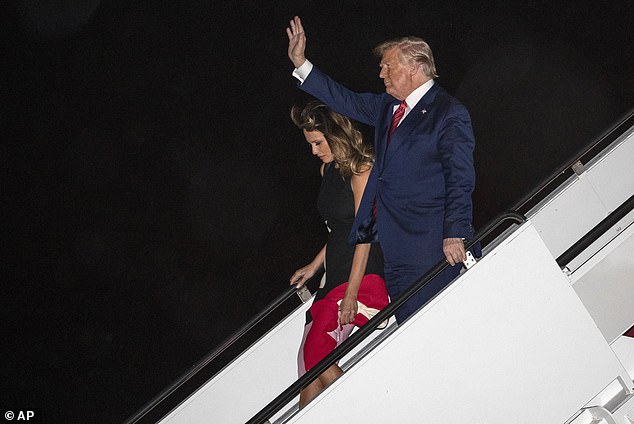 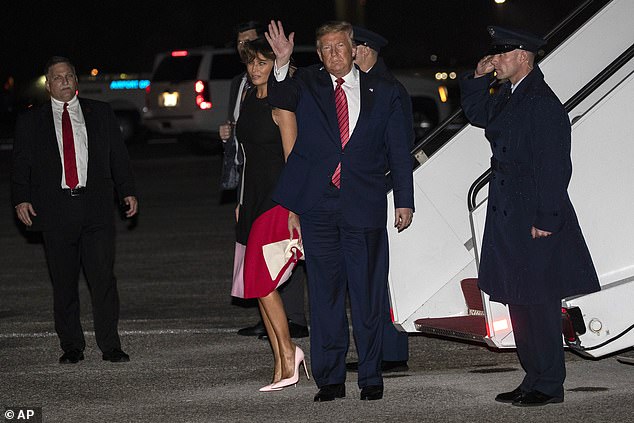 The White House announced his attendance at Daytona earlier this week and his status as Grand Marshal was unveiled Friday.

The only president to attend before was George W. Bush, who witnessed Dale Earnhardt Jr. win the 500 for the first time.

There were signs that the president would be making a trip to the Florida speedway before it was officially announced.

The Federal Aviation Administration issued a flight restriction for Sunday indicating that President Trump would be attending the NASCAR race. 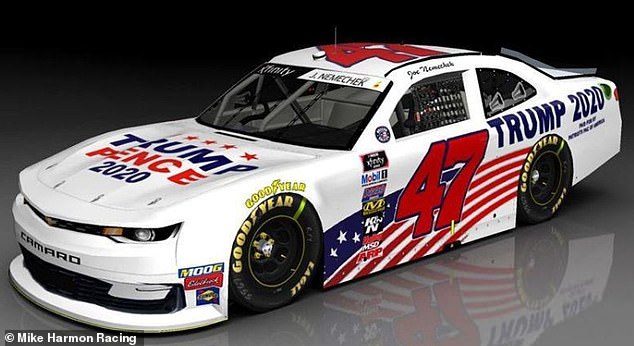 Trump power: A Trump-Pence 2020 branded Chevy Camaro will compete on the circuit Saturday 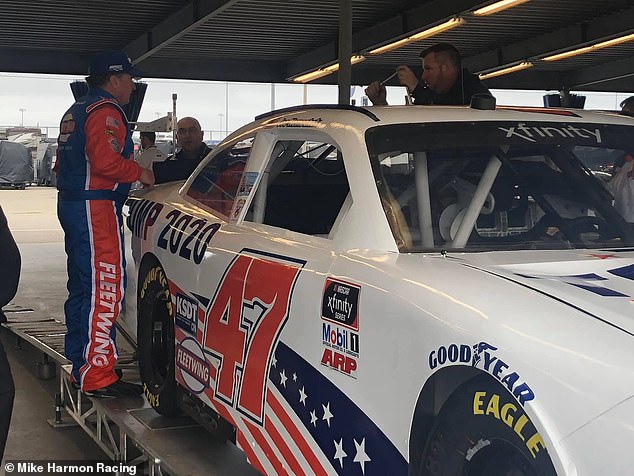 Getting ready: The Camaro on the ground will be accompanied by a Trump banner flying overhead 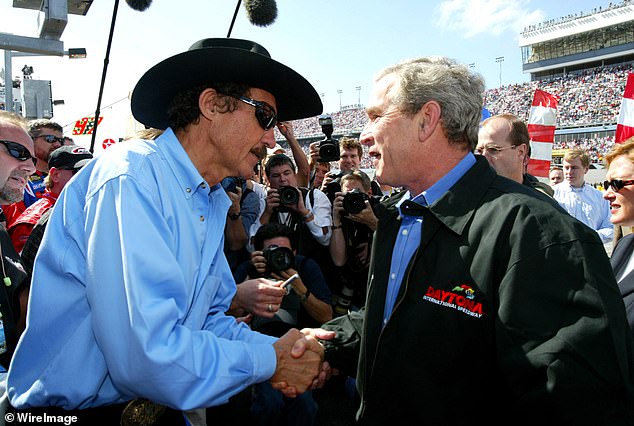 Back in 2004: NASCAR legend Richard Petty and President George W. Bush met during pre-race introductions at the Daytona 500, the last attended by a president

The visit to Daytona is the latest in a series of presidential outings to events where he can expect cheers – as opposed to the jeers which greeted him at the World Series in Washington D.C. in October.

And his campaign is taking extra advantage of it by flying a banner near the speedway on the day of the race.

Television viewers will also get a taste of Trump’s re-election efforts, as an ad title ‘New Heights’ will air during the race’s playing. 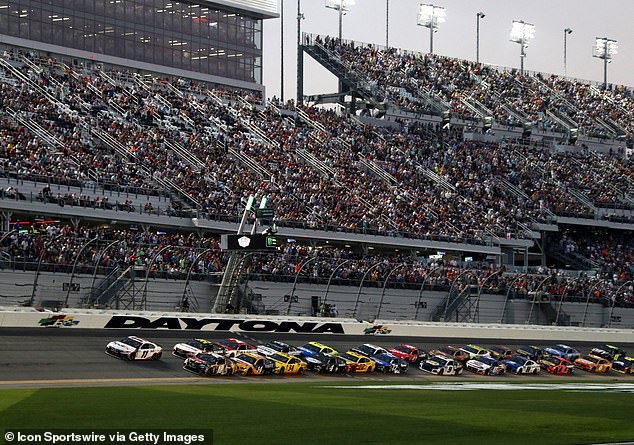 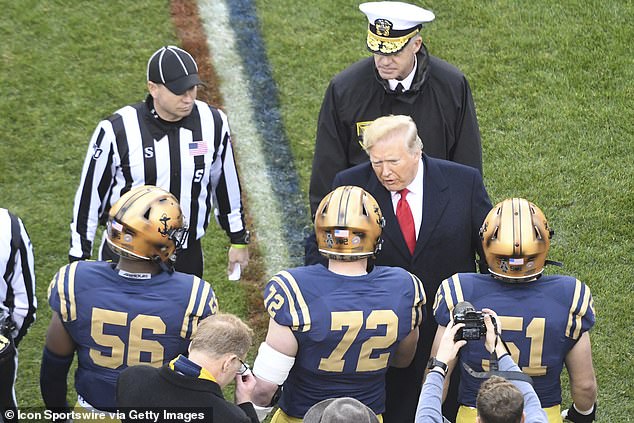 President Trump attended the Army-Navy game in December in Philadelphia, Pennsylvania, which is a key 2020 swing state 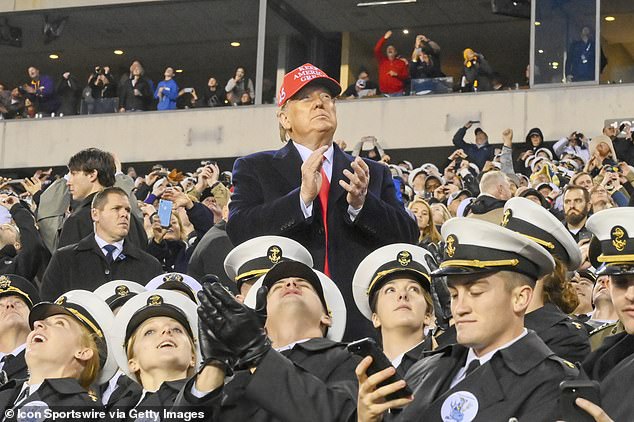 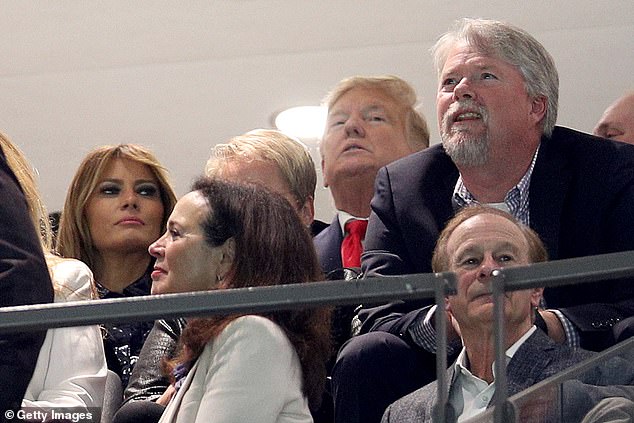 Then in January, the president and first lady went to the College Football National Championship game between the Clemson Tigers and the Louisiana State University Tigers 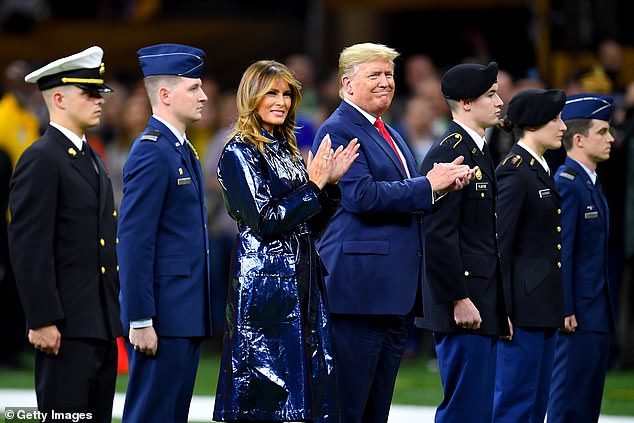 Trump is scheduled to spend part of the President’s Day weekend at his private club Mar-a-Lago in Palm Beach, Florida.

Trump last year praised retired driver Mario Andretti, reminiscing about a ride Andretti gave him in a race car for his reality show ‘The Apprentice.’

‘I said, “Mario, get me out of here. I want to get out of this car,”‘ Trump recalled. ‘We went so fast. We literally — we covered four blocks in like a second.’

Trump’s visit to the speedway continues his monthly tradition of attending a sporting event to get him in front of more Americans as the 2020 race heats up.

In November,  the president went an Alabama-Louisiana State University college football game and was greeted with cheers in Tuscaloosa.

In December, Trump traveled to Philadelphia, Pennsylvania – a key swing state – for the playing of the annual Army-Navy game.

And a month later, he was taking in college football again – this time the national championship game between LSU and Clemson in New Orleans.

The optics have not always worked out for the president when he’s appeared at matches.

In late October, when the Washington Nationals were playing in the World Series at home, Trump attended a game at Nats park. There the liberal D.C. fan base booed the president and chanted ‘lock him up.’

The president also got a mixed reception back home in New York when he attended the Ultimate Fighting Championship in early November at Madison Square Garden, entering to a mix of cheers and boos.

Woman smashes through car showroom in India causing £5,300 of damage

Rare double waterspout spins through the sky in southern Thailand