London: Prince Charles has been announced as a special guest at a black-tie charity gala in London, where the city's elite will gather to raise thousands of pounds to support the Red Cross bushfire relief appeal.

The future king, who is a passionate environmentalist and avid climate change campaigner will attend the ritzy event on March 12, which is being organised by the Australia's High Commissioner to the UK George Brandis.

Intense bushfires throughout the Australian summer gutted several communities along the eastern seaboard. More than 30 people were killed, thousands of homes and buildings were destroyed and the impact on fauna and flora was widespread.

In the aftermath of the fires, Prince Charles released an emotional video message to the people of Australia during the bushfires, saying he and Camilla had been in "terrible despair" watching the "appalling horror" unfolding on their television screens.

The heir to the throne tops an elite guest list, which includes the colourful English novelist Jeffrey Archer who will be a celebrity auctioneer on the night, selling off several donated items and experiences including a Philip Bacon artwork, Qantas flights between Australia and the UK and an evening's entertainment in an exclusive box at the Royal Albert Hall. 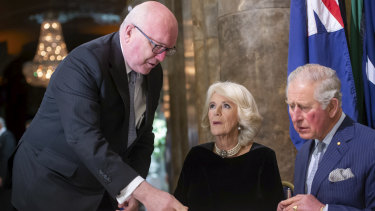 The Prince of Wales with his wife Camilla, the Duchess of Cornwall sign the guest book with Australia’s High Commissioner to the UK George Brandis at Australia House in London.

Lord Archer is famed for his ability to extract huge sums out from Britain's famous and wealthy on behalf of charities, raising £2,902,650 ($5,680,112) across 20 auctions last year alone.

Several more high-profile guests are expected to be among those to confirm their attendance in the coming weeks.

Australian musical theatre star Josh Piterman, who is currently playing the Phantom in Andrew Llyod Webber's smash-hit West End musical The Phantom of the Opera, will perform on the night, having been given the night off by production companies Cameron Mackintosh Limited and The Really Useful Group.

“To be asked to perform at such an esteemed event for a cause that is so close to my heart is extremely humbling, exciting and nerve-racking," Piterman said. 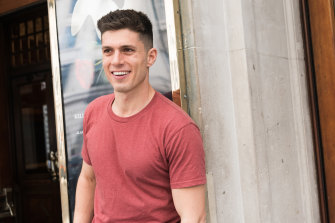 Australian musical theatre performer Josh Piterman has been given the night off playing Phantom in The Phantom Of The Opera to perform at the event.Credit:Andrew Mason

"Watching the devastation back home during the bushfires was intensely heartbreaking."

I wanted to assist in some way but felt a sense of helplessness from the other side of the world, so I’m thrilled I can lend my voice to this special evening and extremely thankful to the wonderful team at The Phantom of the Opera for allowing me a night off from the show to do so."

"It’s going to be an amazing night," he said.

London's Lord Mayor William Russell has donated the use of London's historic Mansion House – his office and home in the Square Mile – for the benefit.

"The Australian bushfires are absolutely devastating. Lives have been lost, homes burnt to the ground and communities completely torn apart by this disaster."

"International aid is needed urgently and we need to act now. The City of London is ready to play its part and I hope this charity event will help raise thousands of pounds for this pressing cause," he said.

Australia's High Commissioner to the UK George Brandis said the generosity displayed so far demonstrated the close ties between the two countries.

"The people of our two countries have always been there for one another in times of need, both in war and in peacetime emergencies," he said. "The response of the British people to the Australian bushfire emergency illustrates yet again how strong are the bonds between us."