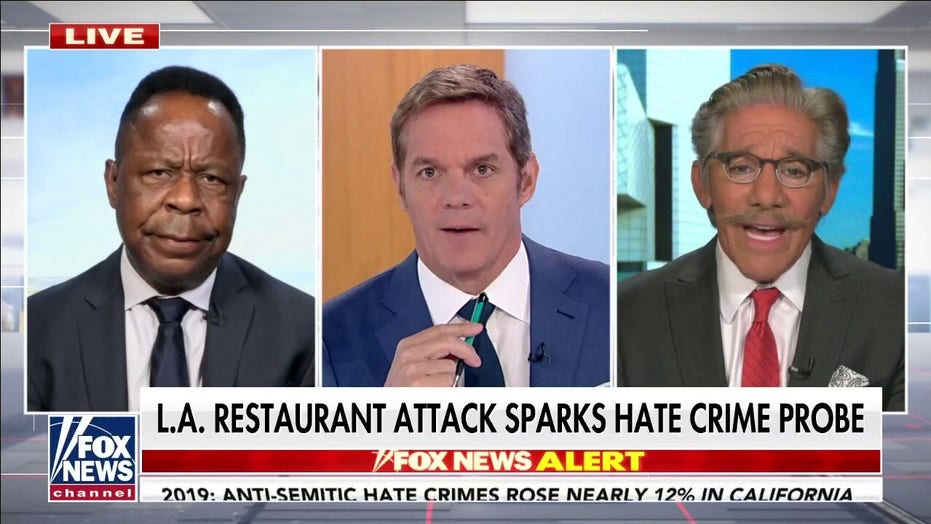 The Fox News contributor reacts to video footage of an altercation involving Jews and Palestinians in California and Mayor Lighfoot’s preferential treatment towards non-white reporters.

The Los Angeles Police Department is investigating a possible hate crime after pro-Palestinian demonstrators hopped out of their vehicles passing a Beverly Grove restaurant and allegedly began singling out and attacking Jewish diners as the brawl was caught on camera.

An LAPD spokeswoman confirmed to Fox News on Thursday that three suspects are still being sought following the incident that happened just before 10 p.m. Tuesday outside a sushi restaurant in the 300 block of North La Cienega Boulevard in the Beverly Grove area.

The Anti-Defamation League of Los Angeles is offering a $5,000 reward for information that leads to the arrest or conviction of the individuals responsible for the “anti-Semitic assault.” As violence in Israel and the Gaza Strip has intensified in the Middle East, video from Los Angeles shows members of a car caravan flying Palestinian flags while driving by the sushi restaurant’s outdoor dining section.

The Los Angeles Times reported that a witness, who asked to remain anonymous for safety reasons, said some people from the caravan threw bottles and chanted “death to Jews” and “free Palestine.”

“Somebody in one of the cars driving by started throwing glass bottles or glass cups at the tables and they shattered everywhere,” a female diner, who didn’t want to be identified, told KCBS-TV.

Several vehicles stopped, and men who got out began running toward the tables and began asking “Who’s Jewish?” the woman said. KTLA-TV reported that another witness, who also was not identified, said fighting erupted when two men replied that they were.

Cellphone footage depicting the brawl from different angles showed a man being punched on a sidewalk.

The man, who wished to be identified only as M, told KABC-TV he was at the restaurant helping plan an upcoming wedding with four Jewish friends when the car caravan rolled up. Video showed some men dressed in black getting out of a car and pushing M’s friend to the ground.

M said he grabbed a stanchion, the metal bar used to hold up red velvet rope barriers, to scare the men. Video shows him swinging it at the other men.

“There were many girls behind us. I was scared that they would attack everybody,” he said.

M was followed to his car, punched and pepper sprayed, and was treated at a hospital, he said.

No arrests were immediately made. Police said five victims were punched or hurt by broken glass, but nobody was seriously injured.

“We as a city condemn last night’s organized, anti-Semitic attack,” Los Angeles Mayor Eric Garcetti tweeted Wednesday, announcing that the Los Angeles Police Department (LAPD) “is investigating this assault as a hate crime, and we will respond with the full force of the law.”

“Jewish Angelenos, like all residents, should always feel safe in our city,” the mayor wrote. “There is simply no place for anti-Semitism, discrimination, or prejudice of any kind in Los Angeles. And we will never tolerate bigotry and violence in our communities.”

L.A. City Councilman Paul Koretz, who is Jewish, was sent the video and later visited the restaurant.

“It’s absolutely outrageous. We’re not going to allow this in the city,” he told KTLA. “We’re not going to bring the conflict from the Middle East here and allow people to be attacked on our streets because of what they look like and what they appear ethnically.”

The Council on American-Islamic Relations for Greater Los Angeles condemned the incident.

“As a civil rights and advocacy organization, we support everyone’s right to free speech, the right to assemble and rally in support of their respective political views,” Executive Director Hussam Ayloush said in a statement. “However, despite heightened tensions in Palestine and Israel, it is never acceptable for that conflict to spill over into our streets and cities. Violence and intimidation should be condemned, investigated, and if warranted, prosecuted.”

In announcing the $5,000 reward, Jeffrey I. Abrams, the Los Angeles regional director of the Anti-Defamation League, thanked the LAPD for investigating the incident as a potential hate crime.

“We are outraged over reports of this anti-Semitic assault,” Abrams said. “These acts of hate have no place in our community and we hope this reward will bring about information that will lead to an arrest or arrests and the prosecution of these hate crimes to the fullest extent of the law.”

Anyone with information about this incident is asked to contact the Los Angeles Police Department at 213-473-0476.

Separately, the LAPD is investigating another incident after security camera footage appeared to show an Orthodox Jewish man on Monday being chased through a parking lot near Rosewood and La Brea avenues by a group of people waving Palestinian flags. The man, who objected to having his face shown on camera to avoid future attacks, told KCBS-TV he escaped and was not hurt.

Over the weekend, thousands of protesters gathered in West Los Angeles in support of Palestinians. There was also a demonstration outside the Israeli consulate earlier Tuesday. Organizers said both events remained peaceful, according to the Associated Press.