Moscow: Russian troops have landed in Kazakhstan after the central Asian country’s President asked for help to quell sweeping anti-government protests – a major test of a Moscow-led military alliance as the Kremlin deepened its role in the crisis.

“Dozens” of demonstrators were killed, a Kazakh official said, as local security forces tried to put down protests that began with outrage over a fuel price hike but have grown into a challenge to a political system largely unchanged since the end of the Soviet Union three decades ago. 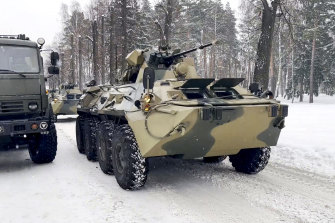 Twelve police officers died in an eruption of violence that saw demonstrators storm government buildings and set them on fire, authorities said on Friday AEDT.

One police officer was found beheaded in the unrest, which poses a growing challenge to authoritarian rule in the former Soviet republic.

“Dozens of attackers have been eliminated, their identities are being established,” said spokeswoman Saltanat Azirbek, according to Russian news agency Interfax. Police have detained about 2,000 people in Almaty, the Interior Ministry said.

Despite the severe response by authorities, protesters took to the streets again Thursday in the country’s largest city, Almaty, a day after breaking into the presidential residence and the mayor’s office there.

Police were also out in force, including in the capital of Nur-Sultan, which was reported quiet, and a Russian-led force of peacekeeping troops was on its way.

Video from the Russian news agency Tass showed police firing intensely on a street near Republic Square, where demonstrators had gathered, though they could not be seen in the footage. Late Thursday, Tass said protesters had been swept from the square but that sporadic gunfire in the area continued.

Earlier, Russia’s Sputnik news service reported that shots were fired as police surrounded a group of about 200 protesters in the city.

It is the first time the Collective Security Treaty Organisation, founded after the dissolution of the Soviet Union and composed of six former members, has agreed to deploy “peacekeepers” to aid a member country. Although the bloc has long been seen as Russia’s answer to NATO, its first joint action is ending a domestic protest rather than combating an attack from an external force.

The stakes are especially high for Russia, effectively the leader of the alliance, as its presence risks alienating a public demanding a change in Kazakhstan’s regime but has yet to show any anti-Russian sentiment.

The sphere of influence

The unrest also comes at a fraught time for the Kremlin, amid a troop buildup near the Ukraine border and ahead of negotiations next week with the United States about guarantees Russia has demanded from NATO that it not expand or cooperate with ex-Soviet countries.

The tensions, now both at Russia’s southwestern border and its southeastern one, underscore the challenges for Moscow in maintaining what it considers its sphere of influence: Ukraine, Belarus, Moldova, central Asia and the Caucasus countries of Armenia, Azerbaijan and Georgia – all former members of the Soviet Union.

“If you have great power ambitions, please show what you can do on several fronts. Many others failed to that,” Alexander Baunov of the Carnegie Moscow Centre said on Twitter.

“Kazakhstan will test Russia’s actual capabilities. It will be both distracting and sobering,” he added.

The demonstrations began over the weekend in Kazakhstan’s oil-rich western region over high energy prices and then spread elsewhere, including Almaty, the country’s largest city. Protesters on Wednesday set city halls across the country ablaze and briefly took over the Almaty airport. Part of their anger appeared to be aimed at Nursultan Nazarbayev, the country’s authoritarian former president, who continues to exert significant power behind the scenes under the official title of “father of the nation”.

There have been multiple reports of gunfire around the city throughout the day, and on Thursday evening (Friday AEDT) the Almaty police department reported more “terrorists” were killed outside the Almalinksy district police station.

At least eight law enforcement officers have been killed, according to the Interior Ministry. More than 1,000 people have been injured in the protests, the Health Ministry said Thursday, 400 of whom have been hospitalised, with 62 in intensive care.

Kazakhstan’s Internet was blacked out Thursday, and national banking services reportedly were suspended.

On Wednesday evening, Belarusian President Alexander Lukashenko’s office announced that he spoke by phone with Putin and afterward Kazakh President Kassym-Jomart Tokayev. Hours later, Tokayev appealed for support from the CSTO and claimed that “foreign-trained terrorist gangs were seizing buildings, infrastructure and weapons”. He did not offer evidence or specify which countries were behind the purported plot.

“He justified the invitation of the CSTO forces to maintain stability because as it turned out – suddenly, within a few hours – as he said, ‘international terrorist groups have emerged,’ which threaten the country and that is in fact the external aggression,” said Arkady Dubnov, a political analyst and expert on central Asia.

“It is a very awkward attempt to explain this threat in a very clumsy way so that it complies with the condition of the treaty that outlines the possibility of an intervention if one of the parties is under threat,” Dubnov added. 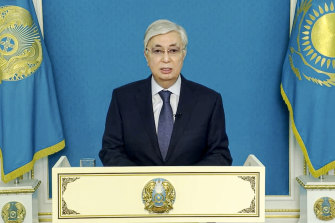 By citing the presence of terrorists, Kazakh President assym-Jomart Tokayev could imply foreign forces were involved and invoke the treaty to allow ex-Soviet allies to enter the country. Credit:Kazakhstan’s Presidential Press Service

Armenian Prime Minister Nikol Pashinyan, who chairs a council within the military alliance, announced on Facebook that an unspecified number of troops would be sent to the central Asian nation “for a limited time period” to “stabilise and resolve the situation.”

The alliance said forces from Russia, Belarus, Armenia, Tajikistan and Kyrgyzstan would be deployed to Kazakhstan, with the primary goal of protecting state and military facilities. Moscow also sent paratroopers, the organisation said.

What Russia wants in exchange

Kremlin propagandist Margarita Simonyan, the editor in chief of the government-funded TV channel RT (formerly Russia Today), suggested on Twitter that in exchange for Russia’s help, Kazakhstan’s government should make several concessions, including recognising annexed Crimea as Russian territory and returning the Cyrillic alphabet. (Nazarbayev in 2017 ordered the official script of the Kazakh language to be switched from the Cyrillic to Latin alphabet.) 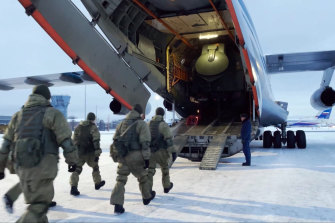 It’s not clear that Tokayev made any promises to Putin in exchange for Russian military support. In an effort to appease protesters, Tokayev quickly restored price caps on liquefied petroleum gas like propane, which powers most vehicles in the country’s west. He also removed Nazarbayev as head of the powerful National Security Council and declared a two-week state of emergency for the entire country.

Nazarbayev, who ruled for nearly three decades before stepping down in 2019, has not been seen or heard from this week. On Wednesday, a statue of Nazarbayev in Taldykorgan, near Almaty, was pulled down and demolished by protesters. At rallies across the nation, people chanted: “Old man, go away!”

“Grievances have been accumulating over years, and with Nazarbayev’s resignation in 2019, people felt the promise of change and started pushing for change in various ways,” said Nargis Kassenova, a central Asia expert at Harvard University, adding that there were references to a “Kazakh Spring.” 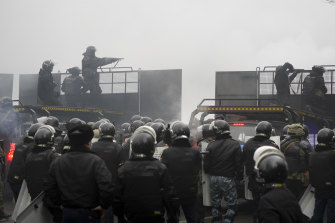 Riot police blocked a street during the riots on Thursday. Credit:AP

How the demonstrations “are and will be perceived by the political elites . . . will define the trajectory” for Nazarbayev, who remains “central for the system,” Kassenova said.

Kazakhstan is central Asia’s wealthiest and, with 19 million people, its second-most-populous country, and the widespread unrest – along with the entrance of Russian-linked forces – stirred concerns in regional capitals and Washington.

US State Department spokesman Ned Price called on all parties to resolve the situation peacefully.

“We condemn the acts of violence and destruction of property and call for restraint by both the authorities and protesters,” he said in a statement. “We ask for all Kazakhstanis to respect and defend constitutional institutions, human rights, and media freedom, including through the restoration of Internet service.”

Kazakhstan hosts the Baikonur Cosmodrome, a rocket launch complex leased to Russia. About a fifth of Kazakhstan’s population are ethnic Russians and Moscow has in the past deployed “peacekeepers” to countries that President Vladimir Putin fears are slipping out of his political orbit. Leaders in Georgia, Moldova and Ukraine have previously complained that such troops prop up pro-Russian separatist forces.

Deploying forces, even a relatively small contingent, to Kazakhstan now is particularly tricky for Moscow. Russia has massed more than 100,000 troops near the Ukraine border, according to US and Ukrainian officials, in what American intelligence has found could be plans for a multi-pronged, fresh invasion into Ukraine as soon as this month. 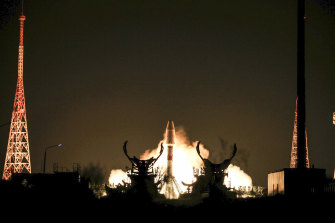 Russian military units that had been deployed in Siberia and the Ural Mountains, near Kazakhstan, were “almost completely” moved to positions near Ukraine and Belarus, according to Rob Lee, a Russian military expert and fellow at the Foreign Policy Research Institute.

“Russia still has plenty of units that it can deploy if necessary, but you wouldn’t want to start a conflict with Ukraine right now while the situation in Kazakhstan is so uncertain,” Lee said on Twitter. “Wars are inherently unpredictable, and Russia’s situation just became more complex.”

'Very Happy Boy,' 7, Was Killed with Stray Bullet While Playing in His Room in Georgia