Paris:  Protesters throughout Europe have taken to the streets again as disaffected voters vent their anger with what they see as out-of-touch governments.

Several thousand people wearing yellow vests have gathered at locations across France for the 10th consecutive weekend of anti-government protests. 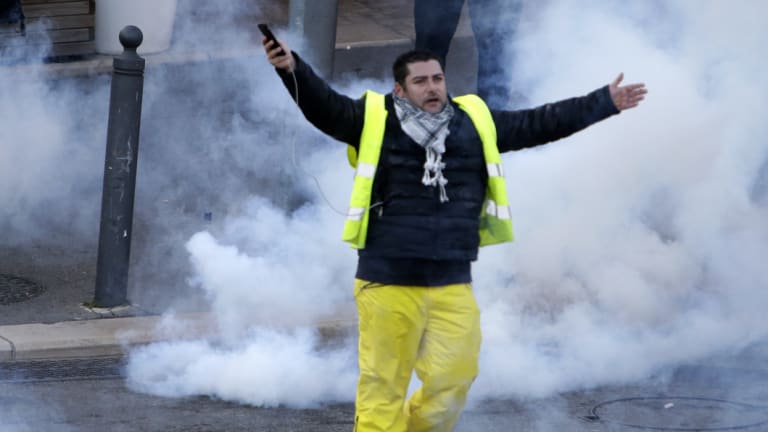 A yellow vest demonstrator gestures through tear gas during a protest on Saturday in Marseille, southern France. Credit:AP

Protesters in Paris, Bordeaux and Toulouse clashed with police, with security forces responding to projectiles with tear gas and water canons, footage broadcast by BFMTV showed.

In Serbia, more than 10,000 people marched through Belgrade on Saturday evening to protest against the rule of President Aleksandar Vucic and his Serbian Progressive Party (SNS), demanding media freedom as a precondition for free and fair elections.

Protesters brought together by the Alliance for Serbia, a loose grouping of 30 opposition parties and organisations, wore badges reading "It has started" and chanted "Vucic thief" in the eighth straight weekly protest by the grouping. Previous rallies have attracted similar-sized crowds.

"The only demand we have is that this evil [regime] goes away," said Branisalv Trifunovic, an actor who addressed the crowd as he had done in previous weeks. "We want elections, but freedom must come first." 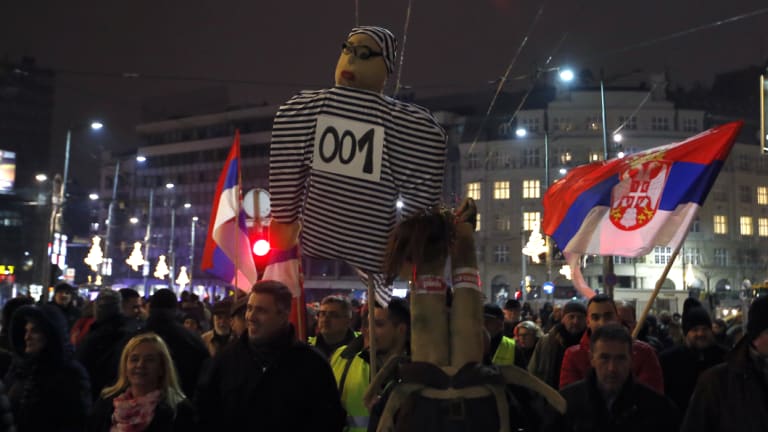 People hold a effigy representing Serbian President Aleksandar Vucic dressed as a prisoner, during a protest in Belgrade, Serbia, on Saturday.Credit:AP

Vucic has previously said he would not bow to opposition demands for electoral reform and increased media freedom "even if there were 5 million people in the street", but said he was willing to test his party's popularity in a snap vote.

The latest protest follows a visit to Belgrade on Thursday by Russian President Vladimir Putin, welcomed by tens of thousands of people bussed in from all over Serbia.

"I came here to express my dissatisfaction with the ruling elite," said Ljiljana Zivanovic, a 64-year old pensioner. "They [SNS and Vucic] control all media, I am sick of all the corruption going on."

The protests have spread to other cities in Serbia and on Friday were held in Novi Sad, the second-largest city, the southern city of Nis and several other towns, though numbers outside the capital remain small.

Meanwhile, dozens of anti-government protests have taken place in Hungary to protest labour law changes that sharply increased the overtime hours that employers can request from workers. 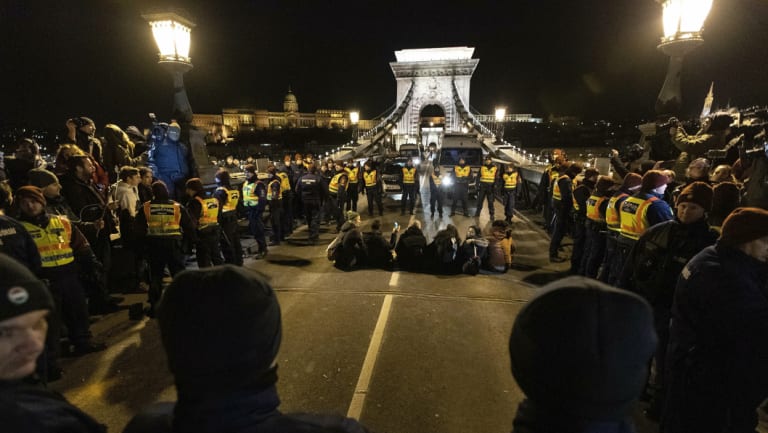 Police confront the crowd on the Chain Bridge during a protest against labour laws in Budapest, Hungary, on Saturday.Credit:AP

Saturday's rallies drew mostly hundreds of people to each event. The labour law changes were approved in December by lawmakers from Prime Minister Viktor Orban's Fidesz party, and also include other measures seen as detrimental to employees.

The new legislation is called the "slave law" by government opponents, who also cite government corruption and Orban's attacks on the press and academic freedom among their reasons for holding the rallies and roadblocks.

Government spokesman Istvan Hollik said the labour code changes were just an excuse for the protests, which he called part of the opposition's campaign ahead of the European Parliament elections in May.

The latest round of French protests had attracted around 27,000 people across the country by early Saturday afternoon, 7000 of them in the capital Paris, according to the Interior Ministry.

Last Saturday, 84,000 people took part over the course of the whole day across France, an increase of more than 30,000 compared to the previous weekend.

In Paris on Saturday, people gathered at Les Invalides square near the Eiffel Tower and planned to march through the capital.

Security was high again after protesters and police clashed repeatedly in previous weeks.

Authorities said 80,000 members of the security forces were deployed nationwide, 5000 of them in Paris.

The Yellow Vest movement, as it has become known, grew out of opposition to fuel taxes and the rising cost of living.

A package of social welfare measures presented by embattled President Emmanuel Macron in mid-December failed to placate his critics.

The rallies have since broadened into protests against his centre-right government and its reformist policies.

Devastated mum of boy, 13, who died after violent ecstasy reaction says she visits his grave to play his favourite music – The Sun