A DAD has been found guilty of mowing down two men he believed had been selling drugs to his son and rounding up a masked vigilante posse to tackle them.

Furious Craig Topen, 42, smashed his one and a half tonne Land Rover Freelander through a fence and into one of the men as he tried to escape. 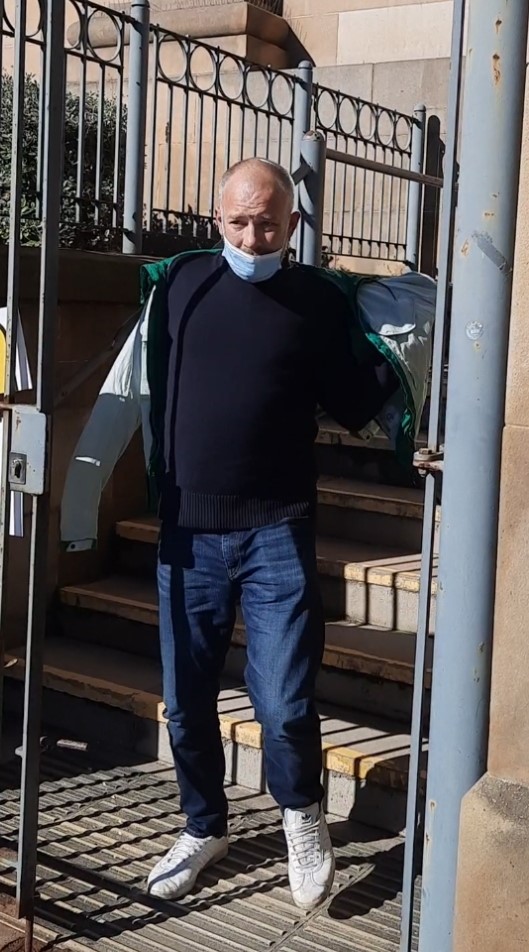 He then crashed into a second man before getting out of the car and punching and kicking the third man before whacking him with a golf club.

Topen, from Dundee, Scotland, who runs a joinery company, admitted carrying out the vigilante attack which left Ilian Iliev severely injured and scarred for life.

Dundee Sheriff Court heard that Topen led a masked gang to the home of Iliev's friend as he was aware he had been the cause of his son's drug-related debts.

Fiscal depute Stewart Duncan told the court: "Mr McCluskey and his stepson Mr Cuthbert were in their home address with Mr Iliev and other males.

"A brick came through the window. They saw several males outside, shouting. Liam Cuthbert recognised one as Craig Topen. Kenneth McCluskey exited to confront the group.

"The group got into the Land Rover Freelander, with the accused getting in the driver's seat. The two men were in front of a fence and the car was driven straight at both.

"Mr Cuthbert tried to move out the way but the car struck his leg, causing him to spin round and fall to the ground. Mr McCluskey tried to escape by jumping over the fence.

"The car mounted the pavement, struck him on the back and leg as he climbed over, and knocked the fence over, causing him to fall into the garden.

"The group managed to catch Mr Iliev and the accused repeatedly struck his head and body with a golf club. He had three wounds to the scalp and needed ten stitches."

Topen admitted acting with others and, with their faces masked, attacking Kenneth McCluskey, Liam Cuthbert and Iliev in Craigmount Road, Dundee, on 15 November 2019.

He admitted mounting the pavement and driving at them before striking them with the vehicle, then getting out and attacking Iliev with a golf club.

He also admitted having an offensive weapon, namely the golf club.

Solicitor Ross Donnelly, defending, said: "The background is that one of his children had been involved in drug misuse and had been receiving threatening messages and phone calls as a result of a drug debt owed to Kenneth McCluskey.

"Mr Topen went to see if some 'agreement' could be reached. He earns a fairly good income as he owns a joinery firm."

Sheriff Alistair Carmichael deferred sentence on Topen for reports and he was granted bail.

Parts of France ‘unliveable’ due to migrants says Brazil’s president

Who is Lisa Montgomery, the only woman on death row in the US?