A Range Rover driver defiantly sat on her car bonnet as she tried to stop a tow truck taking it in a bizarre standoff caught on camera.

The motorist in Ilford, East London, thought she would sit on the Range Rover in a desperate bid to stop it being taken.

The footage was captured on Tuesday and shows a glum young woman sat defiantly on her vehicle’s hood.

Police are on the scene and the young female’s car is up on a flatbed truck as an amused onlooker films the incident.

The man behind the camera says: ‘Man said the Feds try to take car. She’s really not having it bro. No insurance who fam, you’re not taking my whip.’

Whip is slang for car, and clearly the woman is desperate to hold onto hers. Social media users mocked the motorist when the clip surface.

Paul Serifco said: ‘When you love your car so much but can’t afford to pay the insurance and monthly payments.’

Adrian Ritalashley said: ‘How she having a bing Range and no insurance I ain’t got any sympathy for her.’

One person who claimed to witness the incident said: ‘She wasn’t having it even from the police officer, she wasn’t getting off the Range. Saw her on the roads.’ 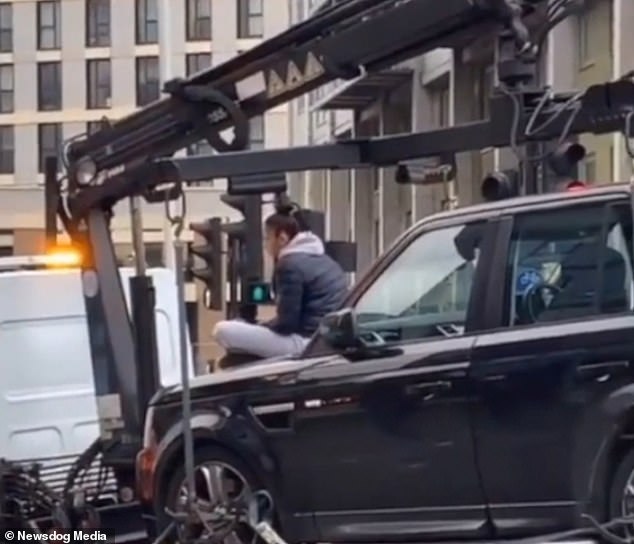 Pictured: The woman defiantly sits on the bonnet of her car in Ilford, East London, as her car is towed away

Man leaves TikTok baffled with very rude X-ray – but can YOU tell what it really is?

Who was Benjamin Phillips?