They have been feted as frontline COVID heroes – the retail workers who have risked exposure to the virus daily while dealing with panic buying and customer abuse over mask-wearing and QR code check-ins.

But the tough reality of life for tens of thousands of essential but low-paid workers has been laid bare in the first study examining the challenges they face juggling often irregular work hours and care of family members. 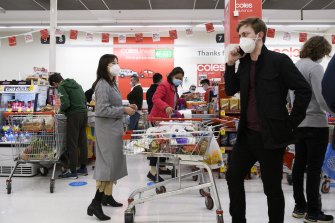 Supermarket staff have had to ensure customers are wearing masks and have also borne the brunt of several rounds of panic buying, as seen here in Sydney in June.Credit:Rhett Wyman

“As a result of employment precarity, unpredictable hours and poor support for workers’ unpaid care responsibilities, many families find managing work and care particularly difficult,” the report by the Social Policy Research Centre at the University of NSW says.

The report was commissioned by the Shop, Distributive and Allied Employees Association – the national union for workers in retail, fast food and warehousing. The union surveyed 6469 of its members.

Forty-one percent said their shifts could change unexpectedly, which made life particularly difficult for parents and carers.

Employees also reported having very limited ability to control their working times. Only 19 per cent said they could easily adjust their start and finish times, whereas 60 per cent said this was not the case. 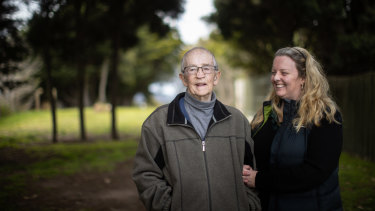 Myra says an extra day carer’s leave a month would help her look after her father Harry, who has dementia.Credit:Simon Schluter

Myra, a 48-year-old full-time office manager at a supermarket in Melbourne, juggles working a 3am to 11.30am shift with caring for her 87-year-old father Harry, who has dementia and heart problems.

She said taking her father to multiple medical appointments meant she only had four hours left of her two weeks’ annual personal leave, which included sick leave and carers’ leave.

“I feel if I had a proper shift with decent hours or a day off a month to look after him and make all the appointments it would make a difference,” she said.

Myra said starting at 3am suited her initially, and she wanted to establish herself as someone who was flexible, but after nearly five months she was at the end of her tether.

“They’re pretty inflexible. I suggested that maybe one person from each department take a turn at that 3am role to let the baker in, as other stores do, but no one else wants to do it.”

Myra said the frontline role of supermarket workers during the pandemic, including policing mask-wearing and QR check ins, was not recognised in their pay and conditions.

“I work 38 hours a week and get roughly $52,000 a year,” she said. “We’ve been put through the slog; the online orders [and] COVID restrictions. I feel we have been pretty poorly treated in all this or forgotten about.”

The retail industry is female-dominated and low-paid, with a higher-than-average percentage of sole parents and carers.

As of May 2021, the average weekly earnings of full-time adults working in retail was $1311, according to the Australian Bureau of Statistics, compared to $1737 across all industries.

Among those with a child aged 12 or under, 62 per cent said they found it stressful to organise childcare around work times.

“You can’t afford to pay a day’s childcare if you’ve got a three-hour shift, or you might be given a longer shift and you can’t arrange childcare at short notice,” said RMIT Professor Sara Charlesworth, who was an advisor to the research team. “Childcare is run in a very rigid way.”

A third of mothers surveyed and 27 per cent of fathers said they would work more hours if they had suitable childcare.

The union called for more accessible and affordable childcare, stable, predictable and secure rosters, an increase in carers’ leave and a summit next year to address the financial and emotional pressure on workers with care responsibilities.

Paul Zahra, the CEO of the Australian Retailers’ Association, which represents the majority of the nation’s largest retailers, said the pandemic showed the critical importance of frontline retail workers and their wellbeing had never been of greater importance.

“The issues outlined in this report are very important and complex, and this report puts a powerful spotlight on improving the working environment for our people, particularly for women and carers,” Mr Zahra said.

He said the association welcomed opportunities to collaborate with the union and governments on the need for more flexible and affordable models of childcare. Ensuring there was a “human filter” on all rostering, greater education on parental-leave entitlements, improved management practices and the inflexibility of the General Retail Award were other issues he identified.

There also needed to be greater education on what it meant to be a casual worker, he said, noting the hours of employment should be neither regular nor consistent.

“Frontline retail work does lend itself to a very flexible working model, and for that reason, there are a large percentage of part-time and casual staff, and a high percentage of women, within the retail workforce,” Mr Zahra said.

“The industry plays an important role in offering young Australians their first job, often when they are still studying, and hence, these workers value the variety and flexibility of hours.”

Man in subway tunnel fatally struck by train in Midtown