At least they’re allowed indoors! Revellers brave rain to hit pubs and bars in Leeds as many enjoy their first night out since easing of Covid rules

Revellers across the country were spotted braving the rain in their hordes in the first week UK lockdown rules were relaxed to allow people inside at pubs and bars.

Pub-goers enjoyed their new freedom by toasting the return of pubs and restaurants as new Covid rules now mean people are allowed to eat and drink inside as well as outside.

Pictures show people flocking to pubs and bars while doing their best to avoid the downpours of rain with some desperately holding pieces of clothing over their heads.

Pubs and bars in England can now open indoor seating areas to welcome back groups of up to six people, or two households.

Drinkers hit the streets in Newcastle, London, Leeds and other cities across the UK to see their friends after months of lockdown.

Gleeful women were spotted dressed to the nines as many enjoyed their first night out since the easing of lockdown rules began in April. 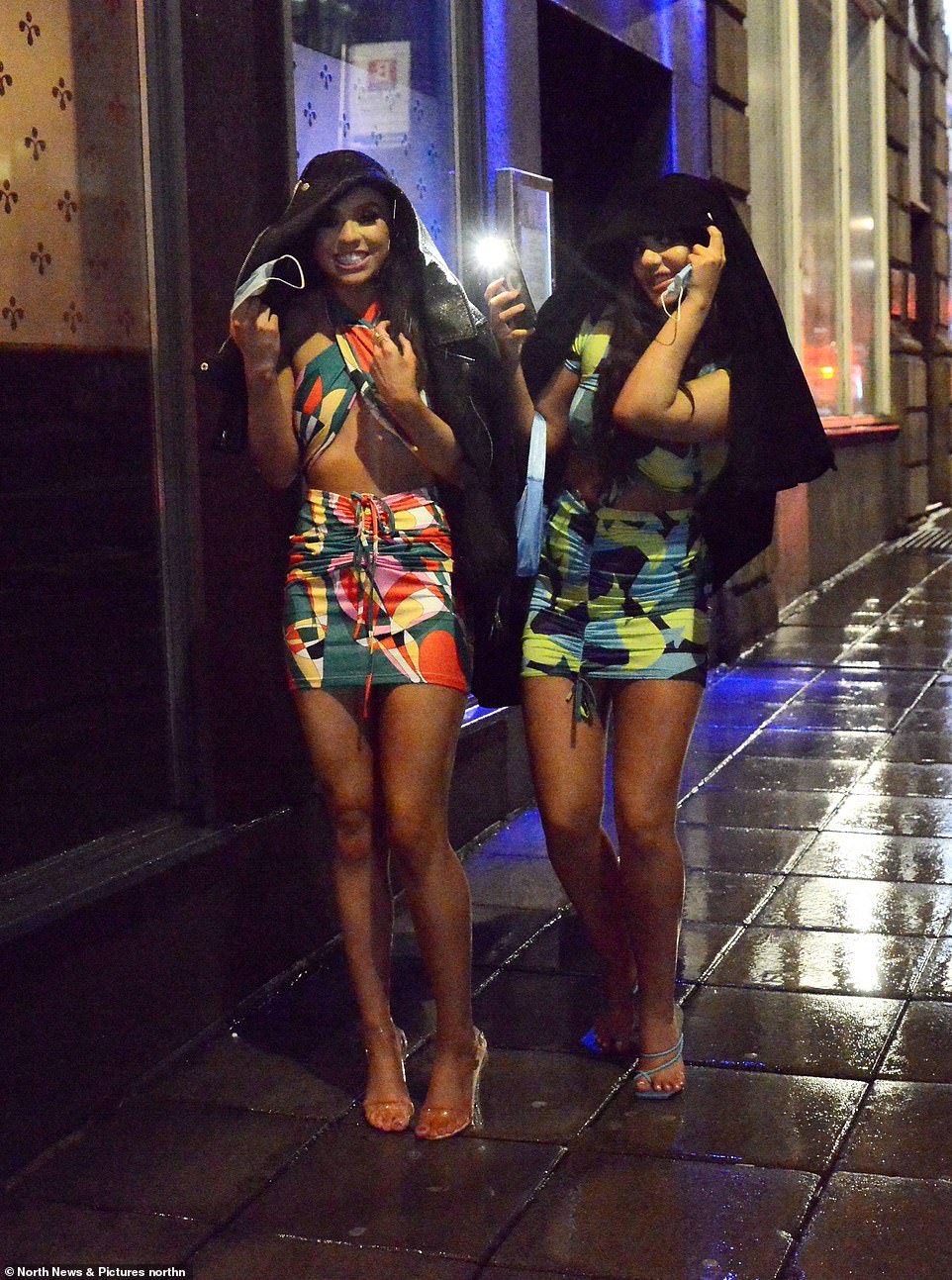 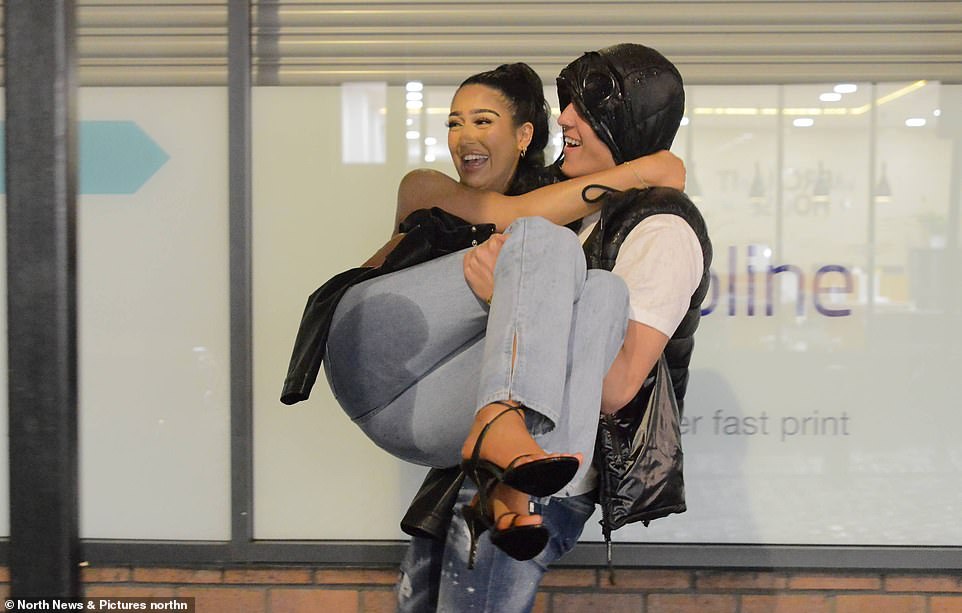 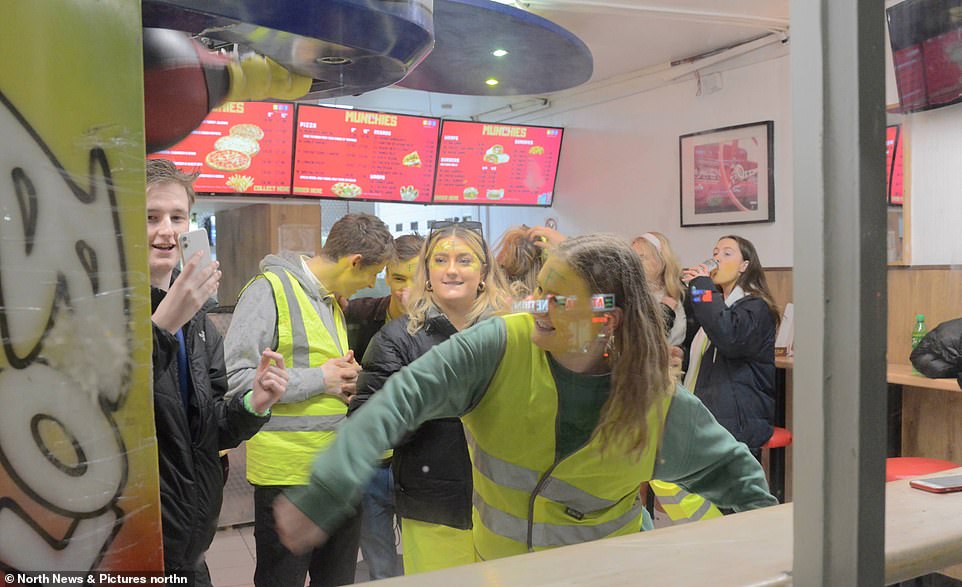 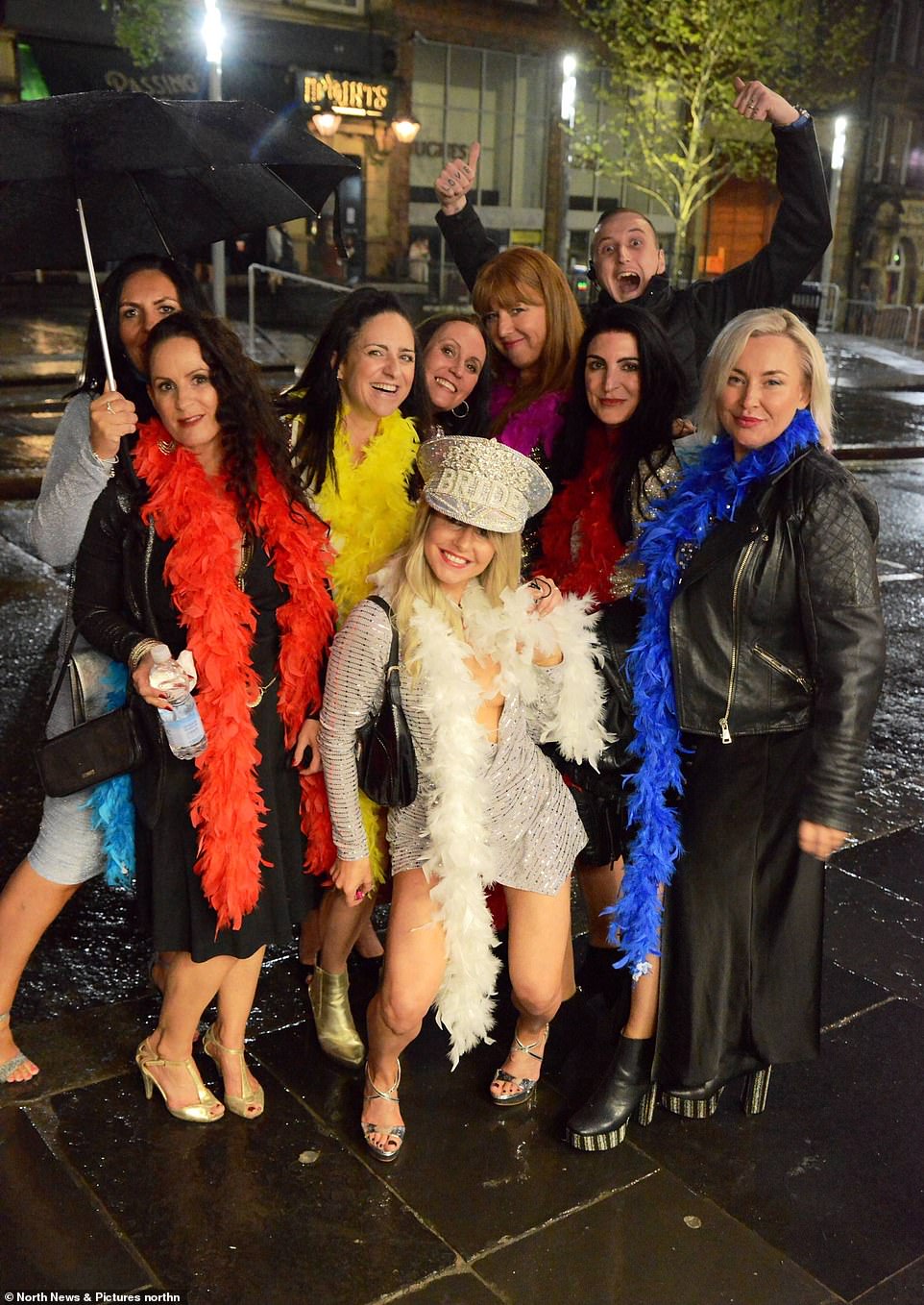 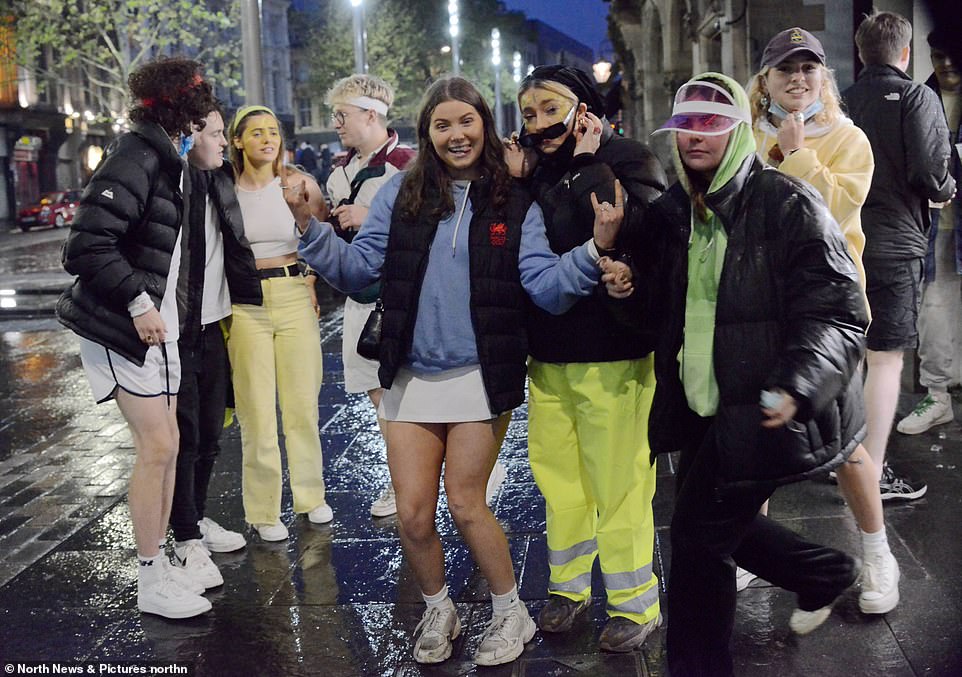 Men were spotted in more casual attire with some getting into the spirit by dressing in yellow high-vis jackets for fun.

Some brought back old-fashioned chivalry and were seen carrying female companions through the lashing rain.

And bar-hoppers weren’t discouraged by the dismal weather as the Met Office issued a yellow weather warning with gusts of up to 60mph expected in Wales and southern England.

More showers are expected to continue today and into the weekend with low temperatures of 5C in the North and Scotland.

Chief Meteorologist Dan Suri said: ‘The low pressure system moving in from the west is going to bring some heavy rain across much of the UK from Thursday and into Friday. With wind looking to be strongest in southern coastal areas, as well as Wales, there’s a chance of some disruption to travel plans and potential damage to temporary structures, such as tents and marquees.’

However sunny spells are due to brighten parts of the country from Tuesday, though they will be interspersed with rain showers. 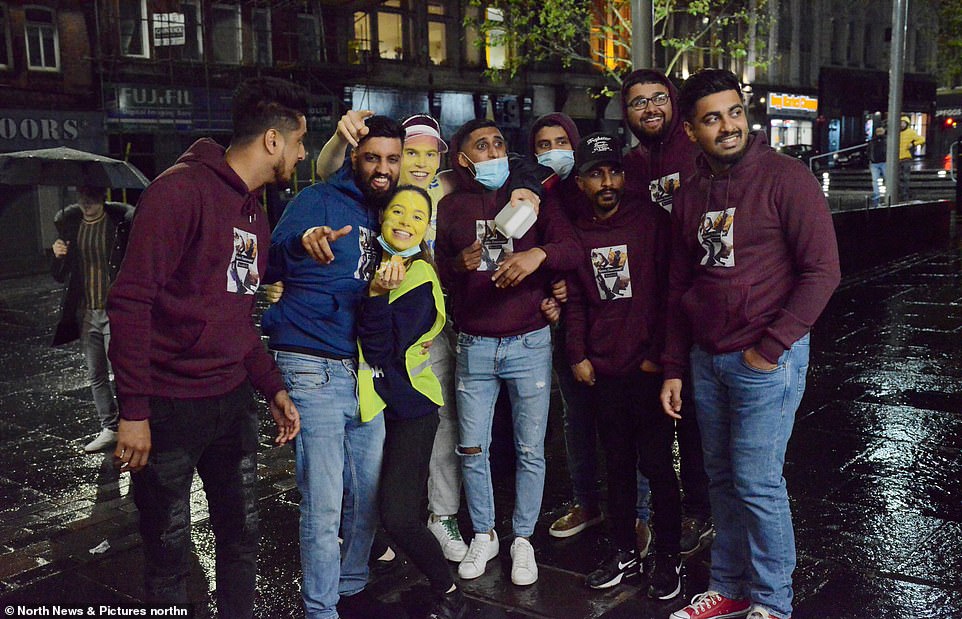 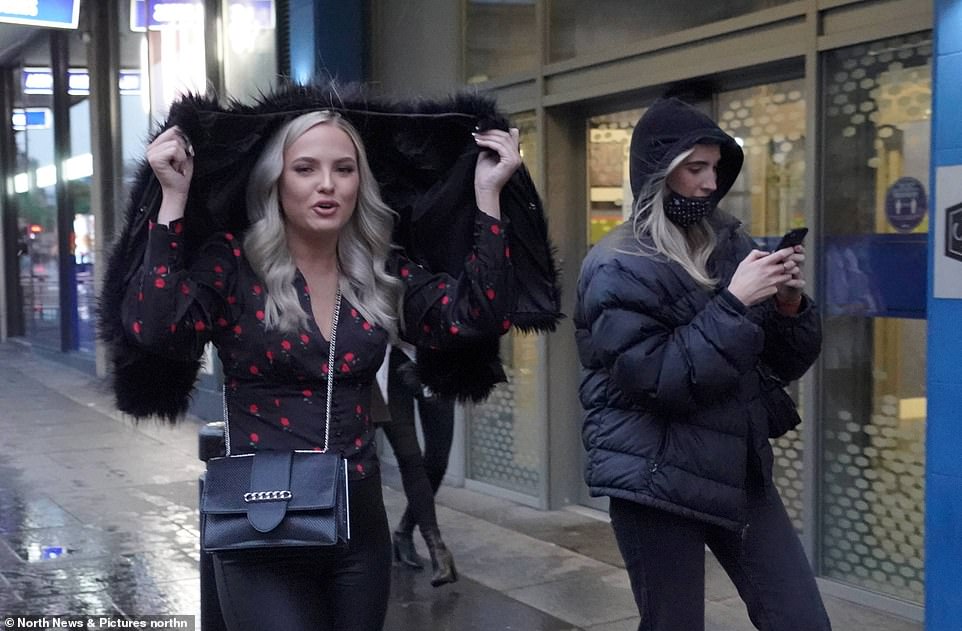 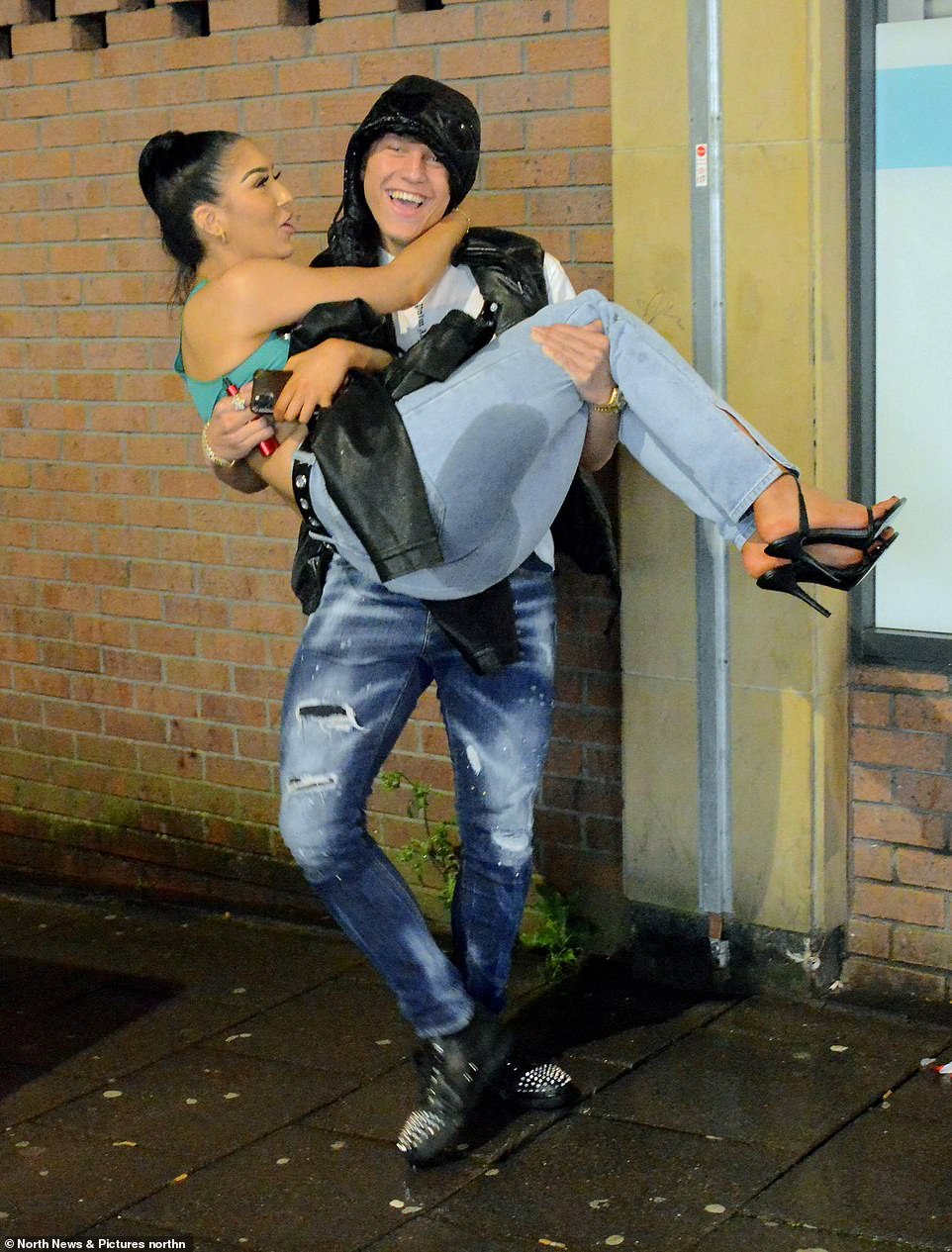 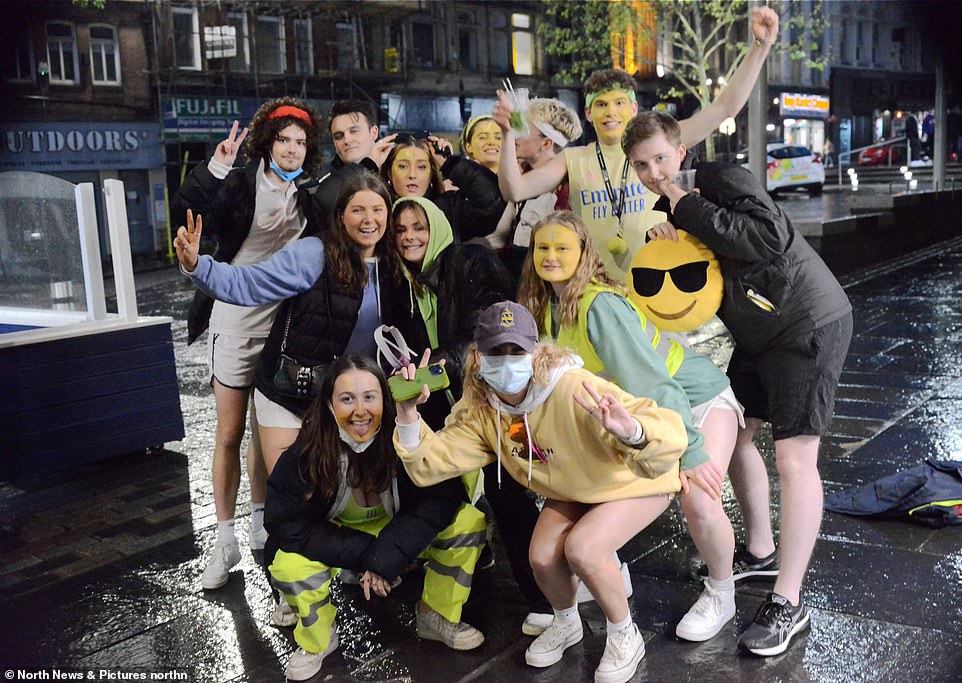 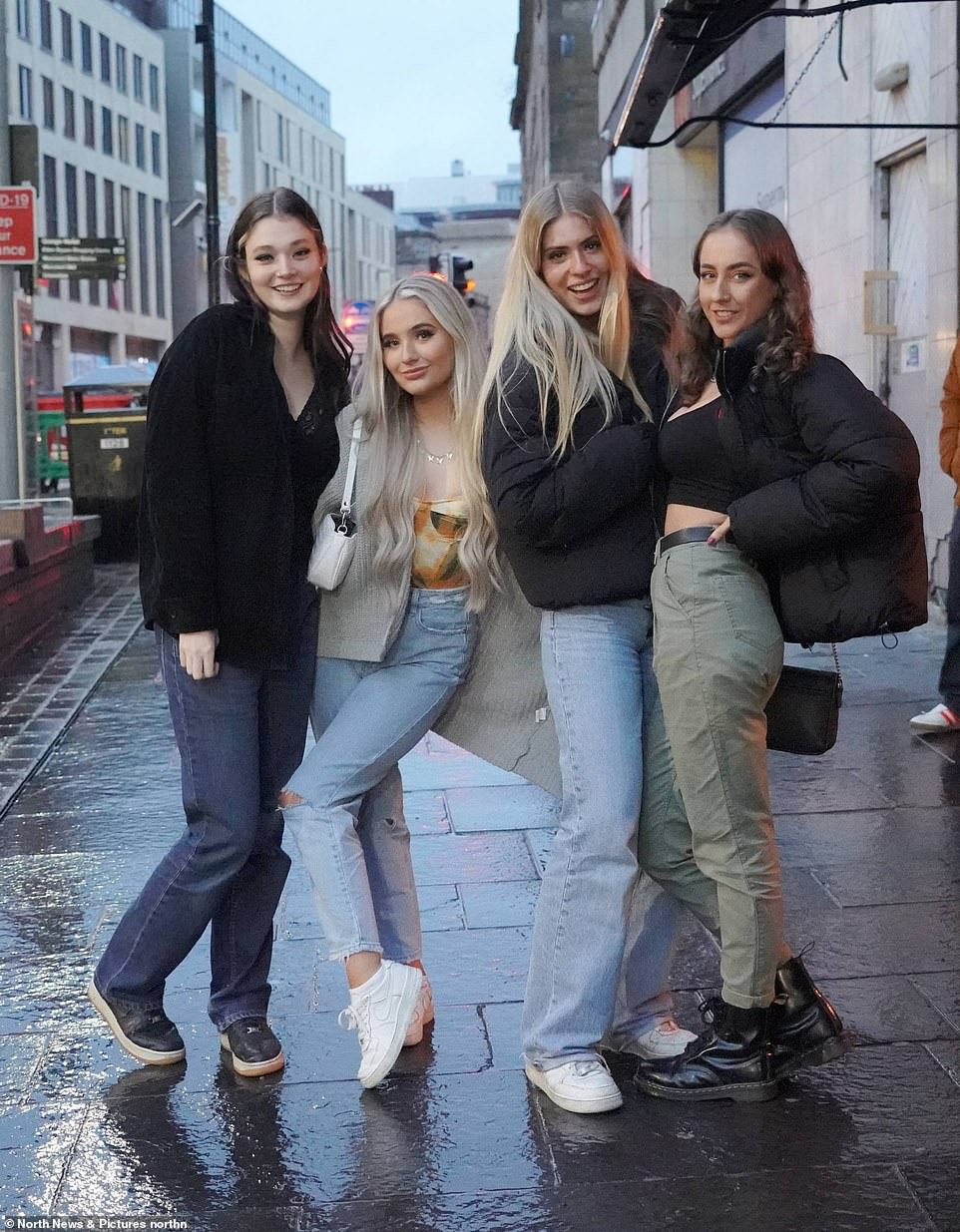 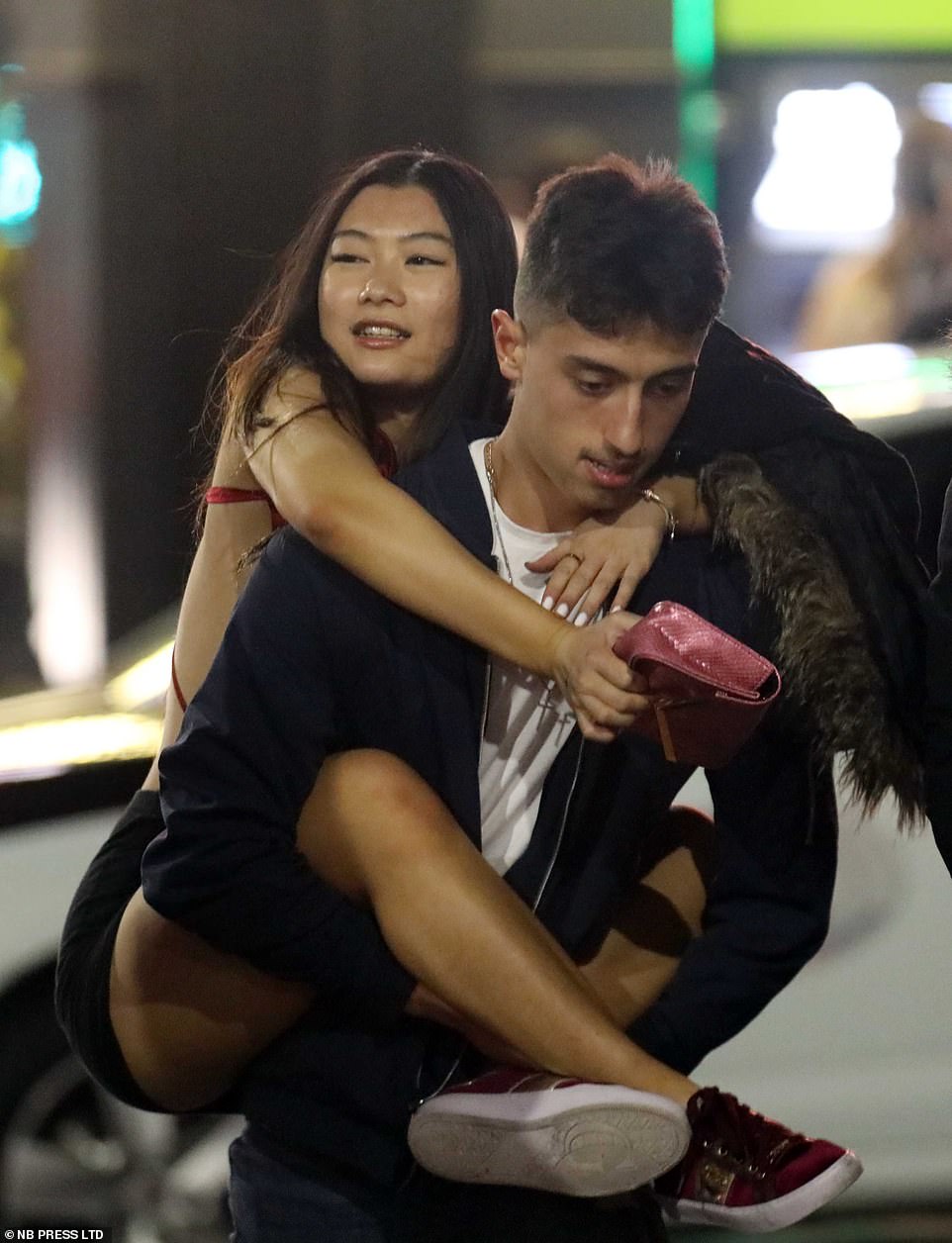 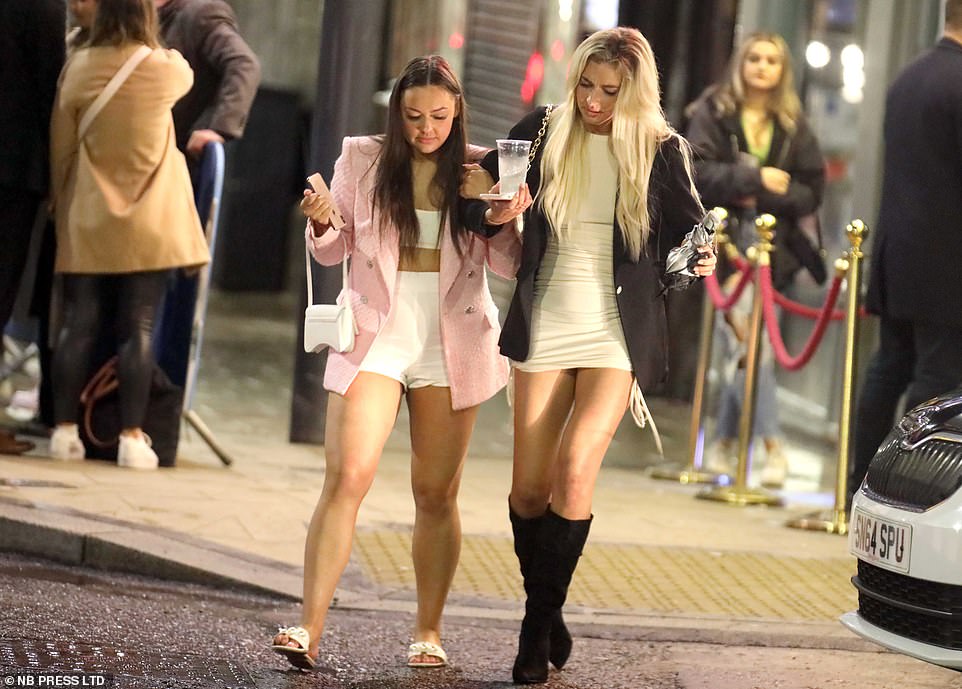 All Covid restrictions are expected to be lifted in June and even nightclubs are due to be reopened.

Meanwhile, the latest figures show Britain’s coronavirus cases are continuing to drop five weeks after lockdown was eased on April 12.

Just seven Covid deaths were recorded yesterday – meaning the daily number of deaths has fallen by more than a third in a week.

Some 2,874 positive testes were recorded and the national case rate has remained stable since April.

Meanwhile, latest data shows another 635,000 Covid vaccine doses were administered on Wednesday, with 265,000 Britons coming forward for their first appointment and 370,000 for their second.

It means 37.2million people have received one injection — the equivalent of more than 70 per cent of all adults — and 21.2m are fully inoculated. 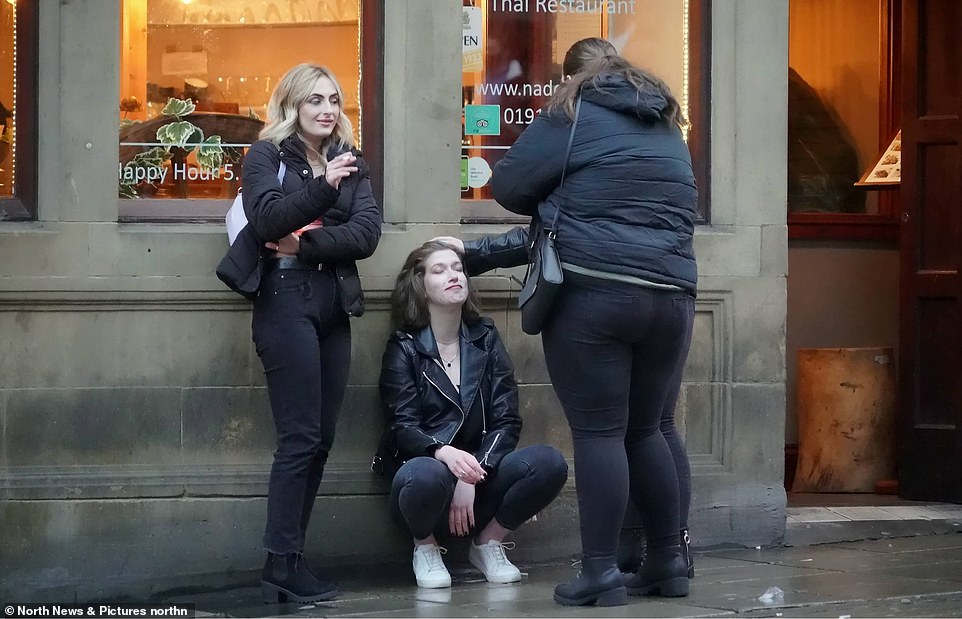 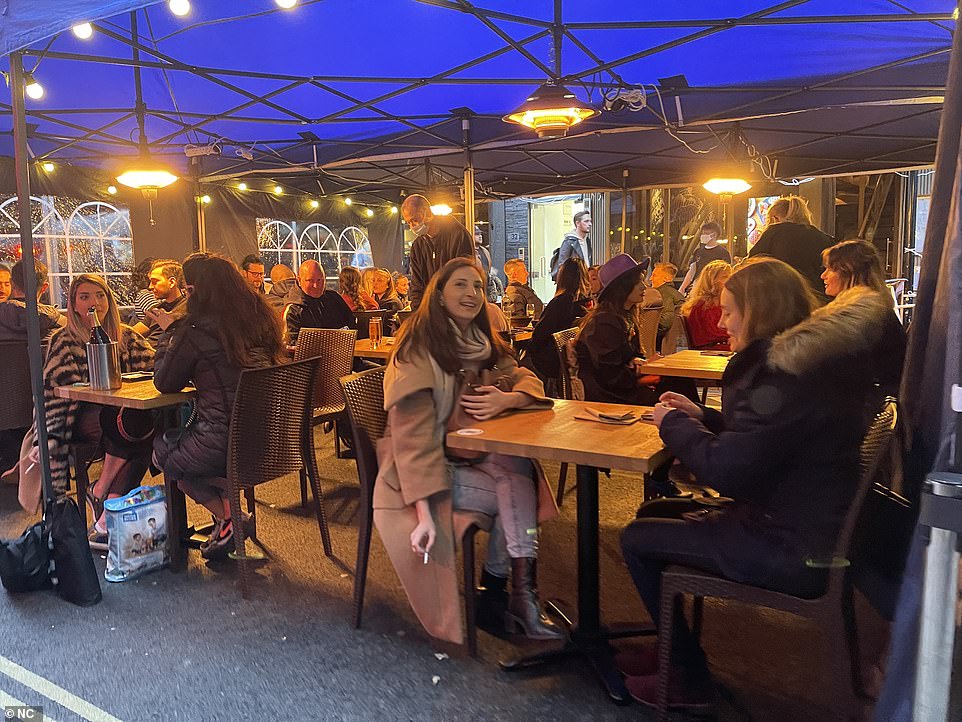 Restaurant-goers enjoy their night under an awning in Soho, central London 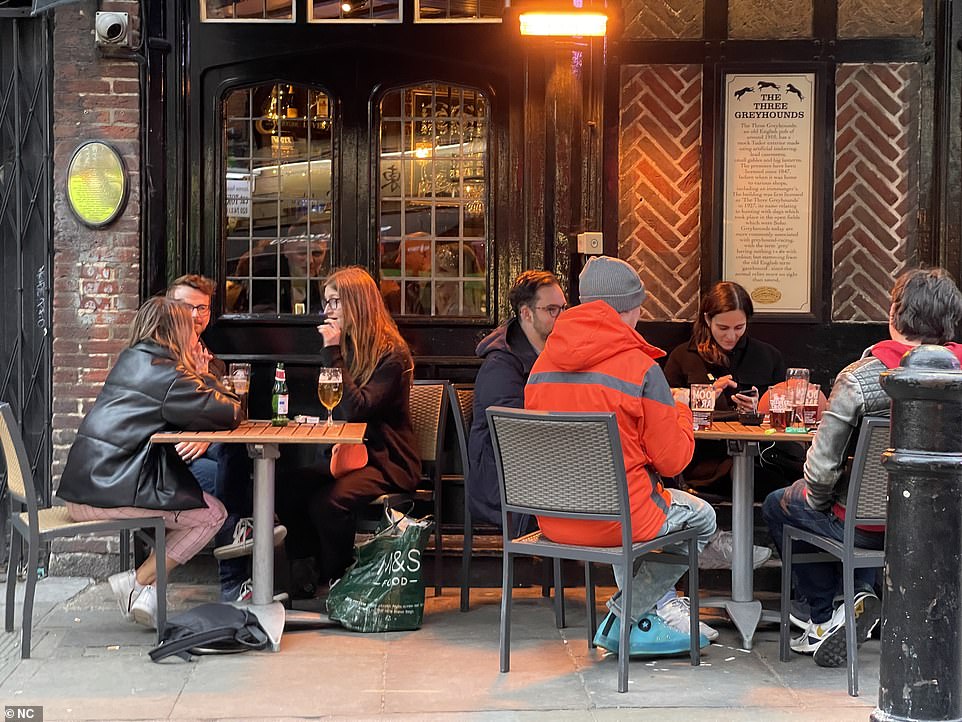 People were spotted eating and drinking in Soho, central London while trying to stay out of the rain 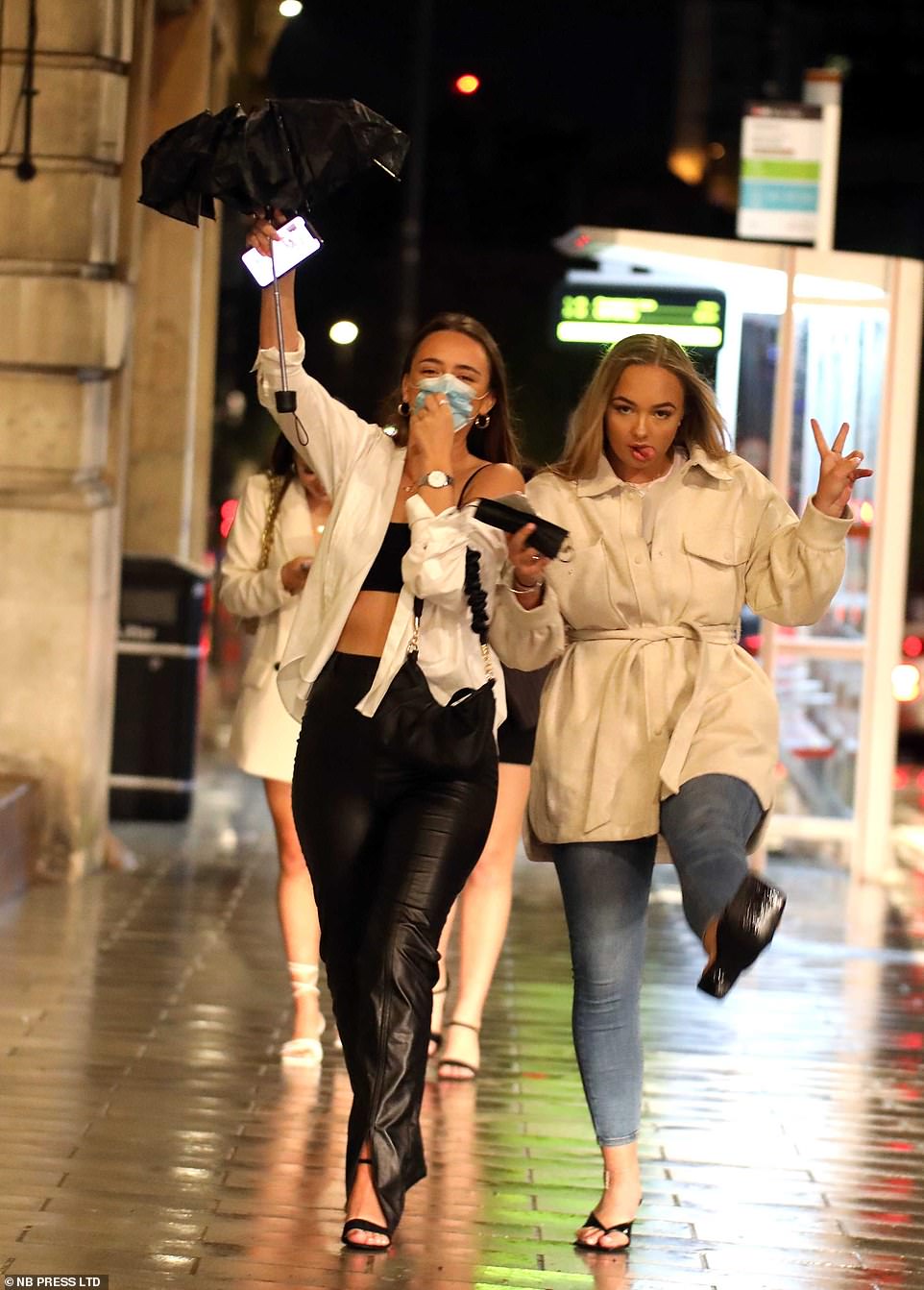 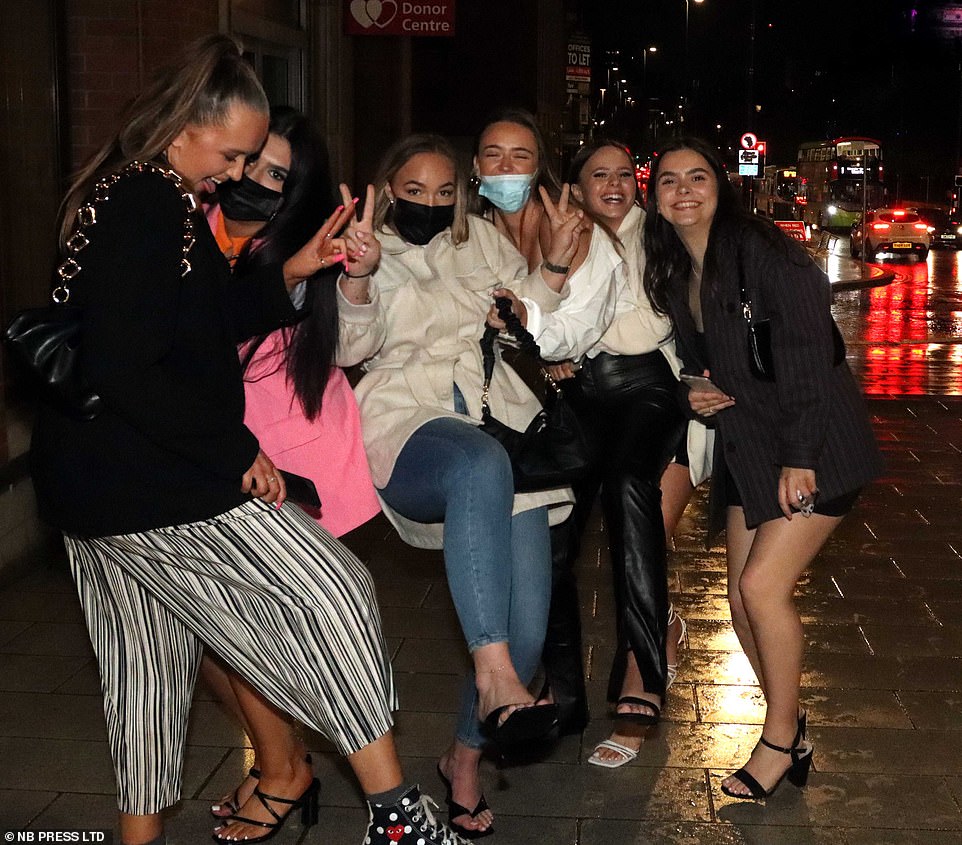 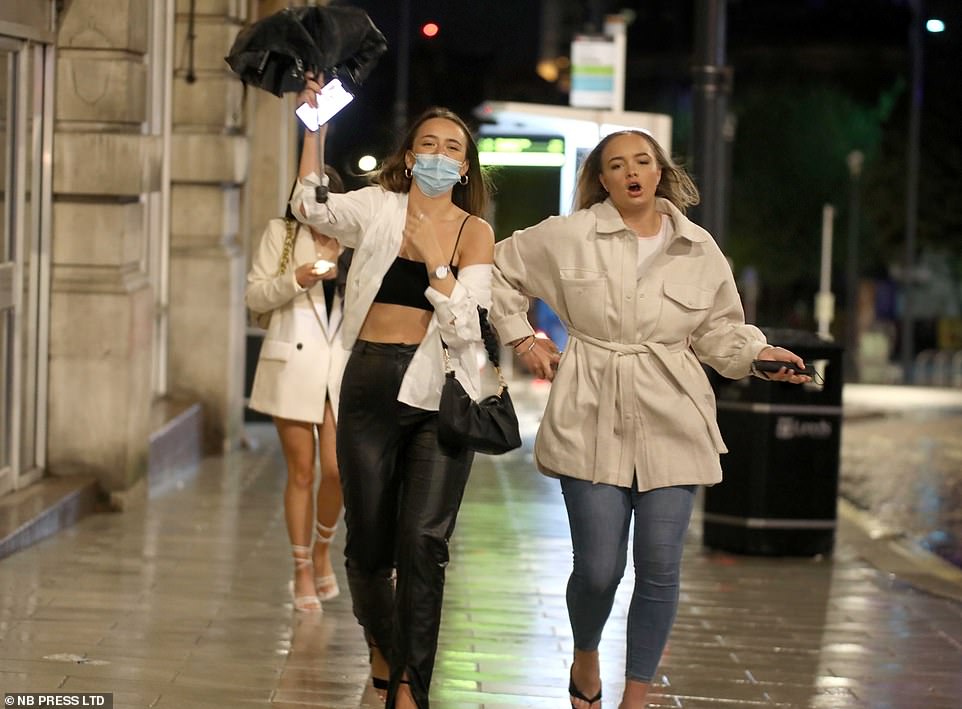 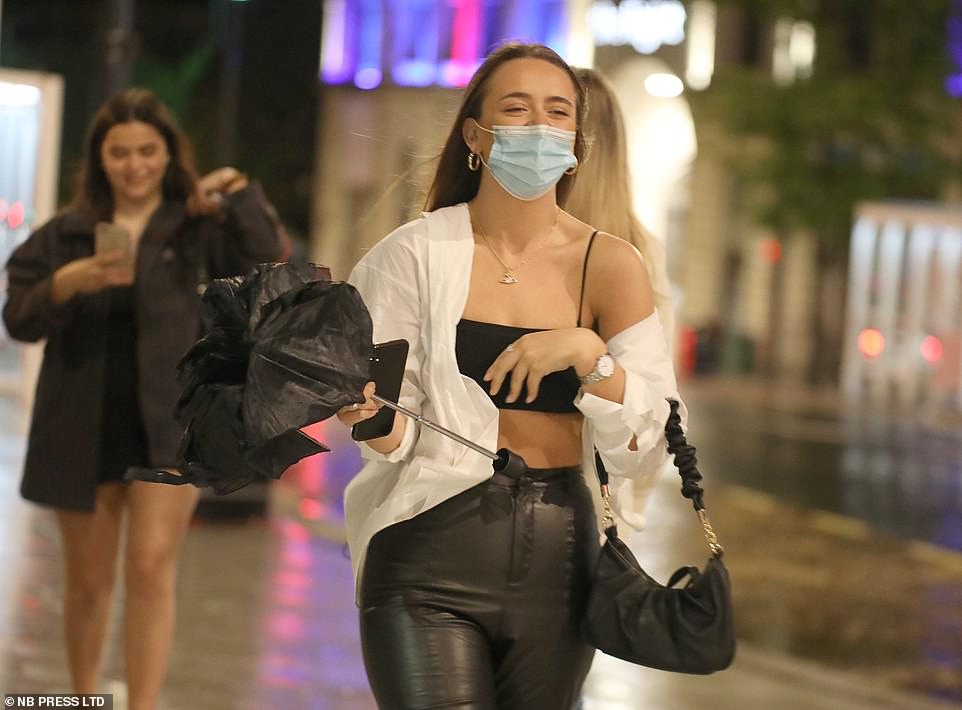 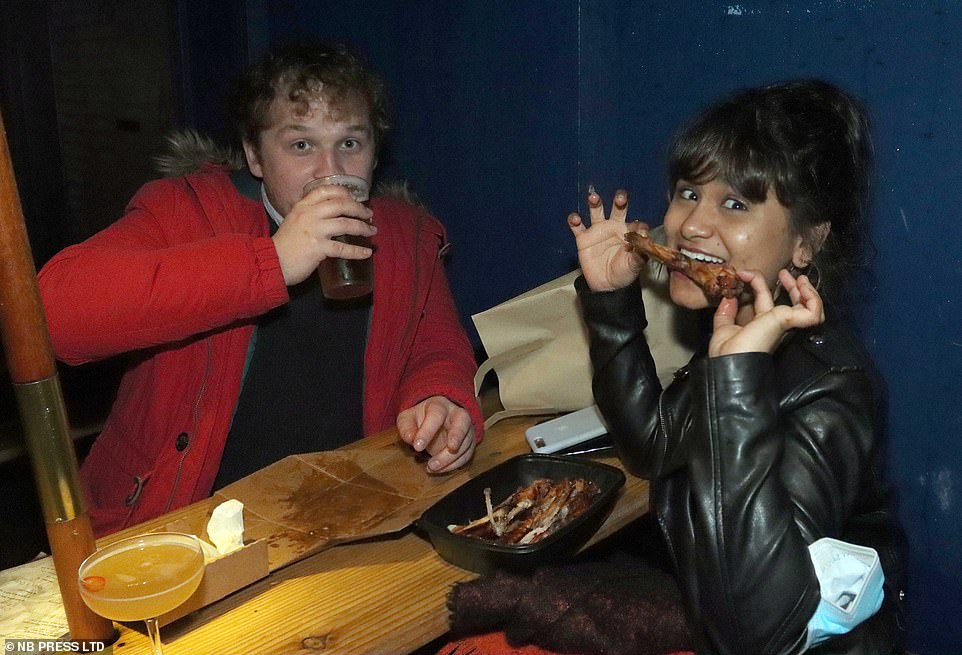 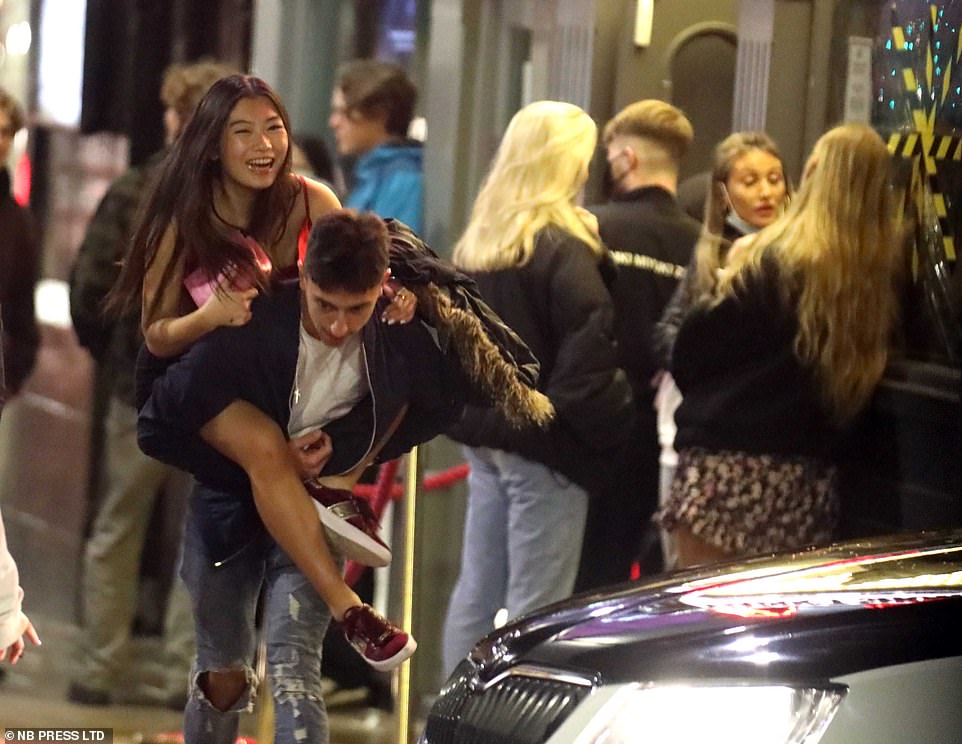 It means Britons have been able to flock to pubs, bars and restaurants and other non-essential retailers after they reopened their doors last month.

There had been fears that the easing in the rules would see a spike in cases and deaths but, so far, this has not happened.

Leading scientists are calling on the Government to remove all coronavirus restrictions and allow people to ‘take back control of their own lives’ when the ‘roadmap’ to freedom ends in June.

With real-world data showing vaccines reduce the risk of death by 98 per cent and hospitalisations by more than 80 per cent, the experts say Covid-19 is being turned into a ‘mild’ disease in Britain, akin to the flu.

In an open letter to The Mail on Sunday, they criticise ‘confused and contradictory’ messages from Ministers and scientific advisers about the virus, which they say are exaggerating the real threat.

One study, presented to the Scientific Advisory Group for Emergencies, found that out of 42,788 people who needed hospital treatment for Covid since December, only 32 were admitted three weeks or more after having their first dose.