For the first time, 50 critically-endangered Baw Baw frogs have been released into the alpine wilds, wearing tiny radio transmitters so scientists can track them.

Fewer than 1000 of the frogs live on the chilly, high-altitude Baw Baw plateau in eastern Victoria, where climate change and the highly-contagious chytrid fungus have taken a heavy toll on their numbers. 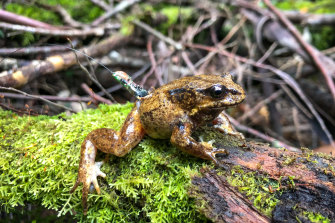 Baw Baw Frogs, wearing radio transmitters, have been released into the wild for the first time.

Zoos Victoria has run a captive breeding program for the past 11 years, which now has a healthy population of about 350 frogs. The zoo has released egg masses at the top of the mountain to try to boost the wild population and halt the slide towards extinction but this is the first release of live frogs.

The program's scientists say the release of adult frogs – 25 females and 25 males – represents a conservation breakthrough and they have been surprised by how far, and fast, the elusive frogs have travelled since they were set free.

“Without our intervention it’s likely the frog would be extinct in the next couple of years,” says the zoo’s threatened species biologist Deon Gilbert.

“This is part of the broader picture of species' recovery and trying to find solutions to some of these big and very tricky problems,” he says. “It’s hugely exciting and it definitely gives me hope for the future.” 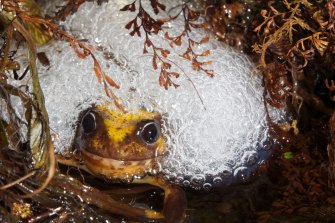 A small piece of rubber is used to tie the radio transmitter onto the frog, in front of the back legs.

It is a non abrasive rubber harness tied on with dissolvable thread. Transmitters will be removed after some tracking, otherwise they will fall off by themselves.

This month two zoo staff on Mount Baw Baw have spent eight to 10 hours a day trying to locate the released frogs using radio trackers, which is time-consuming work. The frogs are usually extremely difficult to find – only fully-grown adult males can be heard when they call.

“We’ve had frogs move a couple of hundred metres away from the release site, which we didn’t expect,” says Mr Gilbert. “They are putting on weight and look really good.”

If this adult release is successful, the zoo may be able to establish wild populations faster than releasing eggs alone, he says.

Today, between one-quarter and one-third of all of Victoria’s terrestrial plants, birds, reptiles, amphibians and mammals are considered threatened with extinction, according to the Department of Environment.

The Baw Baw frog burrows in moist mud and leaf litter along gully streams, feeding on worms and other invertebrates.

Like many other frog species, it has been affected by the chytrid fungus disease, which infects amphibians worldwide. 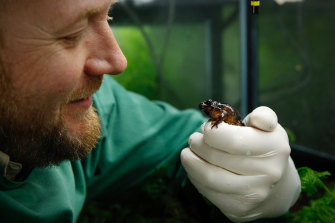 It causes sporadic deaths in some amphibian populations and 100 per cent mortality in others.

Melbourne Zoo amphibian specialist Damian Goodall has overseen the breeding and rearing of Baw Baw Frogs at the zoo's specialised facilities since 2011, when the first wild egg mass was collected.

The first release of adult frogs was a significant step to ensuring a wild future for the species, he said.

“It is certainly a huge achievement considering that just seven years ago when we started this project we didn’t know much about keeping and breeding these frogs.”

China comes to a standstill to mourn those killed by coronavirus