Home » World News » Robot waiters are here, so who gets the tips and what if the service is slow?

The robots patrol up and down the restaurant, dodging and weaving through tables and diners to drop off food as a digital voice chirps “enjoy your meal”.

Putting on a smile for the customers, a cute kitten face beams out from its touchscreen. In the machine’s belly are four wide trays, offering the ability to carry more plates than even the most experienced hospitality worker. 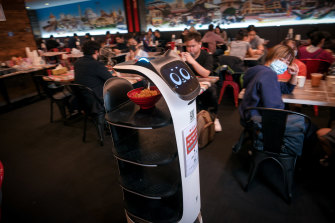 The robot waiter, Bellabot, in action at Dodde Paidang.Credit:Eddie Jim

Automated waiters are gliding in across Melbourne, with one city Thai restaurant introducing the Bellabot to help solve the problem of finding staff who left the industry after the COVID-19 lockdowns.

The Sunday Age visited Dodee Paidang in the CBD this week to put the Bellabot through its paces during a bustling Friday lunch service.

Once seated (by a human), we are directed to order our meal on a smartphone using a QR code, an increasingly common experience for any Melbourne restaurant goer who has been out during the reopening of hospitality.

At the end of the ordering process, just before payment is accepted, the website asks for a tip. Does the robot share in these, we wonder, as the credit card details are fed in. 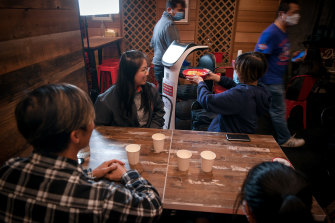 Soon after ordering, the robot makes its journey from the kitchen through the restaurant to table 17. The robot is programmed to move along a mapped route to each table, with lasers preventing it from bumping in to people along the way.

As the Bellabot arrives at the table it lights up and speaks to indicate that this is your food and that you should please take it. Once the plate is collected, patrons click the finish button on the robot’s touchscreen to send it back to base to ferry out another dish.

There are no questions possible of the robot, such as “where is the rest of my food?” Table 16 has this exact issue, with one person’s dish missing and the attention of a human staff member needed to check where it is.

Eventually, the pad thai arrives, however the Bellabot is blissfully unaware of any problems, having already moved on to ferrying someone else’s lunch. 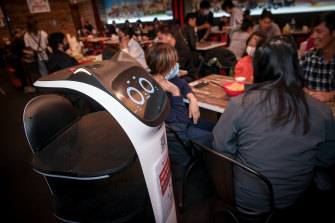 The robots deliver food, with other jobs left to human staff.Credit:Eddie Jim

The robots are not cheap, costing $24,000 to buy, although there is a rental option for $48 per robot per day (far less than the minimum wage). And while they are somewhat limited in what they can do, one thing they do bring is a novelty factor lapped up by smartphone camera-toting diners.

The rise of this AI workforce may have consequences for the future of industrial relations, however not all the jobs at Dodee Paidang have been taken over by robots.

There are still plenty of people doing the other tasks required to keep a busy food operation running, like ferrying drinks, wiping tables and clearing plates.

Dodee Paidang owner Boon Low said he needed to re-evaluate how his restaurant operated after it was badly affected by the lockdowns, which hurt CBD hospitality businesses more than most. 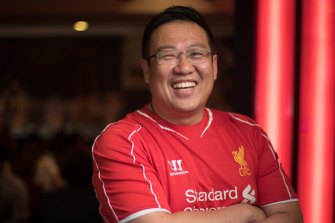 “Our restaurant is a volume restaurant, so it needs people because at the prices that we sell our food, we need volume to turn a profit,” he said.

Mr Low said the reason for introducing the robots was to allow staff to focus on more valuable tasks that need attention at his restaurant.

“We need to value people’s time more and more, we’re under a lot of pressure as a business to keep our prices stable or low and pay our staff well,” he said.

“People’s expectation of what they want to pay and what the actual cost is doesn’t normally equate.”

Innovation in the form of robot waiters was something that Mr Low expected to see more of in hospitality as owners look for ways to keep costs down.

If he could, he would bring in other robots to do similarly repetitive jobs like dishwashing or food prep, he said.

“It’s a better way for us to operate,” he said. “My main goal is to keep our prices down.”

Half of Britons planning a Christmas without friends or relatives

Kamala’s allies wonder anxiously: Will she have real clout?