The owner of a luxury Airbnb property in Hepburn has pleaded guilty to using a carriage device to harass a former guest who was told she would “burn in hell” after she left a review on a travel website saying his award-winning guesthouse was “Just OK”.

In the Moorabbin Magistrates’ Court this week, David Penman, 54, admitted sending a string of threatening emails to the woman in May last year, before leaving an expletive-laden tirade on her answering machine. 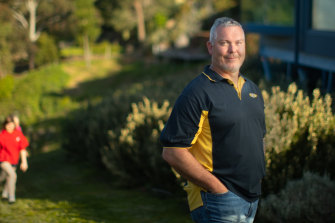 Penman, the owner of Clifftop at Hepburn – which claims on its website to have been “crowned No.1 from 55,000 rental homes” – was fined $2500 without a conviction.

However, the case has raised broader questions about the integrity of online review sites and the use of legal threats to muzzle the opinions of guests or consumers.

Media lawyer and partner with law firm Thomson Geer, Justin Quill said it was important when leaving an online review to make it clear that you are expressing an opinion and not stating a fact.

“The key to protecting yourself is to ensure that what you write is your honestly held opinion,” Quill said.

Penman’s luxury villas, which cost up to $699 per night, have won a swag of travel, hospitality and architectural accolades, including the nation’s best holiday home in 2020, according to the business’ Airbnb page.

Many of the awards, and Penman’s status as an “Airbnb superhost”, are determined by positive online reviews, which also help to generate bookings.

In the message he left the woman on May 1, 2021, Penman was heard saying: “You have greatly misjudged me. You obviously didn’t do your research about the defamation case on Google … don’t bother removing your review, don’t bother offering to settle. I’ll see you in f—ing court, you better have a lot of money. This is not over, we’re not accepting a payout. We’re going to f—ing court, and you will burn in hell.”

Penman’s barrister, Mihal Greener, told the court her client’s behaviour was “very much out of character”, and occurred at a time when his business was under significant strain from public health orders that restricted travel to regional Victoria during the pandemic.

Magistrate Luisa Bazzani described his conduct as “shocking, unfair and unnecessary”, but accepted that Penman was remorseful for his actions.

But emails, text messages and social media posts obtained by The Age reveal Penman previously threatened guests with defamation action, when they left reviews of less than five stars or made critical comments about his business.

On other occasions Penman contacted, or threatened to contact the employers of guests and warned that media publicity of his award-winning guesthouse could damage their corporate brand.

In May 2019, Penman sent a text message to an employee at a major bank, who left a two-star review after booking the romance package at Clifftop at Hepburn to propose to his partner. 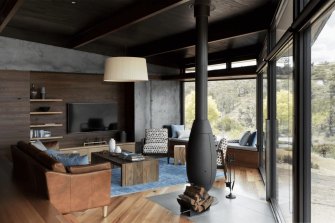 Clifftop at Hepburn is the property owned by David Penman at the centre of the court fracas.

“We have today received a complaint of possible domestic violence in your villa from another guest next door … We will consider this matter before deciding if it should be reported to the police,” Mr Penman said in the SMS exchange.

Penman then emailed several senior figures at the bank in May 2019.

“On May 11, 2019 (today by the time you are reading this), our accommodation will be featured on Postcards. Once that occurs many tens of thousands of people will Google us and a large number will see [his] review on Airbnb. He will be famous…in a way that generates a lot of attention for [the bank],” Penman said in the email.

In another email exchange, Penman threatened legal action against an employee of the Department of Education and Training, who was forced to cancel a reservation at Clifftop at Hepburn because she had been deployed to Gippsland following the bushfires in January 2020.

‘This is not over, we’re not accepting a payout. We’re going to f—ing court, and you will burn in hell.’

“Just a word of caution. We don’t tolerate reviews or social media comments from folks arising from situations like this. I will post our entire email chain publicly so that everyone can see what has occurred if any reviews whatsoever are written,” the customer was told.

Penman warned the woman he had recently reached a settlement in a defamation case against another guest who had left a negative review, and claimed the guest had incurred legal costs of more than $300,000.

“Our solicitor will be fully briefed on this matter today and given the way this matter is heading I propose to raise it with the Department of Education,” Penman said in an email in January 2020.

In May 2019, Penman was involved in another dispute with a guest who had complained in a review about a $100 cleaning bill and Penman’s strongarm legal tactics. 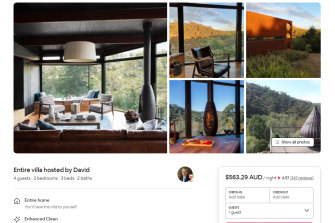 The Airbnb listing for Clifftop at Hepburn.

In a post that has since been removed, Penman accused the guest of trashing his guesthouse.

“You left our villa with milk over two windows, oats through the entire shower, food all over the floor and semen on the velvet daybed,” Penman posted.

Earlier this year, Penman was granted a diversion order in the Melbourne Magistrates’ Court after admitting to sending a barrage of threatening messages to Matthew Taylor in June 2021.

Taylor, who sells software to the construction industry, had claimed in a review on TripAdvisor that his booking had been abruptly cancelled following a minor dispute over the price of a second room.

The court heard, in one email, Penman wrote: “Tomorrow 25,000 people in Melbourne are going to know … what a scumbag you are”.

The court was also told that Penman contacted Taylor’s employer and attempted to have him fired, before threatening to release his private details on Facebook.

Penman did not respond to requests for comment from The Age.