Kyiv: Missiles rained down on Ukrainian energy facilities on Thursday as Russian forces stepped up attacks in eastern Ukraine, reinforced by troops pulled from Kherson city in the south which Kyiv recaptured last week.

Explosions resounded in cities including the capital Kyiv, the southern port of Odesa, the central city of Dnipro and the southeastern region of Zaporizhzhia. 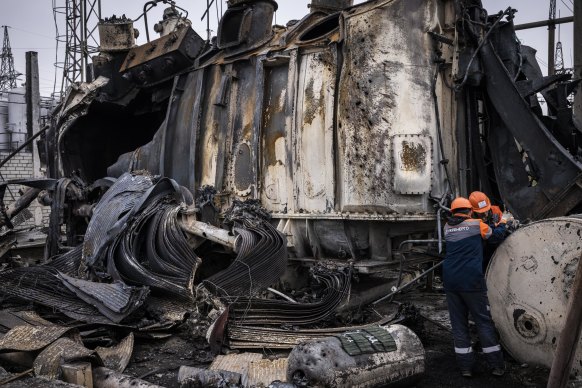 Workers dismantle an auto-transformer which stands completely destroyed after the Ukrenergo high voltage power substation was hit by a missile strike in central Ukraine.Credit:Getty

“Punishment for all Russian atrocities – both present and past – will be unavoidable,” President Volodymyr Zelensky wrote on Twitter, as news came that a Dutch court had ruled a passenger airliner shot down over eastern Ukraine in 2014 was hit by a Russian-made missile.

The court sentenced two former Russian intelligence agents and a Ukrainian separatist leader to life in prison for the downing of Malaysian Airlines Flight MH17 on July 17, 2014, killing all 298 passengers and crew.

A deal aimed at easing global food shortages by facilitating Ukraine’s agricultural exports from its southern Black Sea ports was extended for 120 days, though Moscow said its own demands had yet to be fully addressed. 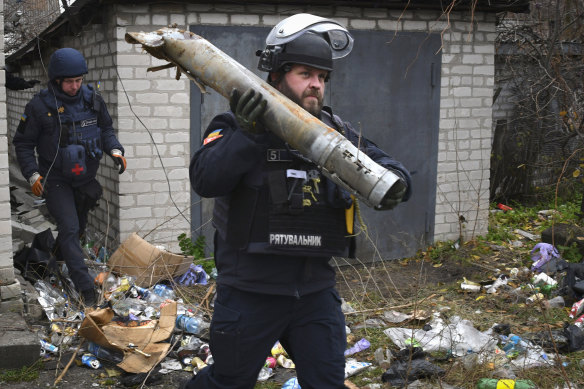 A Ukrainian sapper carries a part of a projectile during a demining operation in a residential area in Lyman, Donetsk region, Ukraine.Credit:AP

Officials reported heavy fighting in the eastern Donetsk and Luhansk regions, which Russia claims to have annexed along with the southern Kherson and Zaporizhzhia regions after holding what it called referendums condemned as a sham by Kyiv and the West.

Vladimir Rogov, a Russian-installed official in the Russian-controlled part of Zaporizhzhia, said a Ukrainian missile struck a village there, killing two people and wounding nine.

Moscow’s forces retreated from the city of Kherson last week after a Ukrainian counteroffensive. It was the only regional capital Russia had captured since its February 24 invasion, and the pullback was the third major Russian retreat of the war.

Ukrainian and Russian gunners on Thursday traded shellfire across the Dnipro River that bisects the Kherson region, the thumps echoing as a freezing rain drenched the city.

Investigators in recaptured territory in the area uncovered 63 bodies bearing signs of torture after Russian forces left, Ukraine’s interior minister was quoted as saying on Thursday.

Russia denies its troops target civilians or have committed atrocities. Mass burial sites have been found in other parts previously occupied by Russian troops, including some with civilian bodies showing signs of torture.

Kherson’s central square on Thursday was a frenetic melee of humanitarian aid queues and displays of patriotic celebration tinged with uncertainty about the future.

At one end, a man played the Ukrainian anthem on the accordion as bystanders sang along; a man strummed out popular Ukrainian rock songs on the other. Children and teenagers asked a soldier to sign flags draped around their shoulders. 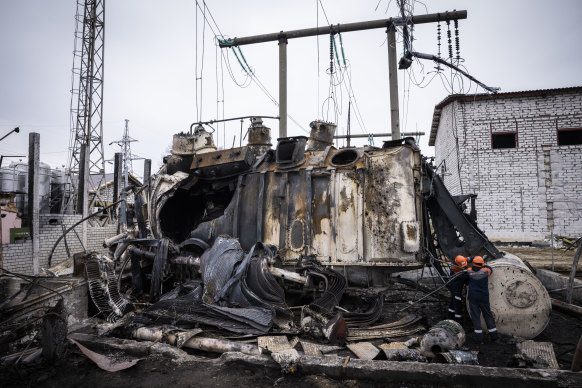 Electricity and heating outages across Ukraine caused by missile and drone strikes to energy infrastructure have added urgency to preparations for winter. Credit:Getty

Hundreds of people stood in a queue for humanitarian aid, but said they had no idea what they might receive.

“We’re fine, but we don’t know what to expect. Nothing is over yet. On that bank of the river, the forces are gathering. On this side, they are gathering. We are in the middle. I’m afraid we’ll end up like Mariupol,” said Ihor, 48, an unemployed builder, referring to the devastated Ukrainian city now in Russian hands.

As the winter’s first snow fell in Kyiv, authorities said they were working to restore power nationwide after Russia earlier this week unleashed what Ukraine said was the heaviest bombardment of civilian infrastructure of the nine-month war.

Zelensky posted video footage, apparently shot from a car cam, showing a huge blast in Dnipro that sent flames and black smoke pouring into the sky.

At least 15 people were wounded in Dnipro, three were hurt in the northeastern city of Kharkiv and at least one was injured in Odesa, officials said.

NATO and Poland concluded that a missile that crashed in Poland on Tuesday, killing two people, was probably a stray fired by Ukraine’s air defences and not Russian. Zelensky contested this view in a rare public disagreement with his Western allies.

Polish President Andrzej Duda said the missile, the war’s first deadly extension into NATO territory, appeared to be a Soviet-made S-300 rocket most likely fired accidentally “by Ukrainian anti-aircraft defence”, not by Russia. Russia and Ukraine both use the missile.

An adviser to Duda said Ukraine was likely to get access to the site of the blast that it has requested.

US President Joe Biden disputed Zelensky’s assertion that the missile was not Ukrainian, telling reporters at the White House on Thursday: “That’s not the evidence.”

Moscow had denied responsibility. Russia’s Foreign Ministry said accusations of Russian involvement in the blast were “part of a systematic anti-Russian campaign by the West”.

Winchester College will admit girls from 2022

Magical wedding of Philip and the Queen cheered post-war Britain