Sadiq Khan says Londoners have not had enough Covid jabs: Mayor calls on vaccine minister Nadhim Zahawi to act after capital gets just a tenth of doses despite making up 13% of UK population

The Mayor of London has complained that only a tenth of vaccines distributed across the UK have been given to people in the capital.

Sadiq Khan said he is ‘hugely concerned’ about the amount of Londoners who have been given the vaccine despite it making up 13% of UK population.

He called on vaccine minister Nadhim Zahawi to act as he announced he has repeatedly called on the Government to scale up the vaccine supply.

Mr Khan said will be tackling the issue with the government at a meeting set to be held later today.

The Mayor announced the news on his Twitter page amid rising coronavirus cases in the capital and across the UK.

Yesterday saw the death toll rise to 1,564 – the highest ever daily figure since the pandemic began – bringing the UK total death toll to 84,767.

In other coronavirus news: 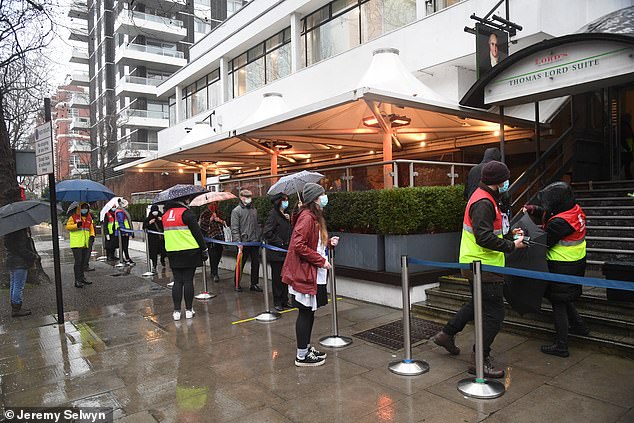 Sadiq Khan said only a tenth of Covid vaccines across the UK had been given to people living in the capital. Pictured: Vaccination Centre open today at Lords Cricket Ground 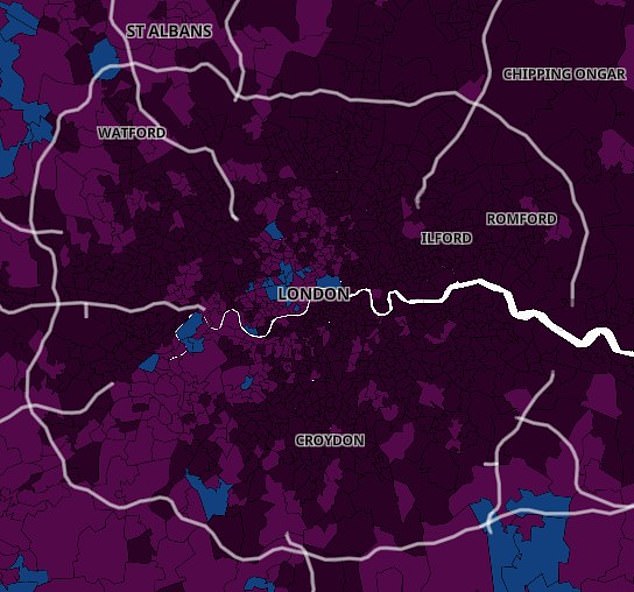 A further 10,020 Covid cases were reported in London on Wednesday, bringing the total number of people who have tested positive for the virus in the capital to 538,132. In the worst-hit boroughs, it is feared the rate could be as high as seven in every 1,000 people (pictured) 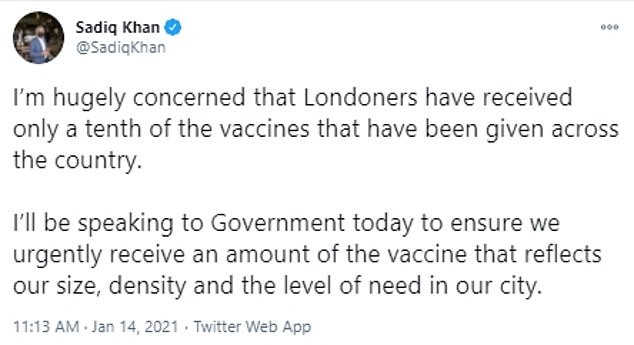 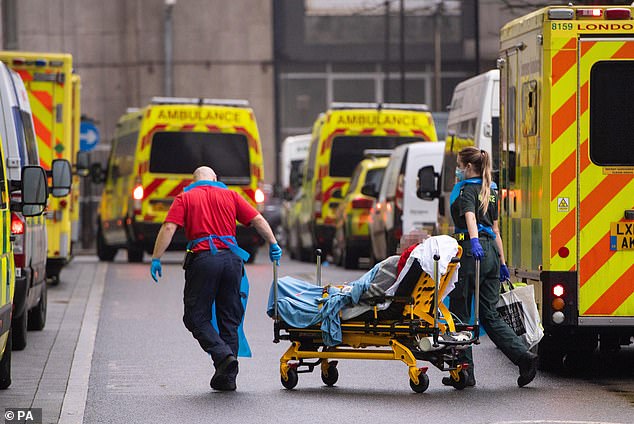 Mr Khan said: ‘I am hugely concerned that Londoners have received only a tenth of the vaccines that have been given across the country.

‘The situation in London is critical with rates of the virus extremely high, which is why it’s so important that vulnerable Londoners are given access to the vaccine as soon as possible.

‘I have repeatedly called on the Government to scale up the vaccine supply, and will be meeting the Minister for COVID Vaccine Deployment today to ensure that we urgently receive an amount of the vaccine that reflects our size, density and the level of need in our city.’ 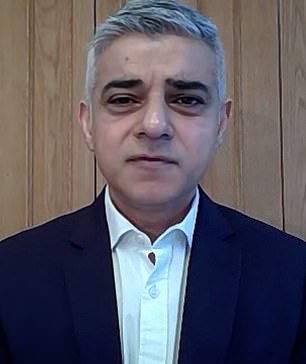 It comes days after the Mayor declared a ‘major incident’ in the capital as Covid cases continue to rise.

He said the spread of the virus ‘out of control.’

In the worst-hit boroughs, it is feared the rate could be as high as one in 20 people people with the virus.

A further 10,020 Covid cases were reported in London on Wednesday, bringing the total number of people who have tested positive for the virus in the capital to 538,132.

But there has been a drop in the number of hospital admissions, with 5,919 coronavirus patients admitted in a week.

As of Tuesday there were 7,606 Covid patients in London hospitals, with 1,085 of those patients being treated on ventilators.

While official NHS figures show 2,371,407 people have already been given a vaccine in England, according to statistics released by the National Immunisation Management Service.

The jabs are currently being distributed predominantly to people aged 80 and over who are deemed to be more vulnerable to the virus.

Care home residents and their carers, frontline health and social care workers are also being given prority. 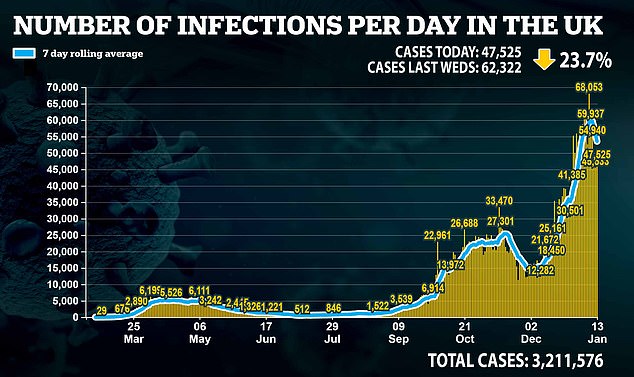 The Government said a further 1,564 people had died within 28 days of testing positive for Covid-19 as of Wednesday 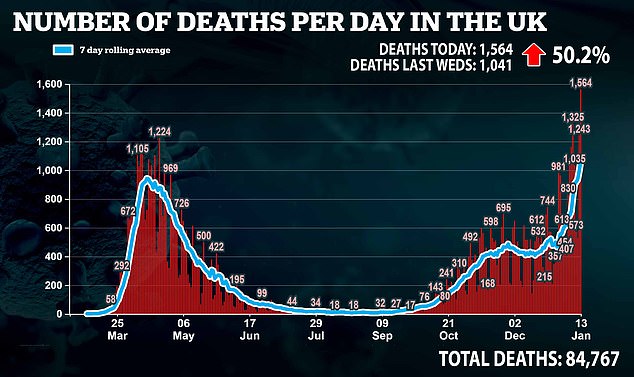 It marked the highest number of UK deaths reported on a single day since the outbreak began. It brings the UK total death toll to 84,767 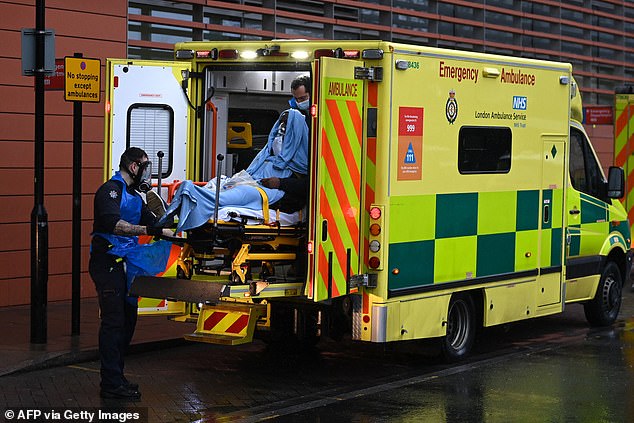 In the worst-hit London boroughs, the rate could be as high as seven in every 1,000 people, prompting fears London hospitals will be pushed to capacity. Pictured: A medic unloads a patient from an ambulance at the Royal London hospital in east London this morning 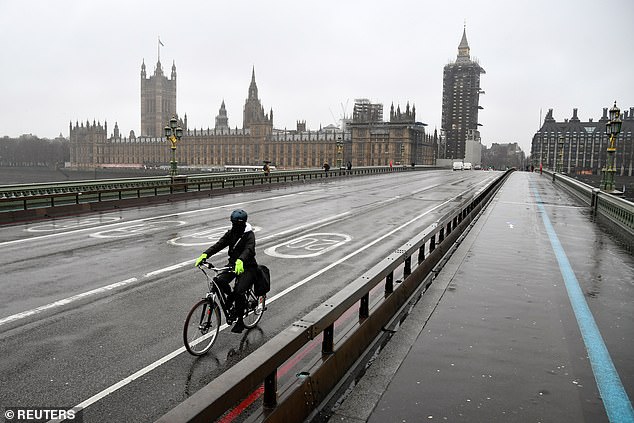 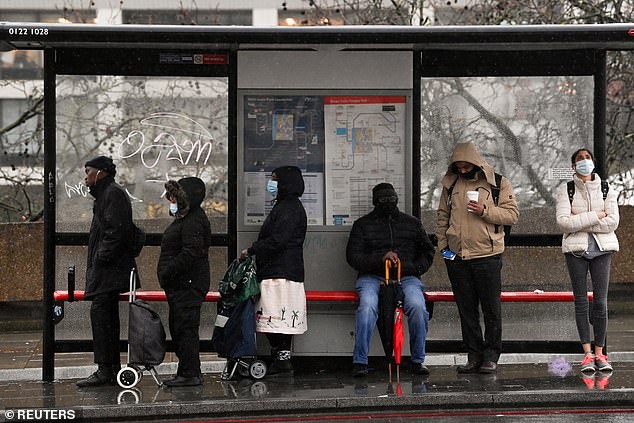 But in inner London, over 80s make up only 2.5% of the population, according to the Trust for London charity.

London’s population is also comparatively young compared to the rest of the country with the average age in the capital reaching 35.6, compared to 40.3 in the UK overall.

Her warning comes as the coronavirus death toll hit a new daily record of 1,564.

The Home Secretary hit out after police broke up several illegal raves last night including one held on a London roof-top as the UK recorded the highest number of Covid deaths since the pandemic began.

Officers in the capital were said to be ‘astounded’ after being called to break up a party at an industrial unit in Southwark last night, where they found at least 20 revellers on top of the building.

Appearing on ITV’s This Morning, Ms Patel said the government was not intending to make the lockdown tougher over the next few days – but she underlined that there will be harsher enforcement.

She said police were having to ‘break up some really dreadful situations where people are breaching the rules’.

‘It is important that we enforce these rules. Your viewers will see more police officers out and about,’ she said.

‘The rules are clear and the majority of the British public are following the rules.’

Pointing to the huge death toll yesterday, she said most people understood the need to ‘stop the spread of the virus’.

‘The police will continue to issue fines and enforce against people who are flagrantly breaching the rules,’ she said.

Despite the shocking figures, rule breakers continued to flout the restrictions.

Officers in the capital were said to be ‘astounded’ after being called to break up a party at an industrial unit in Southwark last night, where they found at least 20 revellers on top of the building.

Police were called out to reports of loud music coming from the roof by disgusted residents.

Many cheered the police on when they arrived to break up the illegal gathering on Pages Walk, Southwark.

Two people were arrested, including one individual on suspicion of carrying an offensive weapon, while another was arrested for suspected drug dealing.

A further five people were handed fines for breaching Covid restrictions before the party was fully dispersed around 11.30pm.

It led Home Secretary Priti Patel to hit out at those brazenly flouting the restrictions.

She warned police will continue to issue fines and enforce against people who are ‘flagrantly breaching the rules.’

It came as the Home Secretary confirmed the government was not intending to make the lockdown tougher over the next few days.

But the Mayor of London has called for tougher restrictions in a big to halt the virus’ spread.

Announcing the major incident in London last week, Mr Khan called for churches and other places of worship to be closed.

In a letter to Prime Minister Boris Johnson, he also demanded face masks be worn routinely outside of the home, including in supermarket queues and other places outside that may be crowded.

He also wants more financial support for Londoners who need to self-isolate and are unable to work, and for daily vaccination data.

In a statement Mr Khan said: ‘The situation in London is now critical with the spread of the virus out of control.’

Major incidents were declared in London after the Grenfell Tower disaster, the London Bridge and Westminster terror attacks, and the Croydon tram crash in November 2016.

Mother infected with coronavirus dies during labour at London hospital

'Bachelor' Fans Are Coming To Defend Victoria Larson From Matt James' Friend; 'I Can't Stand Victoria but This Is So Bad'