Schoolboy, 13, plunged ’40ft’ to his death through moss-covered skylight after group of friends clambered onto fragile warehouse roof, inquest hears

A schoolboy fell 40ft to his death after falling through a moss-covered skylight on the roof of a warehouse, an inquest heard.

Jethro Middleton, 13, was with friends when they climbed up and ran across the roof of a warehouse on an industrial estate in Okehampton, Devon in April 2022.

The young boy, known as Jet, plunged through a moss-covered skylight and onto the concrete floor below. 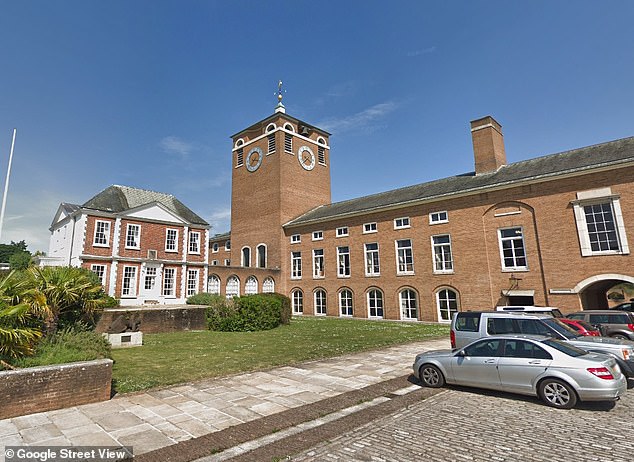 Exeter Coroner’s Court (pictured) heard that Jet had been with two friends, who cannot be named for legal reasons, and a dozen other teenagers when he fell through the roof

The inquest at Exeter Coroner’s Court heard that Jet had been with two friends, who cannot be named for legal reasons, and a dozen other teenagers.

They were all together near the warehouse and were bored. The teenagers then climbed a shed which led to scaffolding in place for ongoing repairs on the roof.

Exeter Coroner’s Court head that Jet then saw people and vehicles operating at the warehouse factory and decided to walk back across the roof.

Jet, who may have been looking at his phone at the time, was unable to distinguish between the skylight panels and the roof as it was covered in moss.

He then trod one of the plastic panels, with one boy saying he heard a ‘crack’. Jet plunged some 30-40ft to his death.

Two of the friends looked down the hole where he fell and could see him lying on the concrete floor. One boy said he nearly fell himself.

Coroner Philip Spinney said: ‘Whilst running across the roof area, a section of the roof broke and he fell through the roof to the concrete floor some 30-40 feet below.

‘Despite the efforts of police and paramedics he was pronounced deceased at the scene.’

The court heard that the teenagers had seen warning and danger signs after the tragic incident but would have not paid attention to them.

One boy said: ‘We just did it because it was scary and it was fun.’

Staff at the warehouse factory were then alerted by the group and emergency services were called.

A post-mortem confirmed that Jet died from an unsurvivable head injury.

Work was being carried out on the leaking warehouse roof, a Health and Safety report said. It added that the teenagers accessed the roof through the scaffolding.

Open letter to a protester and other commentary