Support for independence and Nicola Sturgeon’s leadership have plummeted in Scotland in the wake of the SNP civil war over Alex Salmond, a new poll reveals today.

A majority of Scots still support breaking up the United Kingdom, but its lead fell by 4 per cent to 52 per cent, according to a survey by Ipsos Mori for STV.

At the same time, Ms Sturgeon’s personal approval rating fell by 16 points to 32 per cent, among the ongoing turmoil involving sex abuse allegations made against her predecessor.

The First Minister was told today by one of her own MSPs that she and other senior figures in the party would have to step down if Mr Salmond can show he has been the victim of a ‘stitch up’.

Mr Salmond was cleared last March of all sexual assault charges and his supporters demanded a full inquiry into the Scottish Government’s handling of the scandal.

The fallout has seen him and his supporters line up against Ms Sturgeon and her allies, with a knock-on effect on support for the nationalist party.

More than a third (36 per cent) of those polled said that the row had made them think less favourably towards the SNP, including more than a fifth of those who voted for the party at the last general election.

However, Ms Sturgeon’s party still retains the numbers to seal an overall majority at Holyrood elections in May – if the furious argument does not blow any deeper chasms in party ranks. 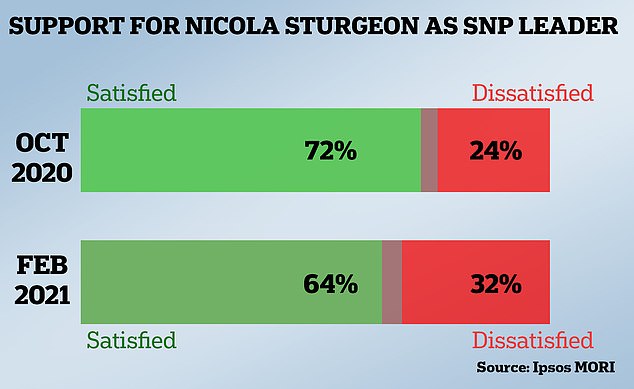 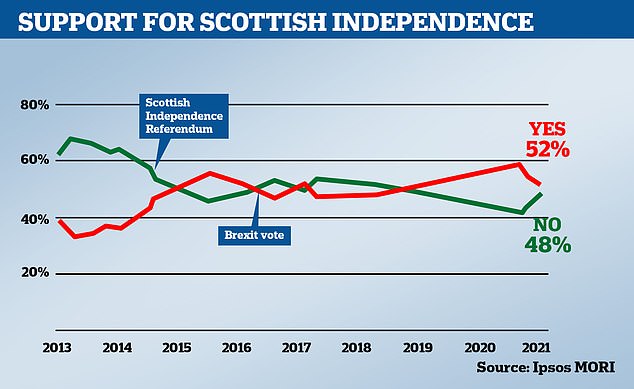 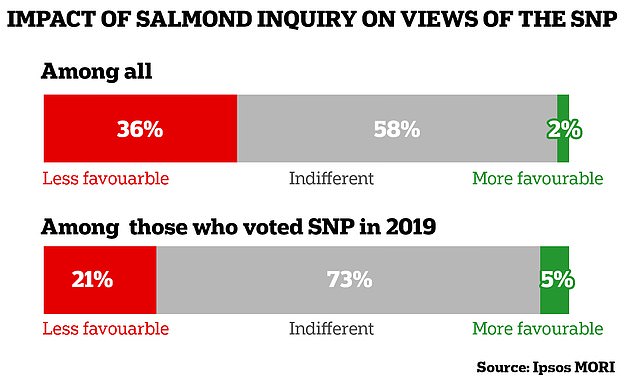 Allegations, discussions, denials and a ‘forgotten’ key meeting between Sturgeon and Salmond

November 2017: Allegations regarding Alex Salmond’s behaviour are raised with the SNP by Sky News.

Nicola Sturgeon said she spoke to him about this – and he ‘denied it’. No further action was taken.

March 29, 2018: Ms Sturgeon meets Geoff Aberdein – Mr Salmon’s chief of staff – in her Scottish parliament office where she has admitted they discussed the possibility of a meeting with Mr Salmond. Ms Sturgeon – after initially forgetting about this meeting – says there was ‘the suggestion that the matter might relate to allegations of a sexual nature’.

April 2, 2018: Ms Sturgeon and Mr Salmond meet at the First Minister’s home. According to Ms Sturgeon, this is the first time she heard of the complaints made against him. Despite this, she has insisted that the matters discussed were party business.

September 14, 2018: A judicial review is launched after complaints by Mr Salmond over the fairness with how the claims against him were handled.

January 8, 2019: The Scottish government conceded defeat in the judicial review a week before it was due to launch. Mr Salmond wins £500,000 in legal fees. The court ruled the probe into Mr Salmond had been unlawful and tainted by apparent bias.

January 2019: Ms Sturgeon tells MSPs that Mr Salmond first told her about a probe into him on April 2.

March 23, 2020: Alex Salmond is cleared of all sexual assault charges and his supporters demanded a full inquiry into the Scottish Government’s handling of the scandal.

January 24, 2021: Speaking on the Andrew Marr show, Ms Sturgeon denies misleading the Scottish Parliament after ‘forgetting’ to tell MSPs about her meeting with Mr Salmond’s aide on March 29, 2018.

February 2021: The High Court in Edinburgh rules Mr Salmond’s evidence claiming his former chief of staff met with Ms Sturgeon on March 28, 2018, to discuss sexual assault allegations against the former first minister can be released.

Emily Gray, the managing director of Ipsos Mori Scotland, said: ‘This latest poll from Ipsos MORI and STV News shows a fall in support for independence, and a corresponding increase in support for staying in the Union – though Yes still has a four-point lead over No.

‘That’s important for Scotland’s political parties, since independence is the top issue voters say will help them make up their minds about which party to vote for in May’s Holyrood elections.

‘At this point the SNP look on course to win a majority of seats, but the next few weeks are set to be challenging for the party, with the Salmond inquiry ongoing – and our poll shows that this issue has started to cut through with Scottish voters.’

The Salmond row currently centers on a decision to redact part of his long-awaited evidence to a Holyrood committee.

Ms Sturgeon yesterday accused Mr Salmond of spreading a ‘dangerous conspiracy theory’ after her government censored his testimony accusing her of lying to the Scottish Parliament.

The First Minister said her former political mentor now preferred ‘creating an alternative reality’ in which the ‘organs of the state… were all part of some wild conspiracy’ against him.

She also denied having any influence over the Crown Office’s decision to request that his statement be redacted as her government faces growing accusations of corruption.

Mr Salmond is now understood to have agreed to appear before the inquiry tomorrow after pulling out of yesterday’s hearing over fears that the censorship of his testimony would prevent him from accusing Ms Sturgeon of lying.

Civil servants have so far refused to explain why they redacted the most explosive 474 words of Mr Salmond’s testimony that could force the SNP leader to resign.

Politicians said the separation of power between prosecutors, the civil service and the SNP had become ‘indistinguishable’ and Scotland’s public institutions were allowing themselves to be used for political purposes.

SNP MP Alex Neil told BBC Radio 4’s Today programme that Mr Salmond ‘believes that there was a conspiracy to get him’.

He said: ‘Initially I think he thinks it started off as an attempt to keep him out of public life and not allow him back into the Scottish Parliament after he lost his Westminster seat.

Mr Neil said the redacted evidence matters because Mr Salmond ‘believes that that is fundamental to his allegations against the Scottish Government and the people who he believes tried to do him down’.

It came as Downing Street rejected a suggestion that the creation of a new Cabinet committee on the Union led by the Prime Minister was a sign of ‘confusion and panic’. 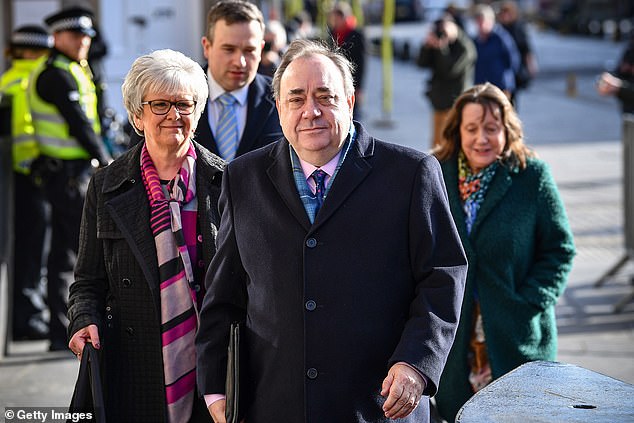 The fury is focused on a decision by the Scottish Parliament to redact Mr Salmond’s written testimony against Ms Sturgeon after a request from prosecutors at the Crown Office – just a day before he was due to give evidence to an inquiry in person. Pictured: Mr Salmond in March

The committee was set up after Oliver Lewis left his position as the head of Downing Street’s Union unit last week.

Mr Lewis, a veteran of the Vote Leave campaign, had been in the job for less than a fortnight and had replaced former Scottish MP Luke Graham.

The SNP say the changes show the UK Government’s campaign against Scottish independence is in ‘disarray’.

But the Prime Minister’s official spokesman said: ‘No, I think it demonstrates our commitment to the Union and the focus the PM has on ensuring that we deliver for all countries of the United Kingdom.’

The spokesman said that No 10 officials would continue to work in the Union unit, but the new Union strategy committee would build on existing structures.

‘We have the Union policy implementation committee also which is chaired by CDL (Chancellor of the Duchy of Lancaster Michael Gove) which will also meet more regularly,’ the spokesman told reporters.

‘The Union policy implementation committee is chaired by CDL and that will have officials and other ministers attending as required, they will obviously implement the policy that’s decided at the PM-led Union strategy committee.

Trump’s acquittal will, at long last, bring an end to the 2016 election